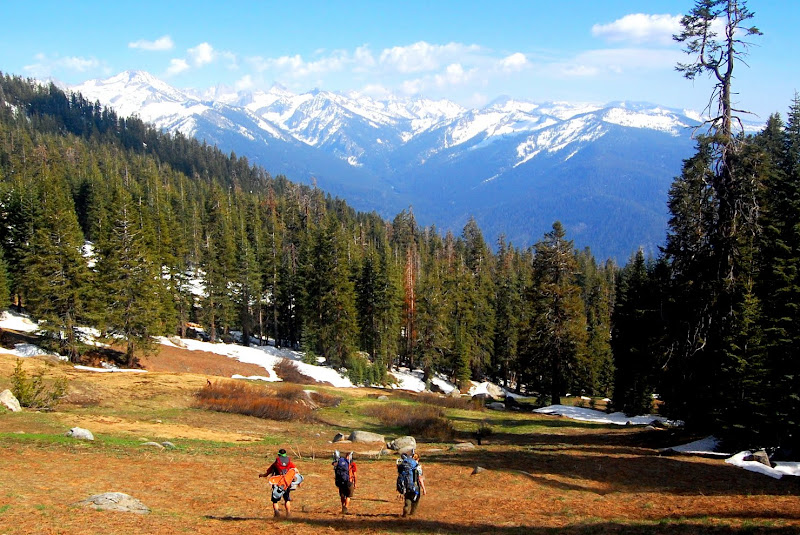 As an instructor for Stanford’s Outdoor Education Program, I led an introductory mountaineering trip to 11,204 foot Alta Peak in Sequoia National Park during May of 2008. We left the Bay Area at around 7:30 PM on Friday evening, and drove all the way to the park that night. We camped at Lodgepole, a front country campsite with a visitor center, market, flush toilets, and showers.

The next morning, we woke up, broke camp, and drove to the trailhead. At about 7,200 feet, the trailhead was low enough that there was no snow. However, the rangers had told us that snowshoes—and potentially crampons and ice axes—would be necessary for the climb. Due to these reports, we strapped snowshoes and a few ice axes to our packs and started up the trail. 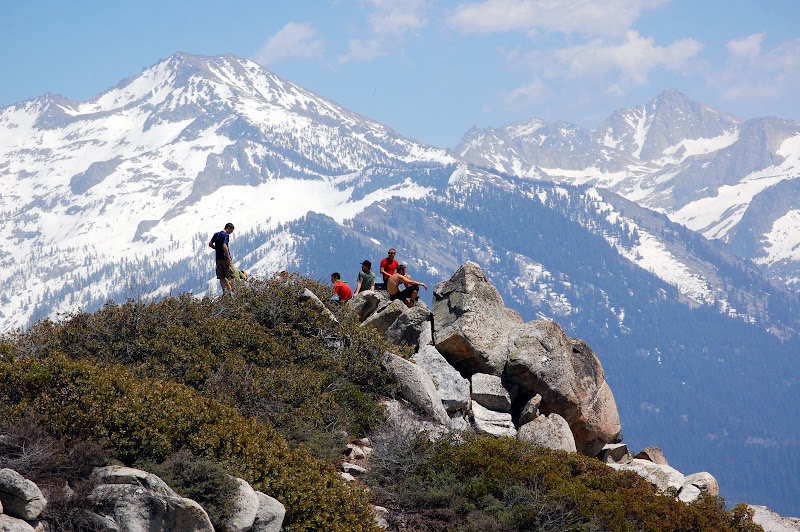 For the first mile or so, the trail was very well-defined and mostly snow-free. There were a few small patches of snow over parts of the trail, but they were easy to traverse in our boots. As we climbed higher and the trail drew closer to Wolverton Creek, the snow grew plentiful. We followed a path of footprints that followed the creek south and east. After crossing a snow-covered meadow, we began a steep climb to Panther Gap at about 8,500 feet. 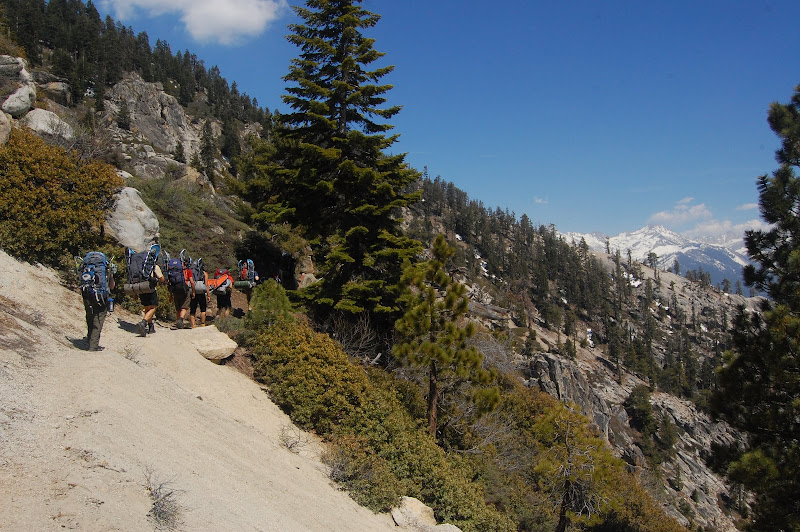 Panther Gap boasts an incredible view southward into the mountains. On the south-facing side, there was no snow at all. It was a convenient stopping point, so we broke for lunch and took in the views. Then we continued along the Alta Peak trail to Mehrten Meadow, where we had planned to camp for the night. The meadow had recently been exposed by the melting snow. It had plenty of water, but the tall trees surrounding the meadow mostly blocked the view of the nearby scenery. Unfortunately, Mehrten Meadow was packed with other campers. We decided to continue up the trail and search for another campsite.

About half a mile beyond the meadow, we spotted an open patch below the trail. We hiked down to it and found a gorgeous meadow bisected by a gurgling brook. Unlike Mehrten Meadow, this unnamed meadow was open enough to offer incredible views of the high peaks. We all agreed that this was an excellent campsite.

After making camp, we explored the nearby area and found a few other equally beautiful meadows. I taught a self-arrest clinic with one of my co-instructors, Chris, on a small snow-covered hill east of our campsite. Wet and tired but exhilarated, we returned to camp for dinner. We made plans for the morning, watched a stunning sunset over the mountains, and drifted off to sleep under the stars. 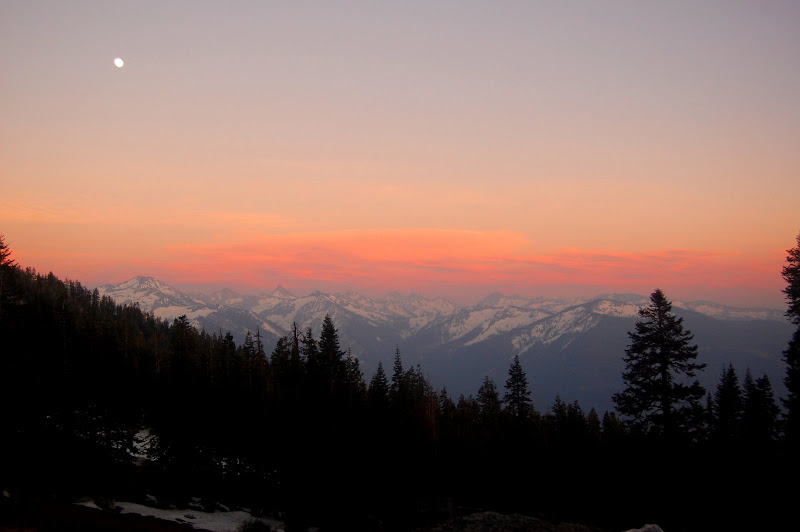 Sunset from our campsite

At six the next morning we woke up and had breakfast. Everyone put together a summit pack with layers, water, sunscreen, and snacks. I conferred with the other instructors, and we decided that the light snow cover we’d seen so far meant that snowshoes would be unnecessary hindrances on our summit attempt. Leaving the snowshoes at camp, we set off for the top.

Even though the snow cover was light, it was enough to obscure the trail. The route was fairly obvious, however, and we swung around Tharp’s Rock, a 10,600-foot tower south of Alta Peak. We began ascending a shallow, snow-filled couloir. At about 10,500 feet, we decided that the heavy, wet snow made travel difficult enough that it would be faster and safer to climb the exposed rocky ridge that bracketed its northern side. 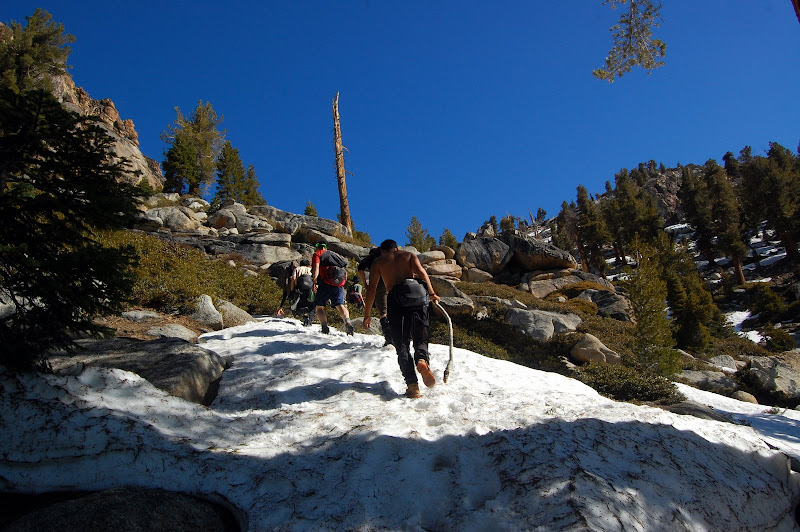 Hiking to the summit

The ridge proved a straightforward class 2/3 scramble. By 10:30 there was nowhere higher to go. We high-fived at the USGS marker, signed the register, and looked around at the incredible views in every direction from the summit. It was a beautiful, clear day with a slight breeze, and we could see the high Sierra laid out all around us. 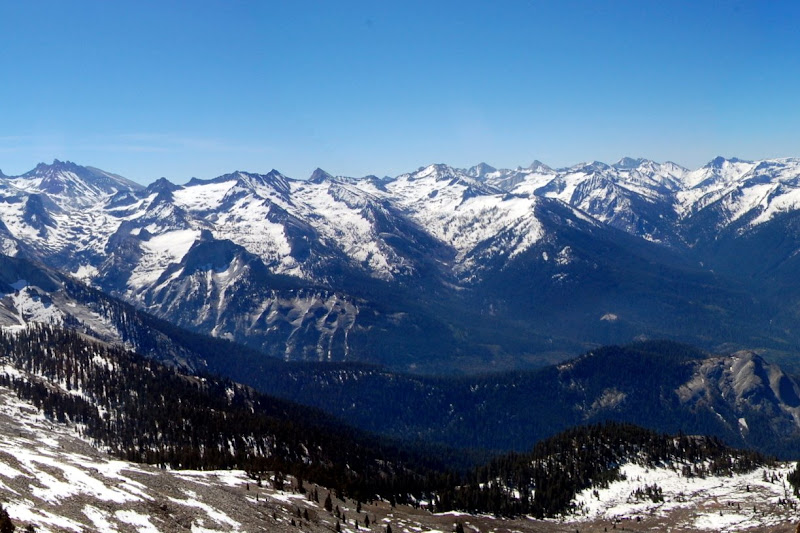 The view from the summit

We stayed on the summit for half an hour or so, chatting and eating. We began our descent by glissading down the couloir we had eschewed earlier. We dropped about a thousand feet in the first half hour. By one in the afternoon, we were back at camp. We had another snack, took a long break, and then loaded our packs and began the hike back.

It took us about three hours to trace our path back to Panther Gap and then down through the meadow and back to the parking lot, which we reached just before four. On the way out of the park, we stopped at the General Sherman tree, a giant sequoia, and arguably the largest living organism on the planet. Piling into our cars, we hit the road for the long drive home.