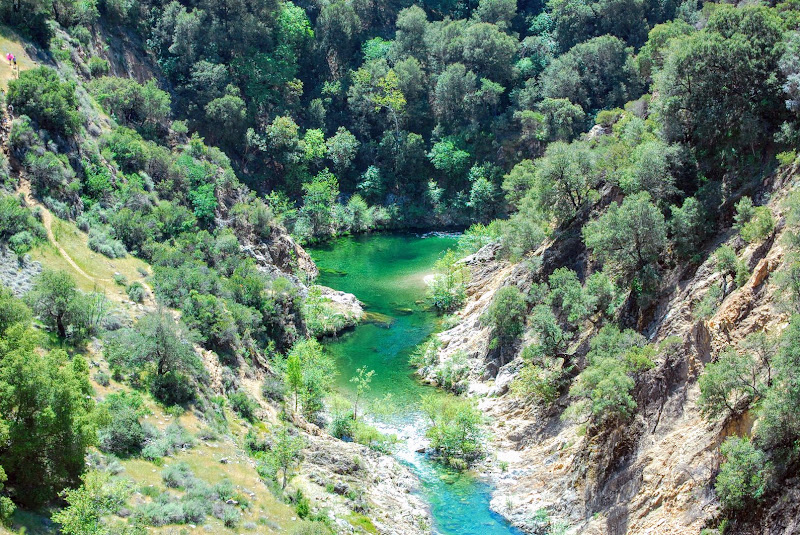 Every quarter, the instructors of the Stanford Outdoor Education Program (OEP) go on a retreat to refine skills and plan trips and lessons. For our Spring 2008 retreat, we took advantage of a spell of hot weather to brave the cold, swift waters of Arroyo Seco, a gorgeous canyon east of Big Sur. Not only is Arroyo Seco beautiful, but it’s much closer to campus than the Sierras, so it made for a short and easy drive. 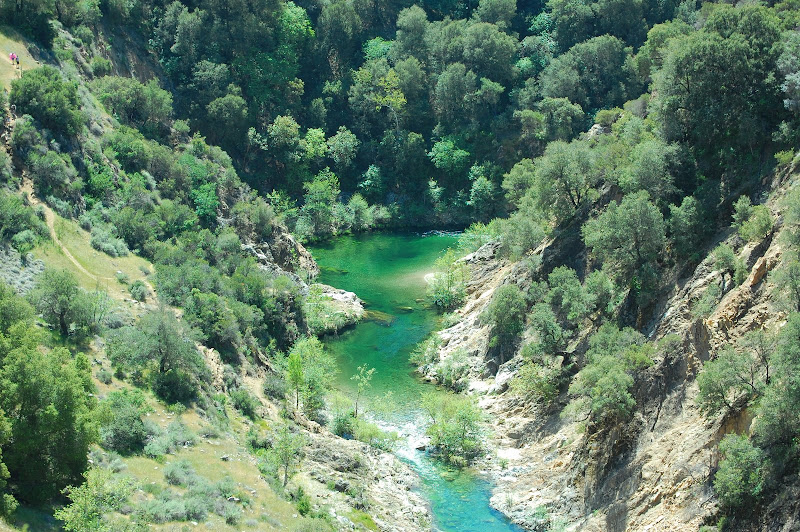 We reached the trail head in midmorning, slung on our packs, and started hiking. For the first three miles, the trail is a wide dirt road that winds around above the canyon floor. The views were great, but the temperature was already in the mid-80s. At the three mile mark, we took the Marble Creek trail, a much smaller, but still very well-defined tributary to the main road. The trail dropped quickly towards the canyon floor.

Crossing a suspension bridge, we made our way down to a beach on the opposite side of the canyon. We broke for lunch, and a few of us braved the cold waters of the creek. Near the beach, the water was very still and very cold, but it was a nice break from the sun’s oppressive heat.

After lunch, we hiked another mile or so up the trail. The trail became progressively less distinct and overgrown with poison oak. We stopped at the first campsite we reached, which was situated next to a gorgeous meadow near the creek. Dropping our packs, we walked down to the creek and spent most of the afternoon playing in the water and sunbathing on the rocks. 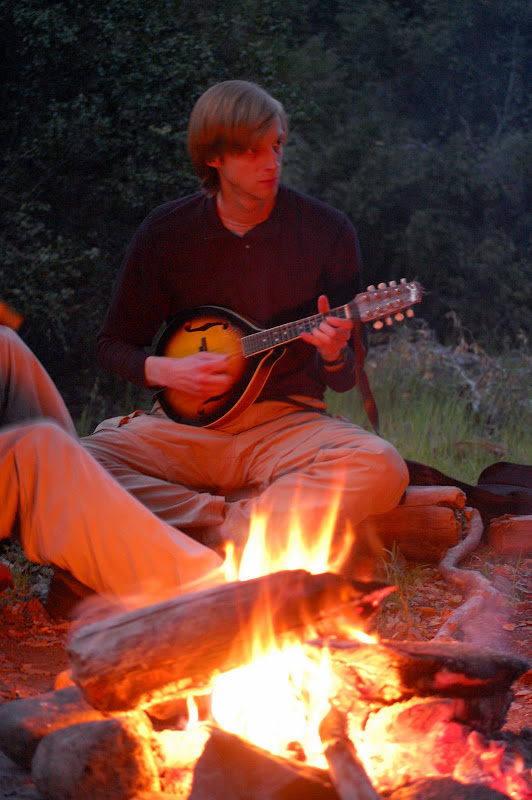 Sitting around the campfire

For the rest of the afternoon, we discussed the future of our program and worked on planning our trips and lessons. Around 6:30 we made a dinner of burritos. Because we were on Forest Service land, campfires were allowed, and we were soon settled around a merry blaze. Matt got out a mandolin and played some music. We countinued our discussion of OEP’s goals, and started talking about our personal goals as instructors. As the discussion wound down and the fire burnt down to its embers, we drifted off to sleep. 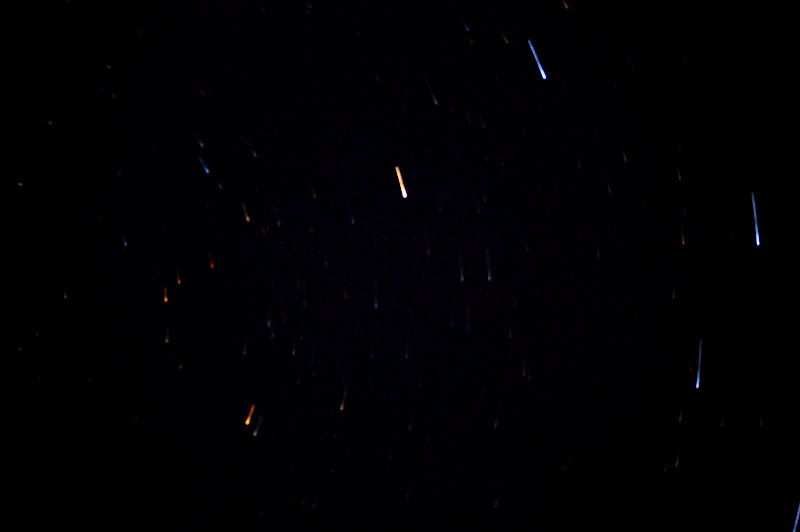 The night sky above Arroyo Seco

We woke the next morning to another beautiful but hot day. After a breakfast of oatmeal, we broke camp and hiked back to the suspension bridge. Near the bridge we stashed wetsuits, life jackets, lunch food, and a small inflatable raft. Then we shuttled our packs two miles down the trail and stashed them near an exit from the canyon. We left our packs and returned to the bridge, where we ate lunch before donning our wetsuits and life jackets and beginning an epic canyoneering adventure.

The water was cold, but not so cold that wetsuits were absolutely necessary. We just used them so that we could stay in the water as long as we wanted without worrying. Alternately floating lazily, clambering over the rocky shores, and running rapids in the raft, we made our way down the river.

For the most part, the river was very mellow. When the water levels are very high, some of the rapids are class IV, but the water level was very low (70 cfs), about half of the minimum required for kayaking. As a result, the rapids were short and fairly gentle, and we surfed most of them without a raft. In two or three places the rapids were too rough to run safely, so we exited the water and hiked along the river bank. 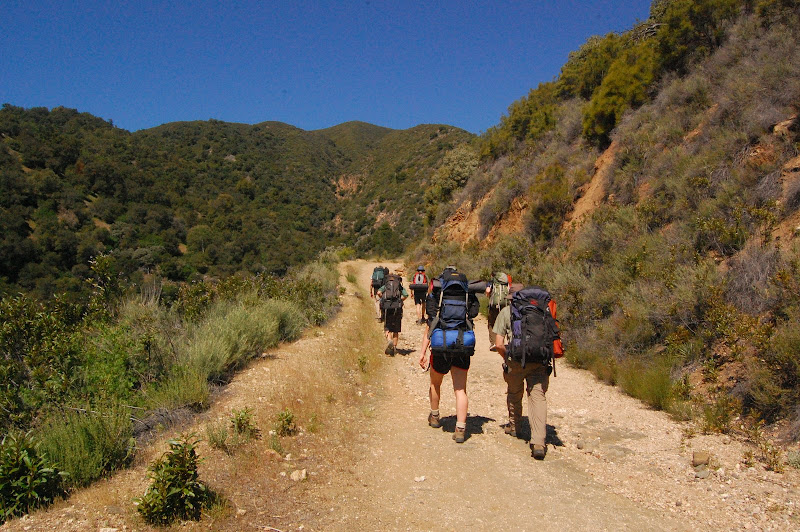 Hiking back to the trail head

About halfway to our exit point, a group of people had strung a slack line across the canyon about twenty-five feet above the water. We watched them walk the slack line, and a few of us climbed up above the line, where there was an excellent diving rock. Leaving the slack line behind, we continued moseying down the river.

Towards the end of our river run, the canyon narrowed significantly. For one short stretch, the cliffs on both sides fell straight into the water, and the canyon was no more than five or six feet wide. Fortunately there were no rapids through that stretch and thus no need to leave the water. 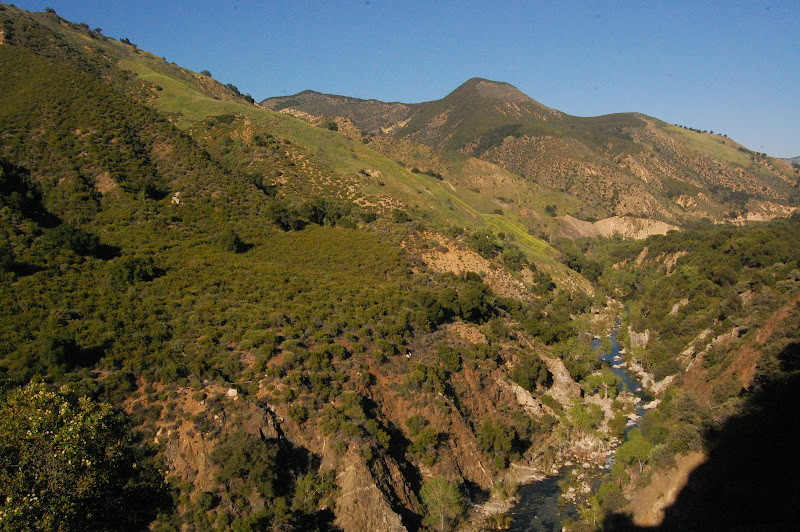 A short while later, we reached the exit point where we’d stashed our packs. We hiked out of the canyon and returned to our packs. After a few minutes drying off, we put on our packs for the last time and hiked the last mile back to the trail head.