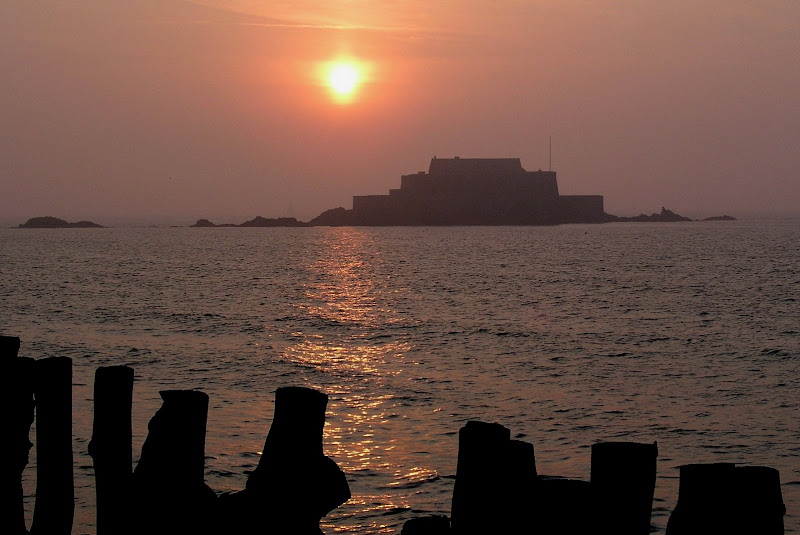 The summer after my freshman year of high school, I spent three weeks at the Cambridge College Program, an opportunity for high school students around the globe to live at Cambridge University and take classes from Cambridge professors. I took two courses, one in astrophysics and one in debate. The courses were fascinating, and both of my professors were extremely knowledgeable, gifted teachers. But in addition to taking these classes, I was looking forward to the opportunity to explore Europe, a continent I had never seen before.

Cambridge is a small town that almost seems stuck in the Middle Ages. Cobbled streets and ancient buildings clash with automobiles and fast food restaurants. A covered market sells everything from food to clothes to electronics. I was living in Sidney Sussex college, which was founded in 1596 and counted Oliver Cromwell as one of its students. It was fun to explore the ancient corridors and courtyards of the English-speaking world’s second-oldest university. I had ample time to explore the town, as the university’s dining center was a long walk across Cambridge from Sidney Sussex. It was our only option for dinner food, and cooking was awful. But despite the bad food, I enjoyed walking the streets of Cambridge and soaking in the history of that ancient center of learning.

Every weekend, we took trips, usually to London. We visited the British Museum and were awed by its impressive and impossibly immense display of ancient artifacts and artwork. We saw two plays in London, The Lion King and Henrik Ibsen’s Brand. We saw Piccadilly Circus, Nelson’s Column, Buckingham Palace, and Ely Cathedral. On one particularly memorable trip, we visited Stonehenge, one of the most intriguing ancient sites I’ve ever seen. 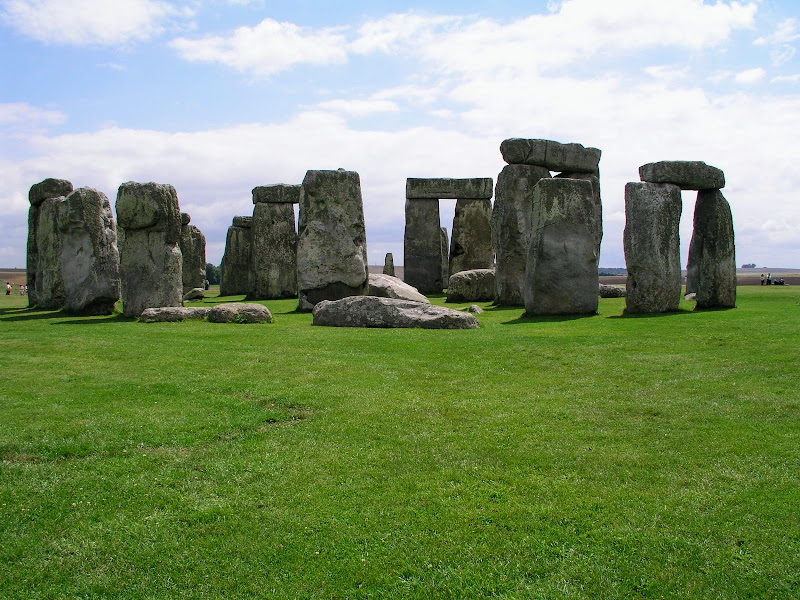 One of my favorite trips to London included a tour of the Cabinet War Rooms. These were heavily-armored bunkers under the streets of London where Winston Churchill and his cabinet met and lived during the Battle of Britain. Expertly preserved, the War Rooms are complete with models of the people who lived and worked in them. We saw the rooms where Churchill slept and where his generals planned their responses to the Axis advance.

All in all, my experience at Cambridge was a good one. I enjoyed my classes and loved exploring England. I was lucky enough to meet and have a question and answer session with Martin Rees, a famous British astronomer. At the end of the three week program, my parents picked me up in Cambridge, and we began the next leg of our European adventure.

We left Cambridge and spent a night in London. The next day, we took the Eurostar to Paris. It was the beginning of a devastating heat wave in Europe, and the train tracks were so hot that they had expanded enough to make it unsafe for the train to travel at top speed until we were well outside of London. We arrived in Paris to be greeted by sweltering heat.

In Paris, we stayed in an apartment with an excellent view of the Eiffel Tower. The apartment didn’t have air conditioning, so we requisitioned all the fans we could possibly find and slept with the least amount of bedding possible. During the days, we tried to find places to go that had air conditioning; we visited the Louvre and Musee d’Orsay, both of which had astounding collections and were blessedly cool. We also took a tour of Paris’s sewers, which was also comfortably cool but not particularly interesting. 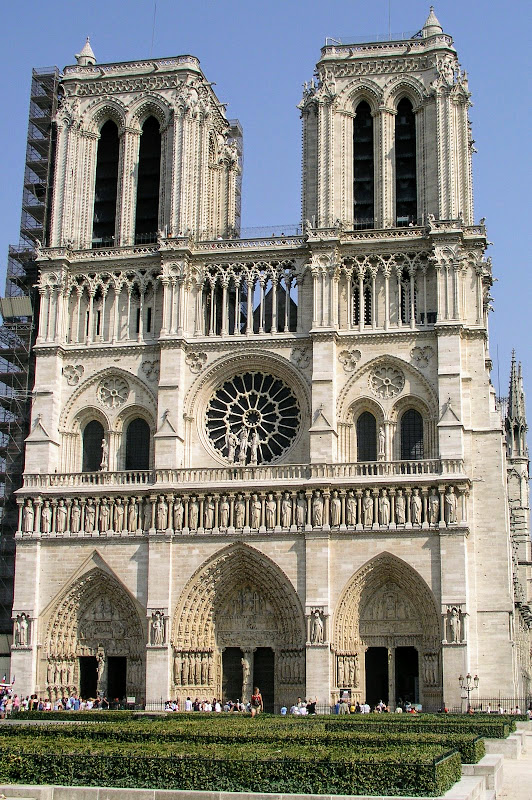 On the day we decided to visit Notre Dame, there was a long line that wrapped all the way around the side of the ancient cathedral. We finally began climbing its many steps, and were rewarded with an incredible view of Paris spread out beneath us. After a short while on the top of Notre Dame, we returned to the ground and cooled off with delicious Parisian ice cream. 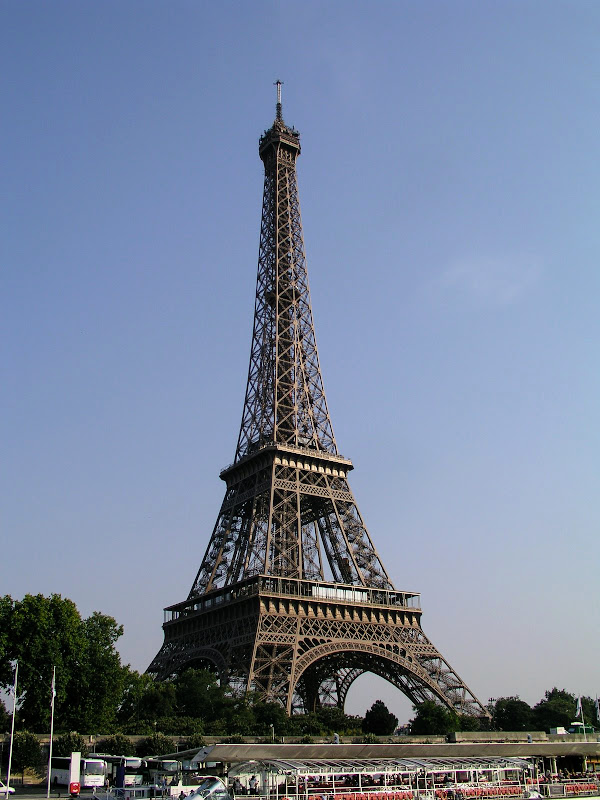 During the rest of our time in Paris, we visited other famous tourist attractions, like the Eiffel Tower and the Arc de Triomphe. We climbed the Arc at night to see a beautiful view of the lights of the Champs d Elysees. In our quest to avoid the heat, we had dinner in a wonderful restaurant in the basement of an old building, where we met my friend Ana and her family, who were also visiting Paris.

After several days in Paris, we needed a break from the city and its stifling heat. We drove a few hours to Saint-Malo, a medieval fortified city in Brittany on the English Channel. In addition to the old buildings of the walled city, Saint-Malo boasts a picturesque fortress on a spur of land that juts out into the sea. When the tide rolls in, the spur of land stretching out to the fortress is completely covered by water, and the fortress becomes an island until low tide. 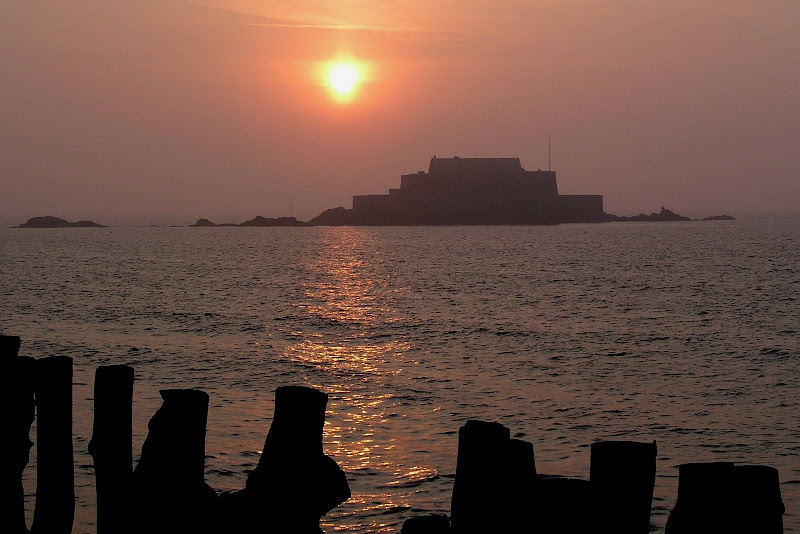 The fortress at Saint-Malo

My father, who had visited Saint-Malo when he was in college, remembered that there was a street named Rue du Pourquoi-Pas, “The street of why not.” We searched the city until we found it, and my dad had me take a picture of him next to the street sign. We had a great time at Saint-Malo, playing on the beach, and exploring the ancient city. We watched a spectacular sunset over the ocean and then returned to Paris.

A few days before the end of our stay in Paris, we managed to get a portable air conditioning unit for our apartment, which took a little of the bite off of the heat wave. At the end of our stay, we took the Eurostar back to London, where we spent the night in an airport hotel before flying back home.