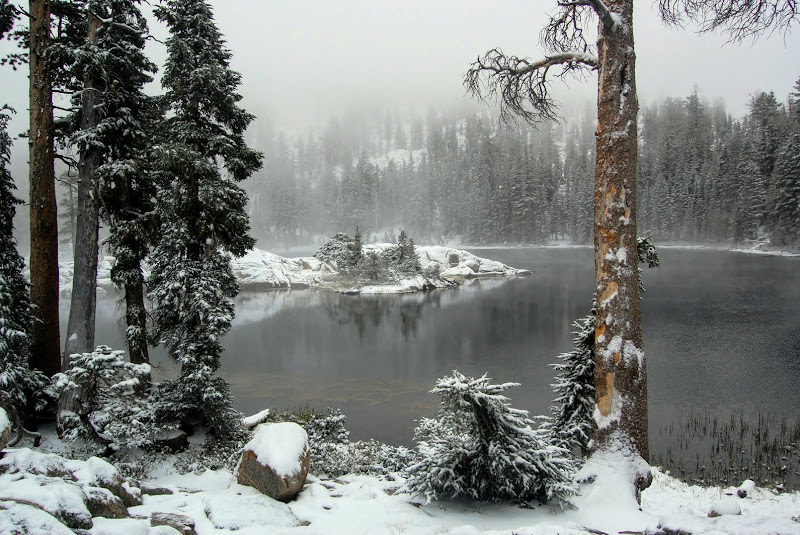 About thirty miles south of Lake Tahoe and thirty miles north of Yosemite, the Carson Iceberg Wilderness is a little known gem in California’s high country. Just beyond Bear Valley on Highway 4, the wilderness is past the point at which the road is maintained in winter, making access impossible after the first heavy snows of winter. I led an introductory backpacking trip to Carson Iceberg just before the beginning of the winter season. 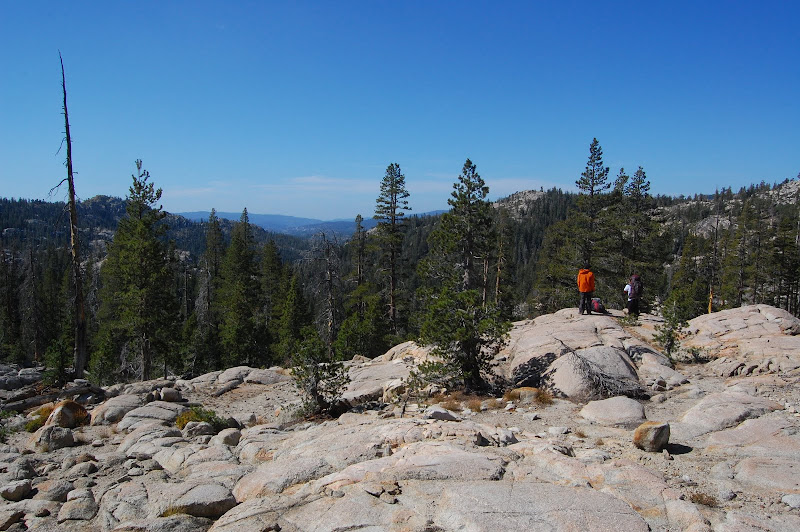 Our group of three instructors and twelve students left the Stanford Campus a little after 8PM on a Friday night. We drove four hours to the Mosquito Lakes Trailhead, stopping en route at the ranger station in Hathaway Pines to pick up our permit. Highway 4 is one of the most barren roads I’ve driven on— the towns are tiny and far between, and the huge farms that hug the road are mostly devoid of buildings.

We camped that night at the Mosquito Lakes campground. I slept outside under a beautiful starry sky. The night was a little cold and a little cloudy, but Saturday dawned sunny. We ate a breakfast of granola, and then we packed our bags. We were on the trail by 10 AM.

The trail winds south from Mosquito Lake, climbing a steep ridge that abuts the lake’s southern shore. We stopped near the top of the ridge to discuss the route. After the initial climb, the route flattened out a little. A mile and a half or so in, we spotted a spectacular overlook to the west of the trail. We took a break and admired the rolling granite cliffs dotted with pines and firs. 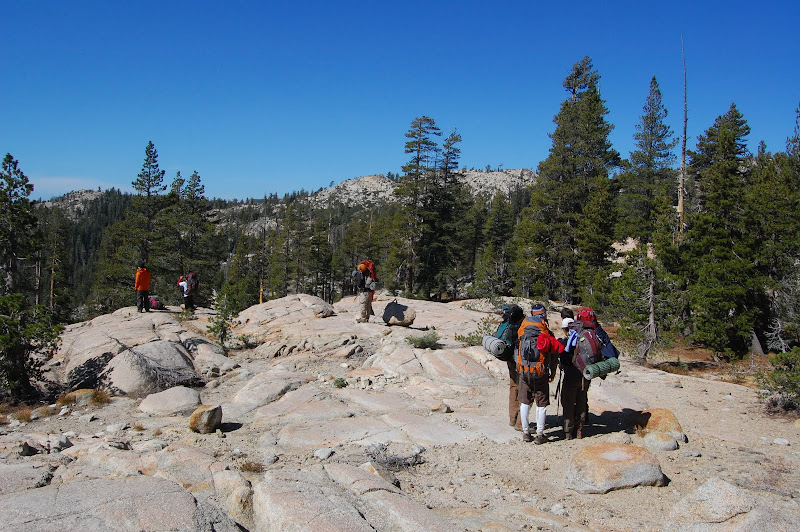 The hike to Bull Run Lake from Mosquito Lake is less than 5 miles with only a few hundred feet of net elevation gain, but it does climb up and down a bit. We moved fairly quickly, and we only saw three other people, all of who were day hikers. By 2 o’clock we had reached Bull Run Lake, a beautiful medium-sized lake with a large rocky island near its northern shore. 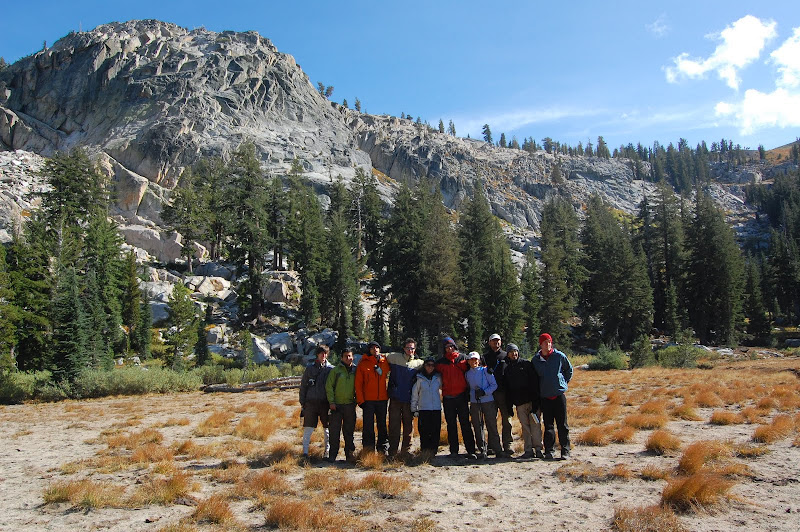 Our group below the ridge

We set up camp on the northeastern side of the lake and ate lunch. After lunch, Chris and I accompanied ten of our students on a hike up the ridge to the south of the lake. The day had turned very windy, and as soon as we gained the ridge we were exposed to the blunt of the gale. As we traversed a high alpine meadow, a front of cumulus clouds began moving in from the west. 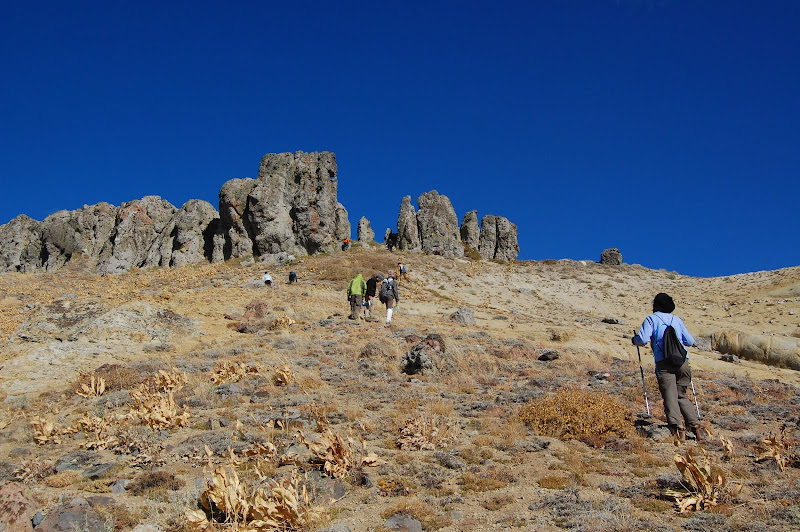 Above the meadow was another, smaller ridge topped by a series of tall, thin rocky outcrops. We ascended the second ridge as well. The top was even windier, but we got a spectacular view of the Spicer Meadow Reservior and the Stanislaus National Forest to the east. After a few minutes on top, we made our way back down to camp. 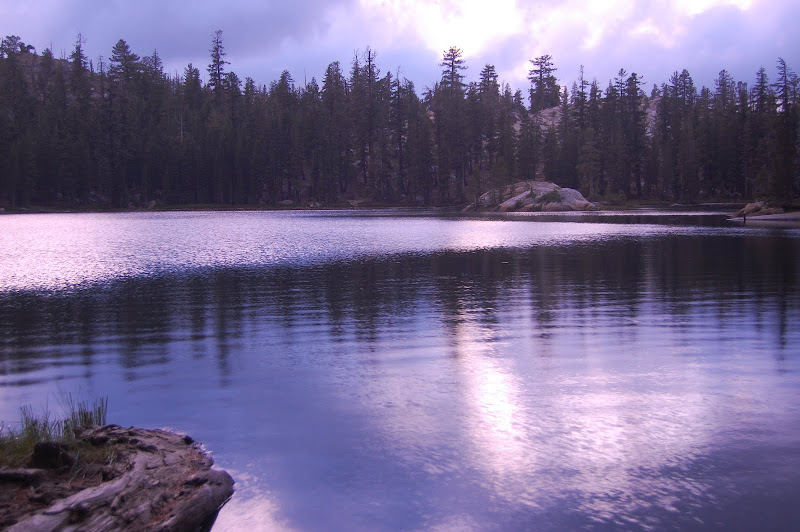 Bull Run Lake near our campsite

At camp, we debated having a campfire. The night was cold, but the wind was so strong that I decided it would be a bad idea. We cooked a dinner of lentil soup, pea soup, mashed potatoes, and salmon. Packing up our things, we prepared to go to bed. It was still early, but the night was cold and we were tired.

Chris and I planned to sleep outside again, but about half an hour after we got into our sleeping bags the first snow began to fall. We did a quick sweep of camp to make sure nothing critical had been left out and then crowded into a megamid. 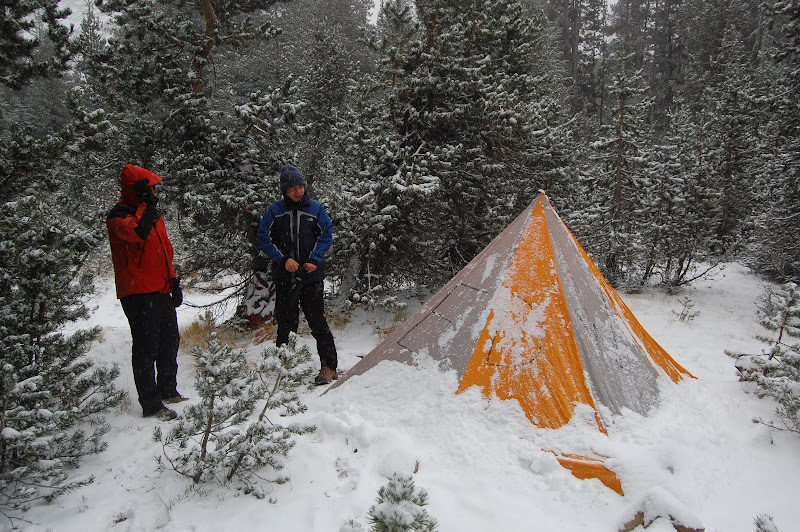 The snow kept up all night. We awoke to find that summer had turned abruptly into winter. Two or three inches of snow blanketed everything. It was breathtakingly beautiful—I’ve camped in the Sierras in every season, but I had never before been lucky enough to catch the first snowfall of the year.

We were, however, unprepared for a winter storm. The weather forecast had predicted a twenty percent chance of scattered snow showers, not a persistent storm all night long. Worried about road conditions and the cold weather, we decided to retrace our steps back to the trail head from the day before rather than continue the loop we had planned. We ate a quick breakfast of granola, packed up camp, and hit the trail. 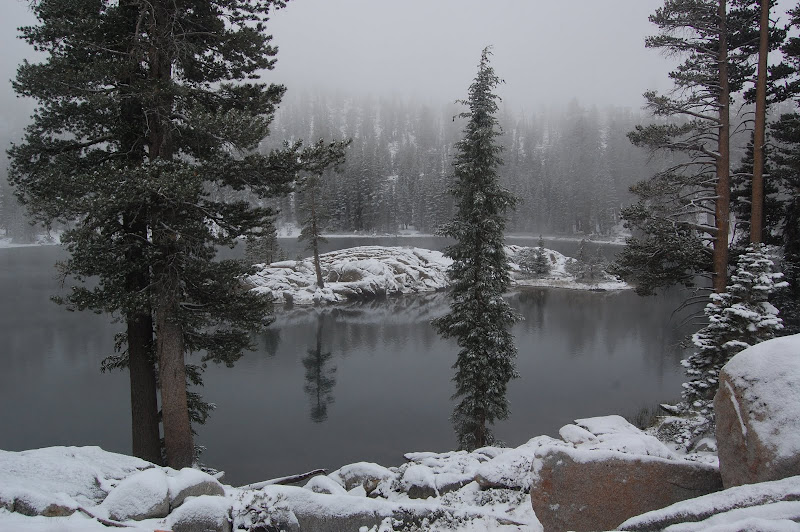 Our decision not to do the loop turned out to be a good one. The trail was completely covered in snow, and the wintry landscape looked completely different from the summer of the previous day. We hiked slowly but steadily, taking few long breaks. The snow continued to fall, sometimes heavily, until a little after 10 AM. 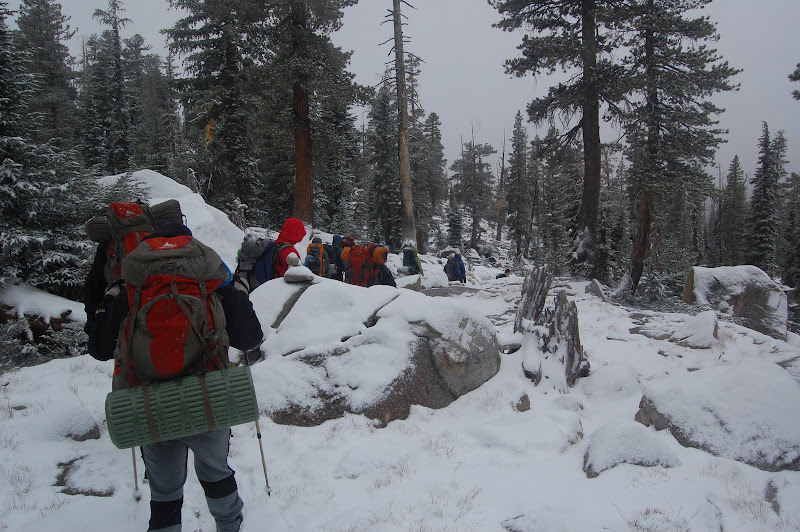 Hiking out on Sunday

Though the trail was blanketed in snow, it was still relatively easy to follow. The sun even poked through for about an hour during the break in the storm. As we approached Mosquito Lake, the clouds closed in again and the snow began to fall heavily once more. We stopped for a group shot above the lake. 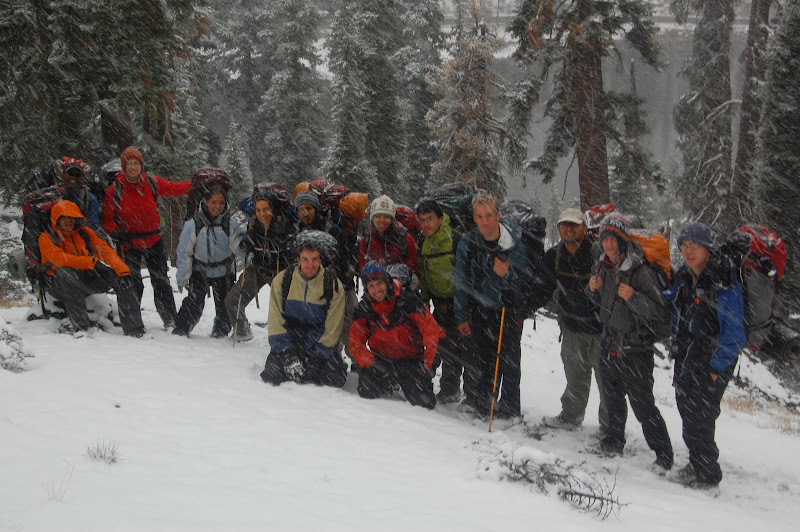 We reached our cars a little after noon. The road was blissfully free of snow, so we didn’t have to put on chains for the drive home. We stopped in Angel’s Camp for lunch, and we were back home by 5 PM. All in all, this was an incredible trip. Seeing the first snowfall of the year, especially in a place that people rarely see in winter, was a truly awe-inspiring experience.