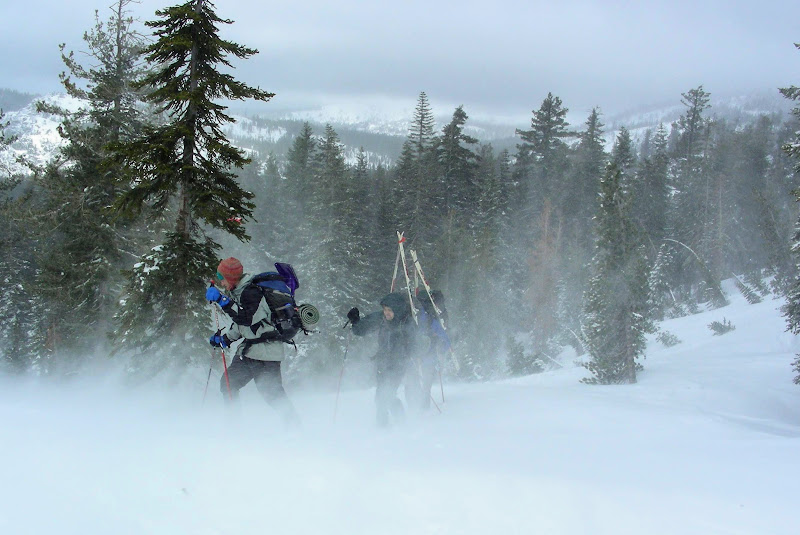 A longtime alpine skier, I was roughly introduced to the back country version of that sport one weekend during April of 2007. I was a student in Stanford’s Outdoor Education Program, and I was excited to venture into Tahoe National Forest with eight other students and two instructors. We met to organize our gear on Friday the thirteenth late in the afternoon. After testing stoves, pitching tents, and checking out gear, we threw our packs and skis into a large SUV and a monstrous pickup truck and hit the road.

Our destination was the area around Castle Peak, a 9,103 foot mountain across Highway 80 from Boreal Ridge ski resort. We reached the ski resort a little after eleven P.M. Friday night and set to work making camp. The temperature was cold, but not unreasonable. As we retired to our sleeping bags, snowflakes began to fall, somewhat mitigating our fears that Tahoe’s late season snowpack would make for terrible skiing conditions. 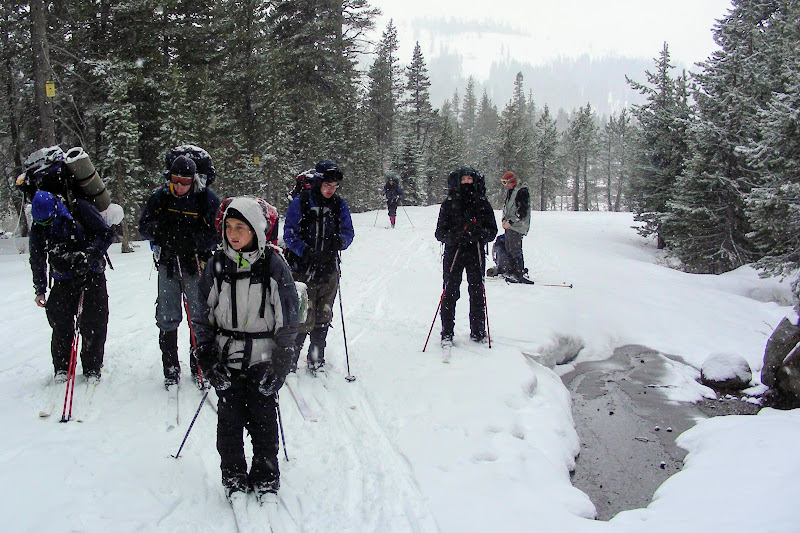 Our group sets out in a light storm

Those fears would turn out to be totally unfounded. The day before we arrived, the Tahoe area had received 6-8 inches of new snow, and it got another two or three during our first night. We woke up, made breakfast, broke camp, and started walking—carrying our skis—beneath Highway 80 to the trailhead. The trail was well-covered in snow, and our group made progress slowly as we clumsily adjusted to our new skis.

Back country skiing was challenging for all of us, even those used to downhill skiing. Unlike alpine skis, cross-country skis attach to the boot only at the toe, allowing the heel of the boot to lift off the ski. This type of binding allows for significant speed increases over flat and uphill terrain, but makes turning on downhill slopes much more difficult. 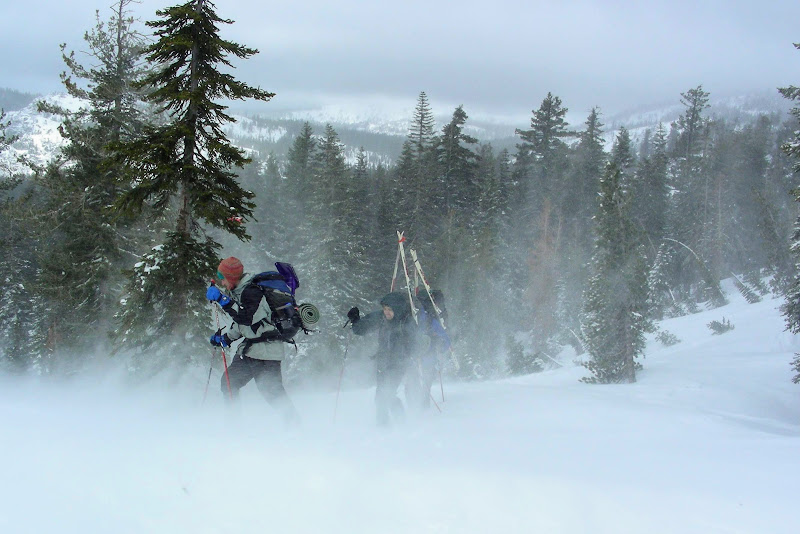 Ascending a ridge below Castle Peak

This wasn’t too much of a problem the first day, which was almost entirely uphill. Back country skiers use primarily two methods for making progress uphill. The method most of us used involved “scales” on the bottoms of our skis. “Scales” are small ridges shaped to allow a ski to move forwards but not backwards. Skis without scales, as one of our instructors had, require “skins,” detachable fabric affixed to the bottom of the ski that produces a similar effect. Still, as we neared the crest of Castle Pass (7,800 feet), the slope grew steeper and pushing up the slope more tiring and difficult. More than once we were forced to turn our skis across the hill and sidestep upwards.

All the while, the snowstorm that had begun the previous night continued, if anything increasing in intensity. When we had finally struggled to the top of the ridge, we reviewed our topo maps and decided on a campsite. Getting to the campsite we chose involved descending from Castle Pass, which was difficult for most of us. Downhill skiing on our nordic skis alone was a challenge, and balancing with our packs on was even more difficult. By the time we reached our campsite, however, some of us were beginning to achieve the early stages of competency, or at least controlled slides downhill without falling. 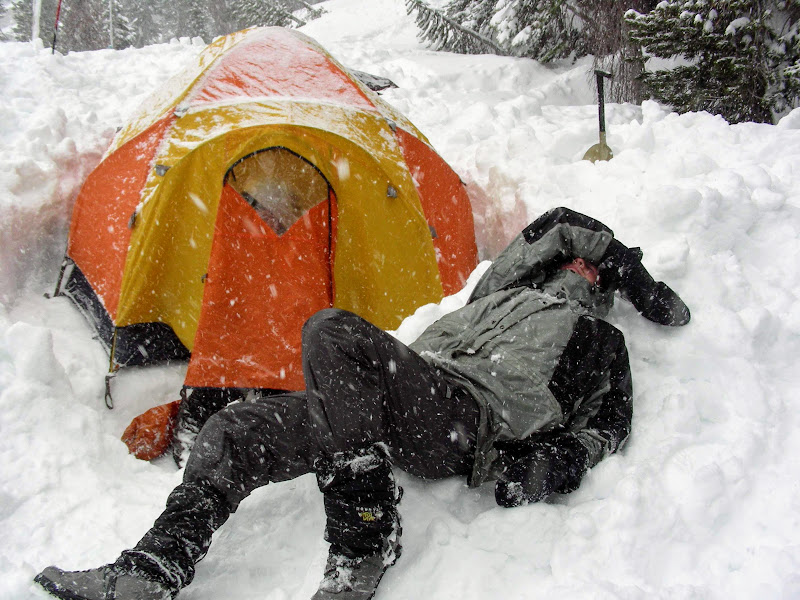 Resting at our campsite

We ate lunch and started making camp. It was still cold and snowy, so we relished the warmth-generating physical activity of digging platforms for our tents. Our trip leaders, Chris and Max, dug a kitchen in the snow, complete with benches and a table.

With camp mostly set up, seven of us skied away from camp without our packs to practice our technique on downhill slopes. The snowstorm still blizzarding around us had the positive effect of providing a new layer of excellent fresh powder. The skiing was hard work skiing down and then back up repeating, and we made progress slowly. However, a few of us eventually developed the ability to make turns and stay in control for an entire descent. After a few hours we returned to camp. 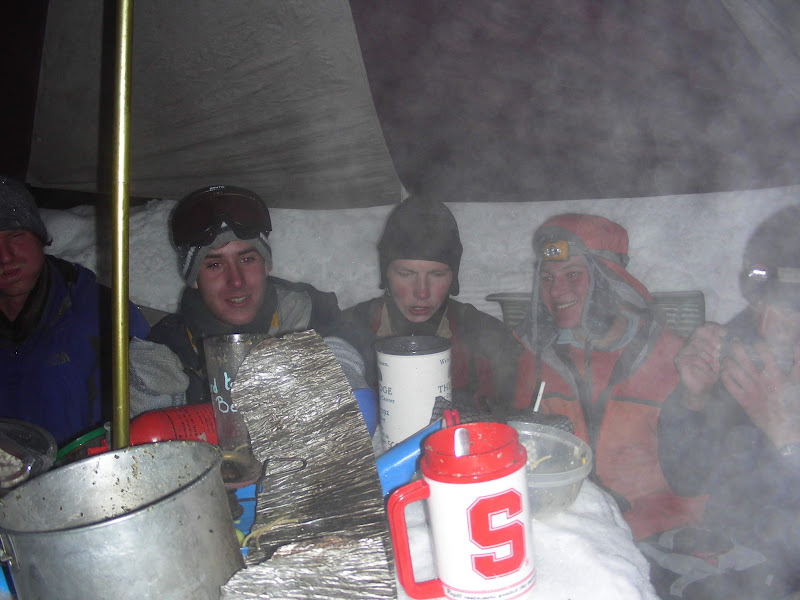 Eating dinner in our kitchen

We ate dinner as the sky darkened beyond the clouds, glad both for the warm pasta and the kitchen, now covered with a Black Diamond Megamid to keep the snow out. As we wolfed down our servings of pasta, we discussed such issues as the Donner Party (which had met its grisly fate near the area where we were), the merits of Tapatio (a type of hot sauce), and how cold we all were.

My previous snow camping experience (in Yosemite during the winter of 2006) had also been during a blizzard, but it had been significantly colder. Whereas the low temperatures on the Castle Peak trip were in the 20s, during my trip to Yosemite temperatures rarely (if ever) reached the 20s and were often in the single digits. The colder temperatures had one distinct advantage, however. In Yosemite, it was so cold that snow never melted, and water froze almost immediately. As a result, our equipment never got wet. Not true during this trip. Melting snow soaked the outside of our waterproof gear, but still managed to seep inside, mix with sweat, and make everything from long underwear to the insides of our gloves sopping wet. We retired to our tents at around 9 P.M. and curled up in our sleeping bags, trying to keep warm.

When we awoke the next morning, it was to find that the storm had mostly abated. It was still overcast, and strong winds intermittently buffeted our campsite, but no more snow was falling. After breakfast, we broke camp and held a meeting to plan our route back to the cars. We decided to ski back over Castle Pass, and spend some time practicing our skiing technique in the meadows on the other side. 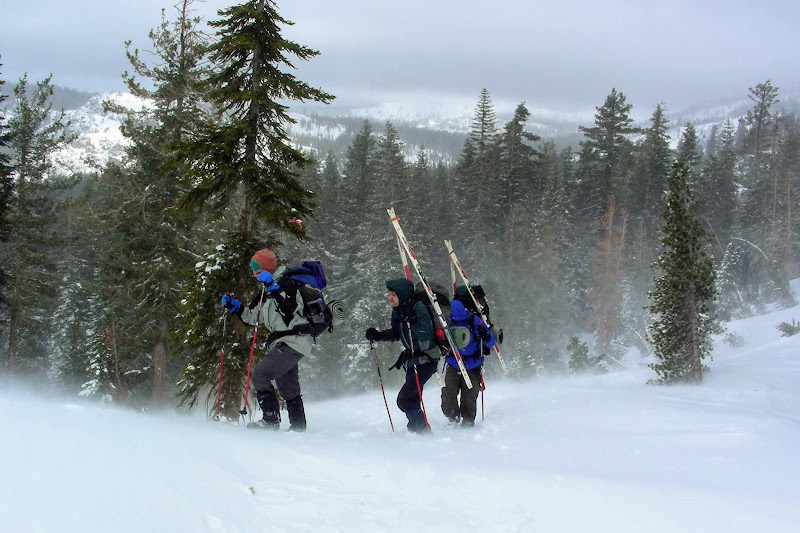 Gaining the top of the ridge was no easy task. We cut broad switchbacks up its steep sides, trying to avoid slopes that appeared avalanche-prone. As we turned to make our final approach to the ridge line, the wind, no longer blocked by the ridge, started blowing even harder. The howling was so loud that we had to yell to be heard, even while standing close together. We discussed our options for the descent, and tried to match our path with the least steep route on the topo maps.

The descent was also challenging, and we traced a long, slow path through the snow over the steepest parts of the ridge. Once we reached the bottom, however, the terrain flattened out and we began covering ground more quickly. After skiing for a short while, we reached a long clearing in the forest and decided to eat lunch at the far side. We satiated our hunger and again started exploring without our packs, spending about an hour and a half refining our technique on our skis. Then we returned to our packs and began skiing the final stretch back to the trailhead. 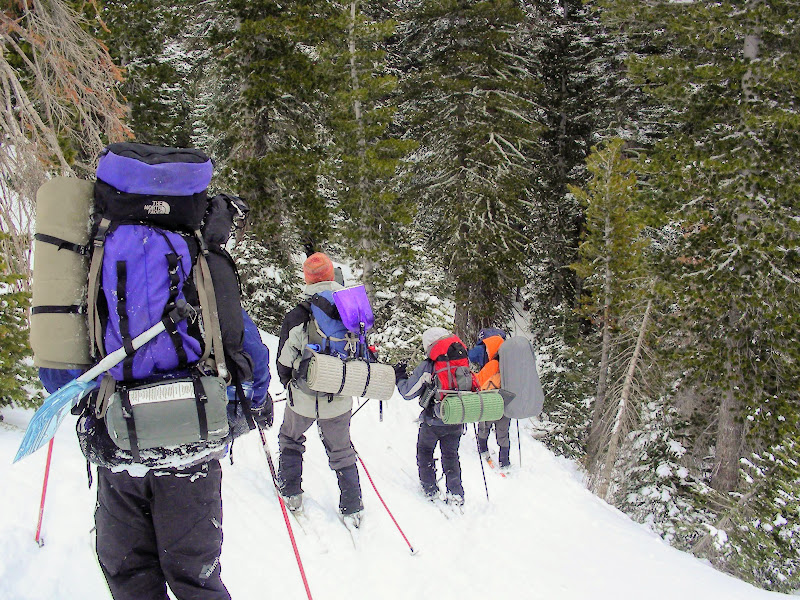 By this time, the sky had cleared. It was getting warmer, and the snow was quickly turning to slush. Fortunately, the short distance to the trailhead was mostly flat ground, with a slightly hairy river crossing over a steep snow bridge. We covered the remaining ground to our cars in a fairly short time, packed the cars, changed, and started the drive back home. We returned to campus around 8:45 P.M., ending a truly awesome weekend and throwing us all back into the harsh reality of the schoolwork we hadn’t done in the backcountry.

Previous Yucatan
Next Round Top