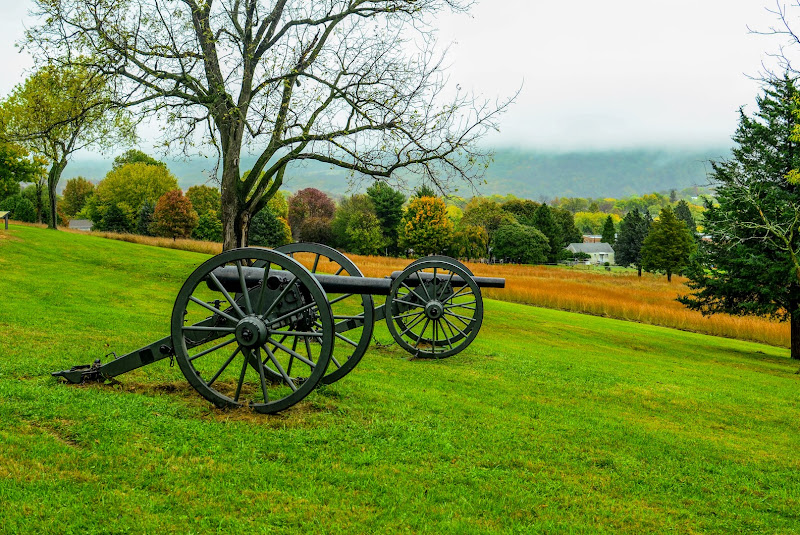 I spent a weekend in late October touring two battlefields of the American Civil War with my wife and in-laws. We left Washington on a sunny Saturday morning and drove to Gettysburg. Fought from July 1 to July 3 of 1863, Gettysburg is often considered the turning point of the war. Robert E. Lee brought his Army of Northern Virginia, composed of about 75,000 men, to meet George G. Meade’s Army of the Potomac, with about 104,000 men. Over the course of three days, the armies suffered combined casualties approaching 50,000, with almost 8,000 killed. The battle has been immortalized in popular culture through Michael Shaara’s excellent novel The Killer Angels, the movie Gettysburg, and Ken Burns’s documentary. And in November of 1863, President Abraham Lincoln delivered quite possibly the best-known speech in the history of American rhetoric to dedicate the battlefield cemetery. The site of the battle is a beautiful and hallowed place, and it’s impossible to get a true sense of the scope of these events without seeing it.

We drove to the visitor center, which contains and impressive museum that’s so large as to be overwhelming. The visitor center also contains the “Cyclorama,” a massive painting that depicts Pickett’s charge, the battle’s bloody denouement. Painted in 1883, the cyclorama is a 360-degree panorama. Visitors stand in the center, and lighting and sound effects recreate the fateful assault. Both the museum and the cyclorama are worth a visit if you have the time and the money (it’s $12.75 for the museum and $18.75 if you want to see the cyclorama and watch a film).

We’d arranged for a licensed battlefield guide to take us around the park. This involves hiring a private guide who will join you in your car—and drive it if you like—to take you around the battlefield and explain the history of the war and the people who fought in it. I’ve done two of these tours at Gettysburg now, and both were fantastic. The guides are extremely knowledgeable and personable, and they’ll customize the tour if you have particular interests you want to emphasize. We got a broad overview of the battle, beginning with Buford’s courageous cavalry defense, running through Lee’s poorly coordinated attacks on the second day, Chamberlain’s bayonet charge, and finally Pickett’s charge. Our guide did a great job of explaining the battle and using maps, diagrams, and photos to put each stop in context. 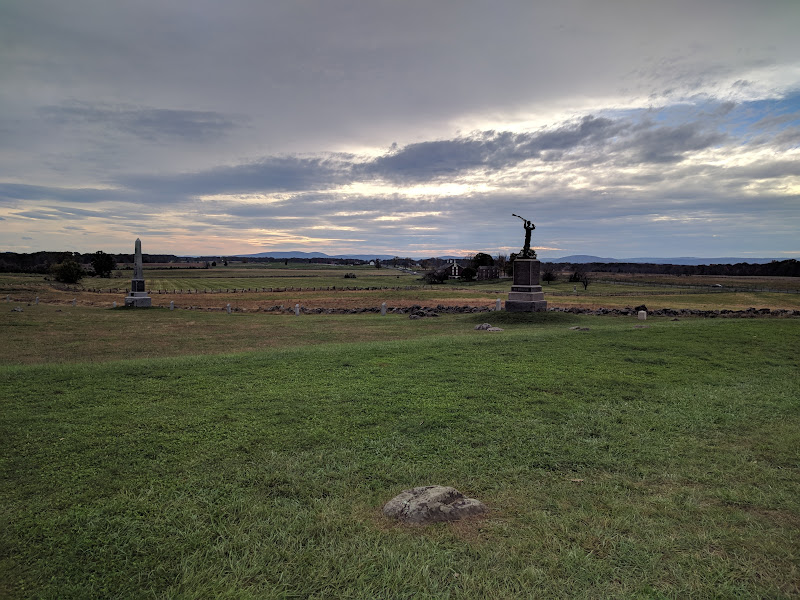 The battlefield from Cemetery Ridge

After the tour, we checked into our lodgings, the Baladerry Inn. Set about a ten-minute drive outside the main town of Gettysburg, the Baladerry Inn is peaceful and beautiful. The hosts, Kenny and Judy, are warm and welcoming. The inn itself is a historic building, dating to 1812, and it was used as a hospital during the battle. It’s outfitted with a gorgeous deck, two large common rooms, and a hot tub. We enjoyed our stay there immensely.

The battlefield from Little Round Top

Once we’d checked in, we drove to Battlefield Brew Works, a brewery and distillery. The tasting room is an old barn with a neat vibe. The beers are good but not outstanding, and they’re a perfect way to relax after a day touring the battlefield. The spirits are good as well; my favorite was the rye. That said, I don’t really like gin, and everyone who tried the gin liked it. They also had a really interesting seasonal special, a hot chocolate chili liqueur, that was so unusual we had to buy a bottle.

When we’d drank our fill, we drove into downtown Gettysburg and to the Dobbin House for dinner. Built in 1776, the Dobbin House is the oldest home in Gettysburg. It was a station on the Underground Railroad, and it served as a hospital following the battle. Now it’s a bed and breakfast and restaurant, and the food is delicious. We enjoyed a wonderful dinner while sitting a room that looks it belongs in the eighteenth century. We returned to the Baladerry Inn for bed.

The next morning we drove about an hour to Harpers Ferry. A town of 291, Harpers Ferry lies at the conjunction of the Potomac and Shenandoah Rivers, and the point where Maryland, Virginia, and West Virginia meet. It’s nestled among the rolling Blue Ridge Mountains and is spectacularly beautiful. Thomas Jefferson said that the view of the the Potomac vanishing through the mountains was worth the trip across the Atlantic.

Unlike Gettysburg, Harpers Ferry requires an entry fee ($20 per vehicle). We hired a licensed guide for Harpers Ferry as well, and we met him at the visitor center to embark on a fascinating tour. In 1733, Peter Stephens settled in what’s now Harpers Ferry and established a ferry across the Potomac from Virginia to Maryland. Robert Harper “bought” the land (Stephens was a squatter, so it wasn’t his to sell) in 1747. The federal government bought land in the town in 1796 as the site of an armory and arsenal. John Hall developed the use of interchangeable parts to make rifles at the Harpers Ferry armory in the early nineteenth century.

In 1859, abolitionist John Brown developed plans to ignite a massive slave rebellion across the American South. His first stop was Harpers Ferry, where he led 21 like-minded men to seize the arsenal. When local militia arrived, Brown and his men took cover in the engine house near the armory. Marines arrived after about a 36-hour standoff, and Brown surrendered. Brown was tried for treason against Virginia and hanged.

Harpers Ferry also had fascinating role in the Civil War. It changed hands between the Union and Confederacy at least eight times during the course of the war, but the most important fighting there was the Battle of Harpers Ferry in September 1862. Union Colonel Dixon Miles and his 14,000 men were charged with the defense of Harpers Ferry. Lee was leading the Army of Northern Virginia on his first attempt to invade the North. Miles concentrated his men around the town, permitting Lee’s commanders to seize the three ridges around Harpers Ferry, surrounding him. Miles surrendered, and over 12,000 Union soldiers were taken prisoner. It was the largest American surrender until World War II. The Battle of Harpers Ferry isn’t particularly famous, in large part because it set the stage for the Battle of Antietam two days later, which is known as the bloodiest day in American history and, though a tactical draw, derailed Lee’s invasion of Maryland. 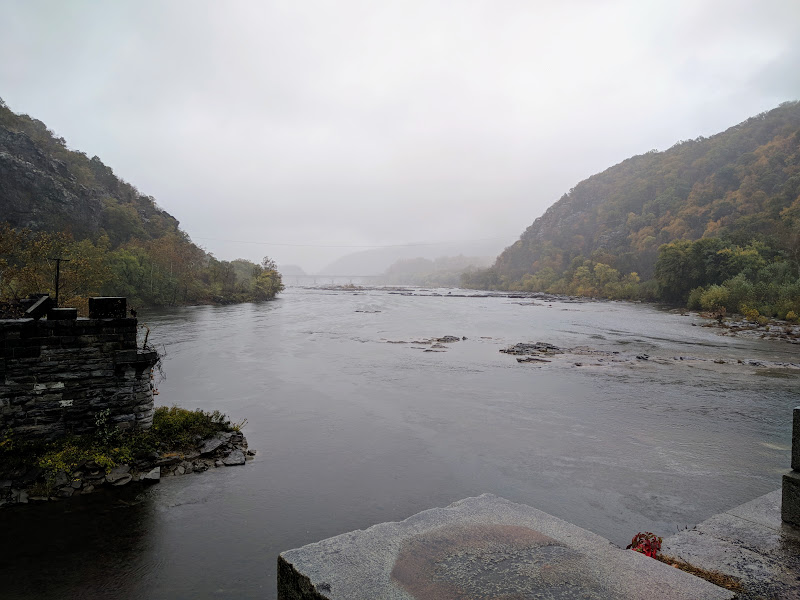 Harpers Ferry on a rainy day

There’s a lot of other interesting history at Harpers Ferry. Meriwether Lewis stopped at the arsenal to outfit his famous expedition. Storer College, founded as a school for freedmen in 1865, was one of the country’s early historically Black colleges. Much of the “downtown” part of Harpers Ferry is well-preserved historic buildings, full of neat shops, taverns, and museums. We really enjoyed our tour, though it was raining much of the time, which made walking around much less enjoyable and the views much less impressive. Overall, though, Harpers Ferry is one of my favorite spots in the area, especially on clear days in the fall when the trees are changing their colors along the beautiful rolling ridges above the rivers.