A red-eye from Los Angeles brought us to San Jose, Costa Rica early on a Friday morning. A driver picked us up at the airport and began driving us west toward the Pacific Coast. We stopped at a restaurant for a gallo pinto, a traditional Costa Rican breakfast of eggs, rice, black beans, and tortillas. Then we pushed on to Crocodile Bridge, a bridge spanning the River Tarcoles at a popular hangout for crocodiles. We also stopped at an overlook above Playa Hermosa, where saw several scarlet macaws alighting in the trees. 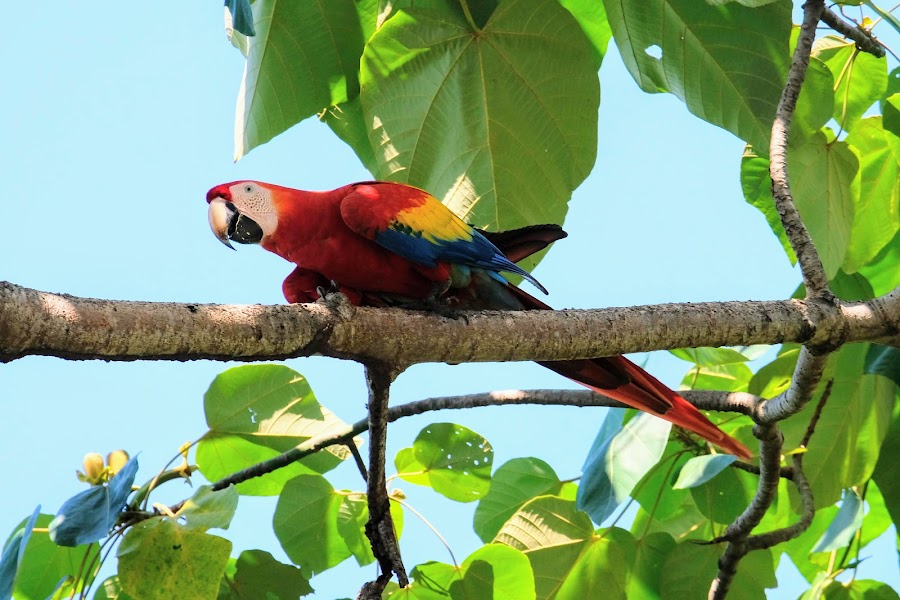 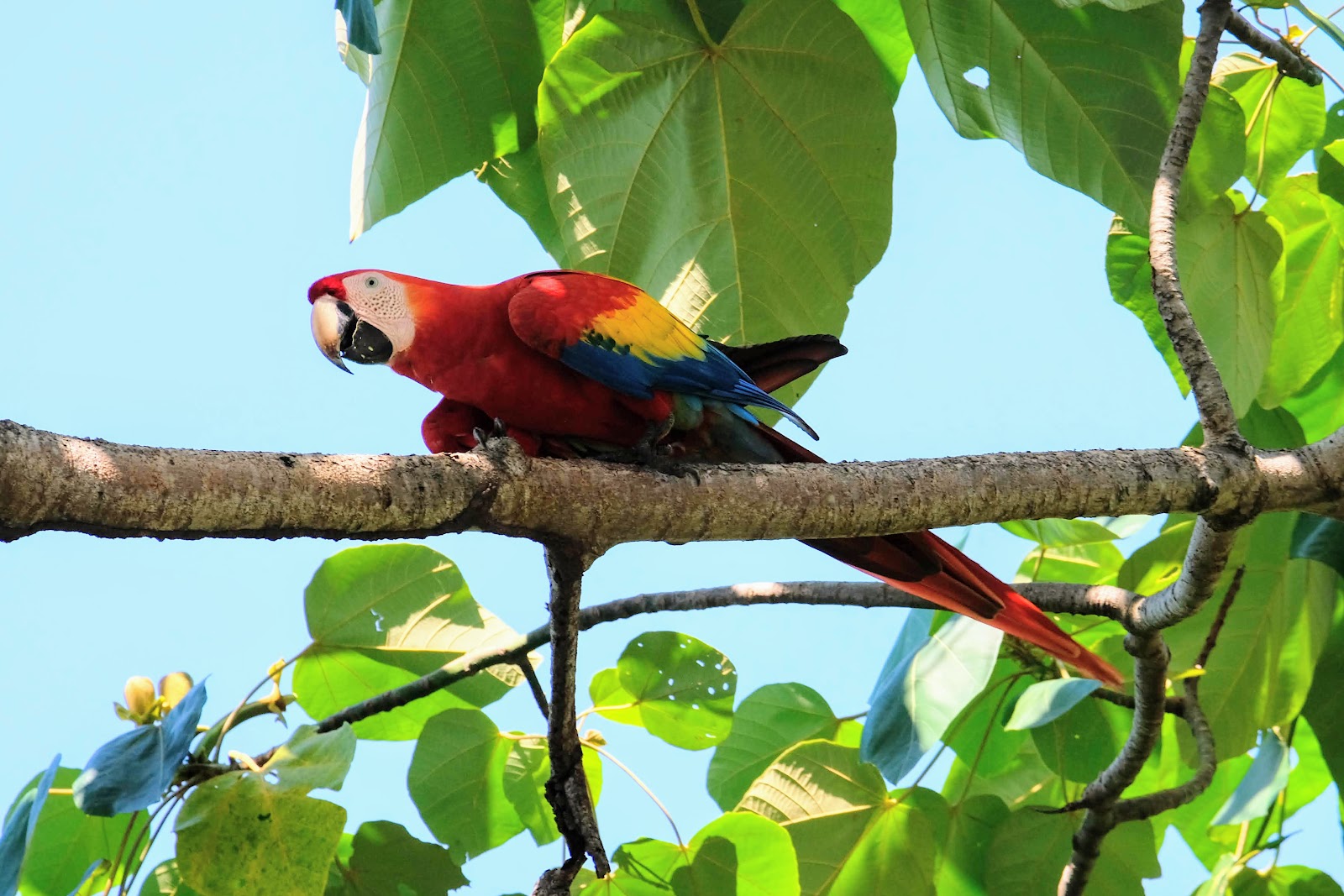 We reached our hotel, the lovely Arenas del Mar Beach resort. All beaches in Costa Rica are public land, but the resort opens onto the beautiful Playitas Beach, which is bracketed on both sides by rocky points that keep the beach quiet. We spent the afternoon relaxing on the beach and swimming in the ocean and the pool.

In the morning we drove a short way to Manuel Antonio National Park. Manuel Antiono boasts acres of jungle, but its main attraction is a spit of land that narrows to an isthmus with beautiful beaches on both sides, and then expands again into a broader, forested point surrounded by the ocean. We walked through the jungle, our guide pointing out wildlife, including two-toed and three-toed sloths, iguanas, basilisks, hammerhead lizards, gladiator tree frogs, and long-nosed bats. 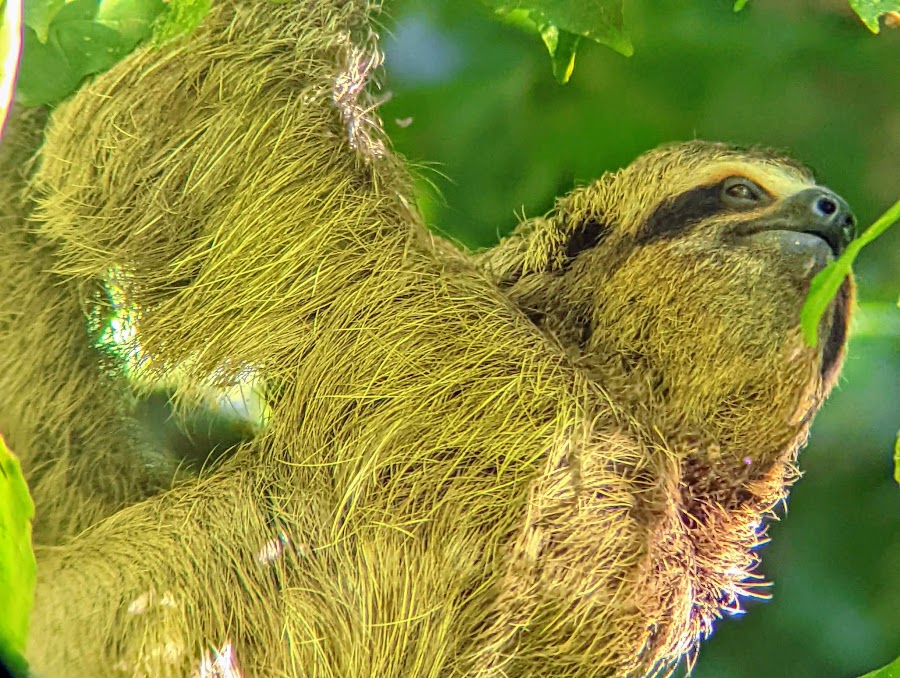 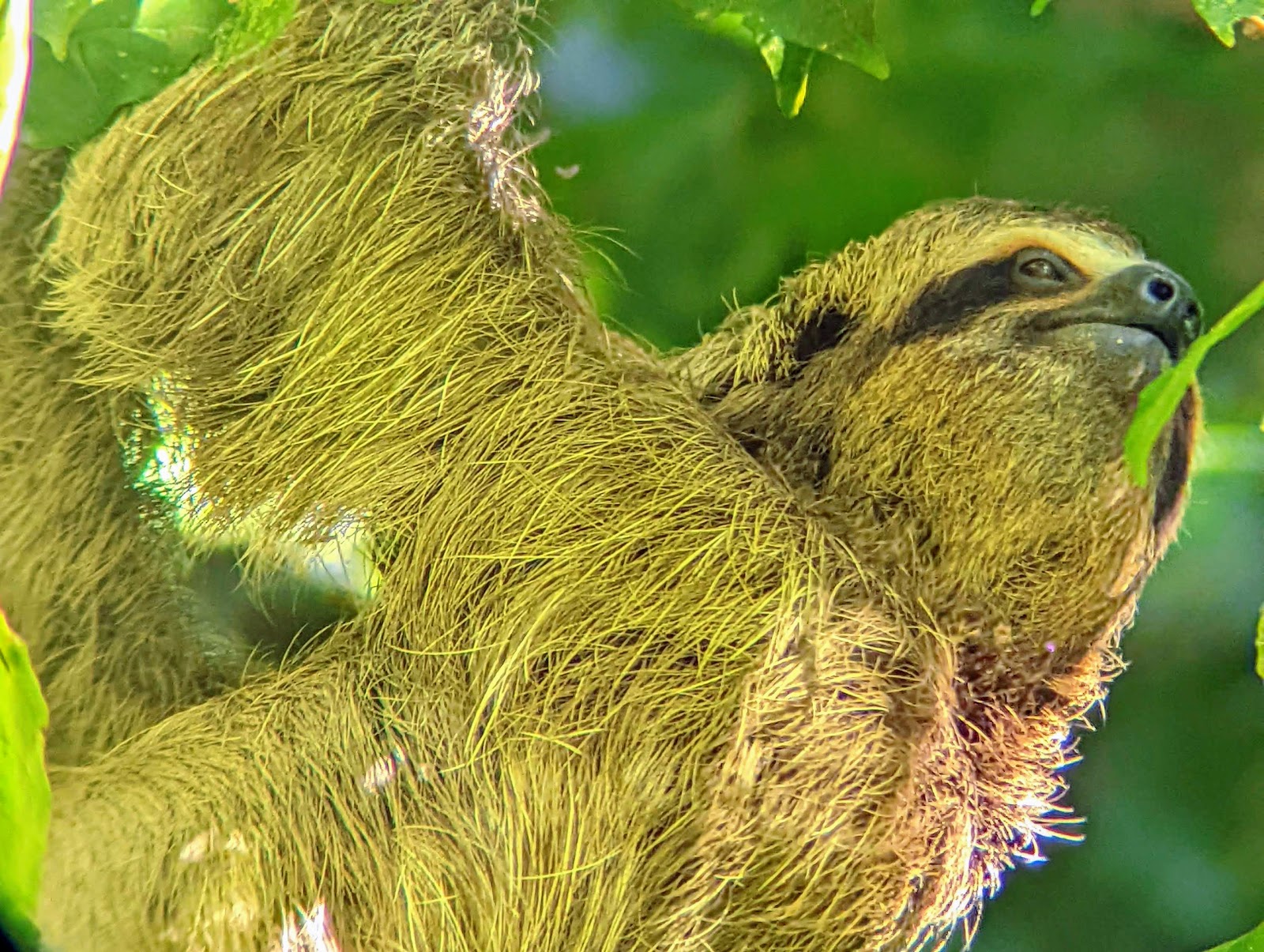 We spent about an hour at the park’s beautiful beaches, and then we strolled back along the beach. Returning to the hotel, we spent another enjoyable afternoon at the beach.

The next day we drove out to Damas Island, which is surrounded by mangrove forests. A dense maze of tangled trees, the forests grow into the waters of the estuary. We kayaked through the forests for a few hours, admiring the close thickets, and taking in the toucans, crabs, and other wildlife that populate the forest.

In the evening, we strolled along Espadilla Beach, the large public beach between our hotel and the national park. We took in a gorgeous sunset before we reached the small downtown area near the park. We ate an excellent seafood dinner at Restaurante Marlin. Then we had an after dinner drink at El Avion, a restaurant and bar whose focal point is a Fairchild C-123 cargo plane originally purchased to smuggle weapons to the Contras in Nicaragua as part of the Iran-Contra affair.

We relaxed on the beach the next morning, before Jake and I took a surf lesson on Espadilla Beach. In the evening, we drove out to Rainmaker, a private nature prserve, for a night rainforest. Exploring the jungle in the darkness was magical. We saw bullfrogs, red-eyed tree frogs, lizards, rain frogs, and two species of pit viper: the eyelash pit viper and the fer-de-lance, one of the most dangerous snakes in the world. 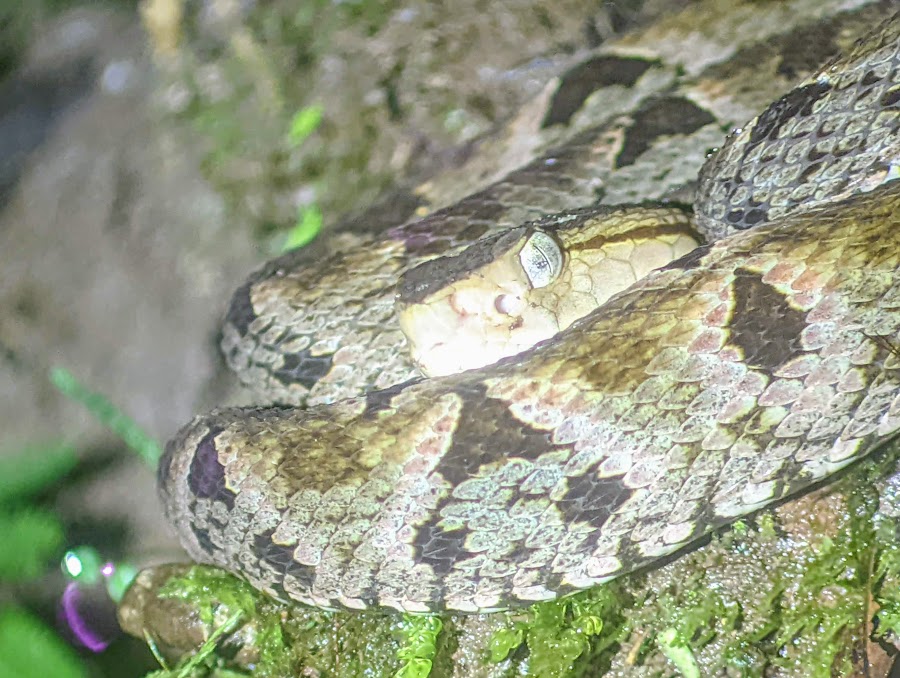 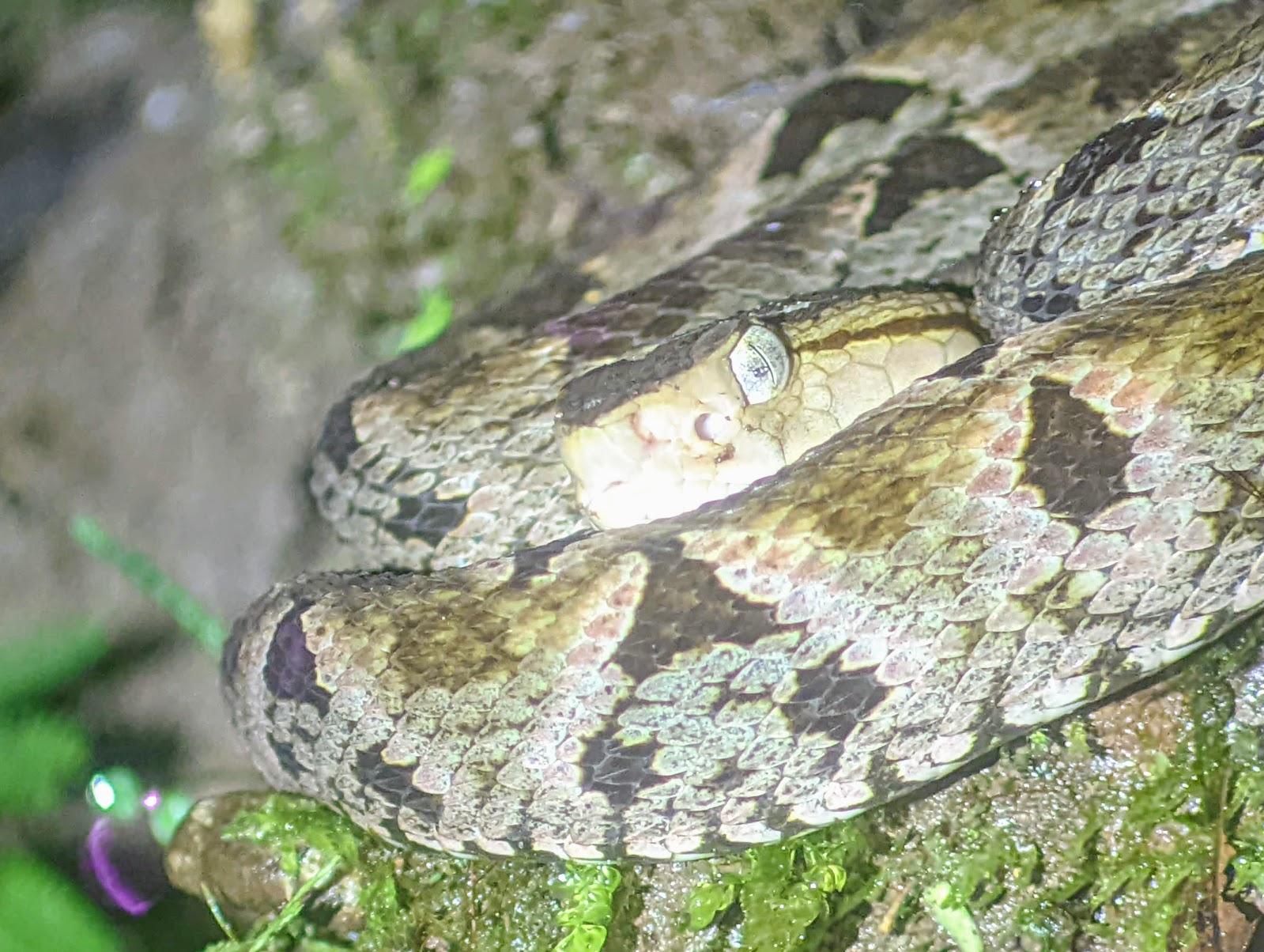 The following day was a travel day. We drove to the small airfield in Quepos for a flight to San Jose. Our flight was delayed by a heavy rainstorm, but we eventually reached our hotel, the charming Grano de Oro. Early the next morning we east toward the Pacuare River. We stopped breifly for breakfast at the charming Café Viñas, a restaurant and coffee farm.

Upon reaching the river, we boarded whitewater rafts for the ride into the truly incredible Pacuare Lodge. Nestled deep in the jungle, the lodge is beautiful and relaxing and isolated. After settling in, we took a guided walk through the rainforest, seeing reticulated glass frogs, strawberry poison-dart frogs, and a small but tranquil waterfall. 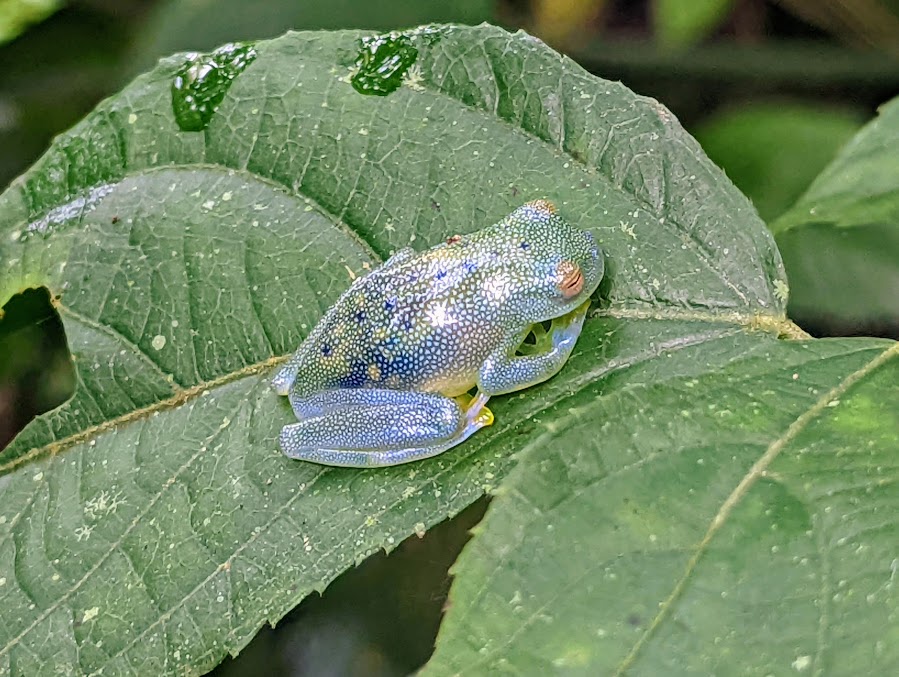 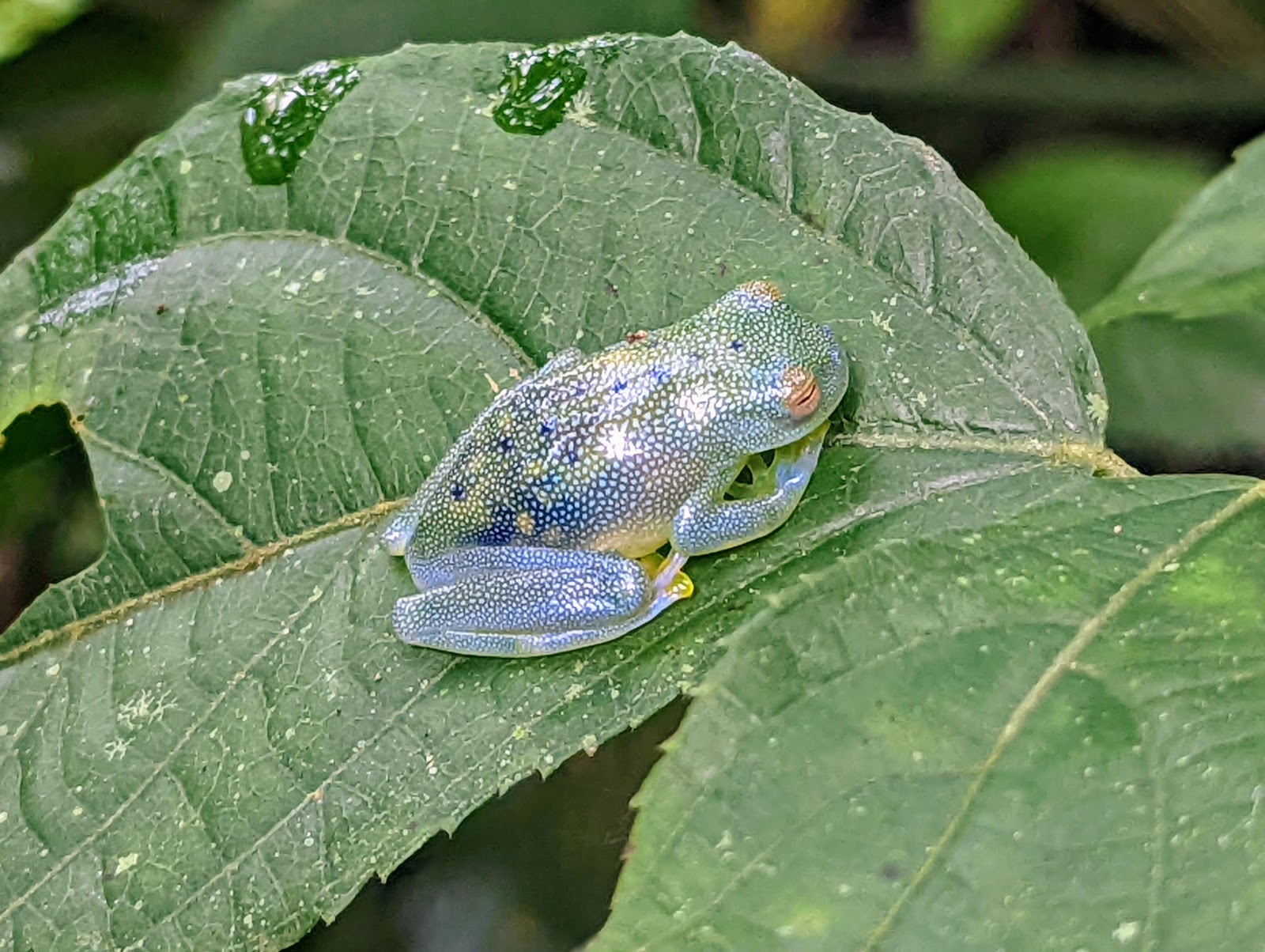 The next day we explored the area around the lodge enjoyed the many activities it offers. We tried canyoneering, a sort of obstacle course involving suspended bridges, rappels, and steep descents through a ravine. In the afternoon, we ziplined through the canopy.

We woke the next morning sad to leave Pacuare. But the lodge offered a final amazing adventure: rafting the Pacuare river back to civlization. It was an awesome excursion through class III and IV rapids in the middle of a gorgeous jungle. When we reached the takeout, our driver met us and, exhausted, we collapsed into a van for a ride northwest to the town of La Fortuna.

La Fortuna is at the base of Arenal Volcano, one of Costa Rica’s most dramatic peaks. When I’d visited the region twenty years earlier, I hadn’t realized how luck I was to see the mountain from its base to its summit. But Arenal is often shrouded in clouds, and good views are rare. In fact, we never saw the summit during our three-day stay.

We arrived at the stunning Nayara Gardens in time for dinner and a dip in one of the resort’s hot springs. We were also lucky enough to spot some red-eyed tree frogs in the branches around the hot spring. 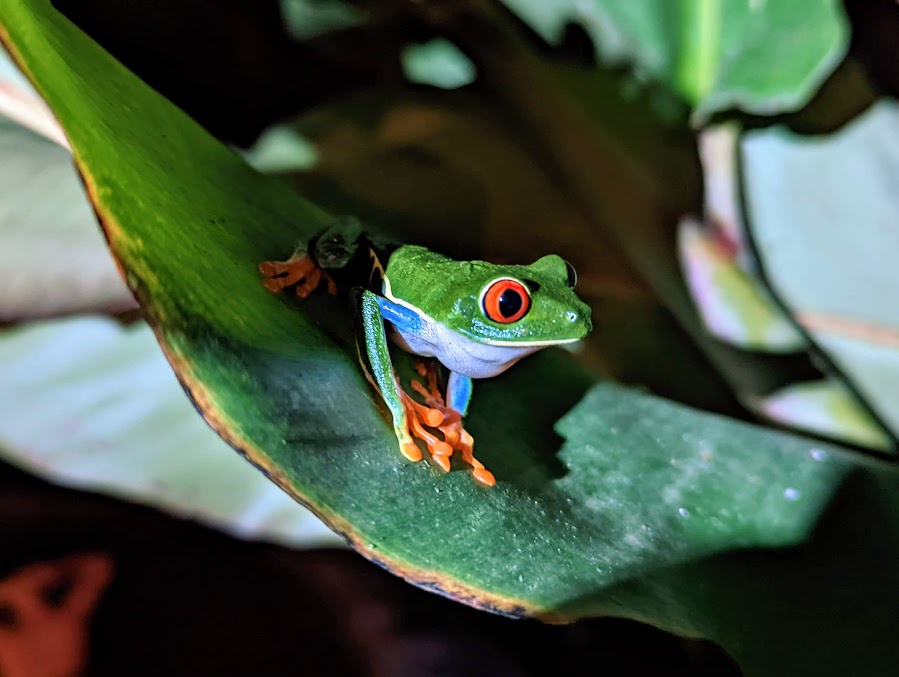 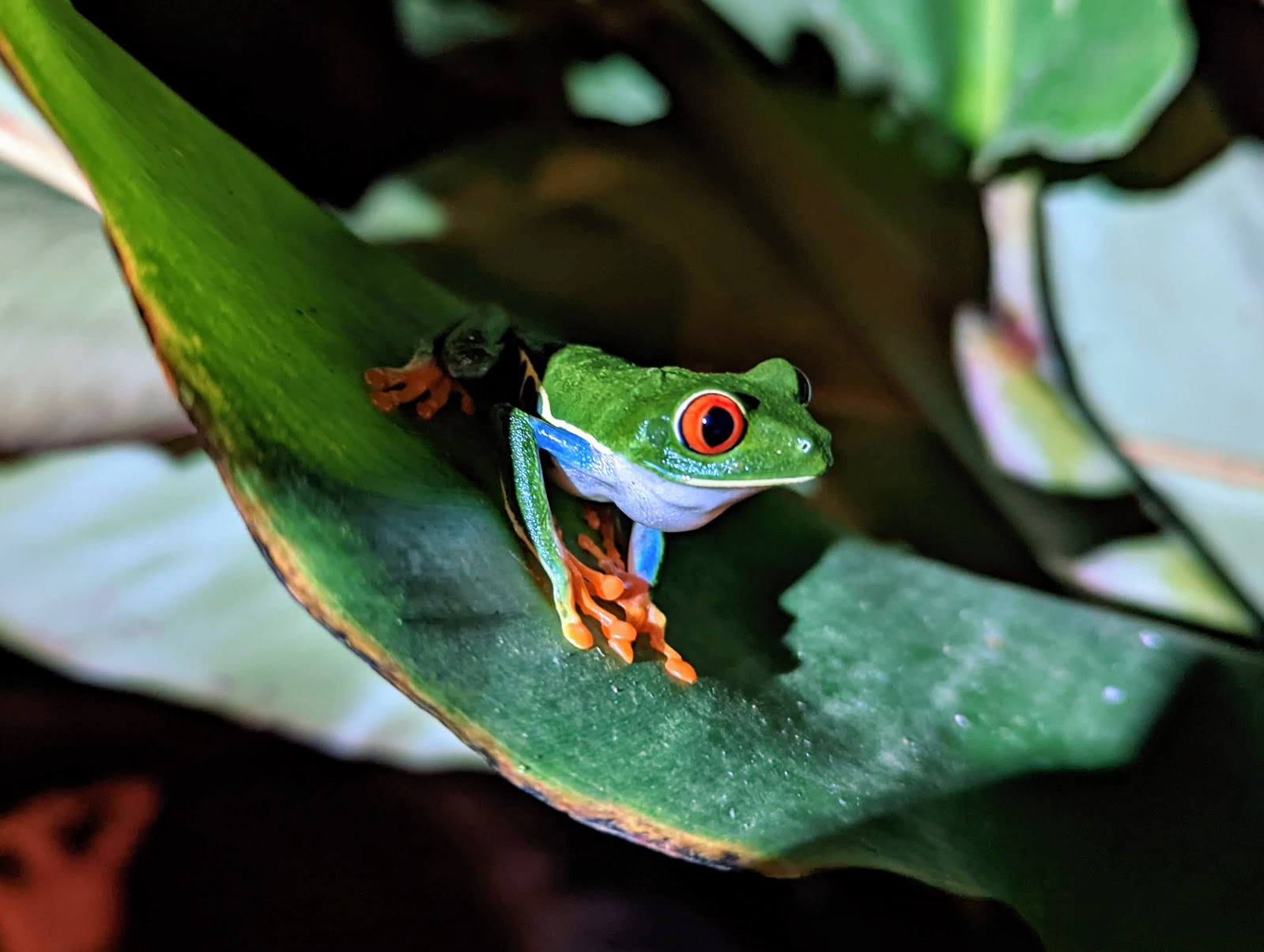 In the morning, we drove to the Místico Arenal Hanging Bridges. A series of trails and bridges through a misty cloud forest, Místico is gorgeous. We took in the beautiful views, and spotted more wildlife, including agoutis, golden eyelash pit vipers, and crested guans.

That afternoon, we visited Catarata Río Fortuna, a massive waterfall that tumbles 230 feet through the jungle. We swam in the pools beneath the waterfall, then returned to Nayara Gardens for dinner and a nightcap.

Early the next day, we drove out to Sky Adventures Arenal, a zipline tour at the base of Arenal. Hundreds of feet above the ground, with some lines almost half a mile long and reaching top speeds of around 45 miles per hour, it was a thrilling experience that offered great views (but not really an opportunity to commune with nature). We returned to Nayara Gardens, where we spent the afternoon enjoying the resort’s springs, pools, bars, and restaurants. Then we drove into the town of La Fortuna to visit some of the shops and eat dinner.

In the morning, we took the short flight back to San Jose and spent another night at the Grano de Oro. The following day we flew back home.