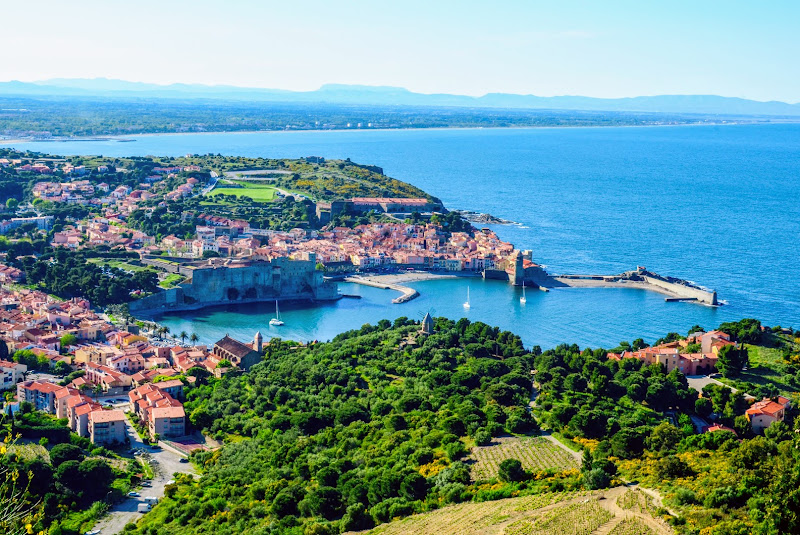 It was raining heavily when my flight landed Toulouse-Blagnac Airport in Toulouse, France early on a Saturday evening. Ducking through the raindrops, I made my way to the car my wife and in-laws had rented. We drove southeast about an hour to the town of Carcassonne. Carcassonne’s predominant feature is the massive citadel, La Cité, that rings its hilltop. People have lived in the area around Carcassonne since around 3500 B.C.E., and the Romans built an outpost there around 100 B.C.E.

The town supposedly gets its name from an apocryphal story about a siege during the eighth century C.E. Carcassonne was at the center of fighting between the Frankish king Charlemagne and the Arab Muslim Saracens. The Franks had surrounded the city for five years, and food was running out. Lady Carcas ruled in Carcassonne, and she used the town’s remaining food—a pig and some wheat—to deceive the Franks. The villagers force-fed the wheat to the pig, and the pig was thrown from the walls. When the Franks saw how well the people Carcassonne were able to feed their livestock, they decided that the city could withstand the siege indefinitely. As the Franks retreated, Lady Carcas ordered all of the city’s bells to be rung in celebration. One of Charlemagne’s men remarked, “Carcas sonne!”, which translates to “Carcas sounds!” 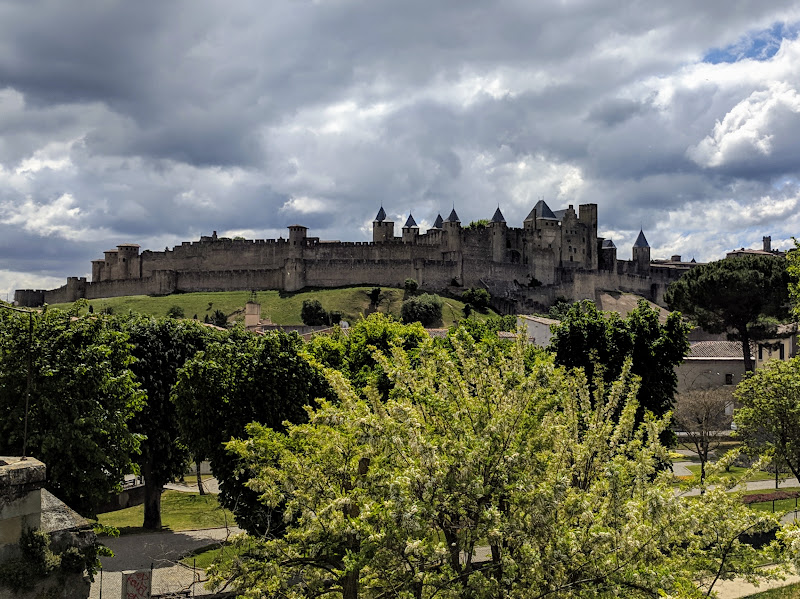 It was already pretty late when we checked into our hotel, so we walked into the old town for dinner at Auberge Dame Carcas, a restaurant specializing in traditional Languedoc cuisine (think lots of cassoulet and duck fat). The next morning, we set out to explore Carcassonne. We walked the streets of the old town, and wandered out into the new town for some panoramic views of La Cité. Then we returned to the old town for lunch at Le Trouvère.

In the afternoon, we took a walking tour of La Cité, saw the cathedral, and toured the fortress and ramparts, one of the better historical tours of the trip. We stopped by the upscale and beautiful Hotel de la Cité Carcassonne for happy hour drinks and then returned to the charming Place Marcou for a casual dinner. Carcassonne from the ramparts

We left Carcassonne in the morning and drove southeast towards the seaside town of Collioure. On the way we stopped at Abbaye Fontfroide, a quaint abbey perched in the rolling hills near the border with Spain. Founded in 1093, Fontfroide joined the Cistercian order in the twelfth century. Between 1791 and the early twentieth century, the abbey fell into disrepair despite an 1858 effort to re-found it. In 1908, the artists Gustave and Madeleine Fayet d’Andoque purchased Fontfroide and began a long and expensive effort to restore it. Today it’s a little-known jewel in an obscure part of France that’s well worth a visit. The history is fascinating (take the well-executed audio tour), the grounds and gardens are stunningly beautiful, and the chapel is impressive. The abbey is also a winery and offers tastings. 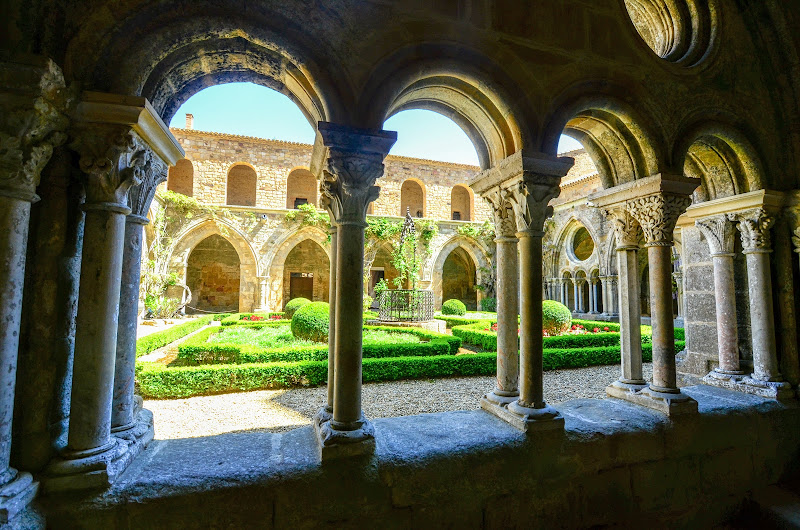 The cloisters of Abbaye Fontfroide

We reached Collioure in the early afternoon. Nestled along the shimmering blue-green waters of the Gulf of Lion, Collioure is simply gorgeous. The massive Château Royal de Collioure, a castle originally built by the Templars around 1207, dominates the shoreline. A bustling plaza stretches along the Mediterranean coastline, filled with bars, restaurants, and shops. Perched in the hills above the town are Fort Saint-Elme and Fort Dugommier. We hiked about half an hour up to Dugommier, well worth it for the incredible views of the town and the sea. Returning to Collioure, we visited Cellier des Dominicains for wine tasting and then ate a fantastic dinner on the seaside terrace of La Voile. We watched the sunset and night fall as Collioure lit up around us. The next day we set out southwards and crossed the border into Spain. Our first stop was Figueres, the birthplace of surrealist artist Salvador Dali. The Dalí Theatre-Museum is an old theater that now serves as an enormous display of Dali’s work. Designed by Dali himself, the museum is probably what you’d expect from a surrealist; it bursts with the strange and unexpected. Some of the art is interactive, and one, “Explosion of Mystical Faith in the Midst of a Cathedral” can only be seen through a mirror in one of the other exhibits.

We pushed on to Port Lligat, where Dali spent most of his life. His home is now a museum open to the public, and we toured the delightfully odd and unusual house. Then we drove a short distance to Cadaqués. We walked along the seaside, but it was unseasonably cold and a harsh offshore wind soon forced us inside for a snack and drinks at Maritim Bar. Our lodgings for the night were at Celler Martín Faixó, a winery in the hills above the city. The winery was tranquil and beautiful, and the wine was delicious, too. We had a fantastic dinner at Casa Anita in town. There was no menu; the proprietor sat at our table and told us what he recommended from the day’s selection—some delicious asparagus and fresh fish. 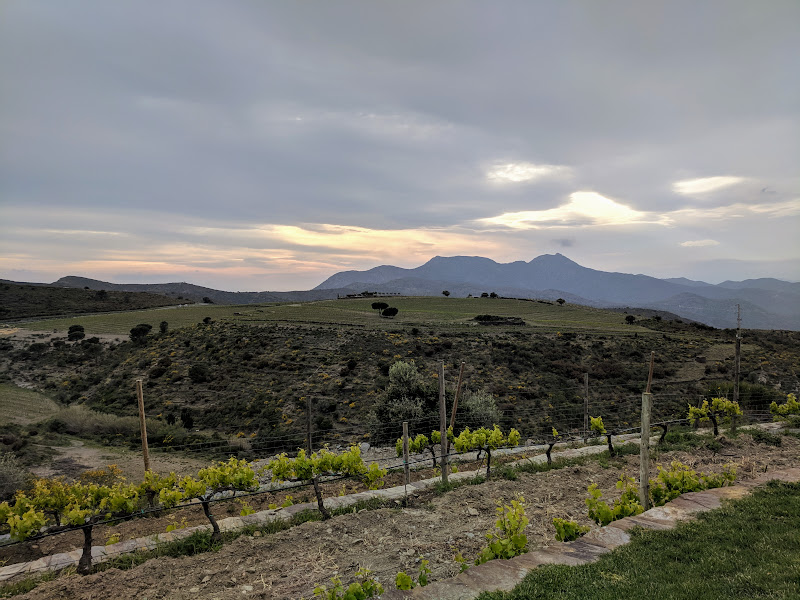 In the morning, we toured the winery and enjoyed a tasting before driving to Montserrat, a gigantic massif about an hour northwest of Barcelona. Montserrat is the site of the Benedictine abbey, Santa Maria de Montserrat, which is perched improbably on a small plateau among the mountain’s sheer peaks. We rode the Funicular Saint Joan up above the town, and hiked even further to get a breathtaking view of the abbey and surrounding area. Stopping briefly for ice cream, we descended and drove on to Barcelona. 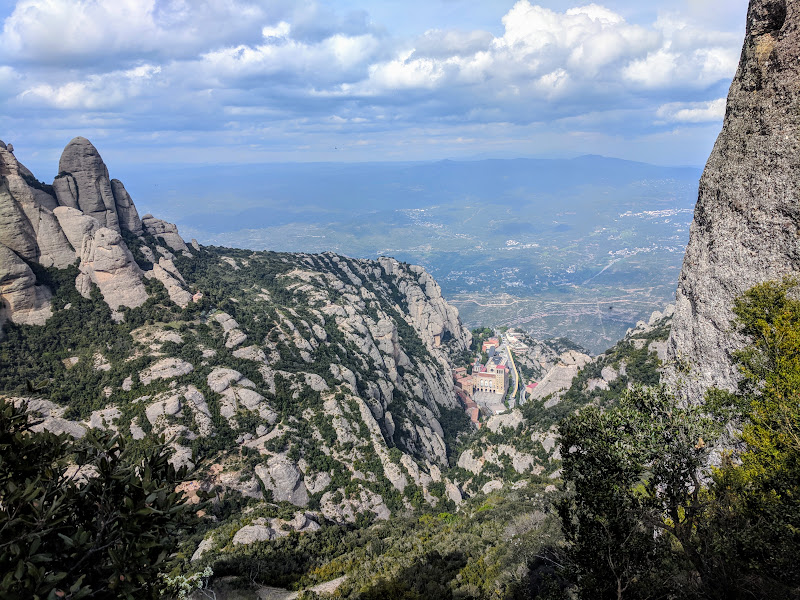 Overflowing with energy and vigor, Barcelona can be a little overwhelming. We dropped our bags at the charming apartments of the Central Suites Barcelona and set out to explore the city. Barcelona’s broad streets are divided by broad medians, many of which are packed with outdoor seating for restaurants. They typically offer tapas, wine, and beer throughout the day. We ate dinner at Tapas 2254 and returned to our apartment for the night.

We met a guide in the morning for a walking tour of Barcelona that took us to some of the city’s important historical sites and culminated in the awesome La Sagrada Familia. Construction of the massive church began in 1882. The architect Antoni Gaudí took over the project the next year and completely redesigned it. Gaudí devoted the rest of his life to La Sagrada, but when he died in an accident in 1926, the church was less than a quarter complete. It remains under construction to this day, though it’s hoped that La Sagrada will finally be completed in 2026, in time to commemorate the one hundredth anniversary of Gaudí’s death. 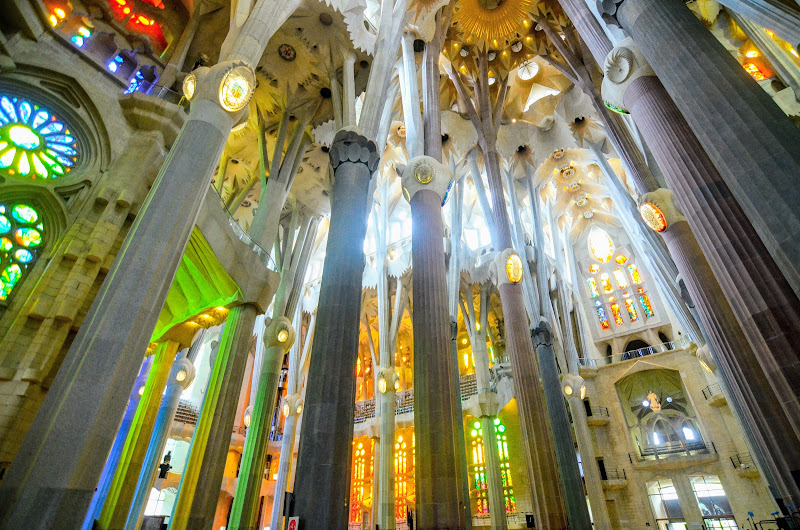 Despite the cranes and scaffolding, La Sagrada is astounding; it’s one of the most impressive man-made structures I’ve ever seen. Intricate facades and towering spires dominate the exterior. Inside, tree-like columns and staircases and rainbow stained glass emphasize Gaudí’s love of nature.

After a tapas lunch near our apartment, we visited Barcelona’s cathedral. The cathedral’s ornate interior, interesting history, and terraces all make it worth a visit. Then we strolled down La Rambla, Barcelona’s famous tree-lined pedestrian street, to the sea.

The next day we toured the Museu Picasso, Barcelona’s museum dedicated to Pablo Picasso. The museum has a vast collection of Picasso works, but it focuses on the periods when the artist lived in Barcelona—very early in his career and again for a short stint much later. Fans of cubism will be disappointed; most of the art represents Picasso’s forays into other styles.

Casa Mila (popularly known as La Pedrera) is an apartment building designed by Gaudí and constructed between 1906 and 1912. The facade and terrace are the highlights, but the audio tour was well worth it; it does a good job of explaining the building’s architecture and history, as well as providing information about how Casa Mila’s occupants actually lived.

In the evening, we took a taxi out to Park Güell, another Gaudí site. Originally envisioned as a real estate development, Gaudí only built a few structures before the project fizzled and it was converted into a public park and garden. Like most of Gaudí’s work, the buildings in the park whimsical and naturalistic, and the park’s trails offer beautiful views of the surrounding city. 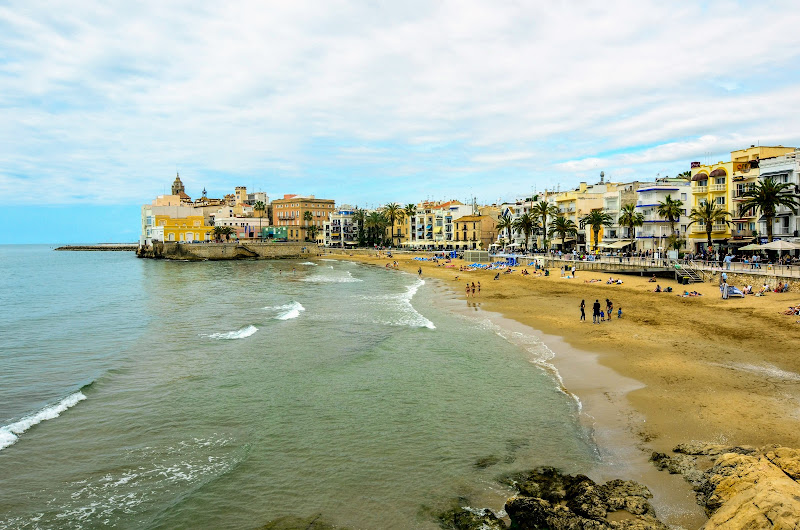 The next morning, Lauren and I took the train to Sitges, a beach resort town southwest of Barcelona. Crawling with tourists and partiers during the heights of summer, we visited early enough in the season that the town was still relatively quiet. We strolled along the Sitges’s winding roads and beaches and had some delicious drinks and tapas, a perfect way to spend our last day in Spain.