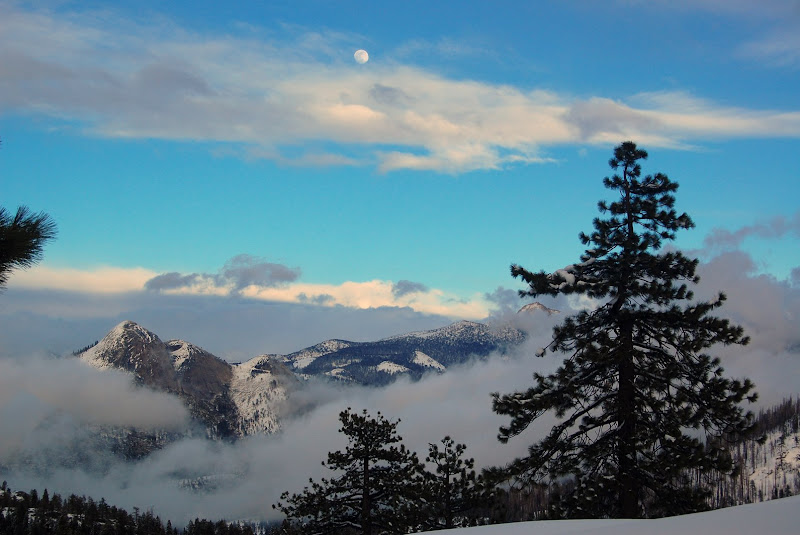 One of the most popular winter activities in Yosemite National Park is skiing or snowshoeing Glacier Point Road. The road is closed to cars in winter beyond the Badger Pass Ski Resort, but most of the road is groomed, making the 10.3 mile road a relatively easy ski route. The reward is a spectacular view of Yosemite Valley. 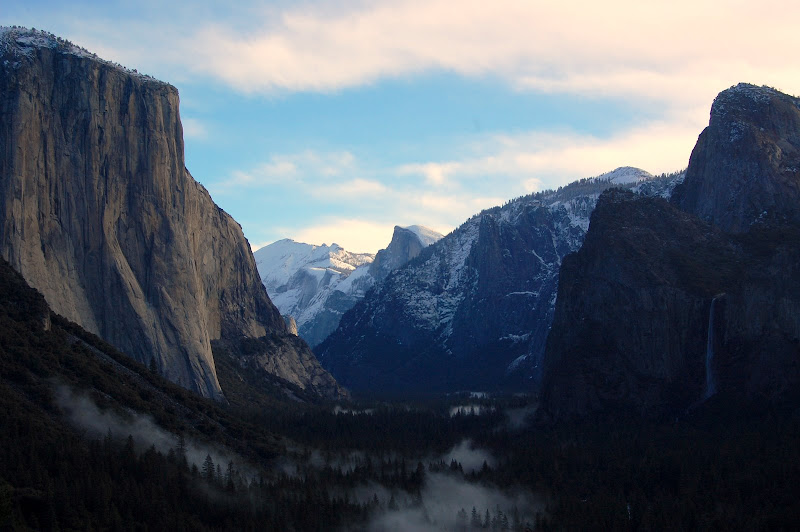 We drove to Yosemite on a Saturday morning. About ten inches of snow had fallen over the previous two days, which meant fresh powder for us but did not bode well for road conditions. Sure enough, the infrequently-plowed roads in the park required chains. We reached Badger Pass before noon, got a back country permit, divvyed up food and gear, and strapped on our skis. 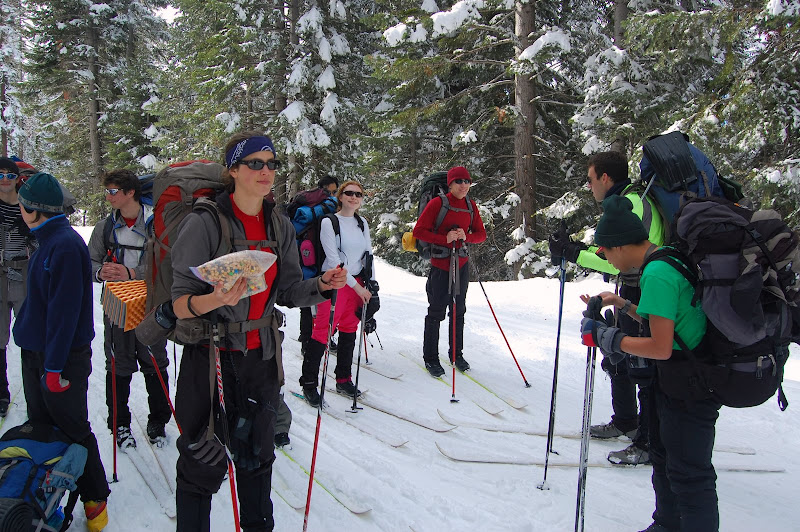 Skis on and ready to go!

The first part of the road was relatively mellow up-and-down terrain, with almost no net elevation gain. Our obsolete NNN-BC scaled skis worked just fine. The weather was gorgeous—a break in the storm had brought relatively warm, sunny weather. The snow was a little wet and heavy, but the groomed road and well-defined ski tracks made the going pretty easy. After the first few miles, the road began climbing steadily. We gained an incredible view of the mountains beyond as the road continued to rise. 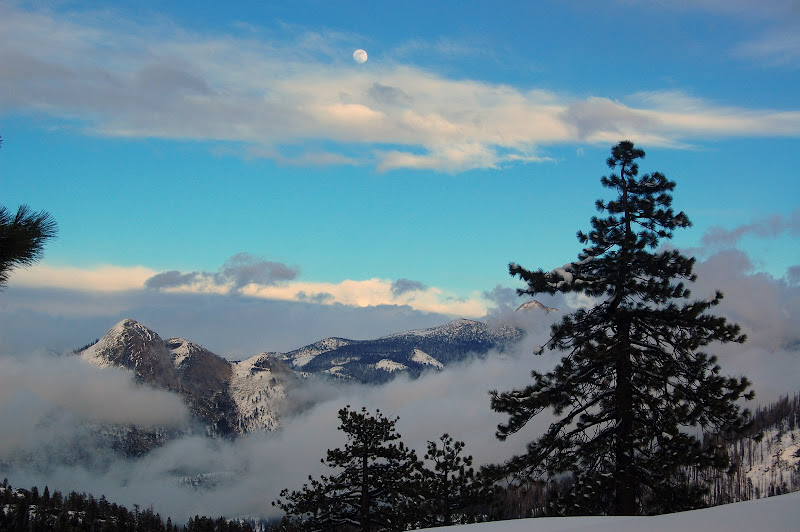 Moonrise from our kitchen

Around 4:30 we turned left off the trail and climbed a steep ridge. A few hundred feet from the trail we found a flat spot ideal for our campsite. We set up tents and dug a snow kitchen on a ridge that boasted a spectacular view. As the sun set, we cooked a pasta dinner and watched the moon rise over the distant peaks. After dinner we shared a dessert of cookie dough. Then we piled into our tents and went to bed.

We woke up around 6 the next morning, and half of the group decided to push on as far as we could go. We were still several miles short of Glacier Point, so we weren’t sure whether we could make it all the way there before we had to turn around. But we knew the going would be easier without our backpacks, so we ate breakfast and left camp as quickly as possible. 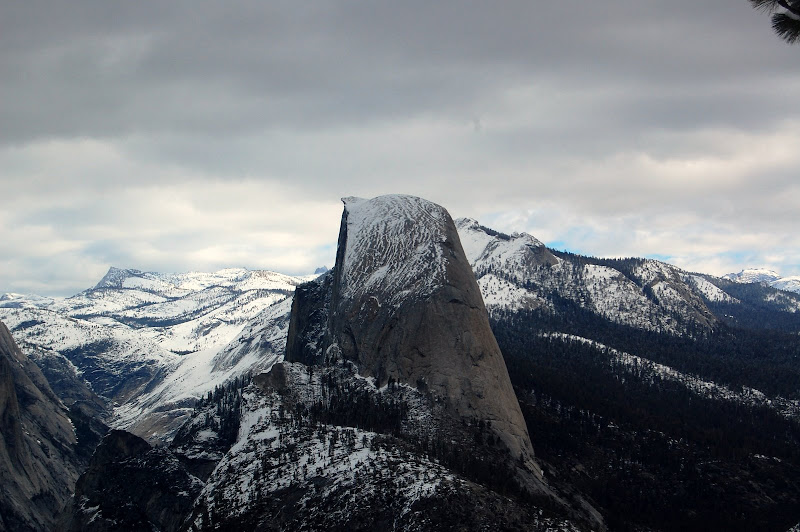 Half Dome from Washburn Point

The road continued to climb for another mile or so beyond our campsite. Then it flattened out briefly and began a steep descent. Our turnaround time was approaching, but we pushed on as far as we could. We managed to reach Washburn Point, about a mile short of Glacier Point. Washburn Point sits southwest of Half Dome, and provides a breathtaking vista including Nevada Fall, Vernal Fall, and Half Dome itself. We took in the view for several minutes before turning around and heading back to camp. 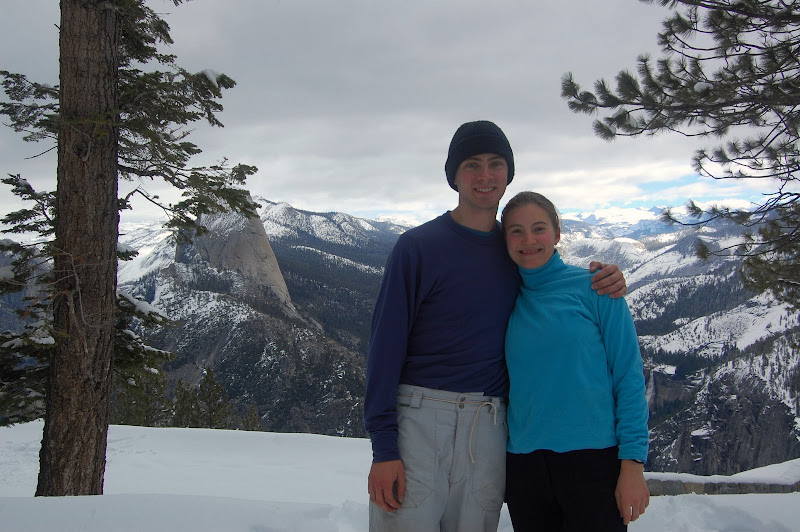 Kate and me at Washburn Point

We met the rest of our group, broke camp, and headed back down Glacier Point Road towards Badger Pass. We arrived at the parking lot in the early afternoon, beating the storm forecasted to move in that night. There was no chain requirement when we left Badger Pass, so the drive out went smoothly. We stopped for dinner in Manteca and then returned to campus.