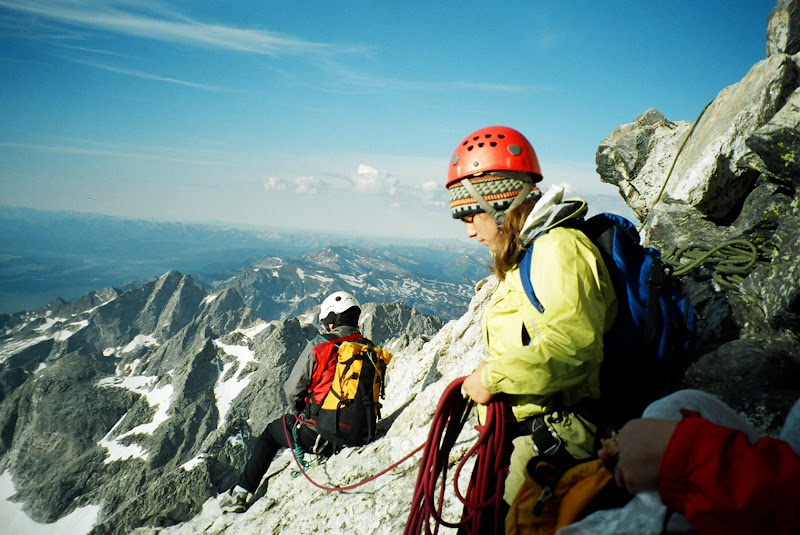 I’ve flown into Jackson Hole, Wyoming twice now. But, no matter how many times I do it, I will never cease to be blown away by the final approach to Jackson. The small airport only takes prop planes and very small jets, and both times I was on a prop plane. If you look out the plane’s right side as you approach Jackson from the north, abruptly to the west rises the Teton mountain range, its grey and brown rocks speckled with snow patches and glaciers. Since the plane was so close to landing, even the more modest peaks of Middle Teton, Teewinot, and Mt. Owen stand about four thousand feet above your window. But between Middle Teton and Teewinot the unmistakable form of the tallest mountain in the Tetons—the aptly-named Grand Teton—carves out its place on the horizon. 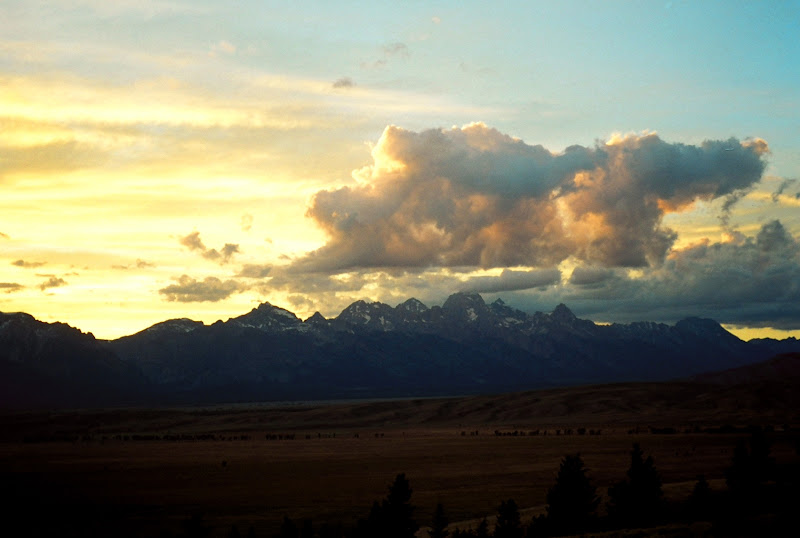 The Tetons from near Jackson Hole

I made my first attempt at climbing the Grand during the summer of 2004 as part of a wilderness leadership training program (see backpacking in the Bitterroots). The climb was the culmination of our month-long trip, and over the four weeks we had together, the members of my group had grown extremely close. So it was difficult when our trip leaders gathered us at dinner the night before we started training to prepare us for the possibility that we might not all summit, or summit by routes of different difficulty. We didn’t want anything to intrude upon the relationships we had grown to cherish.

We were climbing with the world-famous Exum Mountain Guides, who require novice climbers to participate in two days of rock climbing training prior to embarking on a Grand summit attempt. The training is easy bouldering and roped climbing in an area near Jenny Lake. It’s more to give people a background in using their equipment than to weed out weak climbers, though that’s been known to happen. 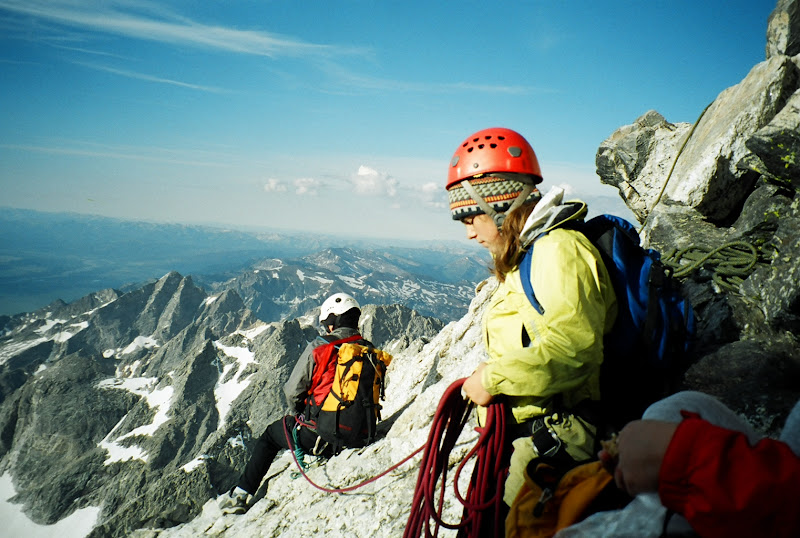 Our training complete, we were ready to start the climb. Our group of sixteen divided into four rope teams, each led by an Exum guide. We left from the Garnet Canyon trailhead and hiked 6.7 miles up about 5,000 feet to a hut at 11,200. The hut, maintained by Exum, had sleeping bags, pads, and stoves for us. We hung out, ate dinner, and went to bed early.

We woke up around 3:00 the next morning and forced down oatmeal and hot chocolate for breakfast. Harnesses were pulled out of backpacks and headlamps put on. When we assembled outside, our lead guide announced that everyone was going by the same route: the tougher (5.4 – 5.5) Exum Ridge route. The other option was the route of the first ascent, known as the Owen-Spalding route (5.3). My rope team was the first to set out.

After hiking several hundred yards, we made a right turn to the rocky pathway known as “Wall Street”. The sun was just rising, which was good because the technical climbing was about to begin. We climbed a few pitches with no major issues. I was climbing sweep (last on the rope team), so I would often reach the end of a pitch and find a few of my teammates still waiting for a climber above them. Once when this happened, I turned to look at the Tetons to the south. 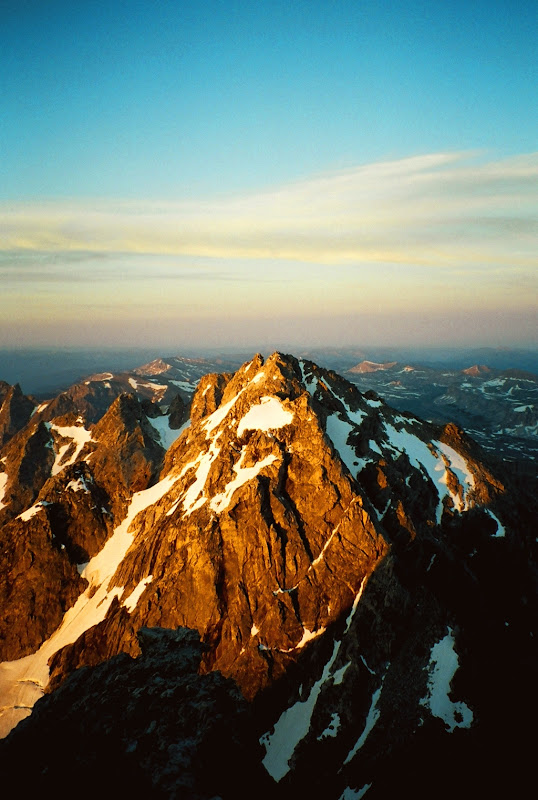 Middle Teton from the Grand

An incredible sight greeted me; the rising sun illuminated Middle Teton, a neighboring peak, with a soft golden glow. We had been looking up at Middle Teton for a month and now it was a thousand feet below us. I snapped a picture before turning back to the climbing. That picture (at left), more than any other artifact of my backcountry adventures, represents all of the struggles, accomplishments, and unforgettable moments that I have encountered while exploring the wilderness. 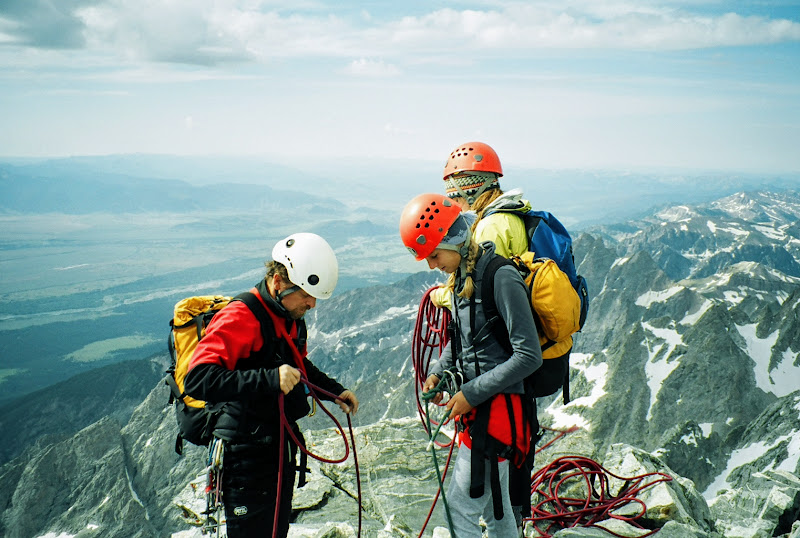 Gathering up our ropes at the summit

The climb continued. The Exum Ridge route consists of somewhere around 14 pitches. What consitutes a “pitch” (a section of a climb made on a single belay) is highly subjective; it depends on the length of rope used and the topography of the rock being climbed. So some people say the route has only 10 or 12 pitches while others say as many as 18 or 20. In any case, undoubtedly the most harrowing pitch for beginning climbers is known as the “Friction Pitch.” The Friction Pitch is a narrow segment of fairly steep rock with several thousand foot drops on both sides. There are almost no holds on it, so climbers are forced scamper up the pitch by turning their hands and placing the fleshy parts of the hand beneath the palm on the rock to create friction.

With the Friction Pitch behind us, the rest of the climb was fairly smooth. There were some tricky moves, but for the most part the climbing was very straightforward. The final pitch, known as Boulder Problem in the Sky, gave us no trouble. After that is was an easy hike to the summit. 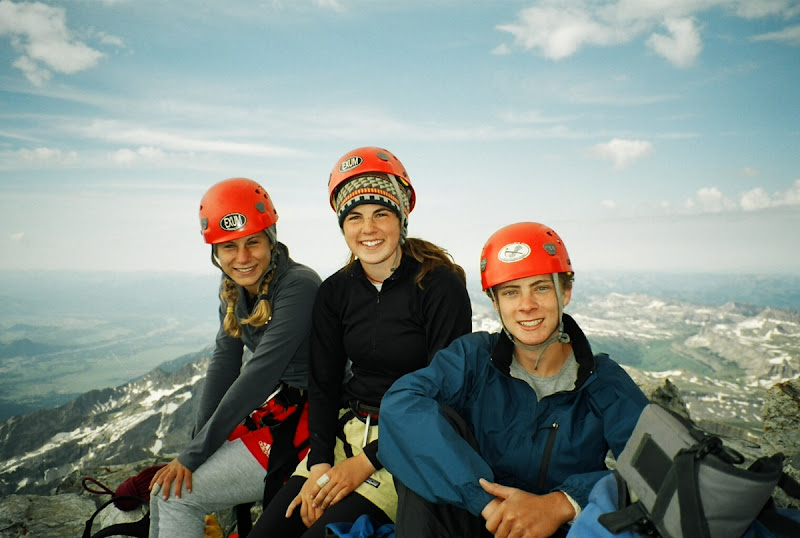 Sarah, Sutton, and me on the summit

We reached the summit around 10:00, and within half an hour the entire group had joined us. It was an incredible feeling to stand on the highest point visible in any direction with my close friends. We spent another half hour or so talking, snacking, drinking and resting before starting back down the mountain. 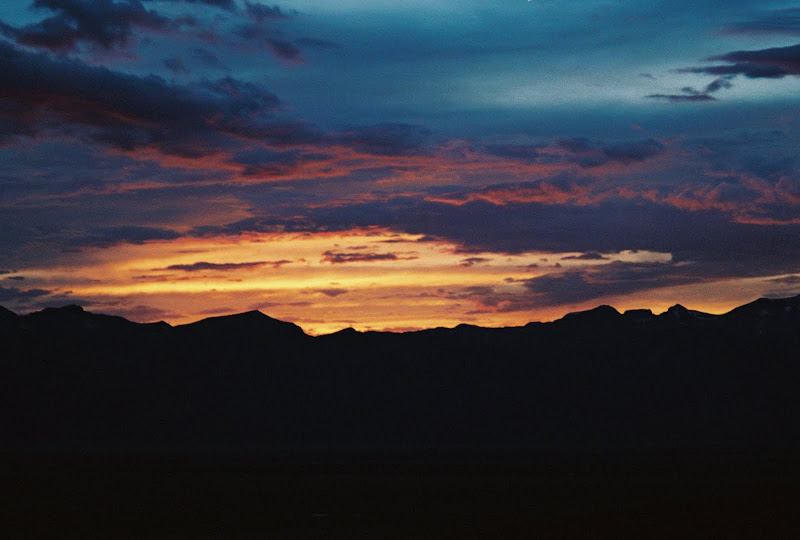 Sunset over the Tetons

Down climbing the Exum Ridge route is technically very difficult, so we took the easier Owen-Spalding route (see Grand Teton 2005 for my ascent of the Owen-Spalding route). After a short hike, we reached a pair of fixed ropes set up for a rappel. We clipped in using Super 8′s, and lowered ourselves down the 130-foot cliff.