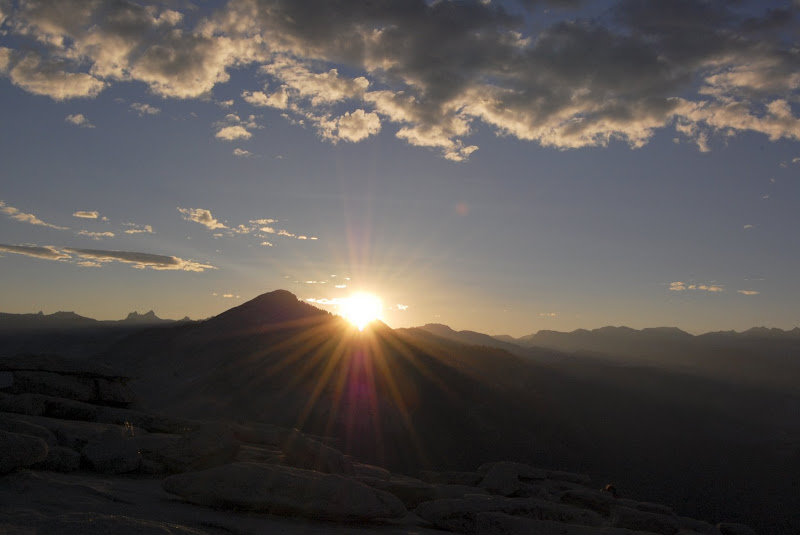 At the end of June during the summer of 2008, I left for Yosemite with a group of Stanford Outdoors leaders. Our goal was to watch the sun rise from the top Half Dome.

We left campus late on a Friday afternoon. The drive was relatively painless; there was no traffic, but we were hampered by thick smoke from the forest fires burning in hundreds of locations across the state and endless stories about pet hermit crabs. We stopped for dinner at a place called Ofelia’s Taqueria in Tracy. We found a number of interesting items in our burritos, and none of us will be returning there. 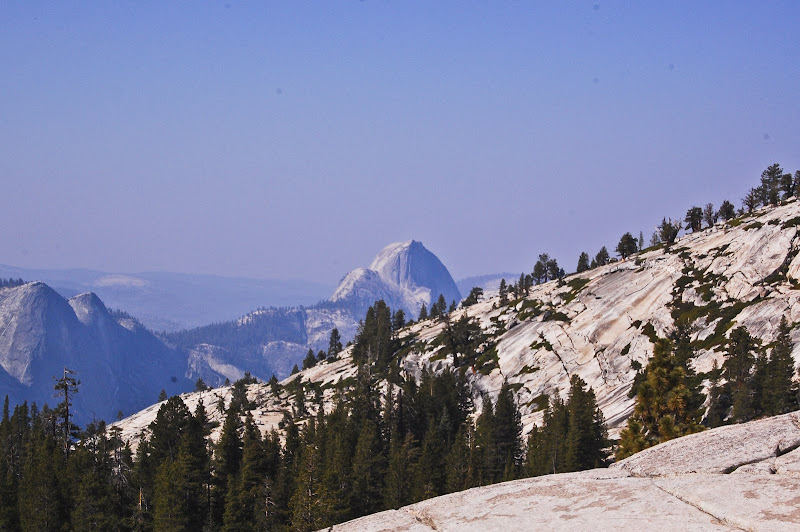 When we entered the park, it was already dark. However, the sky was remarkably clear. We had been very worried about the fires and smoke, so were happy to see an incredible display of stars when we rolled into White Wolf campground. It looked like the weather would be perfect for our climb the next morning. 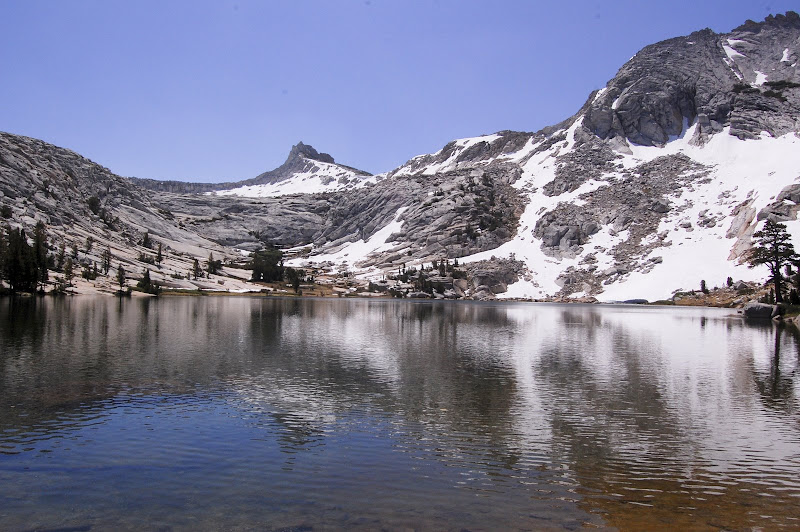 Saturday morning dawned clear and sunny. We drove to Tuolumne Meadows and parked. Hiking away from the meadows, we followed the trail towards Cathedral peak. The trail took us to Budd Lake, a beautiful but frigid alpine lake surrounded by massive granite peaks and ridges. We spent the early part of the afternoon there, eating lunch, relaxing, and swimming in the freezing waters. After a few hours, we returned to Tuolumne.

We decided to do another short hike before returning to camp. Leaving Tuolumne the other direction this time, we hiked along the western edge of the meadows, following a gorgeous but little-used trail that took us to the Tuolumne river near the top of the Grand Canyon of the Tuolumne. After about a mile we reached a series of cascades that flowed among shady glades and granite slabs. We rested and soaked our feet for a short while, and then we returned to our campsite at White Wolf.

After a delicious dinner of NOLS’s Gado-Gado, we went to bed. The time was 8:00 PM.

At around 11:30, we woke up and broke camp, trying to avoid waking other campers. We drove out of White Wolf and down into the valley, parking near the Half Dome trailhead. Storing our attractants in the bear bins at the parking lot, we set out shortly after midnight.

Climbing the Mist Trail in the middle of the night was a surreal experience. Normally so clogged with tourists that it resembles a theme park more closely than a national park, the trail was all but deserted at midnight. We didn’t see any other hikers for the first three or four hours.

The night sky was again stunningly clear. We lit our way with headlamps, but the stars above still shone brightly. Distant rolling shapes scoured an angular horizon, but it was impossible to make out any specifics, even the unmistakable profile of the summit that was our objective. 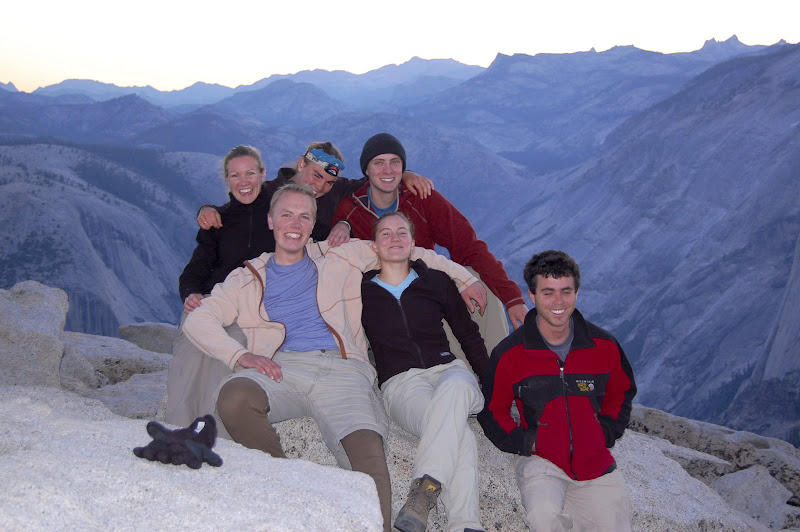 The Mist Trail takes its name from the mist generated by Vernal Falls, the first of two major waterfalls along the trail. As we approached the fall, it slowly came into view, a milky white curtain against a jet-black landscape. We stood for several minutes admiring the fall in the darkness of the night.

At about 3:30 AM, we caught up with another group that evidently had similar designs on the sunrise. They were the first people we’d seen since leaving the trailhead. We passed them relatively quickly and continued upwards. 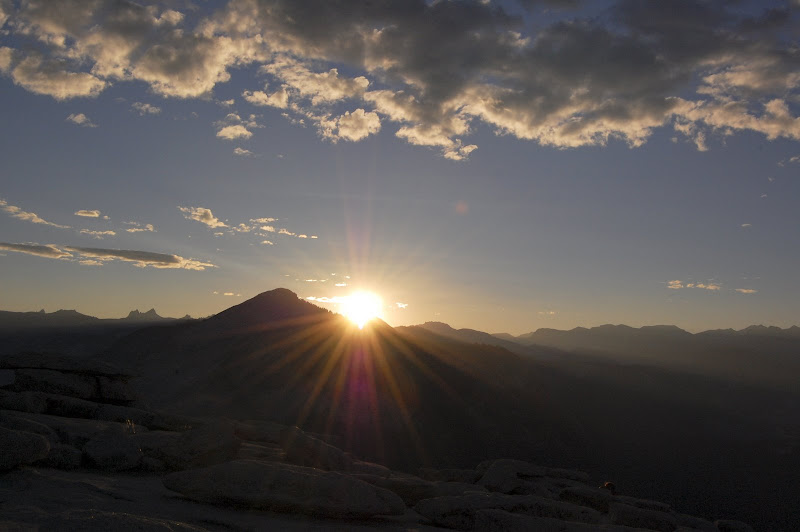 The sun rises from behind Cloud's Rest

When we reached the final approach to the summit, the sky was beginning to lighten, though sunrise was still about an hour away. The last portion of the hike is made possible for non-climbers by a set of cables installed by the Park Service that allow hikers to hoist themselves up the steep granite. We borrowed some of the work gloves left for general use beneath the cables and made our way to the top. 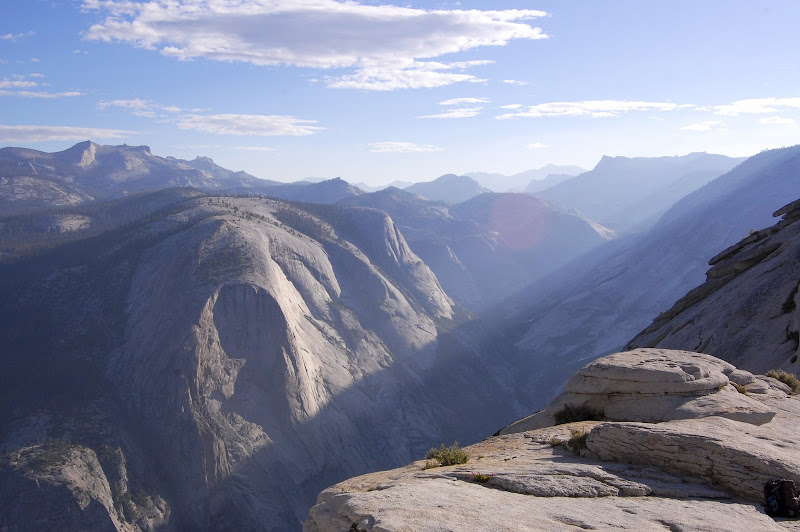 There were four people on the summit when we reached it, but the summit was easily large enough to allow each group some solitude. As the landscape slowly came into view with the rising sun, we snapped pictures and ate a breakfast of croissants and juice.

Finally, the sun made its grand entrance, from behind the summit of Cloud’s Rest. Its rays flowed into the surrounding valleys and depressions like liquid gold. Half Dome’s striking profile was captured in shadow against Glacier Point. We stayed on the summit for over two hours, enjoying the incredible views and relative tranquility of Half Dome in the early morning.

We descended the cables a little after 8 AM. The hike down was arduous. We were tired, and the day was growing hot and dusty. The trail, which had been empty on the way up, was now so congested that we often had to stop and let large groups of people go by the other way. Being able to see Nevada and Vernal Falls helped to make up for the crowded trail.

When we reached the valley floor, we stopped for a late lunch of pizza. Then we returned into our cars, exhausted but exhilarated, and slept for a good portion of the ride home.