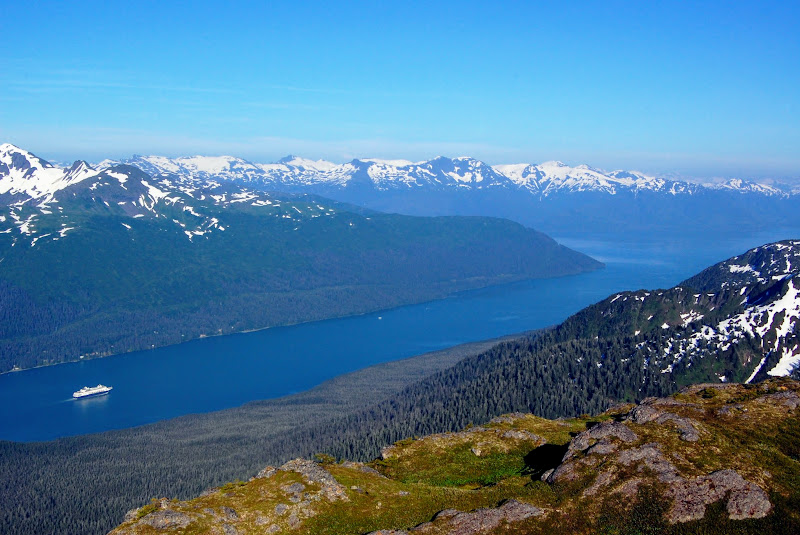 After my second year of law school, I spent half of my summer working at a big law firm in New York City and half working at Earthjustice, an environmental law firm, in its Juneau, Alaska, office. I flew to Juneau in late July and sublet a room in Douglas, a small town on an island just west of downtown Juneau. For a state capital, Juneau is a small town, of only about 30,000 people. Like most Alaskan towns, Juneau gets much bigger in the summer. That effect is amplified because Juneau is a stop on the cruise ship routes, so seasonal workers flock to the city in the summer to staff the hotels, restaurants, and adventure tours that cater to the passengers.

Every day, I commuted from Douglas to Juneau on a borrowed bike (or, on the more common rainy days, took the bus) and spent my time in the office researching and writing about environmental law issues. I worked on challenges to permits for oil companies to drill in the Arctic Ocean, protection of the Steller’s sea lion, and preventing roading in the Tongass National Forest. The work was interesting and rewarding, and I really liked my coworkers. 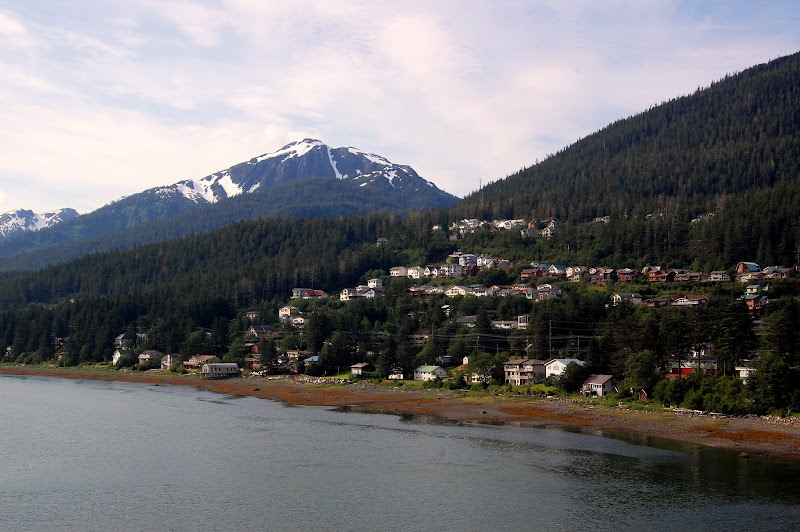 I spent my weekends and afternoons exploring the mountains, trails, glaciers, and bays in the areas around Juneau. Known for its bad weather, Juneau experiences “summers” dominated by cloudy gray weather, often rainy, in the mid-50s. However, most weeks had two days or so that were beautiful and sunny, usually in the high 60s or low 70s. On one of those gorgeous days, I left worked early and biked home, planning to attempt a climb of 3,337-foot Mount Jumbo (also known as Mount Bradley). I’d read that the climb was an all-day hike that would take 7-8 hours. So when I left my house in Douglas at 4:30 PM, I didn’t expect to be back until about 10 PM. 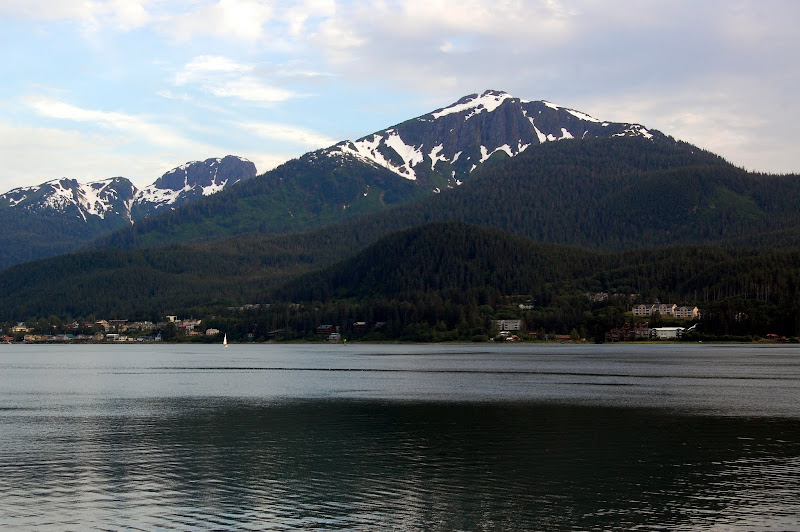 It’s an incredibly liberating feeling when you walk out your front door to hike up a mountain. There simply aren’t very many places where it can be done, but Douglas is one of them. The Mount Jumbo trailhead starts on Fifth Street, and winds its way up through the forest on the mountain’s eastern slope. After a few hundred feet of elevation gain, the trail flattens out into a marshy (and very muddy) meadow. Fortunately, there are wooden planks over the meadow that provide both an obvious route and insulation from the marsh.

On the far side of the meadow, the trail begins to climb steeply again. Conscious of my late start, I set a very quick pace up the slope. The going was made difficult by the late snowpack, which still covered parts of the trail and turned others into streams. My running shoes got soaked through by the time I gained the top of the mountain’s eastern ridge. The east face of Mount Jumbo, which faces Juneau, appears quite imposing–a steep rocky cliff partially covered in snow. Fortunately, the trail curves around the summit to the south, so that the final approach comes from the southwest. Minor (class 2) scrambling was required, but the most difficult part of the climb turned out to be descending the steeper snowfields. 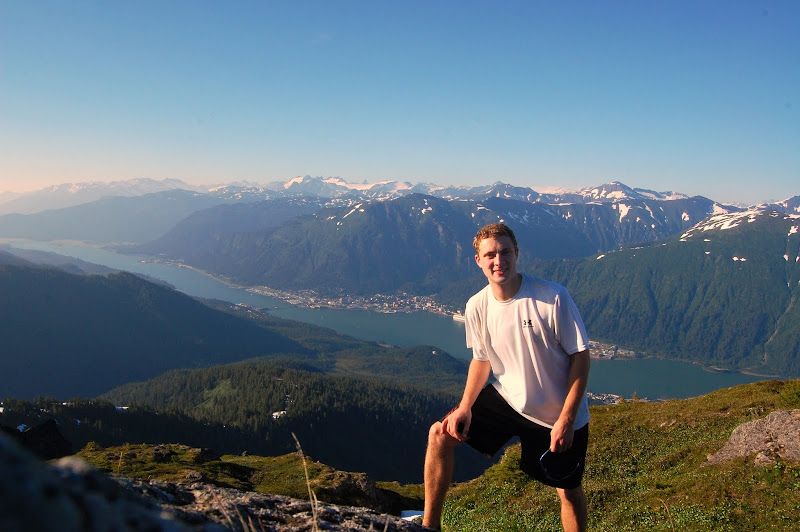 Almost exactly an hour and a half after leaving my house, I was standing on the summit. The view was spectacular. To the east I could see the Gastineau Channel, with Juneau beyond it, and snow-covered peaks in the distance. To the south, the Channel faded into a shockingly blue ocean with seemingly endless rows of towering mountains disappearing into the horizon. To the west and north were more snowy peaks and blue ocean as far as the eye could see. I spent about half an hour on the summit, resting and admiring the incredible views, before I started back down. 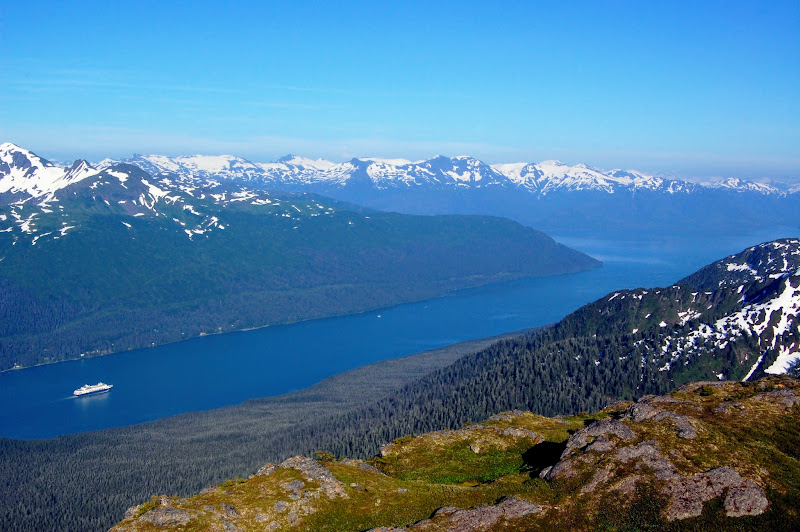 Looking southeast from the summit

The return trip took a little over an hour, mostly because the steep trail made slow going. A few times, I had to slide down steep snowfields that covered the trail. I was home by 8 PM. I took a shower and then walked over to the Island Pub, my favorite restaurant and bar in the area for some delicious pizza and an Alaskan Summer Ale. If you’re ever in Juneau, the Mount Jumbo hike is a must. It’s one of the best views for the least work of any hike I’ve ever done.

After a few weeks in Juneau, Shawn, one of the lawyers in my office, arranged for Josh, the other summer intern, and me to go on a whale watching trip. It was a cloudy rainy day, so we bundled up in warm jackets and waterproof gear. Before boarding our boat, our guides took us on a hike out to the Mendenhall Glacier and explained some of the history, geology, and botany of the area. I spent a summer in Alaska in a valley filled with enormous glaciers, but every time I see a glacier like the Mendenhall, I’m overcome with the grandeur of the massive river of ice. 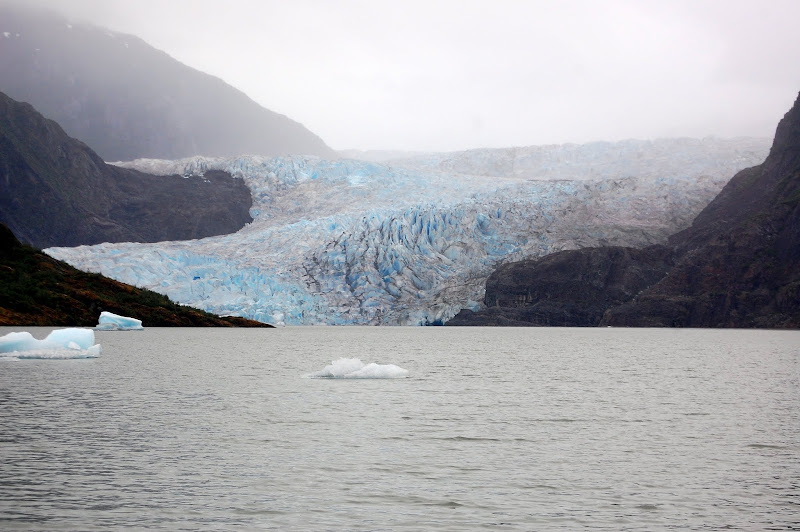 After our tour of the glacier, everyone stepped aboard the Mariner, a small but powerful whale watching boat with (crucially) a large interior area to protect us from the rain. We steamed out into Auke Bay and along Admiralty Island. Most of the whales in the area are humpbacks, but the first ones we saw were a pod of orcas cruising along near the coast. We watched the orcas for about twenty minutes, and then continued sailing out into the bay. Apparently the bad weather wasn’t a problem for the whales, because we saw plenty of humpbacks diving throughout the bay. Despite the rain, I spent most of my time outside on the deck where I could see the whales better but cold spray constantly tried to sneak past my rain jacket. After a few hours of whale watching, it was time to return to the harbor and have a warm cup of hot chocolate. 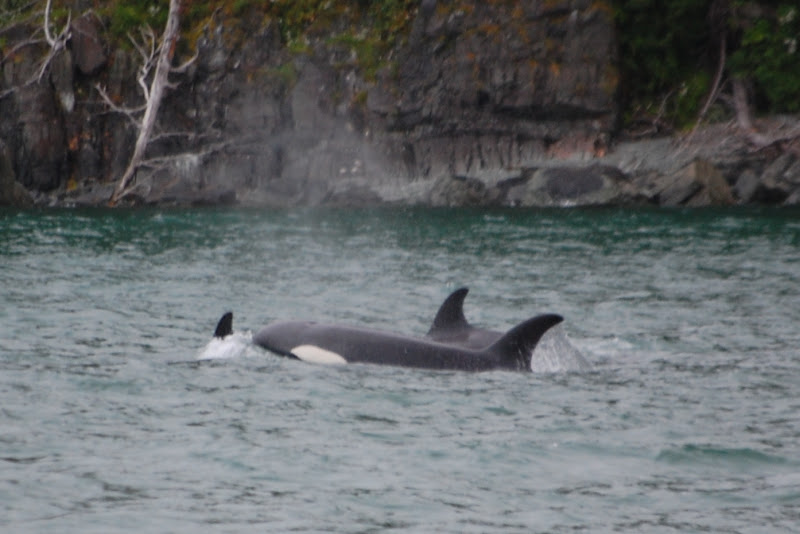 The best day of my summer was a beautiful, sunny Saturday in early August. In the morning, I took the bus with my friend Rachel out to the Mendenhall Glacier. We followed the trail around Mendenhall Lake up to the western edge of the glacier. The hike was fun because the trail wasn’t always well-marked, and we had to find creative ways to scramble over ridges and scree to make our way to the glacier. Once there we reached our real goal: ice caves that form along the edge of the glacier. The dense ice refracts the light to a stunning cobalt blue that permeates the entire cave. 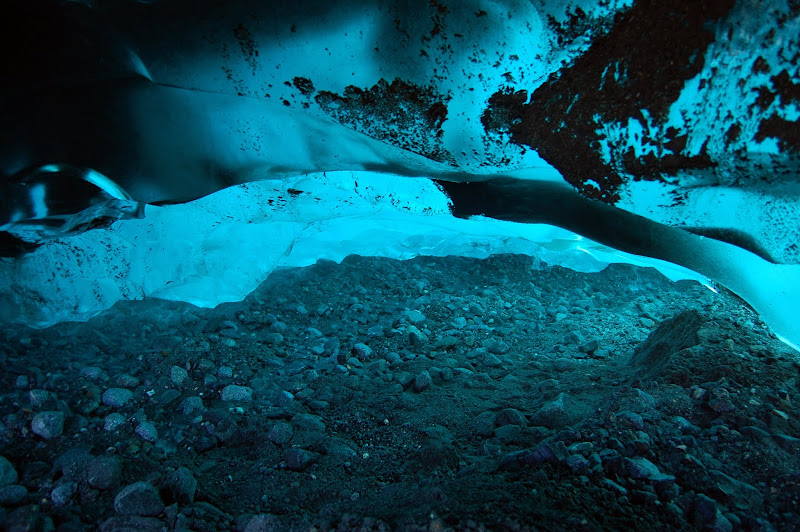 During our exploration of the caves, we were joined by two other people who had kayaked across the lake instead of hiking. We discussed the incredible caves for a while and then went our separate ways–Rachel and I back up the trail, and the kayakers back to their boats. Just as we crested the glacier’s terminal moraine, we turned at a loud crashing sound to see a massive chunk of the glacier closest to us calve off into the lake. As the water foamed angrily large waves crashed along its shores below. We saw that one of the kayaks had been swept out into the middle of the water. One of the kayakers had also been caught by the frigid water, but his partner caught him and then paddled out to retrieve his boat.

Rachel and I hiked back to the road, where another friend picked us up and drove us to the home of a local judge, for whom another of our friends was working that summer. The judge, who owned a beautiful house overlooking Auke Bay, had offered to take a group of legal interns out in his boat. We boarded with a collection of sandwiches, snacks, and beers, and set out into the Bay. The weather couldn’t have been more different from my last boat trip; the sun was shining and it was warm and comfortable outside. Again, we were looking for whales, but this time we paused in the middle of the bay to watch sea lions wrestling on a buoy. 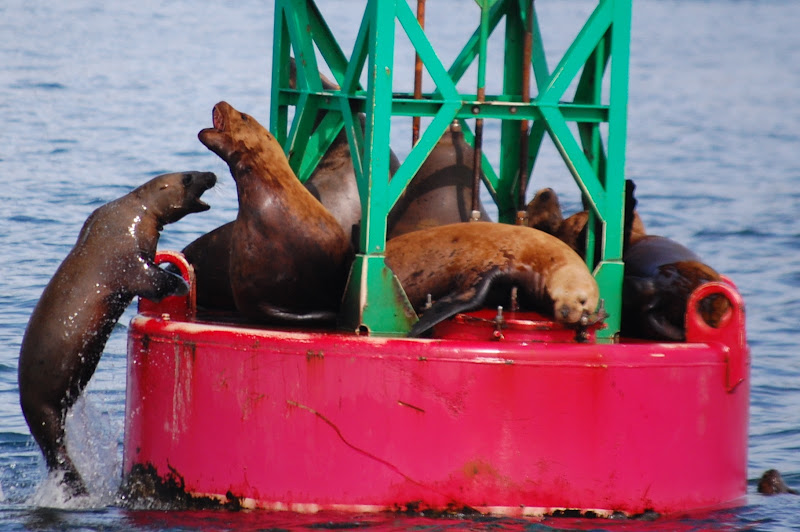 We passed the sea lions and sailed into deeper waters. There, we found that the humpacks were even more active than on our last trip. They were diving and breaching in almost every direction with spectacular mountain scenery in the background. We spent a long time watching the whales, chatting, laughing, eating, and drinking. Finally, we turned the boat around and returned to the shore. 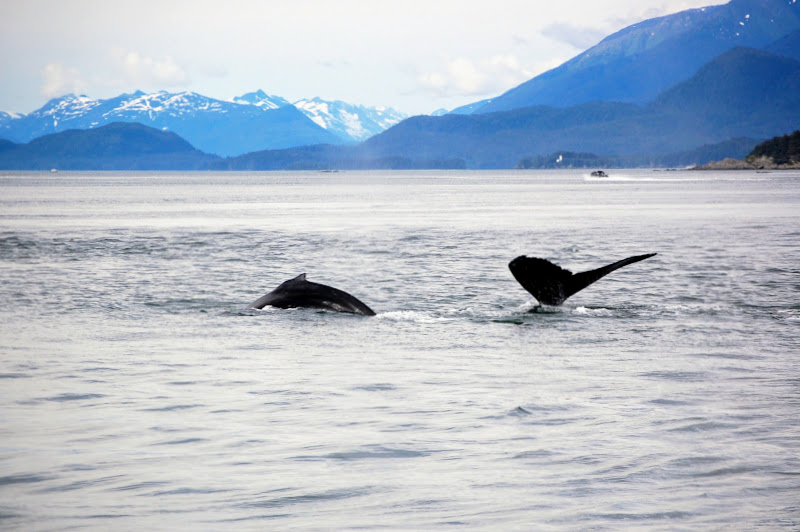 On my last weekend in Juneau, my coworker Shawn offered to take me on an overnight kayaking and camping trip. We left on a beautiful Saturday afternoon from False Outer Point on the northeastern edge of Douglas Island. We paddled for a couple of hours around the island, finally choosing a beautiful and deserted campsite in the lush green forest near the shore. We cooked a quick dinner of beans and rice, and then got into our sleeping bags for a night under the stars. The next morning we woke up and had breakfast. Then we explored the area around our campsite, where a creek ran down into the ocean. It was the tail end of the salmon run season, so many of the fish were still struggling upstream. But they were all dying–in fact, many were already dead, their carcasses littering the stream bed. We returned from our short hike, broke camp, repacked our boats, and paddled back to Shawn’s car. 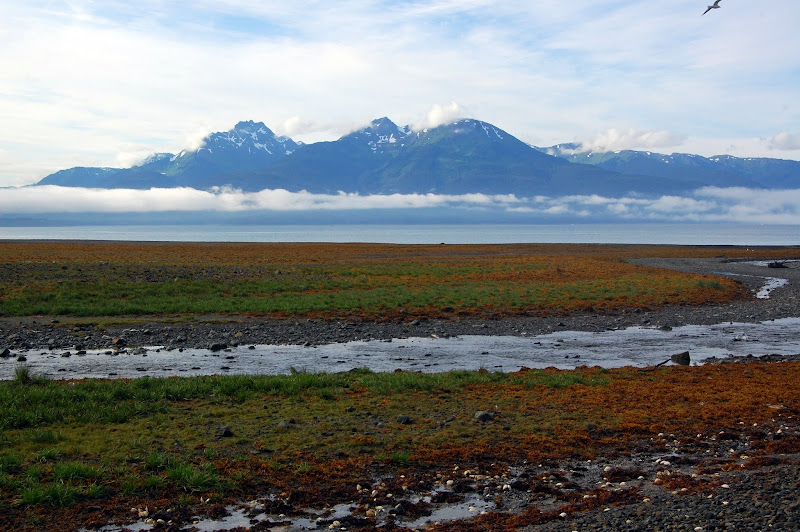 The view from our campsite

I spent the last week finishing up my work and visiting my favorite restaurants and bars for the last time. On my last nice day, I hiked up to Mount Roberts. There’s a tram that runs from the cruise ship docks to a point about two-thirds of the way up the mountain. It’s a tourist trap that costs $30–the hike is free. I kept hiking above the tram, out to Gastineau Peak. Like my earlier hike up Mountain Jumbo, this one was impeded by snowfields but ultimately rewarded with great views. The trail continued on past the peak, but the snow was so thick that it would have been dangerous to do in my running shoes. I returned to the top of the tram, where there’s a restaurant with a beautiful view, good food, and cold beer. If you show your receipt from the restaurant, you get a free ride back down the tram, which I did as the sun set on my last Alaskan excursion of the summer.