I took a red-eye to London. My flight landed at 9:30 in the morning. I’d slept fitfully, but was surprised to find I wasn’t aching with tiredness. Boarding the Heathrow Express, I rode into Paddington Station and transferred to the Underground for the last segment of my trip to a flat in Bermondsey.

We started our tour of London with nearby Borough Market. The market features lots of food, including meat, dairy, and baked goods. We wandered the stalls and ate lunch before venturing into Westminster. We walked around the Palace of Westminster and Westminster Abbey. I very much wanted to see the abbey, but it was closed for events commemorating the hundredth anniversary of Armistice Day. Despite my disappointment, it hard not to enjoy a beautiful sunny fall day, and we strolled through the grounds of Westminster, overflowing with flowers and memorials for those who died in World War I. 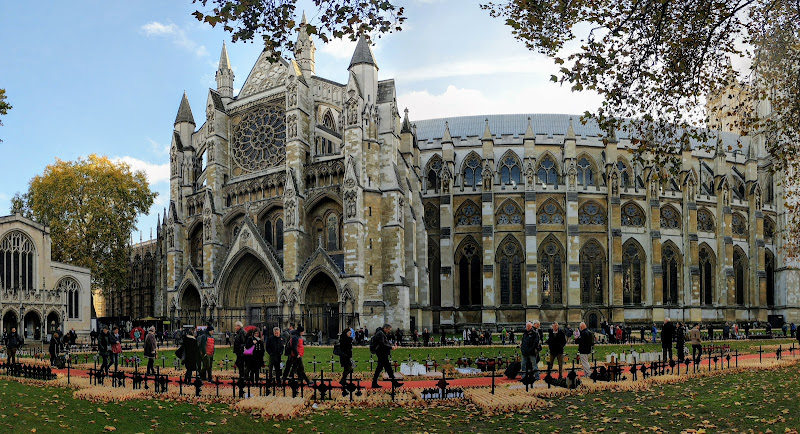 We walked northwest through St. James’s Park into Piccadilly, where we enjoyed a delicious high tea at Fortnum and Mason. I ambled through the streets of Piccadilly to the National Museum which was open late because it was a Friday.

The next day we visited the Imperial War Museum. An enormous building housing fascinating exhibits about British military history, the Imperial War Museum had a special expanded World War I exhibit to celebrate the hundredth anniversary of the war’s end. We also really enjoyed the small, out-of-the way exhibit on intelligence and special operations.

In the afternoon, we caught a train onto the continent, through Brussels, and into Bruges. A small town on the northwest coast of Belgium, Bruges’s cobbled streets, canals, and stone buildings burst with medieval charm. The city was thankfully spared the destruction of both world wars and remains beautifully preserved. We arrived late at night, so we had a quick drink at a beer bar before retiring to our hotel. 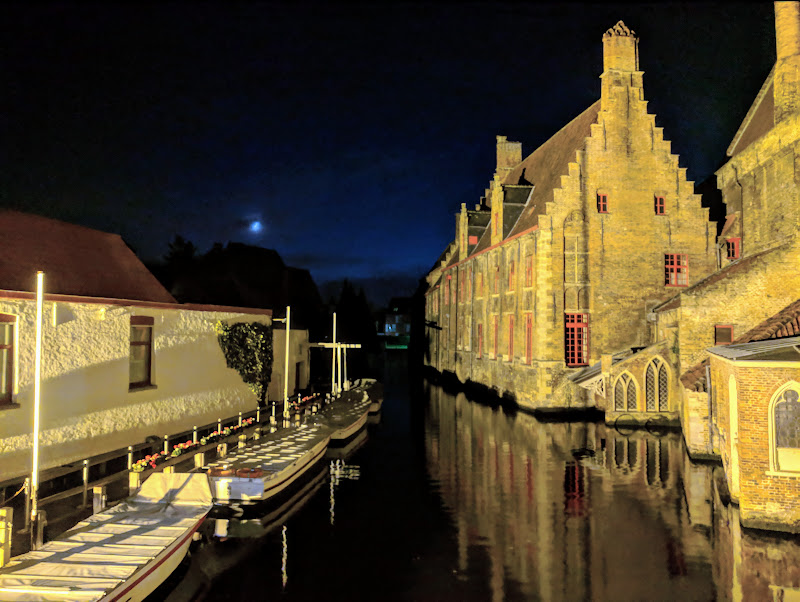 A pastry breakfast started a cold and cloudy Sunday morning. Our first stop was Sint-Janshospitaal, a hospital dating to the eleventh century that’s now a museum. The museum has a large exhibit on medieval medicine and an impressive array of medical instruments from the Middle Ages. There’s also a collection of works by Flemish primitive painters and some other artistic works, including the Diptych of Maarten van Nieuwenhove. Van Nieuwenhove was a nobleman who served as city councilor, captain of the civic guard, and mayor of Bruges. He looks shockingly like Adam Driver.

We left the museum and took a tour of Bruges’s canals by boat. Then we had a quick lunch and toured some of Bruges’s other historical sites, including the Stadsbestuur Brugge (City Hall), Brugse Vrije (eighteenth-century courthouse), and the Basilica of the Holy Blood.

The sun began to emerge from behind the clouds in the afternoon, so Lauren and I rented bikes and rode around the outside of Bruges’s old town, where the city walls used to be, now a charming grassy embankment dotted intermittently with windmills. We turned northeast onto a bike path paralleling the Damme Canal. Constructed on Napoleon’s orders in the early nineteenth century, the canal is a beautiful, tree-lined waterway that stretches across the border with the Netherlands. 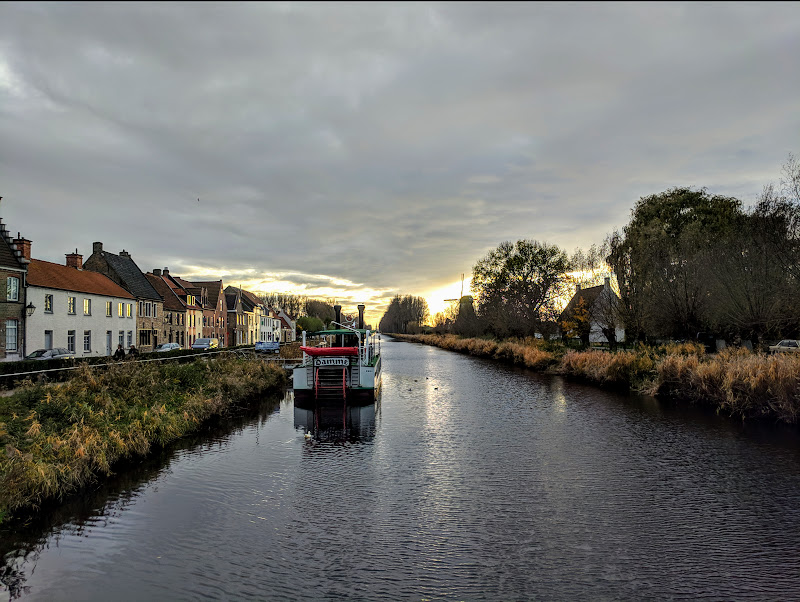 We didn’t ride quite that far. We locked up our bikes in Damme, another quaint Belgian town much smaller than Bruges. Walking through Damme’s quiet streets, we admired the Onze-Lieve-Vrouwekerk (Church of Our Lady), originally constructed 1225. It remains an impressive exposition of the area’s medieval artisans and now houses a number of odd modern art exhibits. We had a beer at a restaurant in town before riding back to Bruges and enjoying a delectable dinner at Parkrestaurant.

The next morning dawned cold and rainy. Huddled under our umbrellas, we took a walking tour of Bruges that visited some of the city’s important historical sites. After lunch we took a tour of Huisbrouwerij De Halve Maan, a family-run brewery that’s operated since at least the eighteenth century. The tour was interesting and entertaining (and came with a pint included), and the brewery’s restaurant offered good food and opportunity to try one of the rarer releases.

We spent the afternoon exploring more of the town. We visited some of the chocolate shops, guzzled Belgian fries on a stone plaza, and climbed the Belfort van Brugge (Belfry of Bruges), a medieval bell-tower whose 366 steps are worth the effort for the great views of the town. 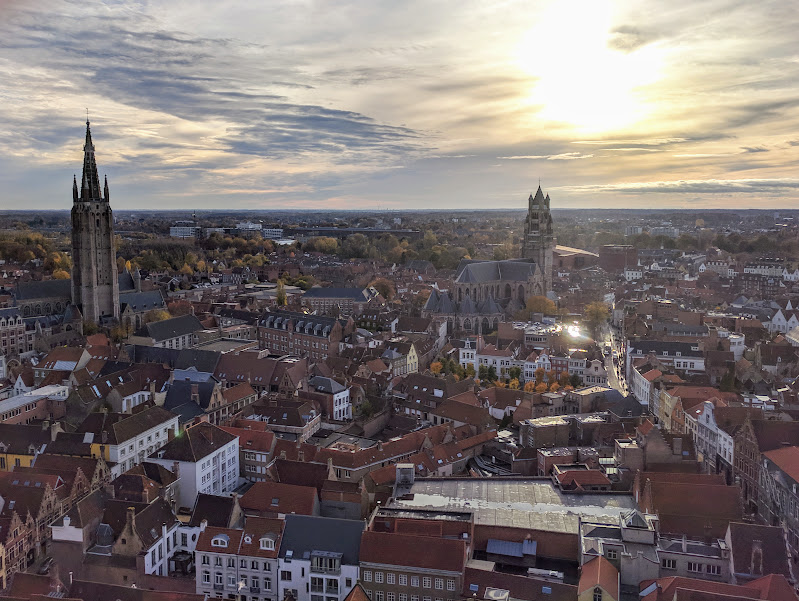 Bruges from the belfry

Our time in Bruges was nearing an end. Leaving the lovely city behind, we caught a train back to London where we had time for one more pint before going to bed and catching a flight home early the next morning.