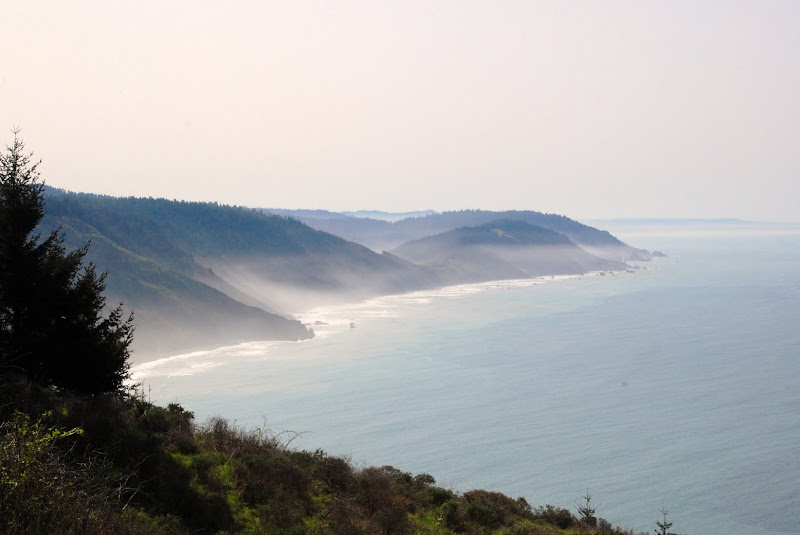 State Route 1 runs along the Pacific Coast for most of California’s length, winding steeply and sharply along some of the world’s most spectacular shores. But about forty miles north of Mendocino, the highway takes an abrupt turn east and joins Highway 101 further inland. The highway leaves the coast because that part of California is so rugged that the highway’s planners simply couldn’t build a road there. Known as the Lost Coast, the area boasts some of the most incredible coastline in the world, with steep cliffs and hills dropping straight into the ocean. 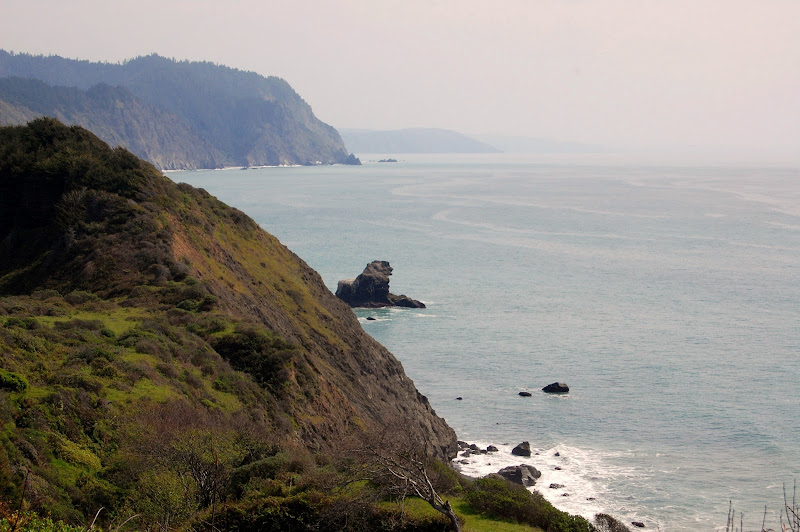 The coast from near the trailhead

In late March of 2010, I led a backpacking trip to the area to train new leaders for Stanford’s Pre-Orientation Trips (SPOT). The goal of these so-called Leader Training Trips (LTT) is to prepare our students to lead their own back country trips, specifically for incoming Stanford freshman. We teach the “hard” skills like navigation, stove use, and rigging shelters, but we also focus heavily on leadership and managing interpersonal issues to make trips run smoothly. As a result, we usually only hike a few miles each day, so we have plenty of time to teach lessons and discuss outdoor leadership. For this trip, we planned a 17-mile, four-day route from Needle Rock Visitor Center to Usal Beach. We planned to leave our cars at Needle Rock. Another group would be hiking the same route in the opposite direction, and we would meet and swap car keys halfway through the trip so each group could leave from the opposite trailhead.

The road in to Needle Rock Visitor Center is a poorly-maintained dirt road that wreaked havoc on the low suspension of our rented Ford Fusion. We managed to reach the visitor center despite the road, however, and we were soon hiking south along the coast. Shortly after we left the visitor center, the trail wound inland and we passed a small meadow in which a large herd of elk rested in the sun. 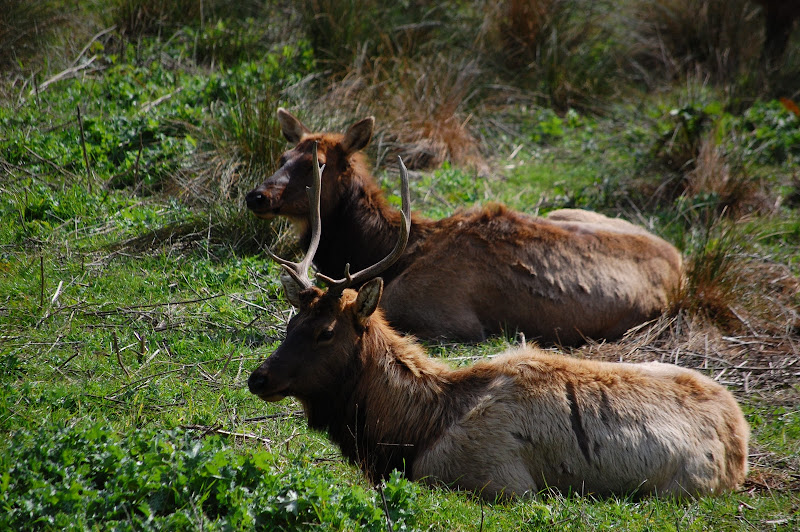 Elk resting by the trail

We stopped for a late lunch about half a mile before Orchard Camp. Passing through Orchard Camp, we continued past Bear Harbor and the trail climbed a heavily treed bluff above the ocean. The trail wound along the bluffs for a few miles and then dropped to Wheeler Camp near the beach. We cooked a dinner of cous cous and went to bed.

That night it started raining heavily, jarring most of us out of our slumbers. We tried to go back to sleep despite the raindrops pounding on our tents, and we ended up getting a late start. Most of us were not out of our tents until ten, and we didn’t start hiking until noon. Just after we left camp, we had to cross a shallow but wide and swift stream. After a brief lesson on stream crossings, we reached Wheeler Beach, a gorgeous stretch of black sand and big storm-driven waves crashing against the beach and cliffs.

From there the trail began to climb, almost one thousand feet. We hike through the rain up a heavily wooded slope, finally reaching Anderson Cliff, our high point for the day, just after two. It was a grassy cliff edge that overlooked the ocean, giving us incredible views of the coastline to in both directions. Even better, the rain had stopped, and the cloud ceiling was lifting quickly. As we ate lunch, the sun came out. 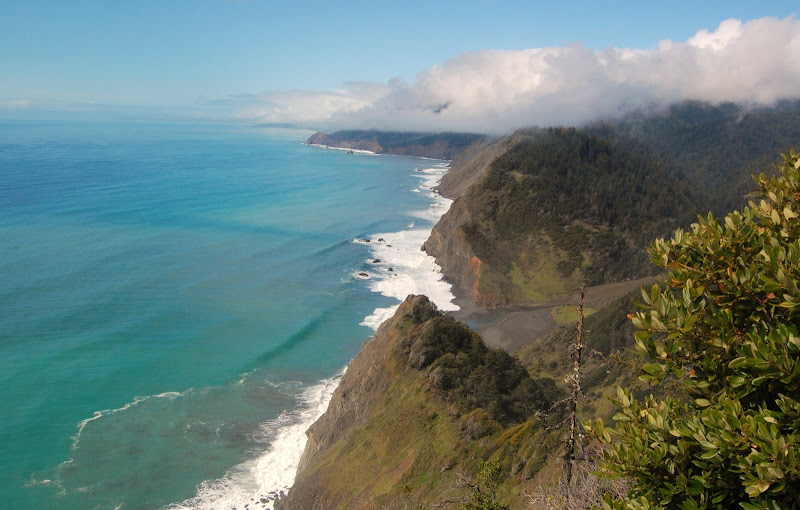 The view from Anderson Cliff

The trail wound along the bluffs for the next several miles. Every once in a while we got another great view of the coast through the trees, though nothing to rival the breathtaking vistas of Anderson Cliff. Finally the trail dropped into a narrow valley bisected by Little Jackass Creek. Our campsite was away from the beach, just past where the trail crosses the creek. Some of the leaders taught lessons on bear bagging and stove use, while one of us met the other group—camped closer to the beach, but also at Little Jackass Camp—to exchange car keys. We tried to dry our equipment in the waning daylight. Then we had a no-bake cheesecake and went to bed. 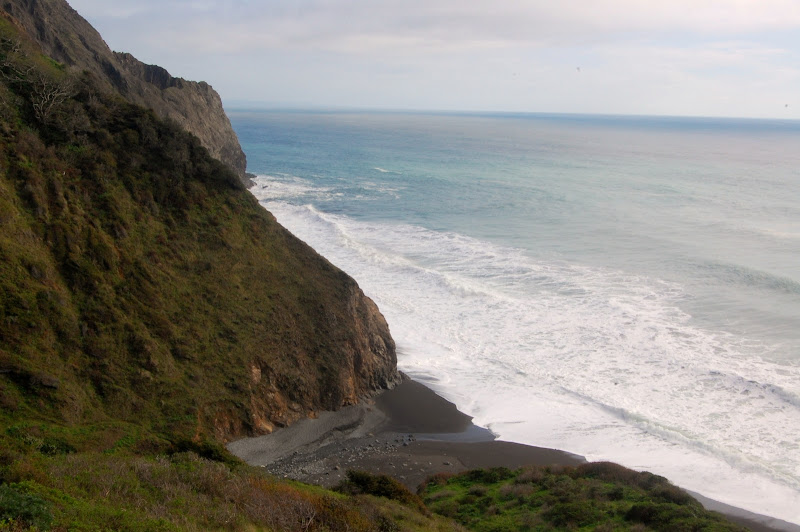 Day three of the trip was by far the shortest, only two and a half miles, so we started fairly late again. We still reached our campsite (at Anderson Camp) in the early afternoon. During lunch we ran an anaphylaxis simulation to refresh our trainees’ first aid skills. Then the group split in two, with most of us taking a hike down to the beach and the rest of us staying at camp to relax in the sun. In the evening we had a delicious dinner of pita pizzas, and we ran a missing camper simulation. Despite the short hike, it had been a long day. 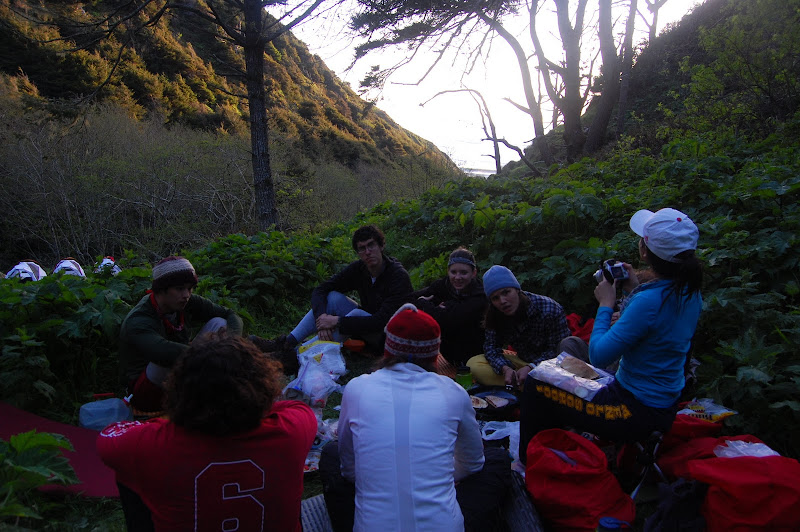 Our kitchen at Anderson Camp

The last day of our trip dawned just as sunny as the day before. We broke camp early, managing to start hiking around nine. Our four and a half mile hike followed the contours of the rugged coastline, with lots of elevation change. The reward for the strenuous terrain was another series of incredible views, especially to the south. We reached the trailhead a little before two in the afternoon. 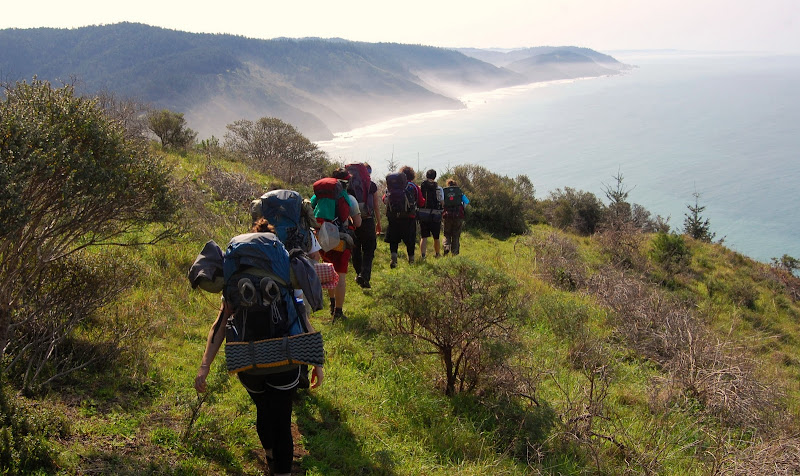 Hiking along the coast

At the trailhead we debriefed the trip and did a few closing activities and loaded our cars for the drive home. Unfortunately, there were four unmarked roads leaving the trailhead. We had been warned when swapping keys that the road into the state park was in poor condition, and the first road we tried turned out to be a poorly-maintained logging road with two- or three-foot deep trenches carved by the rainfall running down most of its length. It was impassable. Finally realizing our mistake we turned around,k though not before several hairy moments trying to push our vehicles over and through the trenches, some of which we filled in with rocks and sticks. Eventually we found the right road, and after that the trip home was uneventful.