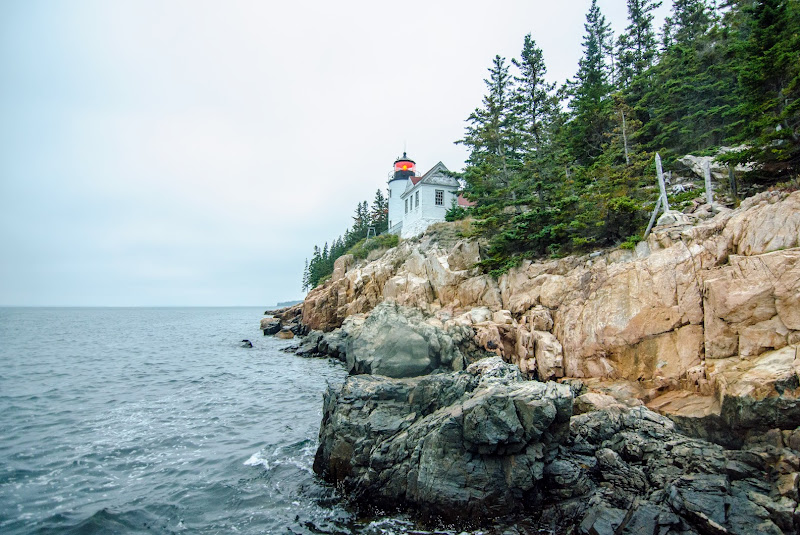 I’ve always been curious about Maine, but I’d never had an opportunity to visit. I’d planned a trip to Germany, Austria, and the Czech Republic for the fall of 2020, but then the COVID-19 pandemic struck. Americans weren’t allowed to travel to Europe, and our vacation fell through. Maine seemed like a good alternative; the state required that visitors be tested before arrival, and it had implemented safety policies at hotels, restaurants, and bars.

Lauren and I arrived in Portland at around 7 in the evening after connecting through Washington, D.C. After picking up a rental car, we drove to our hotel, the AC Hotel by Marriott Portland Downtown/Waterfront. The hotel is perfectly nice and comfortable, with a surprisingly good bar, and it’s in a great location and offers reasonable rates. Then we strolled through downtown Portland to the Thirsty Pig, where we ate dinner. We capped the night with a couple of beers at Portland Beer Hub and returned to the hotel.

We started our morning with pastries from Standard Baking Company and coffee (and hot chocolate and lemonade) at Bard Coffee. Clutching our drinks and food, we wandered through downtown Portland to the Wadsworth-Longfellow House, built around 1786 and the childhood home of the poet Henry Wadsworth Longfellow. The house contains numerous items and artifacts from the Wadsworth-Longfellow family, but it was closed due to COVID restrictions. However, the house has a pleasant garden in the back that we could stroll through.

Next we drove out to Portland Head Light. The lighthouse was first lit in early 1791, and still today it strikes an impressive silhouette against the rocky seashore. There’s also a small museum (closed) and a park with walking trails. We clambered out along a rocky promontory to get some views and pictures, then drove back to Portland. Our next stop was the Portland Museum of Art. Housed in a building designed by I.M. Pei, the museum contains a collection of works by masters as well as several local favorites. There’s also a small but interesting exhibit on Maine’s history.

After the museum, we stopped for shellfish and a drink at Eventide Oyster Co., rightly famous as one of Portland’s best seafood spots. Then we explored the city’s bustling craft beer scene. We started at Austin Street Brewery, which offered a good but mostly un-differentiable selection of hazy IPAs. Then we tried Rising Tide Brewing Company, which had a better selection of beer and delicious wood-fired pizza. We had a nightcap at Vena’s Fizz House and returned to the hotel for the night.

In the morning we grabbed donuts at Holy Donut and coffee and hot chocolate at Bard Coffee. Then we ventured south down the coast. Our first stop was the Kennebunks, two sister towns (Kennebunk and Kennebunkport) separated by an estuary. The charming and picturesque towns are full of shops, restaurants, and art galleries. We also strolled among the grounds of the Franciscan monastery.

We continued south to Ogunquit, another charming coastal town. We had lunch at the Crooked Pine and then strolled along Main Street, checking out the shops and galleries. We walked the Marginal Way, a path that winds along Ogunquit’s dramatic craggy shoreline. Then we ambled out to Ogunquit Beach, a beautiful sandy stretch along the Atlantic coast, and began the drive back to Portland. The shoreline along the Marginal Way

Returning to Portland, we had a fantastic dinner at Fore Street. Then we walked over to The Portland Hunt and Alpine Club for some excellent cocktails.

The next day we began our exploration of Down East Maine. We drove north, stopping first at Wolfe’s Neck Woods State Park and took a beautiful walk along the estuary’s rocky shores. We continued on to Freeport, where stopped for lunch and some excellent beer at the Maine Beer Company. We continued up the coast, stopping at two more lighthouses: Pemaquid Point Lighthouse, and Owls Head Lighthouse. 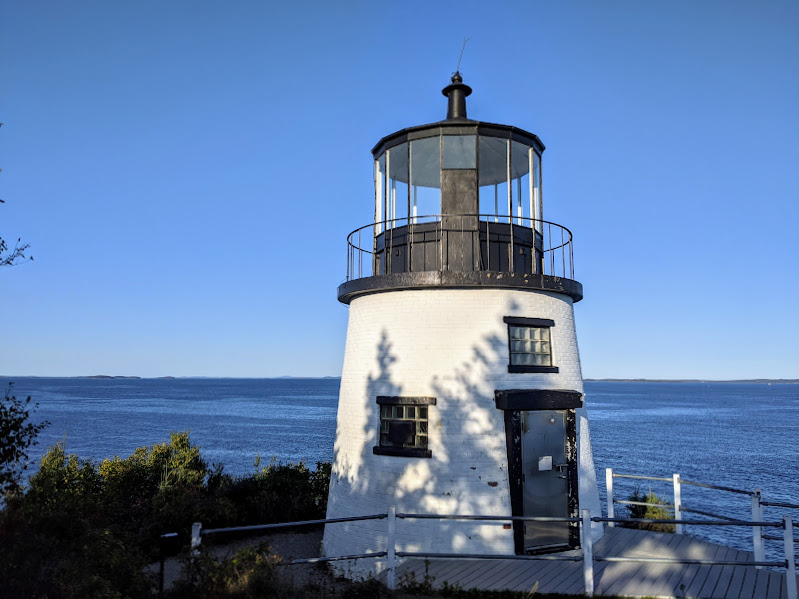 We reached the beautiful town of Camden in the early evening. We checked into our lodings, the marvelous Abigail’s Inn. Then we walked into charming downtown Camden and grabbed a drink at Blaze Brewing Company before eating a tasty dinner at The Waterfront Restaurant.

In the morning, we enjoyed a delicious breakfast at Abigail’s Inn, then drove a few minutes north of town to Camden Hills State Park. The park’s main attraction is 780-foot Mount Battie, which towers over Camden harbor. You can hike or drive to the top; we drove. Though the weather was cloudy, we still enjoyed a beautiful view of the town and the harbor. 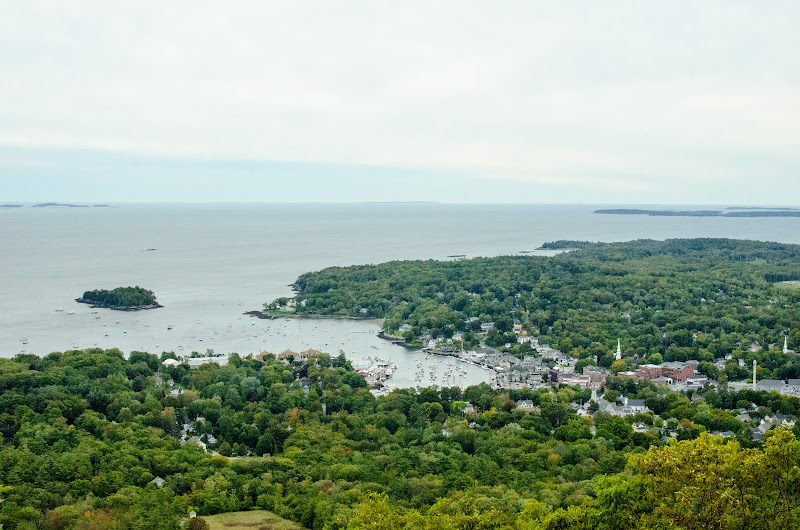 Returning to town, we met up with our friends Ben and Brianna. We grabbed an excellent lunch from the Thai restaurant Long Grain, which we took to Harbor Park to eat. Then we backtracked south of town to Rockland Breakwater Light. It’s an unusual lighthouse, in that it’s situated at the end of a 4,346-foot (about .8 miles) long breakwater. It’s a beautiful walk, but we did it at high tide, when there was a decent swell. So we all got soaked as waves crashed through the rocks of the breakwater. We had to turn around before we reached the lighthouse because the seas were so high, but we still had a great time. 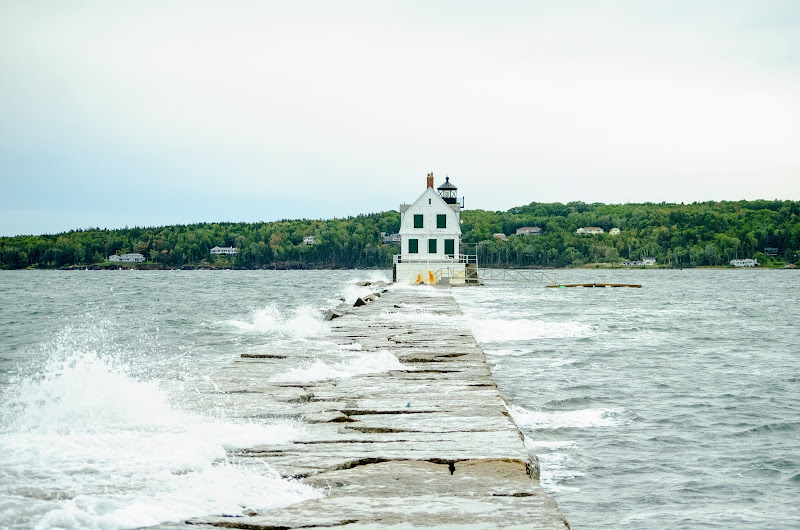 Continuing north along Maine’s coast, we drove to Fort Knox. During the early history of the United States, the area around Fort Knox—known as the Penobscot Narrows—was the site of several border disputes with Canada, and was considered an important strategic location. The U.S. military explored several options for building a fort on the site over the decades, but construction didn’t begin until 1844. Work continued until 1869, and by that time the British threat from Canada had receded. The fort never saw combat, though it was manned during the Civil War. Today it’s one of the best-preserved military fortifications on the East Coast. After touring the fort, we continued north to Taunton Bay, where we spent the night in a comfy cabin on the seacoast. 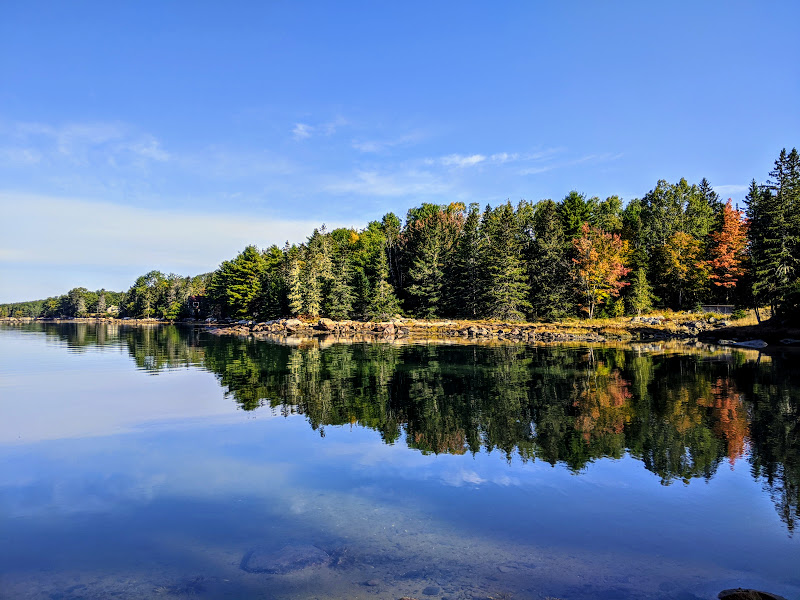 The next morning we drove out to Schoodic Point, part of the Schoodic Peninsula region of Acadia National Park. We took in the gorgeous views, then did a hike up to Schoodic Head, a scenic viewpoint that offers nice views of the surrounding area.

The next day we visited the main part of Acadia National Park, located on Mount Desert Island. We did an incredible hike along the Precipice Trail, which winds up a steep cliff, with ladders and chains secured to the rock to aid hikers. The top of the trail boasts amazing views of the surrounding area. Descending the trail, we continued along the park loop road. We stopped at Sandy Beach and Thunder Hole, two of Acadia’s most popular attractions. We also visited the picturesque Jordan Pond. Then we explored the quaint town of Bar Harbor, poking around the many shops, grabbing some awesome ice cream at Mount Desert Island Ice Cream, and enjoying some excellent cocktails at The Barnacle. We drove back to our cabin on Taunton Bay for the night.

In the morning we drove back to Bar Harbor. We ate lunch at Bar Harbor Beer Works and spent most of the rest of the day exploring the picturesque town. We had pre-dinner drinks on the sprawling lawn of the Ivy Manor Inn and ended our night with an excellent dinner at McKay’s Public House.

We began before dawn the next day, driving up Cadillac Mountain to watch the sunrise. Cadillac Mountain is 1,530 feet high and near the easternmost point of the United States, so the combination of elevation and longitude means you can be one of the first people in the country to see the sun rise. It gets crowded, though; we shared the summit with hundreds of people, and parking can be hard to find on busy summer days. 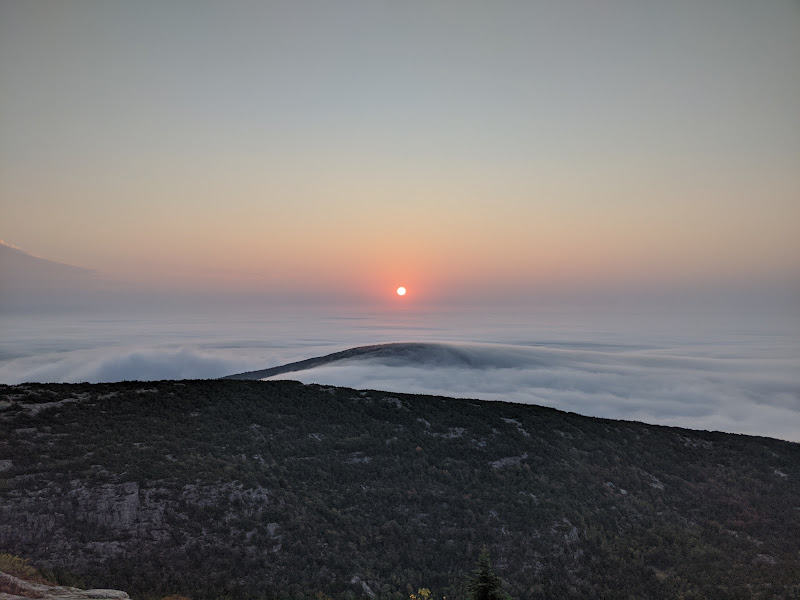 Returning to our lodgings at the Acadia Inn, we all napped for a couple hours. Then we walked into town and boarded a boat for a nature cruise along the east side of Mount Desert Island. We weren’t entirely sure what to expect, but it was remarkable. The tour began with views of Bar Harbor and its outskirts, where wealthy Americans have built spectacular vacation homes for many decades. We cruised by Sandy Beach and Egg Rock, a small rugged island topped by a lighthouse. But it was the wildlife that made our cruise truly incredible. We saw cormorants, seals, dolphins, bald eages, and much more. 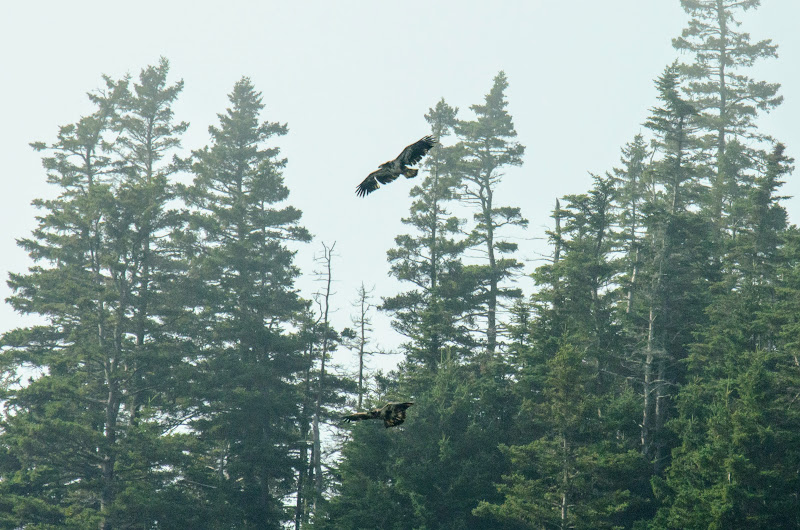 Back on the mainland, we got a drink at the Finback Alehouse. Then we drove across the island to the Bass Harbor Head Lighthouse, in our opinion Maine’s most beautiful. We returned to Bar Harbor for a great dinner at the Side Street Cafe. We spent the next day, our last day in Bar Harbor, exploring more of the shops and enjoying the town’s spectacular setting. After lunch we visited the Wild Gardens of Acadia, which simulates several of the park’s habitats from the coast and bogs to the mountain summits. For our last evening in town, we took a cruise on one of Bar Harbor’s windjammers (masted sailing vessels). Then we had our best meal of the trip, a fantastic dinner at Havana. 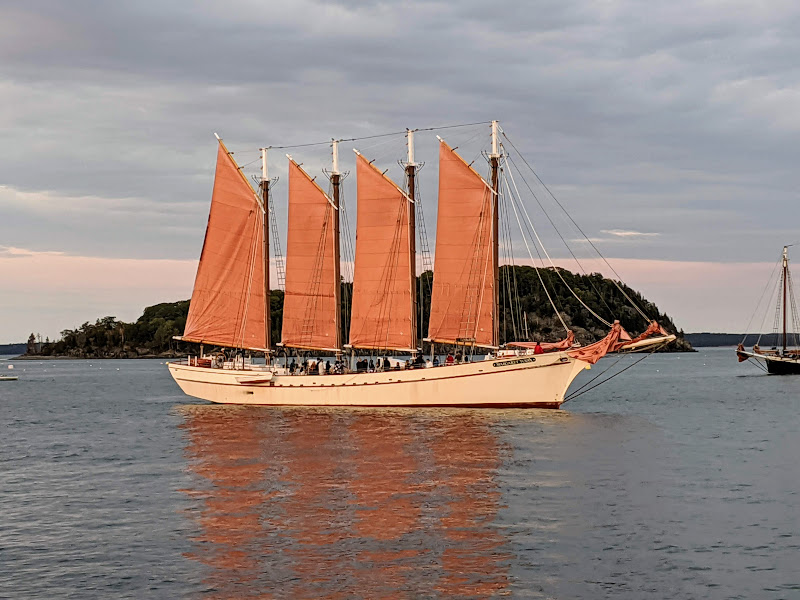 One of Bar Harbor's windjammers

We’d planned to return to California the next day, to spend a week in the mountains near Mammoth. But the state’s devastating wildfires had forced the area to close to visitors. At the last minute, we changed plans and decided to drive further up Maine’s coast. We pressed on all the way to West Quoddy Head where we spent the night in a converted Coast Guard station.

The next day we strolled out to West Quoddy Head Light, the easternmost point in the continental United States. Then we visited the town of Eastport, one of the northeastern most towns in the United States. A bridge connects Eastport to New Brunswick, Canada. But the border was closed due to the COVID-19 pandemic, so a large sign warned us not to get on the bridge. 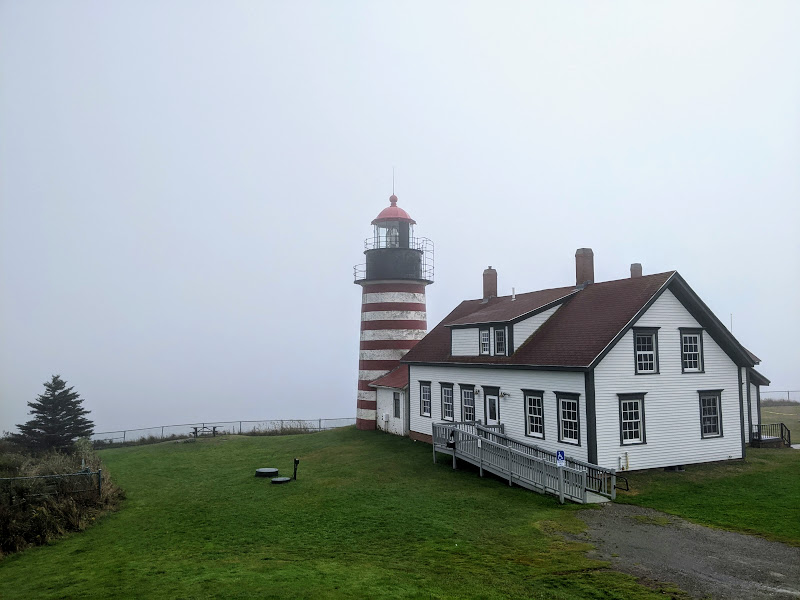 Our last day in Maine was mostly spent driving. We drove all the way back to Portland, stopping briefly in Bangor for lunch and beer tasting at Mason’s Brewing Company. Once we’d returned to Portland, we ambled along the Eastern Promenade, caught a beautiful sunset over the harbor, and ate a yummy dinner at Duck Fat. The next morning we woke very early to drive to the airport and fly home. 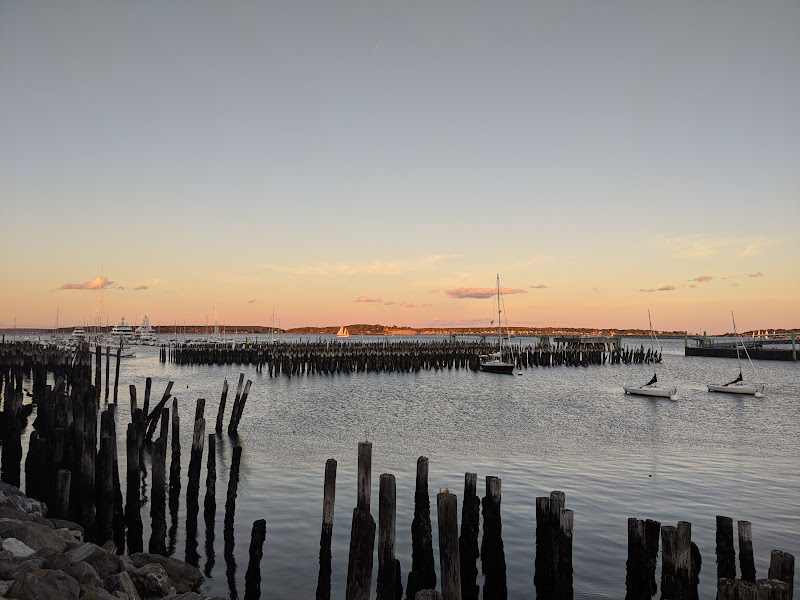