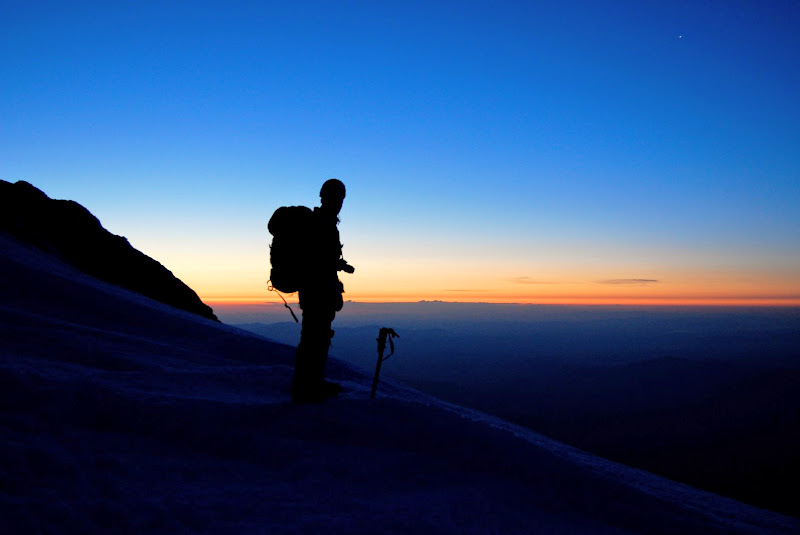 Fourteen thousand, one hundred, and sixty-two foot Mount Shasta is a dormant volcano that rises in solitary drama in the far north of California. A few years ago, I attempted the climb with my father. We were turned back by low snow, poor conditions, and severe dehydration. Over Memorial Day weekend I tried again with a group of friends from school. 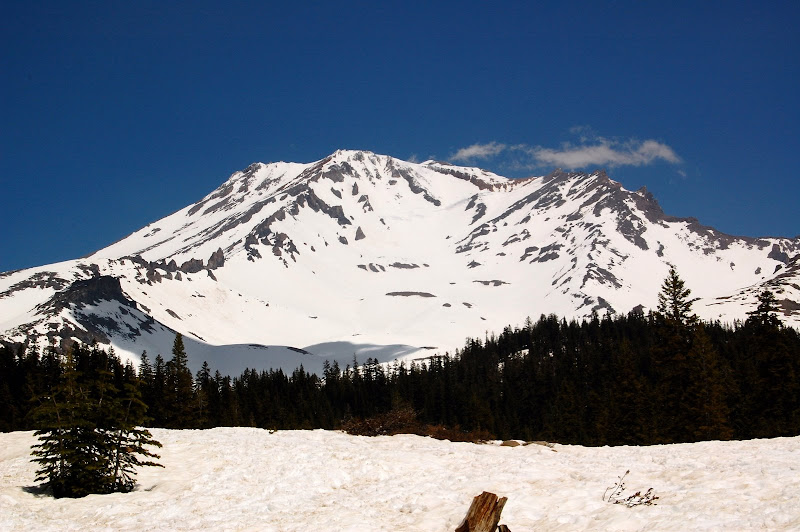 We drove to Mount Shasta on Friday afternoon. That night, we camped at Bunny Flat, the trailhead for the popular Avalanche Gulch route at 6950′. Unusually for May, Bunny Flat was still covered in snow. That was a good sign—everything we’d seen and heard suggested that climbing conditions were significantly better than the last time I’d attempted the peak. We pitched a tent on a flat snow patch south of the road, and some of us slept outside on an exposed dirt patch beneath the stars.

The next morning, we returned to town to rent gear and get wilderness permits. After that, we drove back to Bunny Flat. From Bunny Flat, the trail winds north east to Horse Camp, where there is running water and an outhouse. We made camp in the early afternoon and relaxed for a few hours. Around 4:30, a small thunderstorm blew through, but it was short and didn’t drop much precipitation. When the rain stopped, we cooked a dinner of pesto pasta and then went to bed. 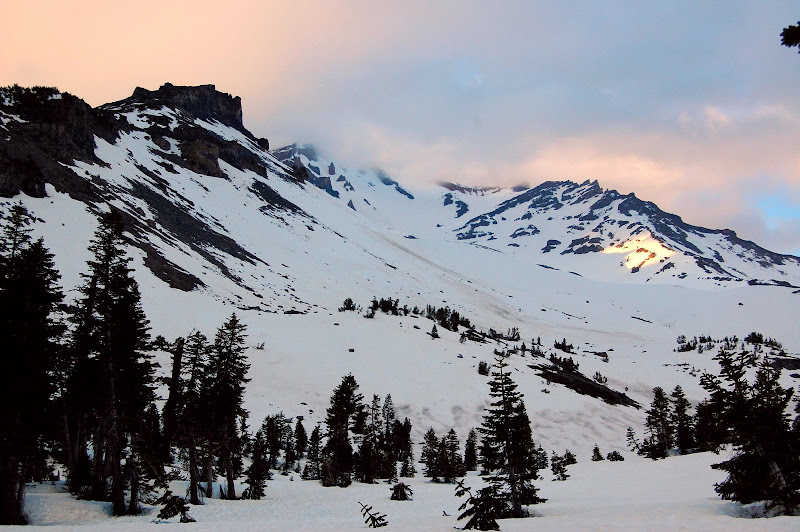 On Sunday we woke up and broke camp. Before we left, Matt and I taught an ice axe workshop, covering the safe handling of an axe while hiking and the basics of self arrest. Then we started hiking towards Helen Lake, an elevation gain of 2,500 feet over about two miles. We moved slowly up the steep, slushy snow, reaching Helen Lake around 3:30. At Helen Lake, we cooked a dinner of beans and rice. Then we prepared our summit packs, and we were in bed by 6:30 PM. 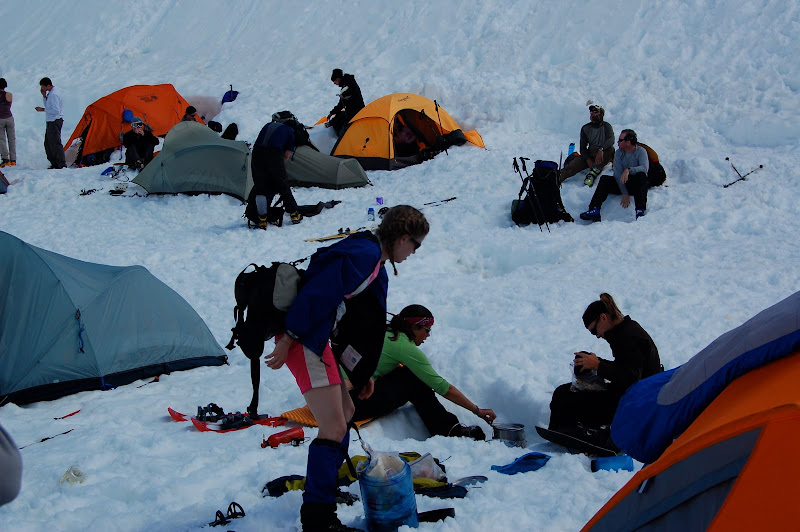 Our camp at Helen Lake

At one o’clock in the morning, we woke up. We prepared quickly for our summit attempt, finally donning our crampons. The snowpack was hard, giving us excellent purchase. We were the second group to depart from Helen Lake, but the group ahead of us got lost fairly quickly. Eight of us left camp that morning, but two turned back after gaining about six hundred vertical feet. The remaining six of us continued ascending Avalanche Gulch at a fast clip.

We reached the bottom of the Red Banks, a long, steep cliff of reddish rocks at about 12,400′, by three thirty. Rather than skirt the banks and hike up under Thumb Rock, we climbed a steep, narrow couloir between the cliffs. The sun was still not up, so it was freezing cold as we gained the ridge and lost our protection from the wind. 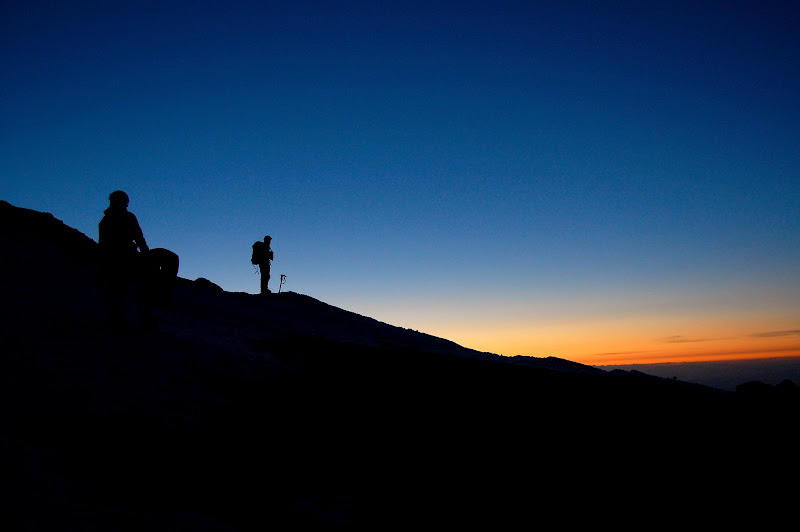 The next obstacle in our path was Misery Hill, Shasta’s infamous false summit. The sun began to rise as we ascended Misery Hill, casting Shasta’s spectacular silhouette in the hazy sky to the west. We finally topped Misery Hill and reached the summit plateau. As we crossed the plateau, Cara and I noticed the foul stench of sulfur. We spotted some steaming volcanic vents below the trail, reminding us of Shasta’s dormant status. From there, it was a short hike up the final approach to the summit. Shortly before six thirty we were standing on top. 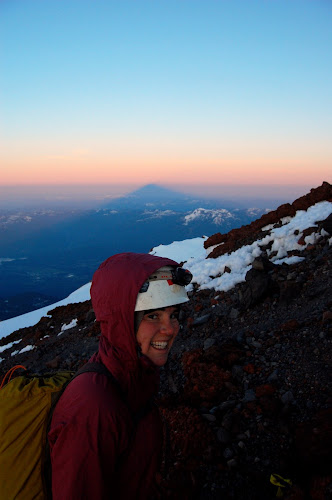 When we reached the summit, there was only one other climber there. He left a few minutes later, giving us the summit to ourselves. We high-fived, took pictures, and forced down a few energy bars. Even though the sun was up, the wind was blowing, and it was still bitter cold. After about twenty-five minutes, we began our descent. 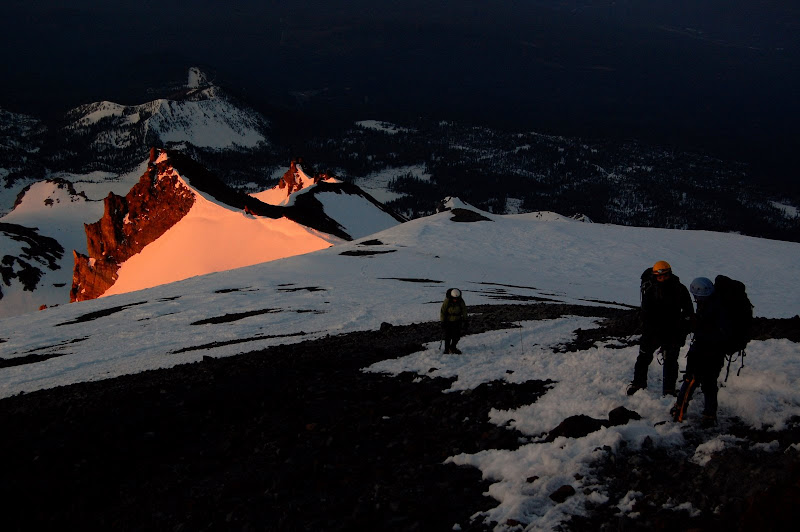 We walked with crampons back down to the plateau, and then the top third of Misery Hill. We had moved much more quickly than I had anticipated, so we were descending much earlier in the day that I had expected. As a result, the snowpack was still very hard. This made glissading very difficult, and, at times, quite painful. We did some glissading above the Red Banks, but then put crampons back on to descend the slot between the cliffs. 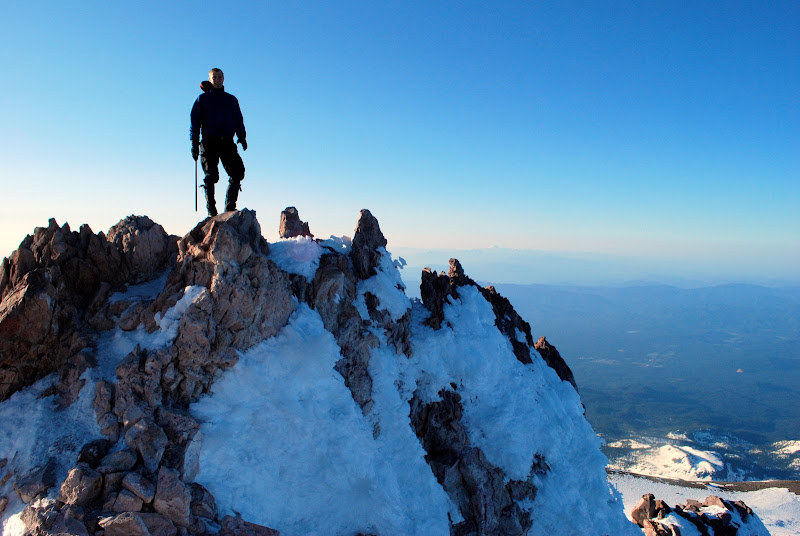 Even below the Red Banks the snowpack was hard enough to make glissading a painful ordeal. We alternated hiking and glissading and made it back to camp around ten o’clock. Back at camp we struck our tents and ate a quick lunch. Then all ten of us began our final descent. By this time, the sun had softened the snow enough that glissading was both easy and fun. We were able to glissade almost the entire way back to Horse Camp. From there, it was a short hike back to our cars. We ate a quick lunch in the town of Mount Shasta, and then piled into our cars for the long drive home.