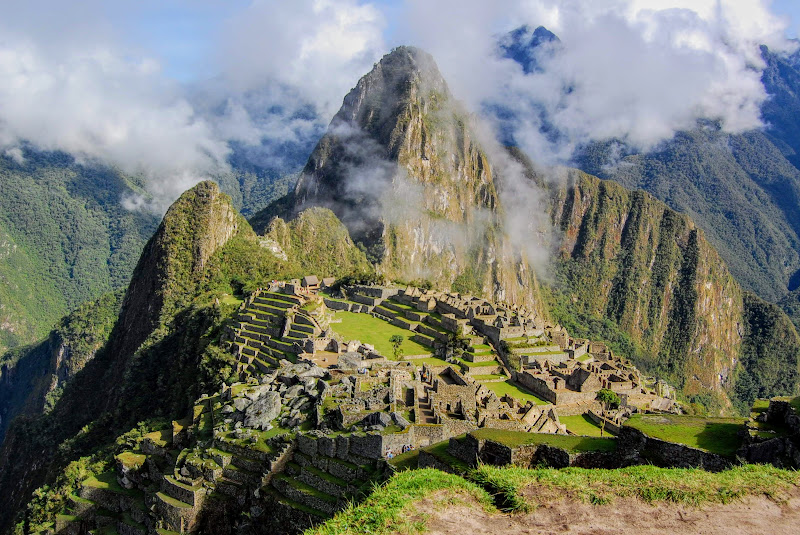 I flew into Lima in the early hours of December 14. A desert city on the Peru’s western coast, Lima is known for its depressing weather, and sure enough, it greeted us with oppressive clouds and fog. A taxi took Kate and me to a hostel in Lima’s Miraflores district. I didn’t really know what to expect, having never been to South America, but Miraflores was unlike anything I would have anticipated. Within a five-minute walk of our hostel were a TGI Friday’s, a Chili’s, a McDonald’s, a Starbucks, and a Domino’s Pizza. We spent the our first day struggling against jet lag while exploring the area around our hostel. We ate dinner at a nice Italian restaurant a few blocks from the hostel—apparently Italian food is a hot trend in Peru.

The next day we were joined by Kate’s friend Divya and her boyfriend Daniel. Daniel, a native Colombian, spoke fluent Spanish and proved to be invaluable in helping us travel throughout Peru. The four of us walked around Miraflores, and we ate lunch at an upscale Peruvian restaurant where Kate and Divya tried ceviche, a quintessential Peruvian dish. We strolled west to the cliffs above the beach, where we were heckled by paragliding companies. Then we walked down to the beach, where we were heckled by several people offering surfing lessons. Declining, we gravitated towards Larco Mar, a new mall built into the cliffs above the Miraflores beach that wouldn’t look out of place in San Diego. It was a surreal experience to stand in an Aeropostale store in Peru, with pop remixes of Christmas carols (in English) playing outside on the mall’s sound system and The Killers blasting on the store’s speakers.

The next day, we took a bus tour of downtown Lima. We saw several of the city’s main squares and buildings. We visited an old church where human remains hundreds of years old were on display in the crypts. The tour was worthwhile, but Lima is really not a tourist city. We ate lunch in downtown Lima and then took a cab back to Miraflores.

Early on our third morning in Peru, we returned to the airport for a flight to Cusco. At 10,800 feet above sea level, Cusco was the historical capital of the Inca Empire. Today it is a sprawling city of about 350,000 people. Cusco is a jarring mix of developing world poverty and wealthy tourist districts. The ride from the airport passes through some of Cusco’s slums, where makeshift houses line dirt- and garbage-covered streets. The town’s center, however, is reminiscent of a European square, with two beautiful churches bracketing a wide cobbled plaza. We stayed in a very nice hotel in the San Blas district, just off of the Plaza de Armas. 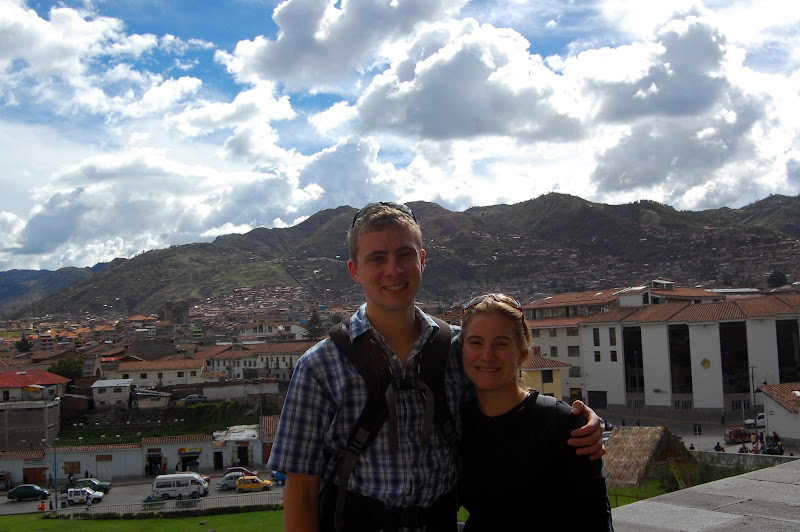 Kate and me at the Church of Santo Domingo

After checking in and relaxing for a few hours, we took a fairly standard tour of the ruins around Cusco. We began at the Church of Santo Domingo, which was built on top of an Inca temple of the sun, Coricancha. An earthquake in 1950 destroyed most of the church, but the Inca temple remained intact. The church was rebuilt around the astounding Inca architecture, so that visitors today can see the walls of Coricancha around the main cloister. 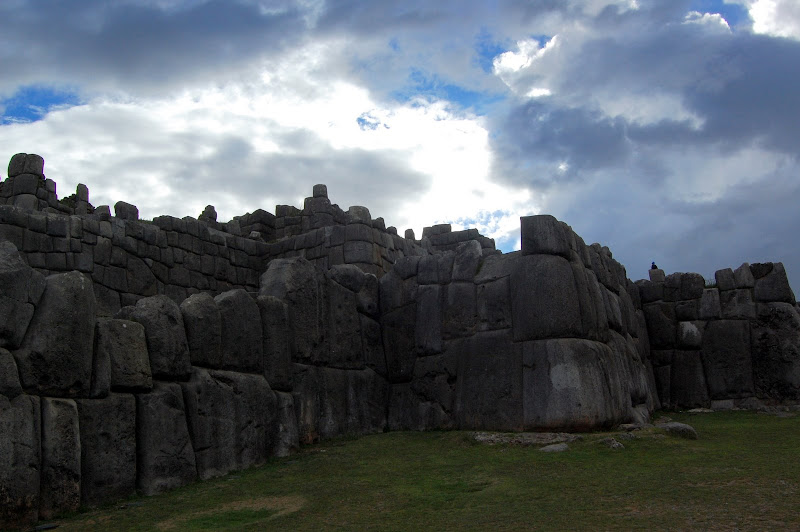 A bus then took us to the ruins in the mountains above the city. We first visited Saqsaywaman, a massive astronomical and religious site with beautiful multilevel walls and paths. We also visited Q’engo, Pukapukara, and Tambomachay, more Inca sites with spectacular views of the scenery around Cusco. Unfortunately, our tour guide was terrible and difficult to understand, but since the Inca had no written language very little is known about these sites. We returned to Cusco and ate a delicious dinner on the balcony of a restaurant overlooking the Plaza de Armas. 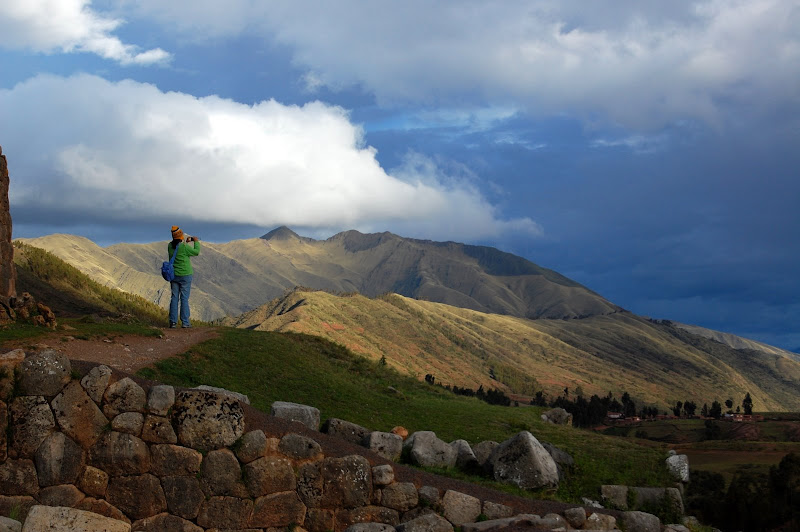 Exhausted from the day, we collapsed into the comfortable beds at our hotel. We slept late the next morning, and then paid a taxi driver 100 soles (about 30 dollars) to take us to the nearby town of Pisaq, another Andean Inca city and the site of more spectacular ruins. The ruins are spread out along a mountain that rises some 1,500 feet above Pisaq. Our driver took us to the top of the ruins and told us to meet him in the covered market once we reached Pisaq.

The hike down through the ruins was incredible. Terraced agriculture and stone cities built into the mountainside appeared around every turn. Since the entire hike was downhill, it was not very strenuous. Most tourists do the hike in the morning, and since we were there in the afternoon we had the site mostly to ourselves. We took our time exploring the beautiful ruins that overlooked Pisaq and the sacred valley, returning to Pisaq just in time to catch the end of the covered market that is held every Thursday and Sunday. We met our driver, who joined us for a dinner at a small restaurant off the main square that offered empanadas for 2 soles (about sixty cents) apiece. 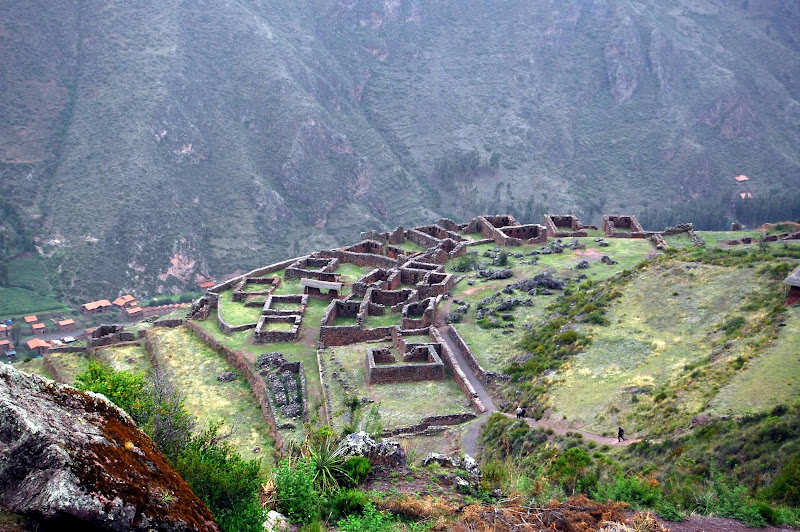 We awoke at 4:30 the next morning to finish our preparations to leave on the Inca Trail. At 5:30, our guides met us at the hotel and helped us load our packs into a bus. We dozed most of the way to Ollantaytambo, the last big town before Machu Picchu. After eating a snack and buying some trekking poles at Ollantaytambo, we returned to the bus for the ride to Kilometer 82, where the Inca Trail begins.

There were sixteen American, European, and Australian tourists, two guides, and twenty-two porters for our trip. We were expected to carry only our clothes, snacks, water, sleeping bag, and sleeping pad (several of the clients also hired an additional porter who carried most of that). Every morning, the cook made us a delicious breakfast. Then we would leave camp. The porters broke down our camp, passed us on the trail, and set up a kitchen and mess tent at a predetermined lunch spot. We would eat lunch, and then leave. Once again, the porters would break down the tents and clean up, pass us on the trail, and have camp set up by the time we arrived in the early evening. 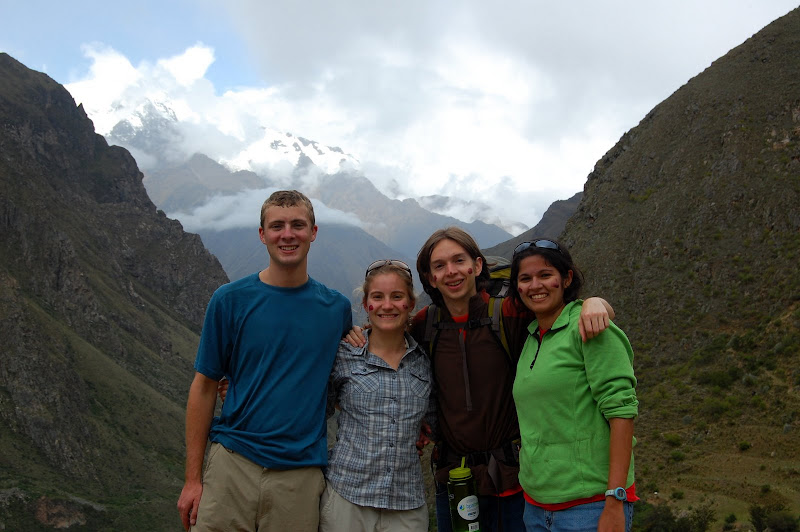 Me, Kate, Daniel, and Divya on the Inca Trail

The first day of the trek was a fairly mellow hike, mostly uphill, for about 10 kilometers. The day was beautiful; it rained a little bit in the afternoon, but the sun was out most of the time and it was always pleasantly warm. The trail wound along the Rio Urubamba for the first few miles, and then turned upward into the Andes. Along the way, we got glimpses of distant snow-capped peaks. We paused where the train crossed the Rio Cusichca, sitting on cliffs overlooking Patallacta, an Inca town used for farming, religious ceremonies, and housing soldiers. After Patallacta, the trail followed the Cusichca up into the mountains to the small town of Wayllabamba at 9,800 feet, where we camped for the night.

The next day dawned cloudy an rainy, with visibility a few hundred feet. The hike was a long slog up a relentless hill to Warmiwanusca (Dead Woman’s Pass) at 13,800 feet. It rained nonstop, sometimes in heavy torrents. As I crested the pass, the rain let up a little bit, and the clouds thinned enough that the sun’s disc could barely be seen. Slowly, the rain stopped and the clouds began to disperse. Though the day was strenuous, it was fairly short and we reached our camp in the early afternoon. The weather continued to clear, and by the evening we had a spectacular view of the Andes in every direction. 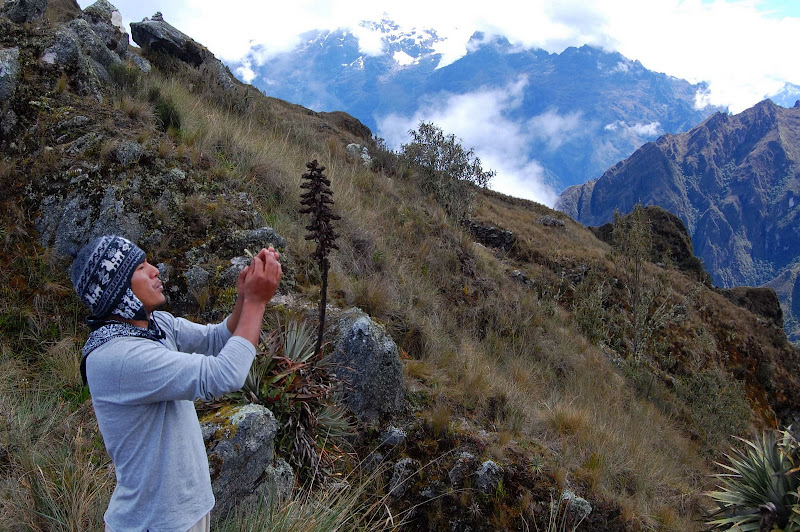 The next morning began with another long climb, up to the ruins of Runkurakay, a rest stop for messengers on the Inca trail. Runkurakay is a semicircular ruin set high on a steep mountainside with astounding views of the Inca Trail and surrounding mountains. The trail continued to climb above the ruins to a second pass at 12,960 feet. At the second pass we paused for a rest and said a Quechua prayer for good weather the next day, when we would reach Machu Picchu. From there, the trail wound down past Sayaqmarka, a large ruin perched dramatically on a sheer cliff that served as a signaling station and astronomical site. We ate lunch a little ways past Sayaqmarka.

After lunch, the trail wound gently upward along a ridge that afforded the most breathtaking views of Andean peaks of the entire journey. We topped a third pass at just under 12,000, the site of another amazing ruin, and then began a long, steep descent down the “Gringo Killers”, a series of 1,500 steps down to Wiñay Wayna. Wiñay Wayna is a large set of terraces, used for growing food at altitude. From there it was a short, easy descent to the campsite. 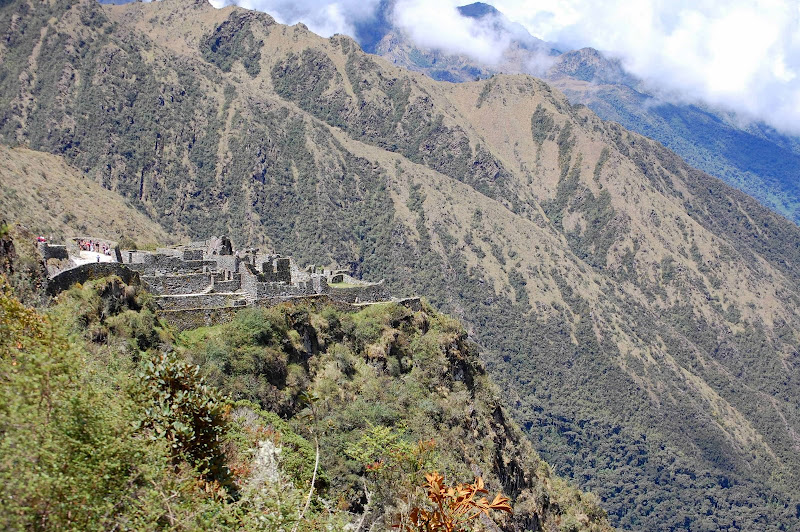 We ate a delicious dinner and tipped the porters before retiring for the night. We finally got to our tents at about midnight. Kate and I spent four sleepless hours dealing with nosebleeds, spills, torrential rain, and illness. At four in the morning, our guides woke us up for breakfast and the beginning of our final day on the trail. Thankfully, the rain had stopped, but the weather was still very foggy. We were on the trail shortly after 5am, and we reached Intipunku (the Sun Gate) by 6:30. The thick fog obscured Machu Picchu, but as we watched it slowly cleared, giving us a spectacular view of Machu Picchu. 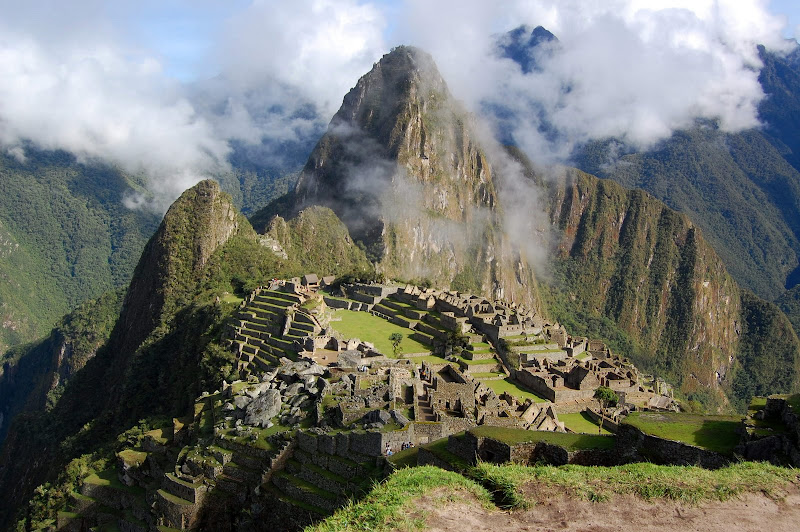 From Intipunku, the descent to Machu Picchu was relatively quick. We snapped some photos, and then entered the sanctuary to take a short tour with our guide. After the tour, we climbed Huayna Picchu, the 8,922 foot peak that stands behind the city of Machu Picchu. The hike was short but fairly strenuous, with lots of stairs and some exposed traverses. The view from the top was incredible. Then we returned to Machu Picchu and took a bus down to Aguas Calientes, where we reunited with the tour group for lunch. We took a train and a bus back to Cusco. Early the next morning we flew back to Lima. Kate and I spent the day relaxing and walking around Lima. That night we took a red-eye back to the U.S., marking the end of a truly amazing trip.