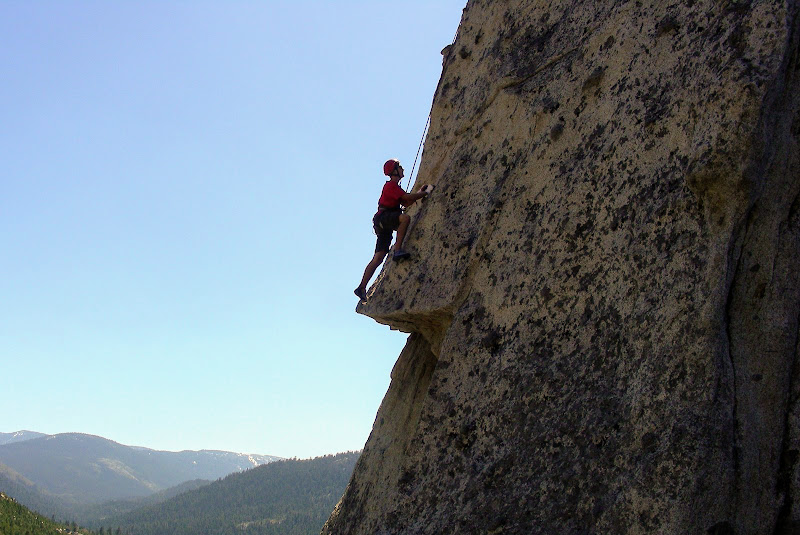 As a full-time student, most of my climbing these days is done in gyms. So I was excited for an opportunity to spend a weekend climbing on real rock at Phantom Spires, an area south of Lake Tahoe off of Highway 50 with excellent climbing on granite spires. Phantom spires is a neat place to climb because it has routes of varying difficulties, opportunities for trad leading, sport climbing, and top-roping, and it’s a beautiful area but only a ten minute walk from the parking lot.

We exited Highway 50 at the Wright’s Lake turnoff, and followed a narrow two-lane road as it wound its way up into the mountains. Then we took an unmarked left turn onto a rocky, unpaved road that gave our Jeep Commander no trouble but certainly disconcerted the passengers in Dodge minivan. The night was warm, so we didn’t pitch any tents. We spent a beautiful night sleeping under a very dark sky full of intensely bright stars. Saturday dawned bright and sunny. We had a breakfast of bagels and then our leaders, Matt and Joe, started hiking to the spires to set top ropes while we prepared the gear and lunch food we’d need during the day. With that done, we joined Matt and Joe at Middle Spire and began climbing. Caitlin and Kat set up to belay

The first two ropes Matt and Joe had set up granted access to routes varying in difficulty from 5.6 to 5.9. I started the day with an ascent of a 5.8 crack climb, largely because my limited experience outdoors hadn’t included any crack climbing at all. Though my poor technique meant my hands were torn up by the crack jams, it was exhilarating to reach the top. For the next hour or so, we experimented with different climbs on those two ropes, and many members of the group were able to overcome their initial fears of the sport.

Next, Matt and Joe set up a top rope on a 5.7 route that included a fun overhang. Though the overhang required a long stretch with the toe or a heel hook, the hand holds were good enough to make the move relatively easy. I approached the overhang from a 5.9 lieback and then continued to the top. Me on the overhang

It was at about this time that our third instructor, Chris, showed up. She had been in the Tahoe area for a few days, but had been without a climbing partner. So she had decided to free solo (no ropes or protective equipment at all) Bear’s Reach, a 5.7 route up a 400-foot wall. Matt and Joe—both excellent climbers—thought that Chris was insane to attempt such a dangerous climb. They then informed us that Chris would be teaching the risk management segment of our wilderness course during the next class.

We took a break for lunch and hunkered down out of the wind on a flat rock below the spire. After we ate, Joe and Cris led a route all the way to the top of the spire—during the first part of the day we had been climbing shorter routes that only reached about halfway to the top. Chris and Joe set a top rope on a route that began with a 5.9 called Slow dancer and finished with a short 5.10a climb called The Prow over a protruding slab at the top of the spire. Looking up at The Prow

I was the first person in our group to attempt it, which meant that I didn’t know the route or moves required to reach the top. I tried several times to make a tricky traverse onto the face. Once I finally managed it, I cruised up the 5.9 face climb to a small ledge below the start of the 5.10 rock. Unfortunately, my rope had gotten stuck on a flake of rock above the main face. The upshot of this fact was that if I tried to climb any higher, my own rope would pull me off the rock. I lay on the ledge and called for Adrian, who was belaying me, to feed out slack. I tried desperately to flip the rope over the flake, but the high winds and shape of the rock thwarted my efforts. Eventually I had to downclimb about ten feet, let the rope take my weight, and jump and swing off the rock until the rope was free. After that, I returned to the ledge and finished the climb. At the end of the day, our instructors set up a new top rope on a 5.10c route called Candy Land. A maze of large chicken heads (knobs protruding from the face of the rock) with a crack at the top, Candy Land was one of those climbs that is harder than it looks because the difficult moves are hard to see. Matt, Joe, Cris, and Adrian all climbed it while I climbed Slow Dancer and 5.10a above it again, this time with no trouble. Completely exhausted with a split finger on my left hand, I walked around the spire to see how things were going on Candy Land.

Adrian had just finished his successful attempt at climbing the route. Joe, who had belayed him, looked at me and asked if I wanted to try it.

I slowly began putting on my climbing shoes and tying into the rope. The first part of the climb was easy, but then I fell trying a tricky move to place my right foot on a large chicken head. After several minutes of struggling with the move, I gave a massive tug and pulled myself up. The next part was easier, and then I reached another tricky move when the chicken heads on the face ended and I had to start using holds in the crack at the top of the route. After another fall, I made it to the top. Exhausted but happy, I relaxed as Joe lowered me to the ground.

We returned to camp and cooked a delicious dinner of chili, French bread, and quesadillas. Since we were camping at our cars, our food options had been significantly expanded. In fact, the next morning we had scrambled eggs for breakfast before setting out to a smaller rock to do some more climbing. The morning was spent climbing two tricky 5.8 slabs and an extremely strenuous 5.9 crack. I couldn’t manage to climb the crack, and so I took a different route to the face climb above it.

After lunch we practiced rappelling and worked on climbing a fun but easy unnamed 5.7 route back to the top of the rappel. The climb started with a difficult move that essentially involved a pull up on a slanting protrusion followed quickly by either a hand jam in a nearby crack or another pull up on a chicken head directly above. After that, the climb was smooth sailing over chicken heads, pockets, and grips in the crack. When some of us were done with the climb, Joe taught a workshop on setting anchors. He used the anchors that had been set for the rappel and top rope to demonstrate the different aspects of assessing the safety of an anchor. Once everyone had finished the climb, we dismantled the anchors, sorted our remaining gear, and returned to the cars for the drive home.

Previous Round Top
Next Emigrant Wilderness