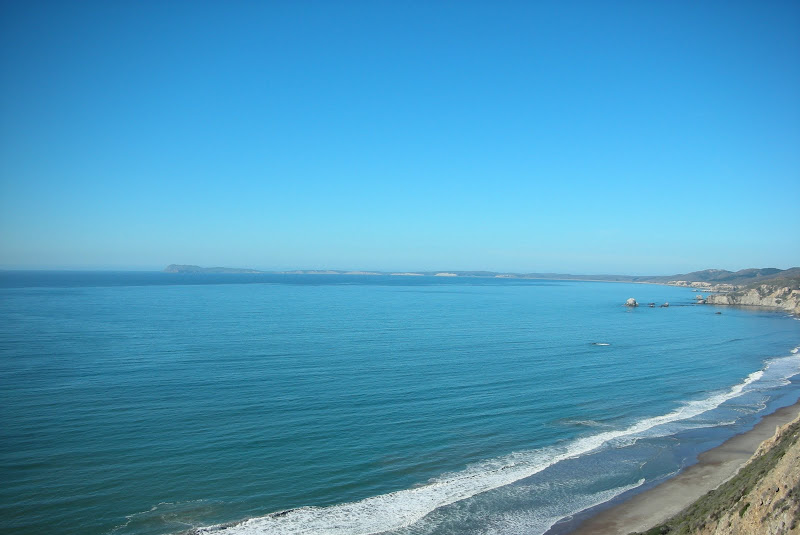 During our week off from school for Thanksgiving, my friend Paul and I decided to do a short backpacking trip along California’s Point Reyes National Seashore. We left early on Monday morning, piling ourselves and our gear into Paul’s 1978 Volkswagen bus. The morning was cloudy and gray, with dreary rain tumbling from the overcast sky. We drove for a little over two hours, picked up a permit, and parked at the trailhead. 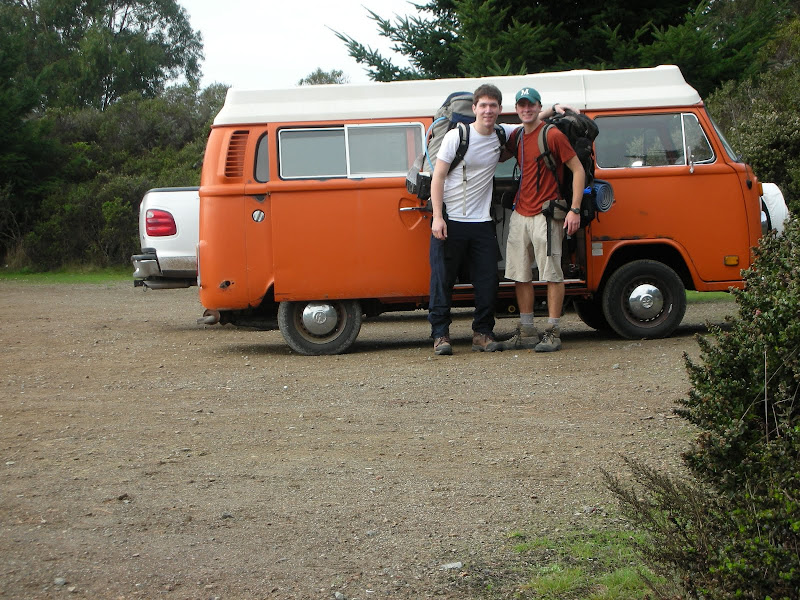 Paul and me at the trailhead

Just as we were ready to get underway, the rain stopped. The sky still cloudy, we set off along a trail through the coastal forest. The sky slowly started to clear, though it was still mostly gray as we hiked along the edge of a bluff high above the sea. The top of Alamere Falls

A few miles from the trail head, we took a turnoff that led west towards the ocean. After hiking for half a mile, we reached a small but beautiful waterfall that tumbled down a short cliff into a pool. This was the upper segment of Alamere Falls, a series of waterfalls that gradually fell all the way to the beach. We followed an unmarked trail around to the north. It led us down to the sand, where we could see the final part of the falls spray and foam as it crashed onto the beach. We ate lunch back up above the falls’ final segment. Then we returned to the main trail and hiked another few miles to Wildcat Camp, our home for the night. Situated on a broad bluff above the beach, Wildcat Camp is a beautiful spot to spend a night.

After setting up our tent, we took a three mile walk that alternately followed the cliffs above the beach and ducked into the forest. In a little less than an hour, we reached Arch Rock, a spit of rock that stuck out across the beack into the sea. Paul and I rested on the rock, looking out at the spectacular view of the pacific ocean. But for a few wispy clouds on the western horizon, the sky had cleared, and we were treated to an amazing view of Drakes Bay and Point Reyes. Me on the hike to Arch Rock

What troubled us was that, though the outcrop was called Arch Rock, there was no arch to be seen anywhere. However, I had noticed a small, unused trail that snaked down the side of the rock. We followed it down to the beach, and discovered that a creek flowed parallel to the rock until it reached the beach. At that point the creek turned abruptly and cut a channel through an arch in the rock. For several minutes, we explored the beach around Arch Rock. Then we climbed the bluff and returned to the trail.

Since we were only out for one night, Paul and I decided to splurge on our meal. We had a salad, delicious gnocchi for the main course, and a no-bake cheesecake for dessert. It was late November, so the sun set at around 5:45. We went to bed at around 8 under a starry moonlit sky. Paul and I awoke at 9:30 the next morning. We ate a leisurely breakfast and took our time breaking camp. We hit the trail at 11. The day had dawned even clearer than the one before. There was not a cloud in the sky, and the sunlight turned the ocean a deep blue color. We made it back to the parking lot in a few hours and then began the drive home. It was an awesome experience to sneak a beautiful two-day trip into the early California winter.