Landing late at night at Lisbon’s Humberto Delgado Airport, we caught an Uber to our lodgings, a charming apartment in Lisbon’s Baixa neighborhood. Despite the jet lag, it was late enough that we had no trouble sleeping. In the morning, we strolled over to Padaria do Barrio, a tasty bakery. Then we ascended a series of hills, stairs, and elevators to Castelo de Sao Jorge. The hill on which the castle stands shows signs of human occupation dating to at least the 8th century BCE and has been the site of Phoenecian, Carthaginian, Roman, and Moorish fortifications. In 1147, the castle and the city of Lisbon—then held by the Moors—fell to Portugal’s first king, Alfonso I, during the Siege of Lisbon. Today, the castle is an interesting historic site hosting a small museum, but the real highlights are the incredible views of the city. 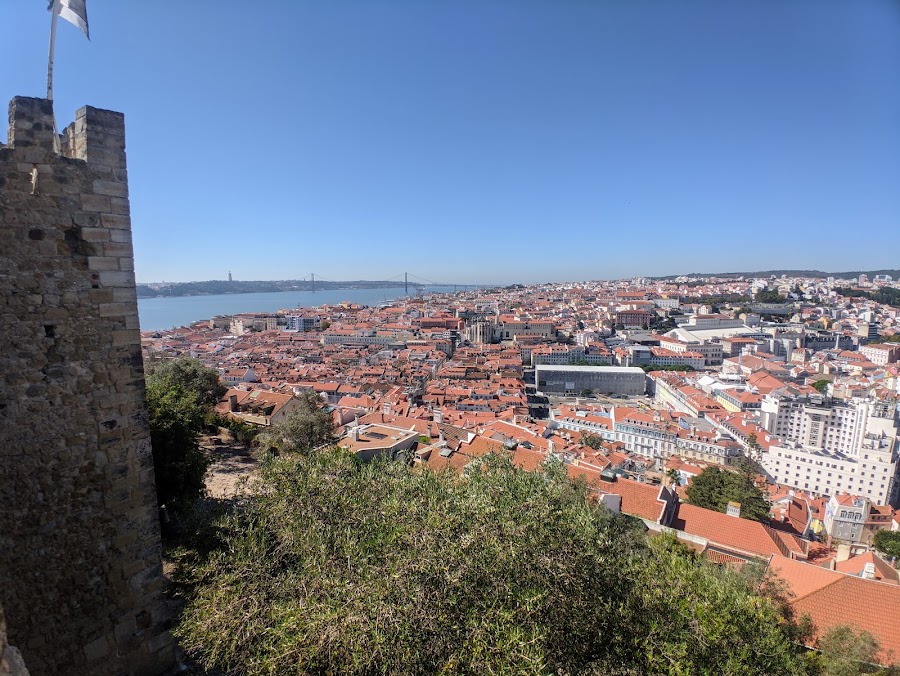 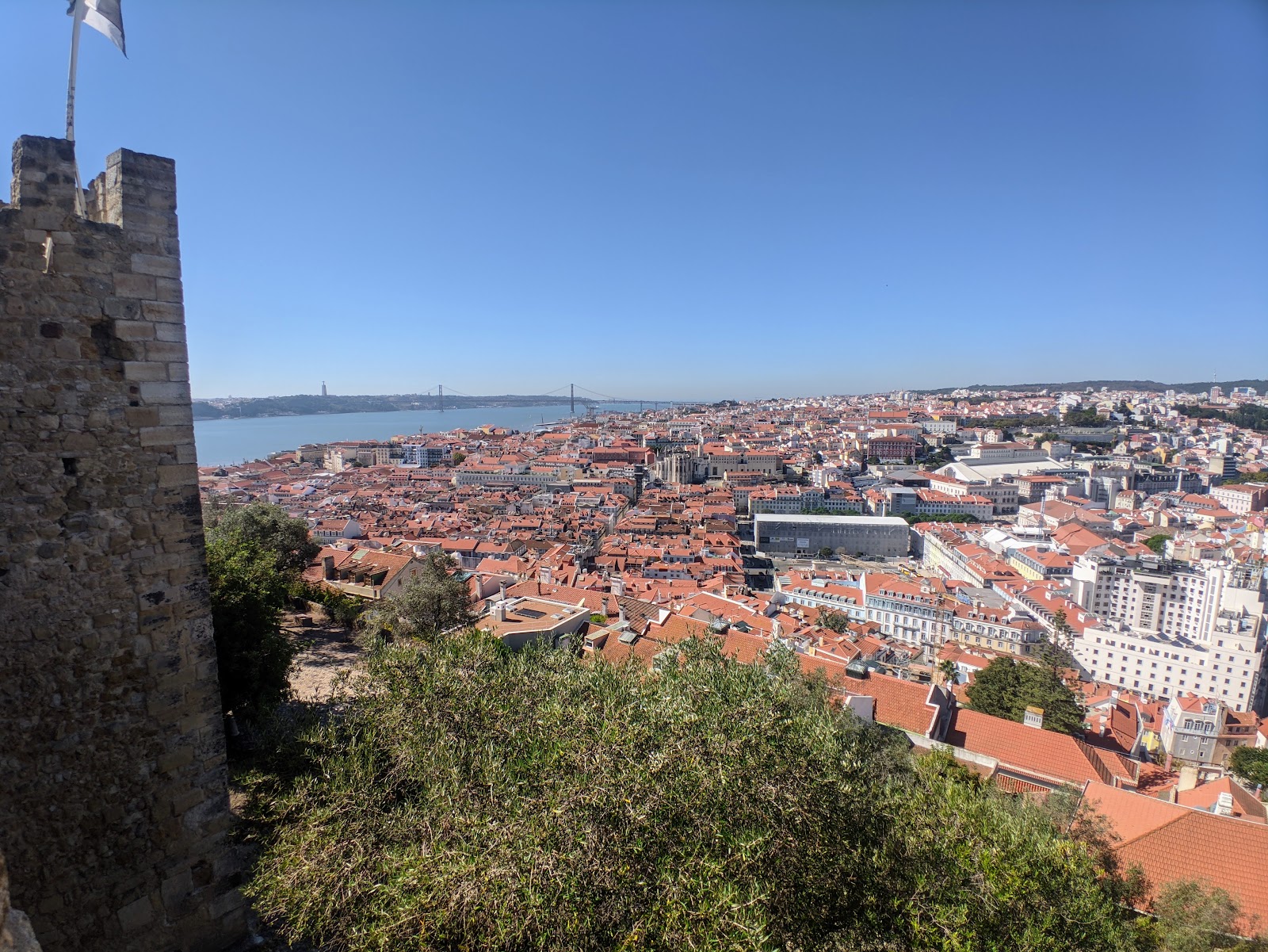 Leaving the castle, we strolled over to Igreja de Santa Luzia, a small but beautiful church with more excellent views of Lisbon. We stopped for a snack on a nearby terrace overlooking the city, and then we visited the Museum of Portuguese Decorative Arts, more enjoyable as a view into an aristocratic manor than for the contents of the museum.

We ambled through the Alfama neighborhood, down the winding stone streets, to Praça do Comércio, a massive waterside plaza flanked by restaurants and bars and backing onto the triumphal Rua Augusta Arch. Continuing our tour into Baixa, we stopped by the Lisbon Cathedral, Church of St. Nicholas, and Largo de Sao Domingos. The last has a notorious history as the site of a massacre of thousands of Jews in 1506 and of Lisbon’s slave market. We tried ginjinha, a traditional Portuguese liqueur made from sour cherries, at A Ginjinha, the oldest ginjinha spot in town. We didn’t like the drink that much, but it was to try. Then we grabbed a happy hour beer at The Queen Ale, a beer bar with a surprisingly great selection and excellent happy hour (there’s not much to be said for Portugal’s craft beer scene).

In the evening, we took an Uber out to Petisco Saloio, a traditional Portuguese restaurant. We had a tasty meal of octopus, suckling pig, and more in the restaurant’s tiny parklet.

In the morning, we took a tram out to Belém, an historic neighborhood in western lisbon. Our first stop was the Museu Nacional de Arqueologia, the massive archaeological museum containing artifacts dating to Portuguese prehistory. Then we went next door to the impressive Jerónimos Monastery, built by Manuel I to celebrate the feats of exploration that made Portugal rich and ushered in its golden age. The monastery is famous for its Gothic and Manueline architecture, its beautiful cloisters, and as the site of Vasco da Gama’s tomb. 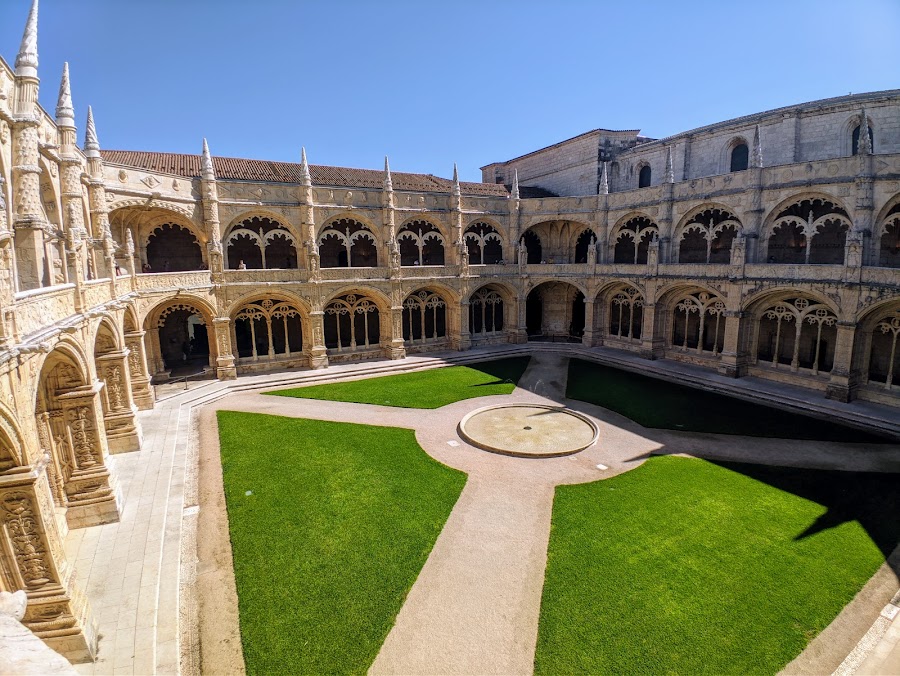 The cloister of Jerónimos Monastery 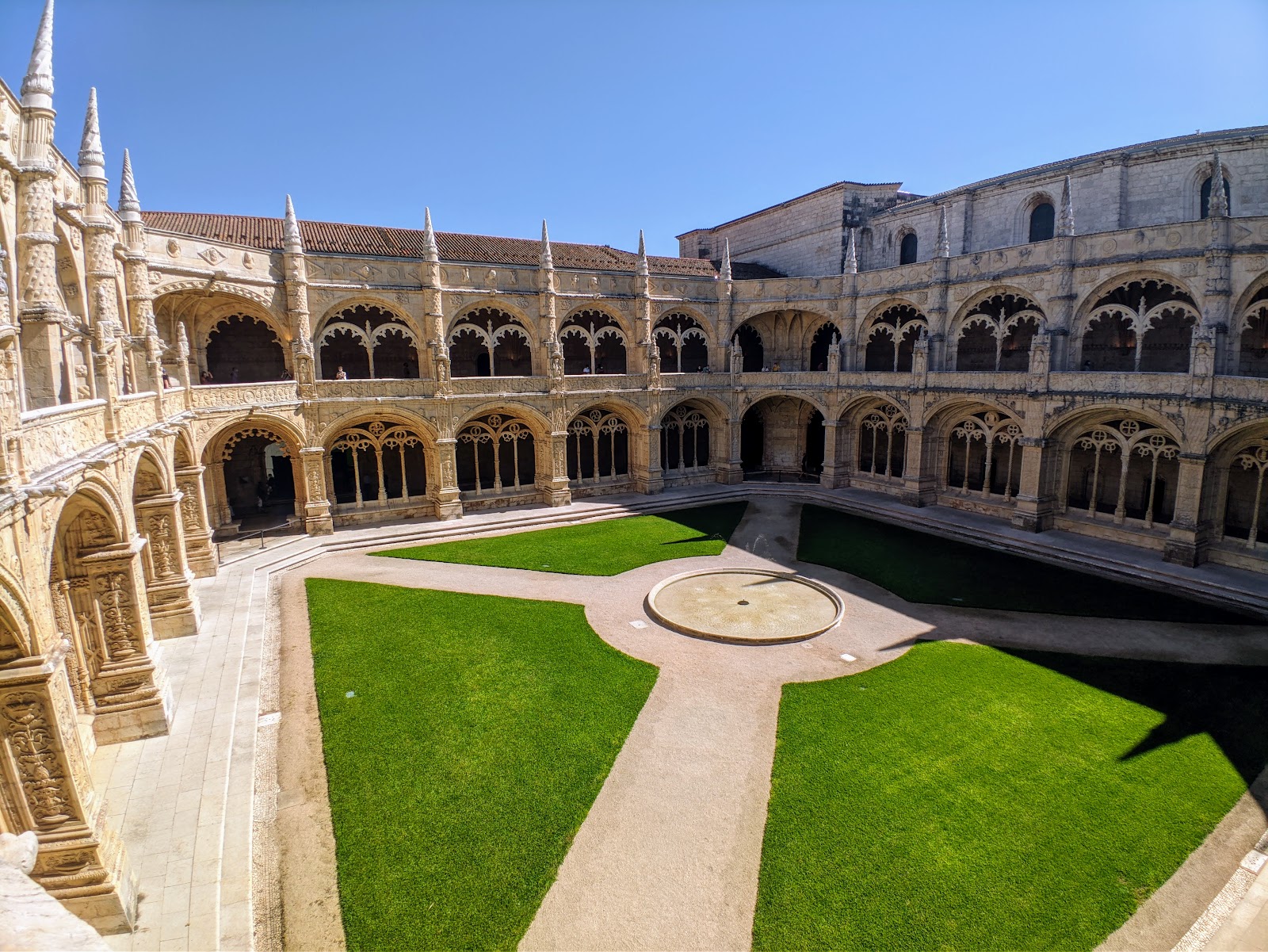 Walking down to the bank of the Tagus estuary, we stopped by the Monument to the Discoveries, built in 1960 to commemorate the 500th anniversasry of Henry the Navigator’s death. A concrete tower shaped like a caravel, each side features several of Portugal’s most famous explorers.

Our next stop was the National Coach Museum. Queen Amélia founded the museum in 1905 to house the royal family’s extensive collection of royal coaches. Today, its two large buildings house over 70 coaches used by Portuguese and other European royalty.

After a quick stop for ice cream, we took a long bus ride out to the Calouste Gulbenkian Museum. Portugal’s best art museum, the Gulbenkian’s collection contains a vast array of pieces dating from antiquity. We rode the subway back to our apartment, stopped by the Praça do Comércio to try some Portuguese wines at the Wines of Portugal tasting room. Then we walked over the Barrio Alto neighborhood for a delicious seafood dinner at Mar ao Largo.

The next morning, we road a commuter train about an hour and a half to the town of Sintra. Famous for its castles, Sintra’s highlight is the Pena Palace, a fairytale castle built on a high hilltop. We also visited the ruins of the Moorish Castle, constructed during the 8th and 9th centuries by the Iberian Peninsula’s Muslim rulers. It was fun to walk along the eerily overgrown walls and take in the spectacular views. Our last stop in Sintra was Quinta da Regaleria, a manor built in the early twentieth century by a disgruntled monarchist after the ouster of Portugal’s royal family. While the manor is beautiful, the real highlight is the grounds, which are a maze of stone towers, tunnels, wells, and secret passageways. 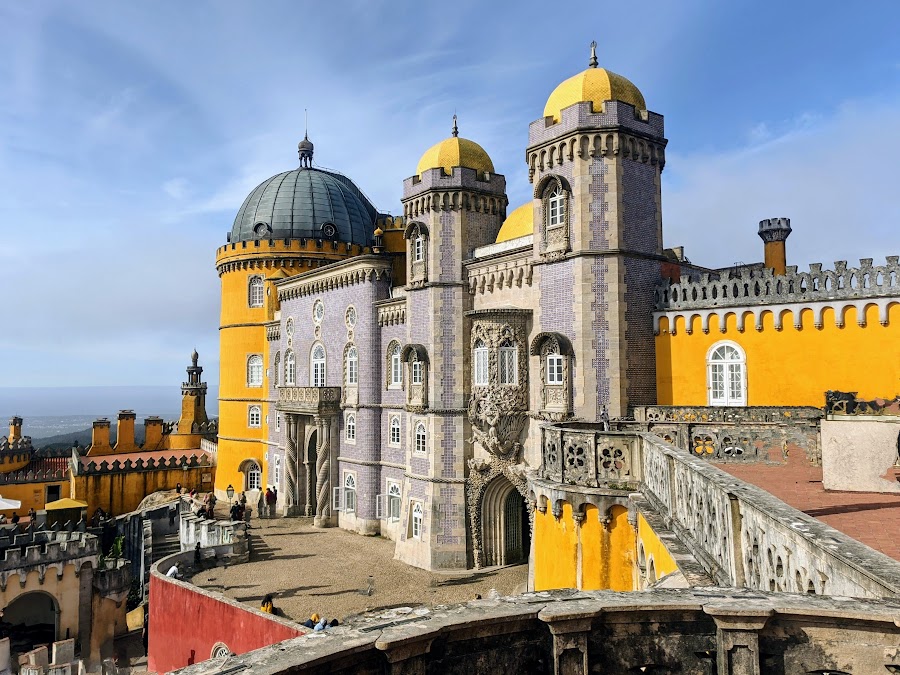 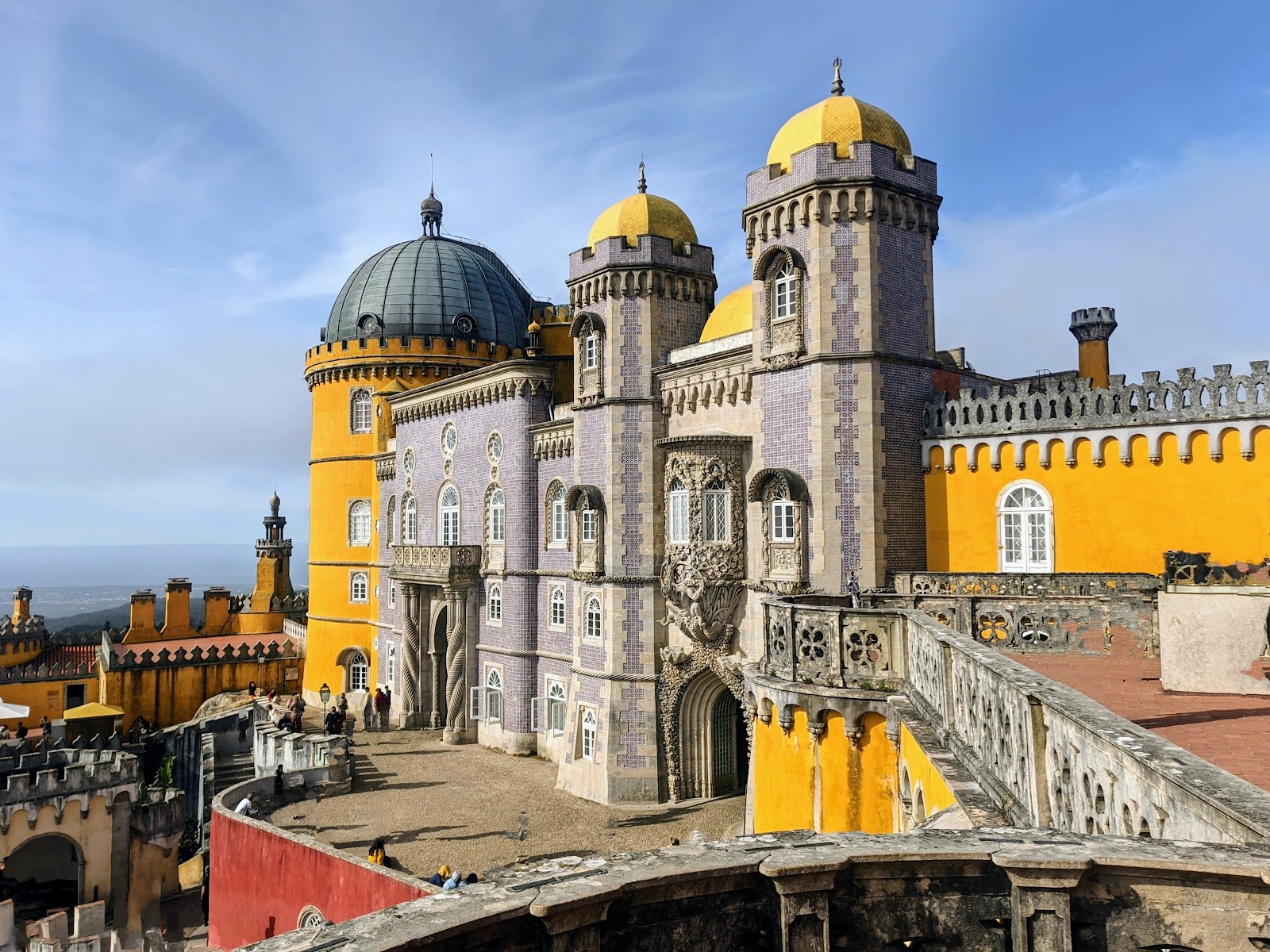 Returning to Lisbon, we explored the Bairro Alta neighborhood, perched on one of the hills overlooking the city. We took in the views and visited Carmo Convent, a church whose roof collapsed during the devastating 1755 earthquake but whose walls still stand. Its very cool to explore the roofless church, and it now houses a small museum. In the evening, we tried a Mozambican dinner at the hip Cantinho do Aziz. 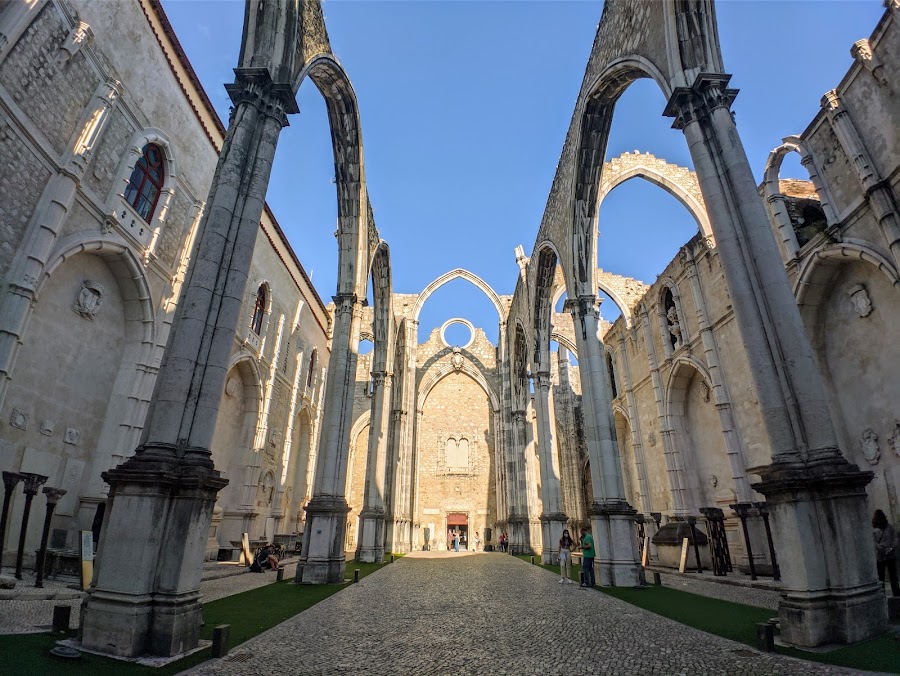 The ruins of Carmo Convent 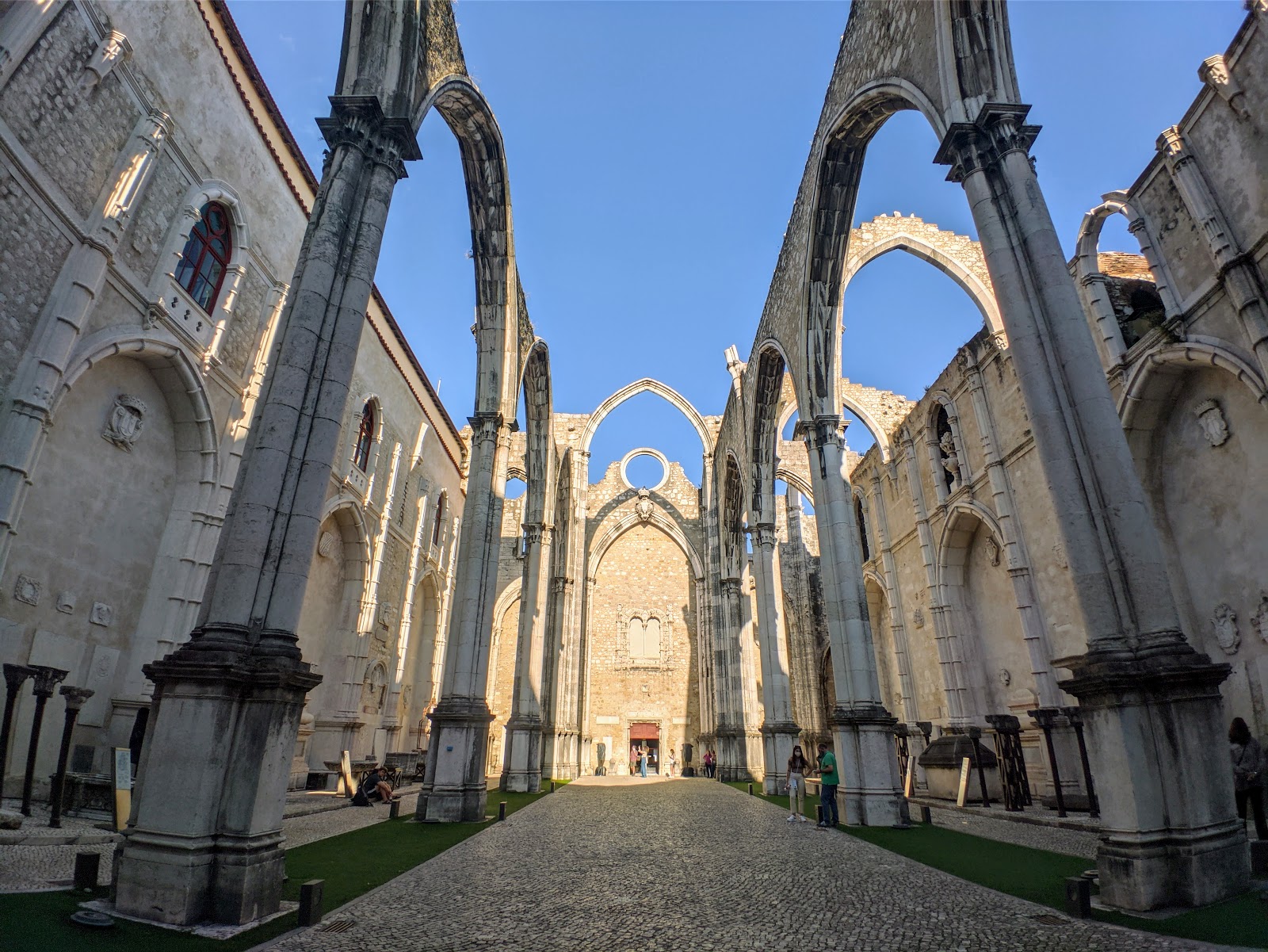 We spent the next day exploring Évora, a hill town east of Lisbon. The town’s most famous attraction is its Chapel of Bones, which is built (as you might guess) mostly from human bones. Concerned about their society’s materialism, a group of Franciscan monks built the chapel to remind the wealthy townspeople of the ephemereal nature of life on earth. They left a message above the chapel door: “Nós ossos que aqui estamos, pelos vossos esperamos; in English: “We bones, are here, waiting for yours.”

Leaving the creepy chapel, we took a walking tour of Évora, exploring the town’s winding streets, Roman temple, and cathedral. We ate lunch on the main square, Praça do Giraldo, and tried some wine at the Ervideira Wine Shop and some ice cream at Fabrica do Gelados. Then we caught the train back to Lisbon, where we enjoyed a fantastic dinner at Clube de Jornalistas.

It’s a long drive—about three hours—south from Lisbon to the Atlantic Ocean, but well worth it to visit the gorgeous Algarve coast. We spent the next two days enjoying the wonderfully welcoming but not-too-busy beach town of Salema, exploring the historical sites at Sagres (where Henry the Navigator’s school for explorers was sited), and tasting the incredibly fresh local seafood. 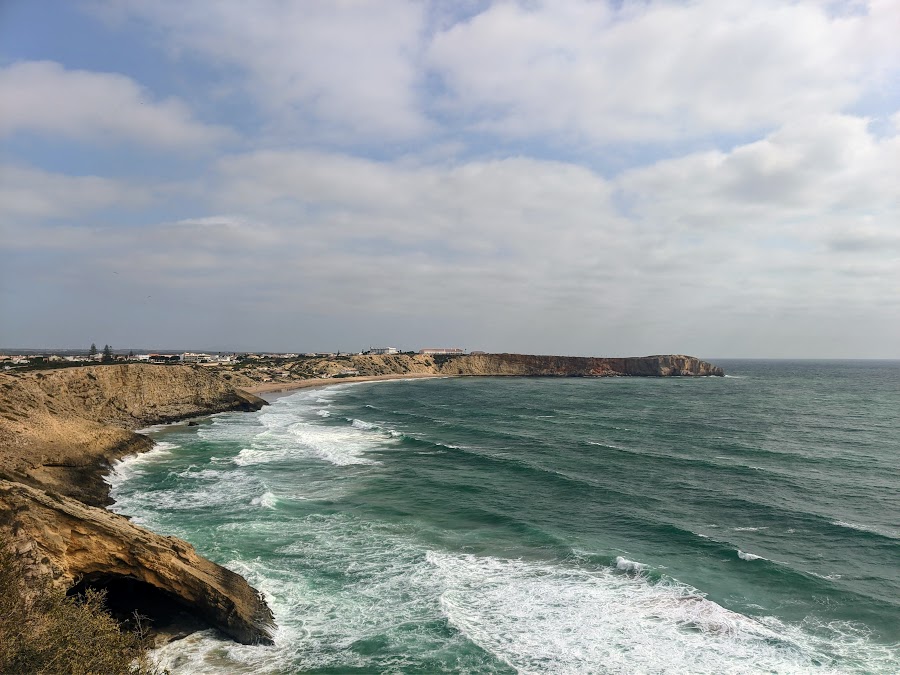 Cliffs and beaches at Sagres 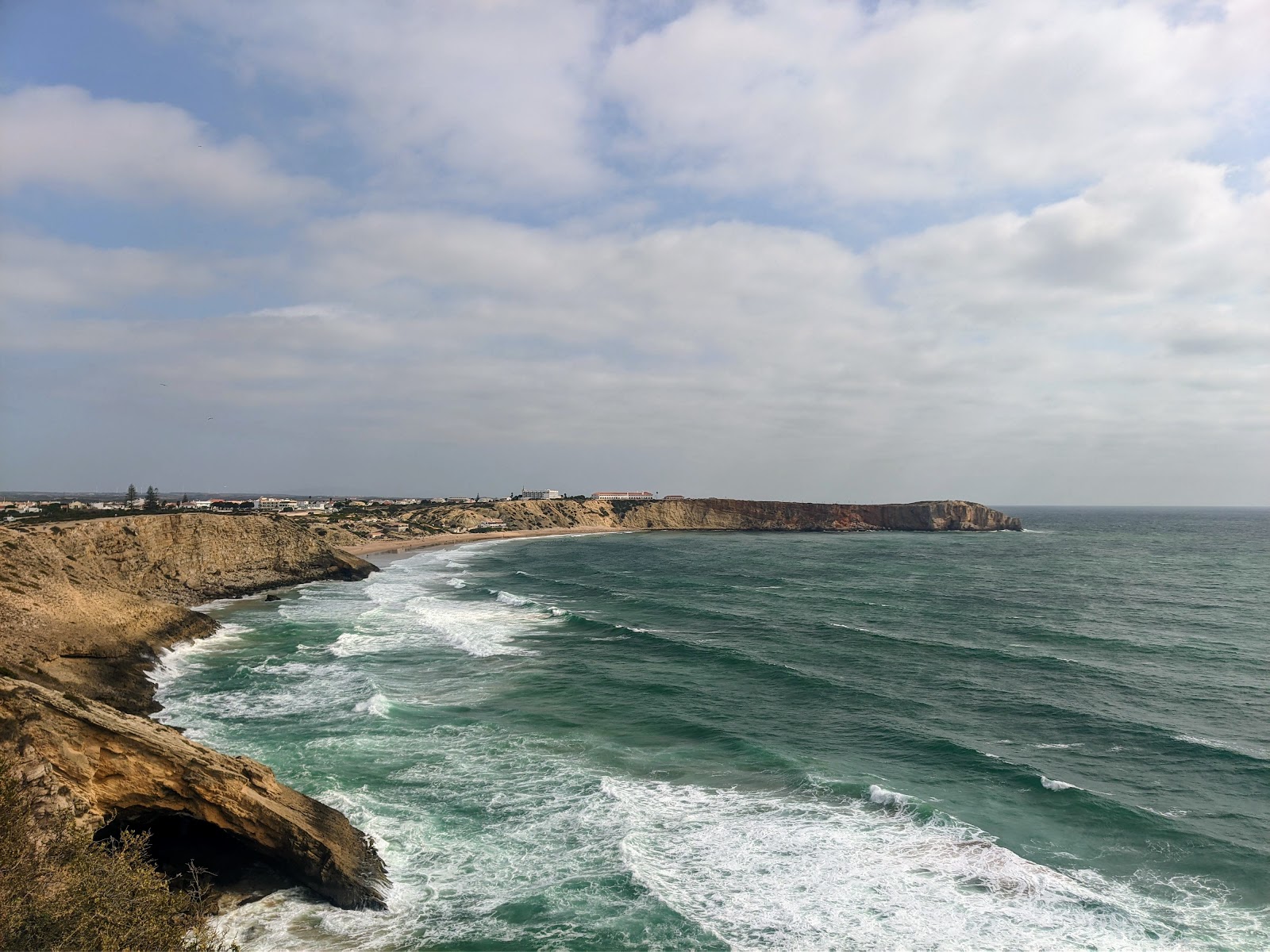 Reluctant to leave the relaxing Algarve seashore, we drove back north, past Lisbon, to Óbidos, a small town that looks like it belongs in the Middle Ages. It’s a picturesque walled town with a towering castle. We walked the walls and saw the sights before retiring our bed and breakfast. A gap in the Óbidos town wall The next day brought more driving. We went north to Nazaré, a beautiful beach town with spectacular ocean views and some of the world’s biggest surf. We also had an excellent lunch at Sitiado. Then we cut inland to Alcobaça, whose main attraction is its monastery. Our next stop was Batalha, also famous for its stunning monastery featuring gorgeous unfinished chapels. Work began on the chapels around 1434 under the patronage of King Duarte to serve as a resting place for the king’s family. But the deaths of the king in 1437 and the master builder in 1438 brought a premature end to their construction. Though the walls and interiors are lavishly carved and decorated, the roofs were never finished, so the beautiful chapels simply open onto the sky. 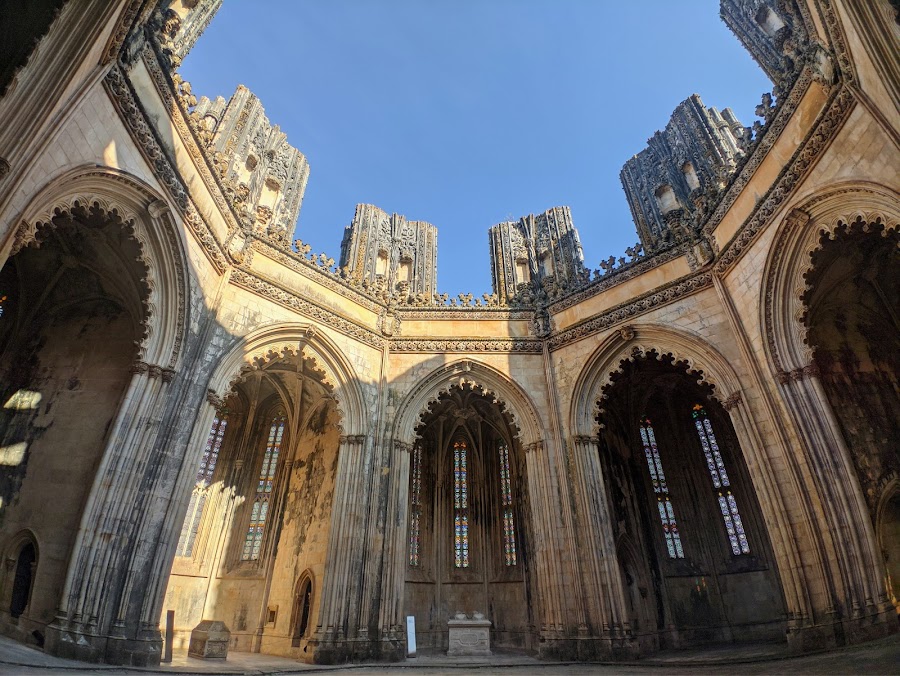 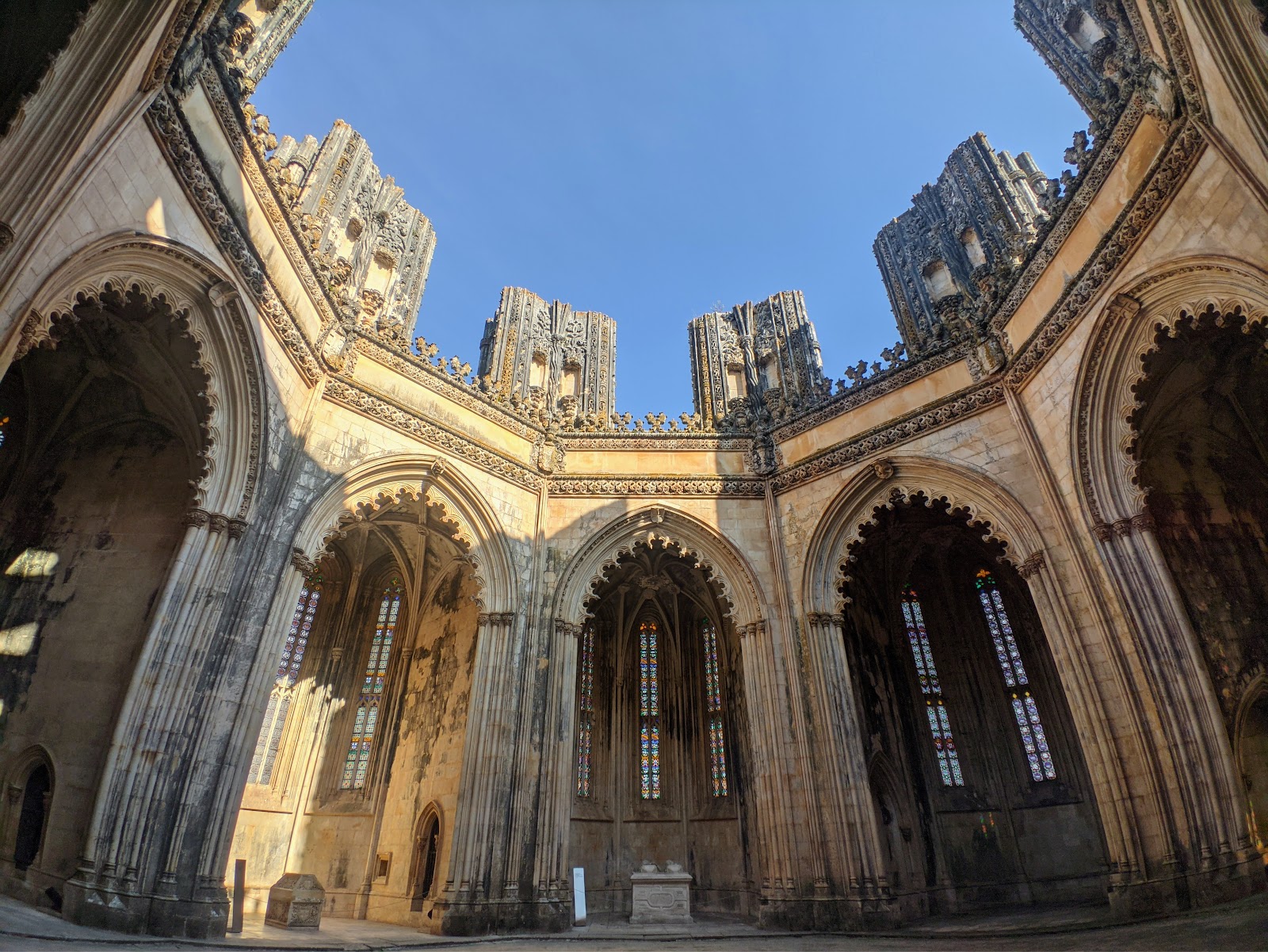 We pushed onto Tomar, another quaint hill town. Tomar is best known for its Convent of Christ, a castle built by the Knights Templar in the 12th century and featuring a beautiful round church. We strolled along Tomar’s riverfront, grabbed a drink, and then finished our day by driving on to Coimbra.

Coimbra is famous for its university, established in 1290 (in Lisbon; it moved to its present location in 1537) and one of the world’s oldest universities in continuous operation. Much of the university is dominated by imposing and uninspiring fascist architecture, but the medieval main quadrangle remains. We walked through the old part of the university, exploring the old buildings and the wondrous Biblioteca Joanina, a baroque library with a stunning interior. The National Museum Machado de Castro is well worth a visit; it’s built on top of Roman tunnels that you can explore and houses a collection of art and architecture from throughout the region’s history. We continued on with a walking tour of the city, and enjoyed some fado music (traditional blues, typically accompanied by the twelve-stringed Portuguese guitar) at the Cafe Santa Cruz. 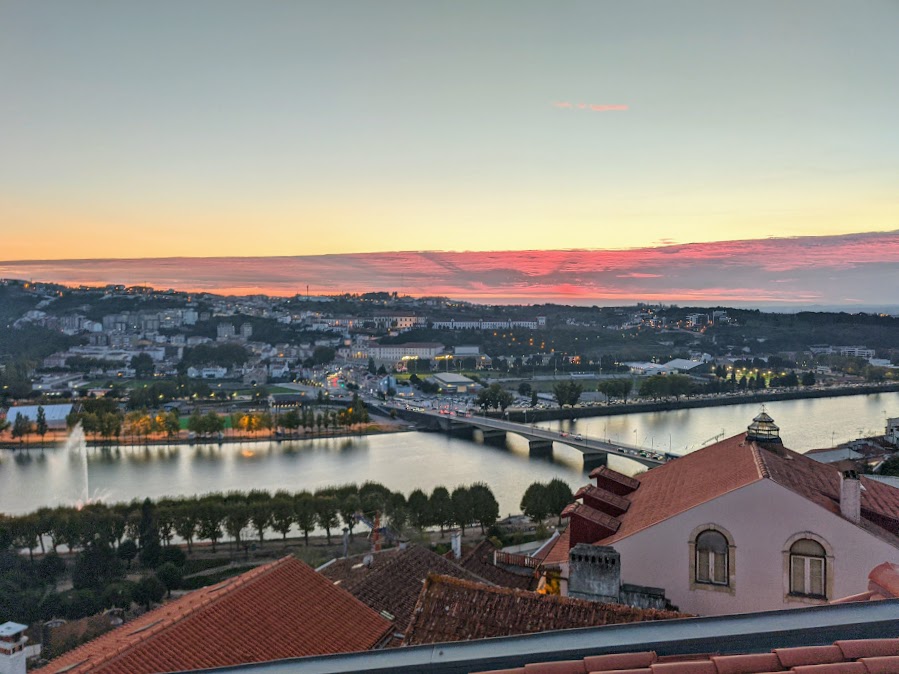 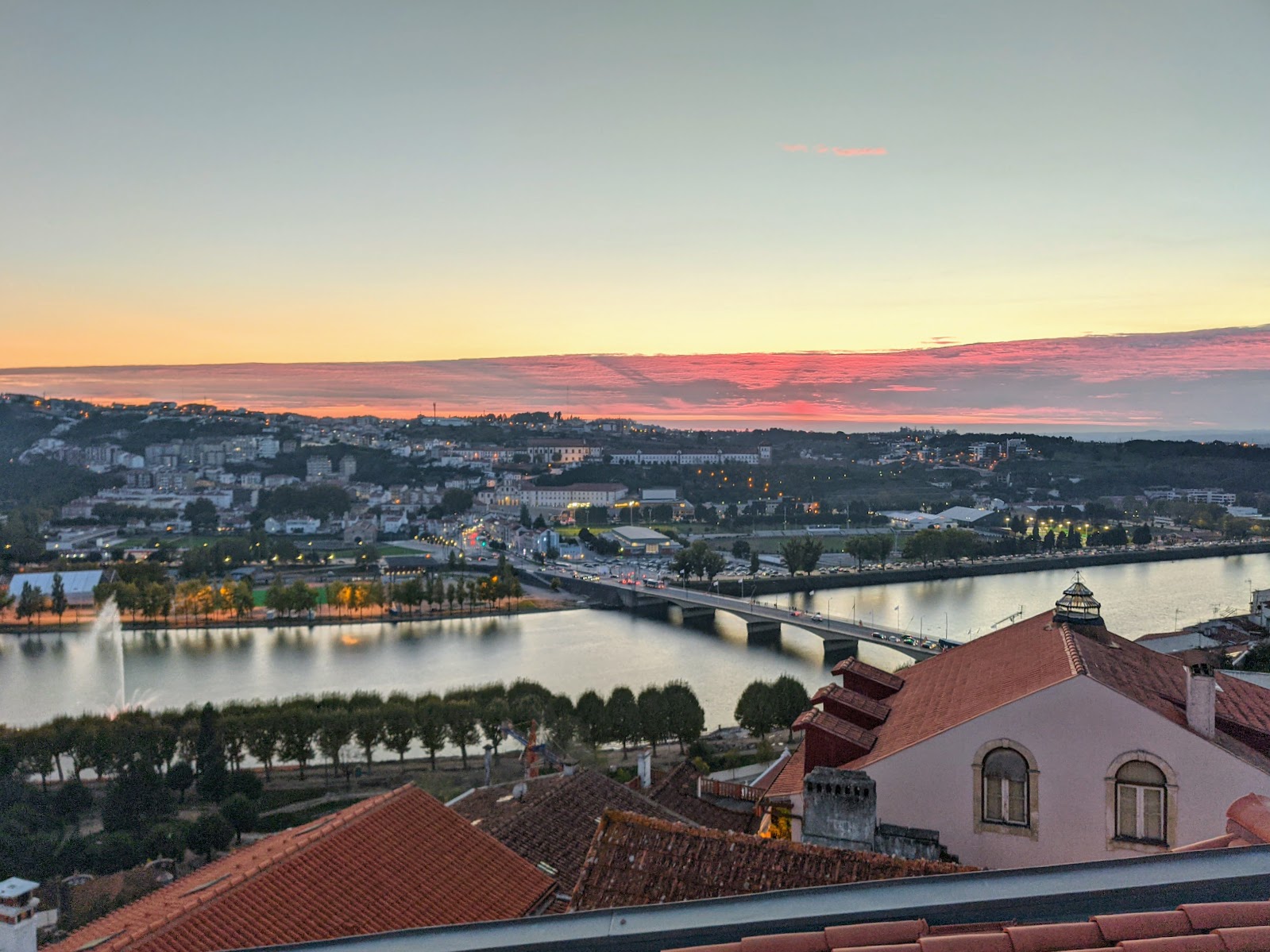 The next day, we drove north into Spain. After a brief stop in the coastal town of Vigo, we reached Santigo de Compostela, a beautiful town featuring the famous Santiago de Compostela Cathedral, the traditional end of an historical Catholic pilgrimage route. We spend the following day exploring the town, visiting the chapel, and driving to Lugo (about an hour and a half away), the site of the most complete Roman fortifications in Western Europe.

We returned to Portugal and drove into the breathtaking Douro Valley, a beautiful river valley in its own right, but most famous as Portugal’s best wine region. We toured the Quinta do Vallado winery and tried several excellent wines (including a port, for which the region is renowned). Then we drove to Quinta do Ventozelo, a fantastic winery and hotel perched on one of the valley walls. We relaxed, enjoyed the pool and views, and had an excellent meal and wine tasting. The Douro Valley was so magical that we extended our stay, spending another night at the tranquil and relaxing (and equally beautiful) Quinta da Gricha. 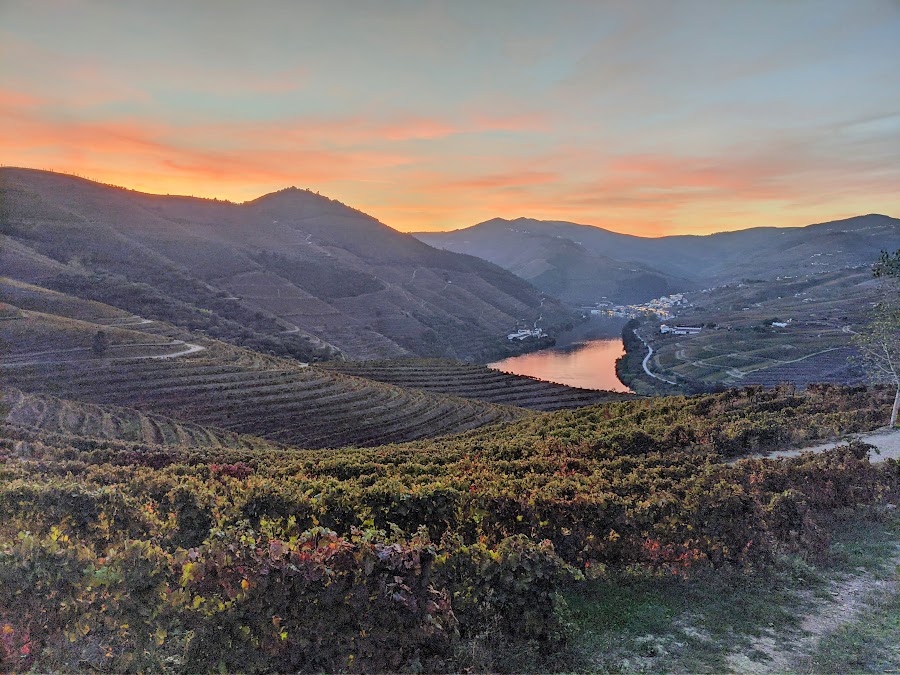 Sunset over the Douro Valley from Quinta do Ventozelo Leaving the Douro Valley, we drove west to Porto, Portugal’s second-largest city. Though it’s sometimes described as a grittier, less friendly version of Lisbon, we found Porto to be beautiful, interesting, and a lot of fun. We explored the town’s churches and shops, and took in the remarkable views. In the morning, we climbed the steps of the Clérigos Tower, which provides an overlook of the city from 250 feet up. We ambled out to Foz, a charming neighborhood on the coast, where ate an extended lunch on the beach. Then we drove back to Lisbon, arriving late in the evening. We stayed in a hotel near the airport and flew home early the following day.