Tucked away in a corner of the John Muir Wilderness, Red Slate Mountain isn’t climbed all that frequently. That’s a shame, because it’s a fun climb, and the summit offers amazing views—at 13,129 feet, the only higher Sierra to the north is Mount Ritter (though some sources list Red Slate at 13,163’, which would make it higher than Ritter), and the next higher peak to the south is nine or ten miles away. It’s simplest to climb the mountain from the east: you start at McGee Pass Trailhead off of Highway 395 (near Tom’s Place), and it’s about 22 miles and 6,000 feet of elevation gain to the summit. It’s typically done as an overnight trip, but can be done as a very long day hike.

We climbed the mountain from the west, which is a more complicated trip. Originally, our intent hadn’t been to climb Red Slate. For his 65th birthday, my father wanted to complete the only leg of the John Muir Trail that he’s never hiked, Lake Thomas A. Edison to Red’s Meadow. But the logistics of a trip like that are tough; you begin on the western side of the Sierra Nevada Mountains and finish on the eastern side, so arranging transportation to and from the trailheads is a nightmare. Instead, we decided to enter and exit at Edison Lake, hiking the John Muir Trail to Tully Hole, where we’d cut off up Fish Creek to climb the mountain.

We arrived at the Vermilion Valley Resort (VVR), a rustic place on Edison Lake on a Monday evening. The last part of the road to the lake, from Huntington Lake to Edison Lake, is rough. It’s mostly paved, but there’s only one lane, it’s full of gnarly potholes, and parts devolve into gravel or sand. People do the drive in sedans, but I’d recommend an SUV. After a winter with low snowfall in the middle Sierra, Edison Lake was quite low by early August. We still had a fun campfire in the yard in front of our cabin overlooking the lake. We spent much of the next morning and afternoon organizing our gear and packing up, then drove out a few miles to Mono Hot Springs. Then we returned to VVR for dinner.

In the morning we put the finishing touches on our packs and rode the ferry across Edison Lake to the trailhead. The trail started climbing quickly, and after gaining about 1,500 feet of elevation, we found a campsite on Silver Pass Creek. We had a delicious dinner of cous cous with red peppers and andouille sausage, then spent the night sleeping under the stars. A meadow along Silver Pass Creek

The next day we continued our climb to Silver Pass, which, at about 10,920 feet, was our first high Sierra pass. Looking north from the pass, the stunningly beautiful Indian Lakes Basin was laid out benath us. After a short break and some photos at the pass, we started down the north side. We followed the John Muir Trail into Tully Hole, where I took a quick dip in the creek. From Tully Hole, we ascended to the junction with the McGee Pass Trail. There we left the John Muir Trail and followed Fish Creek eastward, fording Fish Creek. At Horse Heaven, a large meadow with a designated pack station, the trail crosses Fish Creek again (if you hit the pack station, you’ve gone too far). After the crossing, the trail ascends steeply about 400 feet. At the top of the incline we found a nice campsite on a rise above the creek. 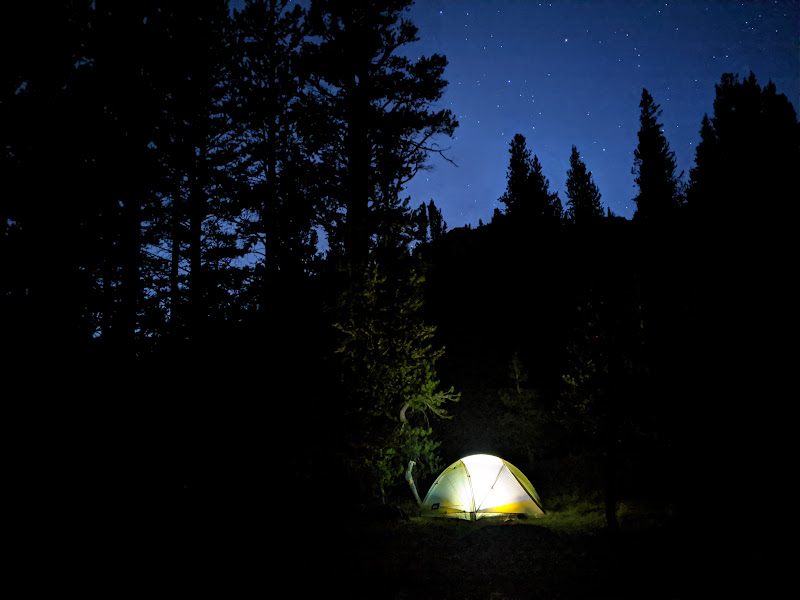 Our campsite on Fish Creek

When we left camp in the moring, it felt wonderful to leave our heavy packs behind—we took only essentials for our summit assault. About a half mile beyond our campsite, the trail crossed Fish Creek once more. From there, it ascended through a series of gorgeous alpine meadows. After the last meadow, the trail became a rocky path of steep switchbacks at around 11,400 feet of elevation. We finally reached McGee Pass at 11,960'. One of the meadows below McGee Pass

The trail isn’t maintained above McGee Pass. We pretty quickly found a use trail that led directly up from the pass. After a few hundred feet, we reached a small plateau, and the trail disappeared. We couldn’t find the trail immediately on the far side of the plateau, so I started leading us up the steep slope of slippery shale. Pretty quickly I found another use trail; there are a few different use trails up the slope, but all of them ascend in steep, tight switchbacks and eventually converge.

Working slowly, we picked our way up the mountainside. Experienced routefinders should have little trouble following the use trails, though the trails stop and restart intermittently. Novices will probably have some difficulty. As long as you don’t go too far southeast, there’s no true scrambling and not much exposure, though the trail does get quite steep and disappears in places. About 500 feet below the summit, the mountain’s namesake red shale gives way to whiter rock. Around 12:20 PM, about four hours after leaving our campsite, we were standing on the summit. The view from the summit is incredible in every direction. You can’t see any peak that appears higher than the spot where you stand. We ate lunch, signed the register, took photos, and then began the long descent to our campsite. We returned to camp a little after 4 PM, in time for a quick swim in the creek, which felt fantastic.

The Goodale Pass Trail ascends briefly before dropping to beautiful Papoose Lake. We set up camp by the lake. It was the early afternoon, so we had time to take a swim and explore the surrounding area. The Lake of the Lone Indian lies a short way to the northwest and few hundred feet down, and it’s even more spectacular than Papoose Lake. As tempted as we were to camp there, we figured that going out of our way (and descending) wasn’t worth it. The Lake of the Lone Indian

We did a little fishing (I caught only two small trout, both of which I released). We cooked our last back country dinner, and watched the sun set and the sky darken. The stars were breathtaking, and we had a wonderful view of the Milky Way. I spent some time taking photos of the night sky before going to sleep. The Milky Way from Papoose Lake

In the morning, we ascended to Goodale Pass. Papoose Lake is at about 10,300 feet, but the pass is just above 11,000, so it was a tough climb. From there, the trail descends steeply about 1,200 feet into the Upper Graveyard Meadow. Once you reach the meadow, the trail flattens out, and it’s a long but beautiful walk through the meadows. We reached the junction to the trail to Devil’s Bathtub at about 12:40 PM, still several miles from VVR. We all desperately wanted burgers at VVR, but we knew the resort stopped serving lunch at 2 PM. So I went ahead and hiked quickly, reaching VVR at 1:47, just in time to put in our lunch order. When my dad and brother arrived, we ate our meal and toasted with some cold beers to celebrate the end of an excellent trip.