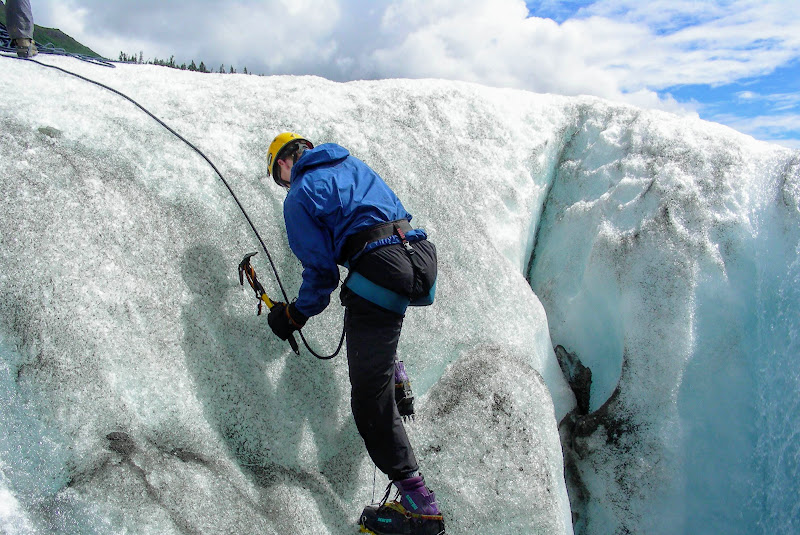 I spent two months in Alaska during the summer of 2007 through an environmental sciences field study program. On our day off, we decided to go ice climbing on the Root Glacier, one of the two major glaciers in the area.

We took a shuttle to Kennecott, an old mining town that sits above the glacier. Our guides were two women, Elizabeth and Betsy. They outfitted us with gear: plastic mountaineering boots, helmets, and crampons, and together we hiked a mile and a half down to the glacier. We arrived beneath an ice wall, and Betsy and Elizabeth walked around behind it to its top and set up an anchor of three ice screws. Me on the wall

The first climb we did was a straightforward low angle wall of soft white ice. By kicking in my crampons hard and dropping my heels, I could force all four of my front points into the ice, giving me a strong purchase. Betsy and Elizabeth also showed us how to use ice tools—the short ice axes used by climbers. On the low angle climbs with soft ice, they would serve mostly to help us stay balanced. However, on steeper climbs with harder ice, the ice tools have to take weight.

Most of us climbed the wall fairly easily. Elizabeth and Betsy set up two ropes on the anchor, so we each tried both of the climbs on the wall. The ice was so soft that planting our axes and crampons was very easy; no one fell or even slipped off balance.

After this first climb, we took a lunch break and then watched as our guides began setting up an anchor above a moulin. A moulin is a vertical shaft worn into a glacier by a rock or similar debris falling through a crack in the ice. Often, they serve as conduits for surface melt water streams to drop down to the tunnels and channels within and beneath the ice. The moulin to which they took us was about six feet in diameter and thirty feet deep. It dropped as straight as if it had been drilled, and a waterfall tumbled down its southeastern side. Climbing out of the moulin

I was the first to climb the moulin. Elizabeth lowered me down about fifteen feet below the surface of the glacier. I kicked my crampons into the ice, leaned forward and planted my tools above my head. Testing the tools by putting weight on each in turn told me that they were securely planted. But as soon as I lifted one of my feet to start climbing up, I slipped off my precarious stance and fell about a foot before Elizabeth caught me.

Trying again, I kicked harder and planted my ice tools with stronger thrusts. This time, my points held and I was able to begin climbing. The blue ice inside the moulin was much, much harder than the soft ice we had climbed earlier. It tended to shatter when impacted by a crampon or ice pick, so only by pounding very hard could I plant my gear securely. But I learned fairly quickly and climbed to the top of the moulin without incident. Grush in the moulin

The rest of the group took turns climbing the moulin. Several people fell as I did, including Cody, who fell at the very beginning of his climb. For some reason, Betsy did not manage to catch Cody quickly, and he fell several feet before the rope held. The moulin narrowed toward its bottom, and Cody had fallen almost into the path of the freezing waterfall. Pushing himself away from the waterfall with his feet, Cody tried to keep climbing, but he could not get a good purchase on the ice and fell again and again.

As Betsy held Cody on belay, Elizabeth swung into action converting the belay system into a pulley. The rest of us tugged on the rope and managed to pull Cody out of the moulin. Cold, wet, but exhilarated, we hiked back to Kennecott energized by our tantalizing introduction to this incredible sport.