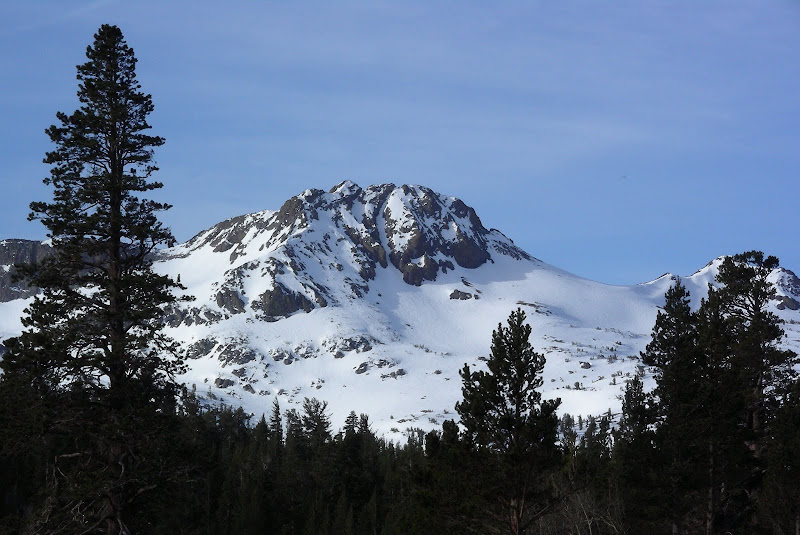 Just a few miles east of Kirkwood Ski Resort, across Highway 88 from Carson Pass, lies a mountain called Round Top. At 10,381 feet, the peak looks daunting, but it requires no technical climbing to reach the summit. I attempted to climb the peak with a group of nine other Stanford students through Stanford’s Outdoor Education Program.

We stepped out of two monstrous pickup trucks into a Sno-Park at Carson Pass around 11:30 PM on a Friday night. The beds of both pickups were full to the brim with backpacks, snowshoes, harnesses, shovels, and other gear necessary for our summit assault. The spring night was clear but warm, so we decided to sleep out under the stars in the parking lot between our trucks. 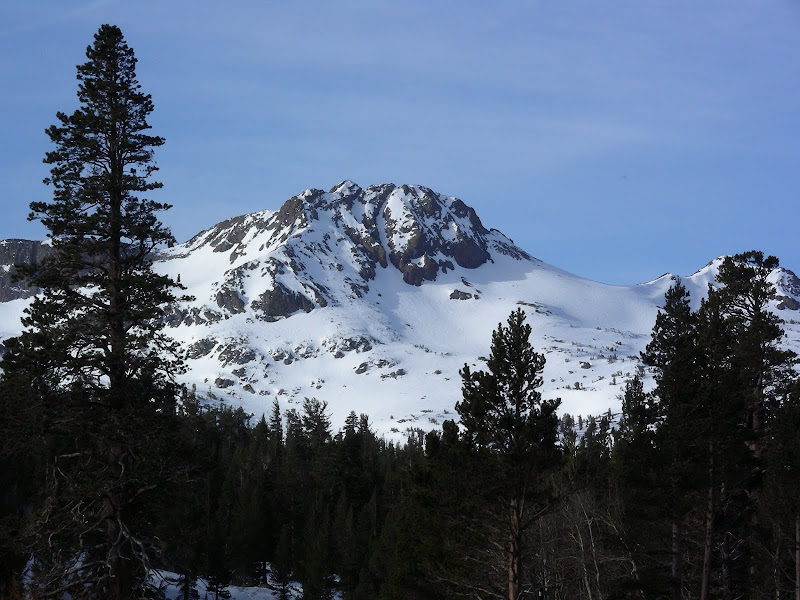 We awoke on Saturday morning around 8:30 to find the weather sunny and warm and started cooking a breakfast of oatmeal and hot chocolate. As we ate and prepared our packs for the climb, we saw a car come screaming down Highway 88, spin out of control into the wrong lane, over-correct and sink into the trench on the side of the road. We all ran down the highway and helped the car’s occupants—two ski bums, one of whom worked at Kirkwood—push their car out of the ditch. After that slightly random interlude, we returned to our preparations.

Our packs and equipment ready, we crossed the highway into the snowfield south of Carson Pass. Strapping on our snowshoes, we began trekking off-trail through the forest towards Woods Lake, which we reached in a few hours. We settled down at a picnic table half covered in snow at the lake to eat lunch. Despite the warm weather and lack of snowfall during the winter, the lake was still mostly frozen over and there were several feet of snow on the ground. 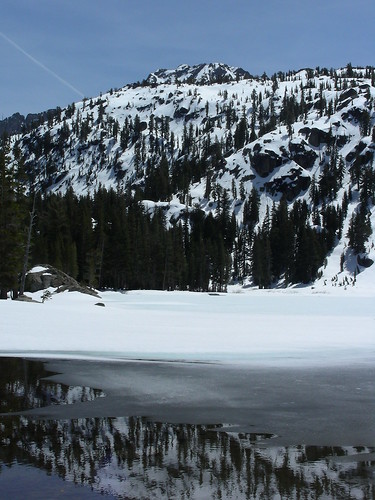 To the south of Woods Lake lies a high, steep ridge. We’d noticed on the maps that, about halfway up the ridge, there was a spot marked “Lost Cabin Mine”. Because the safest route up the ridge strayed reasonably close to the mine, we decided to check it out. But as we approached the mine, several signs nailed to trees warned us that we were about to enter an active mining claim area, and that continuing in that direction would be trespassing. However, the least steep path up the ridge wove in and out of the mining claim, so we briefly entered the mining claim to find two wooden shacks, one with “Keep Out” spray painted in large friendly letters on the plywood that covered its windows.

Upon reaching the top of the ridge, it was only a short hike over gradually increasing elevation to our campsite, which we made in a small clearing. There was a large hill above the campsite, which we used for sledding and practicing use of our ice axes. One of the most common uses of an ice axe is a self-arrest, which involves stopping oneself from sliding down a snowy or icy slope. We would lie on our backs with our heads pointed downhill and have a friend push us until we started sliding down the hill. At that point, we would attempt to roll over and plant our axes in the snow to stop the fall. We also used the hill to learn about avalanche safety. We dug pits to test the quality of the snow layers and practiced searching for buried comrades with avalanche beacons.

After the ice axe and avalanche safety lessons, we started cooking a delicious dinner of burritos. Our kitchen was located on a rocky outcrop beneath a formation called Black Butte, a mix of rock and snow that rose abruptly to the southwest of our campsite. We ate dinner and chatted and laughed as we looked out at the incredible views of the forest and mountains around us. 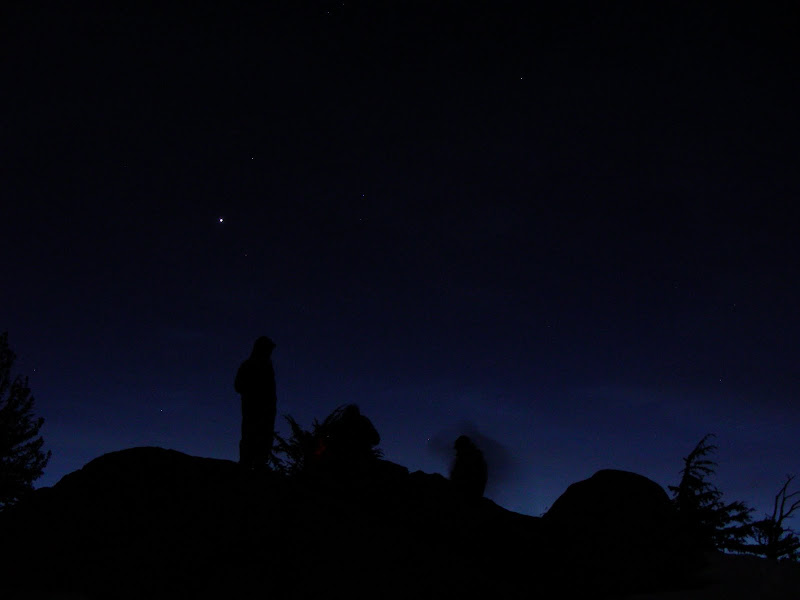 Climbers high on Round Top

After dinner, we munched on a huge block of Trader Joe’s chocolate and discussed plans for the summit attempt the next day. Our trip leaders estimated it would take five or six hours to reach the summit. Since we wanted to start our return to camp no later than noon, we decided to get up at five the next morning, be out of camp by six, and hopefully reach the summit by eleven or twelve. The weather that day had reached into the high 60s or low 70s, and the night wouldn’t get colder than the mid 20s, so we decided to sleep outside again and forgo setting up all but one of our tents. After the sun set over the spectactular wilderness, we lay our sleeping bags on tarps and tent flies. We were in bed before 10 PM. 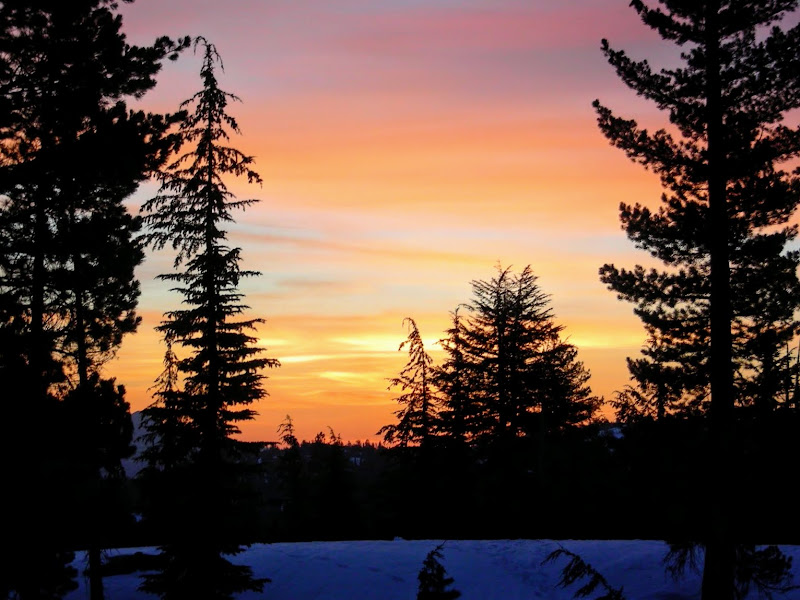 Sunrise from Round Top

The morning went according to plan, and we were hiking shortly after 6 AM. The sunrise was breathtaking, and the clouds retained their shades of red and orange well into the morning. As we climbed higher along the ridge towards the summit, it became clear that we were making excellent time. By 7:30 we were approaching final climb to a saddle between Round Top and its neighboring peaks, known as The Sisters. We ditched our snowshoes about one third of the way up to the saddle and continued the climb by kicking steps in the hard snowpack with our hiking boots. This task was made easier by the presence of the footprints of previous climbers frozen into the top layers of the snow, and reached the saddle rather quickly. 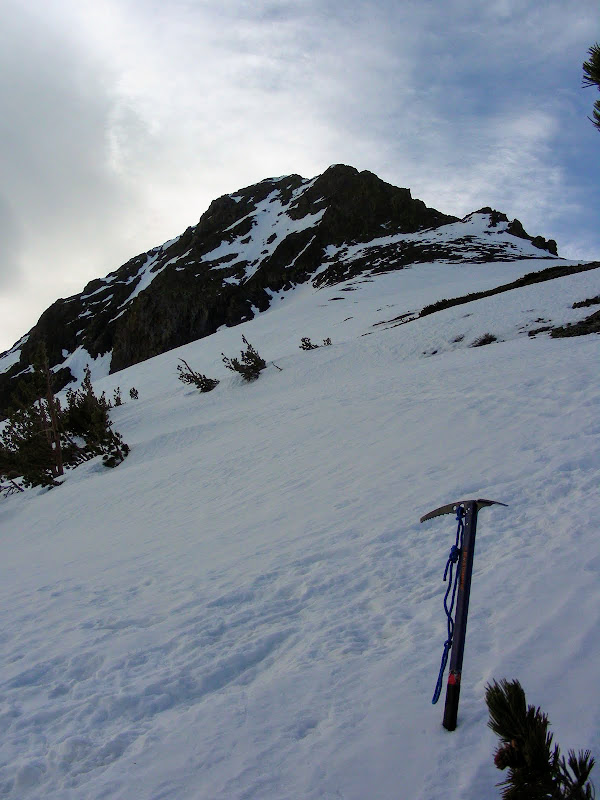 Looking up at the summit

The Kirkwood area is known for its high winds, and the saddle was swept with heavy winds that made it difficult to balance. Upon reaching it, we debated whether to climb the rocks to our left, or traverse to a snowy path that had looked relatively safe from below. The latter path turned out to be a dangerous mix of snow and rock, so we dropped our ice axes and started hiking up a scree field towards the rocks to the left. After a little scrambling, we looked around and there was nowhere higher to climb. We’d reached the summit. 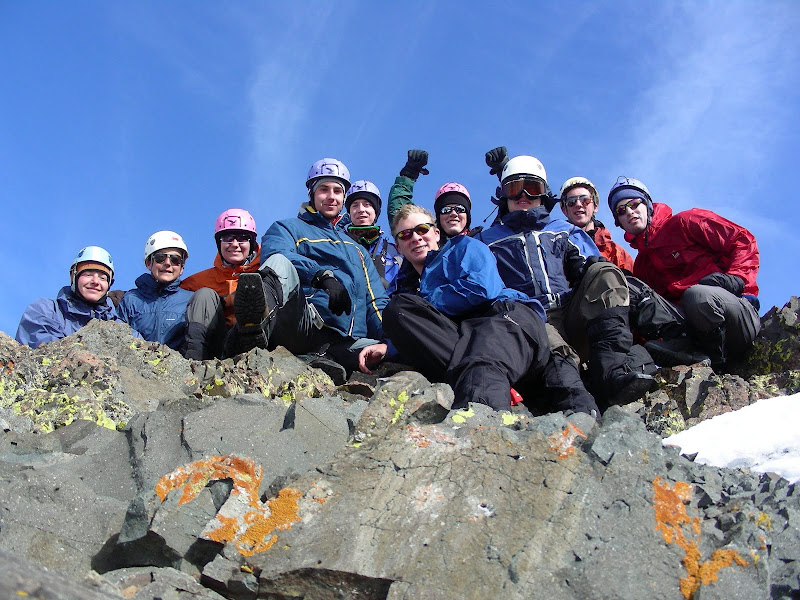 The group on the summit

We’d made it in astounding time; it was only 9 AM. The climb—which we’d expected to take 6 hours— had taken half that. By this point, the winds had only intensified. As we slapped high-fives and snapped pictures, my hat blew off my head and down the rock face beneath us. Because the biting wind made the summit extremely cold, we spent only a brief time on the summit before commencing our descent.

Though the climb to the summit was fast, our descent to camp was even quicker, and we reached our campsite by 10:30. We broke camp and packed up all the gear we hadn’t taken with us to the summit. Then we continued our descent, reaching Woods Lake by noon and eating lunch at the same picnic table we’d used on the way up. After that, it was less than two miles back to our car. As we emerged from the woods one by one onto the side of Highway 88, we joked about the thoughts of motorists who watched a group of fairly dirty people with snowshoes and big backpacks appearing suddenly from the trees on the side of the road.

We threw our packs back into our pickups and start the drive home. Because it was so early in the day, we only made brief stop at an A&W for root beer floats on the return journey. We returned to campus around 7:30 PM, happy and exhausted.