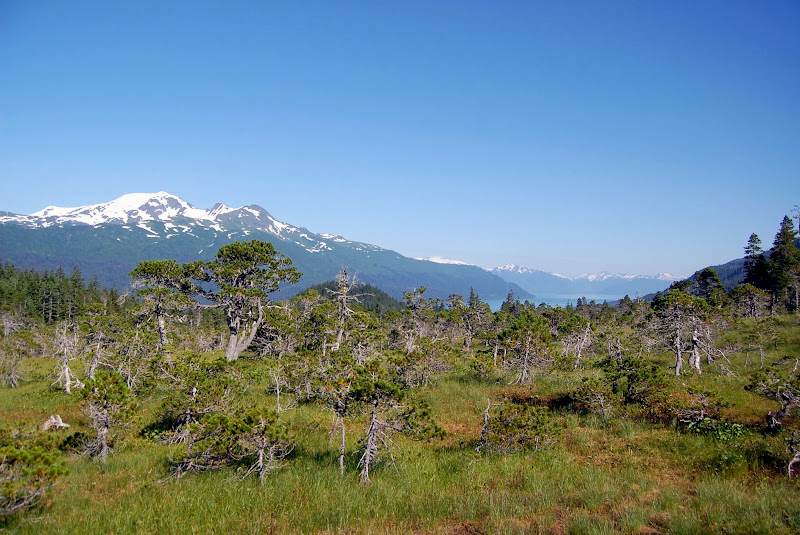 The town of Skagway is nestled on the shore of the Pacific Ocean in southwestern Alaska. It is situated at the northern end of Alaska’s Inside Passage, a busy shipping lane dotted with tiny, often uninhabited isles and rimmed by countless blue-white glaciers. In 1897, gold was discovered in the Klondike region, and soon thousands of prospectors flocked to Skagway. It became a bustling mining town, complete with its own railway, port, and brand of Old West lawlessness. But within two years the gold rush subsided, and Skagway’s economy collapsed.

Today Skagway is a small town with a population of 862. The Klondike Highway, a narow two-lane ribbon of asphalt, is the only artery connecting it to the outside world. The highway runs for 110 miles, linking Skagway to the Alaskan Highway. Despite its isolated location, Skagway benefits from a lively tourism industry. It is the access point for the White Pass and Chilkoot Trails, and it is served by several glacier flying companies. But most importantly, it is a stop on all the major Alaskan cruise lines, which bring thousands of tourists north from the lower forty-eight every summer.

It was during the summer of 2003 that I visited Skagway. As a celebration for my grandparents’ eightieth birthdays, my extended family decided to take an Alaskan cruise. We booked passage on the Dawn Princess, a behemoth of a ship that boasted several swimming pools, five restaurants, a theater, and a casino. The journey began at Vancouver, and the sturdy, 860-foot Princess crashed over the icy Alaskan seas with nary a shudder. Much of my time was spent playing table tennis with my brother and cousins. This was hardly the epic voyage reminiscent of the whaling journeys of yore that I had imagined.

But it was beautiful. The Inside Passage is a maze of fjords, glaciated islands, and craggy shores that fulfilled even my wildest dreams. Every so often we would spot whales gliding beneath the waves off of our prow. Ping-pong and the leviathans’ intermittent appearances, however, were insufficient to slake my thirst for adventure. I would often sit on the edge of the promenade deck, hands curled around the railing that encircled the balcony, gazing over the endless expanse of dark blue sea.

One day I awoke to find that my usual view of the ocean was obscured by a massive wall of ice. I rushed outside my cabin and discovered that the Dawn Princess had entered College Fjord, a popular stop on cruises. Our ship was lucky enough to have reached a vantage point only a quarter mile (most ships stay beyond a mile) from the 300-foot Harvard glacier. As I watched, a crack like a gunshot sounded. My eyes involuntarily jumped to the source of the noise, just in time to see a jumbled heap of ice and rock break loose from the glacier and crumble into the foamy depths. During the few hours we remained at College Fjord, Harvard continued to calve, and, absorbed in my awe for this unparalleled majesty, for a while I forgot my frustration with the contrived nature of my Alaskan voyage. Soon the ship began to turn in a broad, slow arc, and the glacier disappeared in the Princess‘s wake.

Over the course of the week-long cruise, we stopped at several Alaskan cities—Ketchikan, Juneau, Anchorage—and at each one participated in a “shore excursion.” These took the form of a hike, a tour of the town, river rafting, or some other similar activity. When the ship reached Skagway, we had a few hours to look around the town before we began the day’s adventure: a guided biking tour along the Klondike Highway.

As I descended the stairs of the gangway and entered Skagway’s harbor, I thought for a moment that I might have also stepped into the nineteenth century. Even today the town’s roads are relatively free of motor vehicles, and most of the old wooden buildings are complemented by wood-plank sidewalks. Several gold rush-era edifices still stand. Despite its small population, Skagway is Alaska’s largest city in terms of area, covering 455 square miles. During the summer, it rests on a green coastal plain. The Klondike Highway stretches east and up into snowcapped peaks that rise abruptly from the flat expanse of grassland.

As I walked the streets of Skagway, visiting shops, I noticed that most of the stores carried souvenirs called ulus. An ulu is a type of knife composed of a broad, gently curving blade and a stubby wooden handle. They come packaged in blue cardboard and polyethylene with a large white font shaped like icicles that proclaims “Genuine Alaskan Ulus.” A notice on the ulu’s box informed that the Inuit had used them for hundreds of years and prized them for their many uses, ranging from skinning animals to chopping ice for igloos to cutting hair. Beneath that, in much smaller font, the ulu manufacturer advised that, because of new airline restrictions following September 11, purchasers of ulus should pack their authentic Alaskan souvenirs in checked baggage. I observed dryly that the Inuit had probably never troubled themselves with such banal affairs as whether to check or carry-on their ulus.

My mother saw me holding the ulu and walked over to me. “Would you like one?” she asked. I gazed with juvenile disdain at the misguided tourists who waited eagerly in line to purchase ulus and other equally artificial mementos. I tossed the ulu back onto the display table where I had found it.

I left the shop and joined the rest of my family to begin our biking tour. It began with a ride up the Klondike Highway that included a recorded tour guide who pointed out such sites as the White Pass and Yukon Railroad. The WP&YR was a narrow-gauge rail line that shipped minerals from mines in the mountains to the port at Skagway before the establishment of the highway.

We continued the trip eastward and crossed the Canadian border. Though the guiding company had asked us all to bring passports, the border patrolment seemed distinctly unconcerned. In their defense, it was an unlikely crossing point for smugglers or illegal immigrants. They waved us through without checking anyone’s documents.

Soon the van stopped, and our guides began unloading bikes from a trailer. Our guides, Brian and Chris, were two good-humored twentysomethings with the same chin length curly black hair. They began a detailed mandatory safety talk: Chris reminded us that the bikes were equipped with handbrakes while Brian passed out helmets.

“Does anybody need assitance with their brain buckets?” Brian asked. Nobody did, and we began the ride back down to Skagway.

It was a sunny day with few clouds in the sky. But as the visitors admired the beautiful Alaskan weather, Brian reminded us of the meteorological realities.

“Yeah,” he said, “The weather’s nice for a few months in the summer. But not in the early spring or late autumn. And in winter, this place is the loneliest, most isolated, coldest place you can be. I think there’s a traveling doctor who comes by once a week, so people try not to get sick. Chris and I only spend summers here. We fly down to the lower forty-eight for the winter. So the folks who live here year-round kind of look down their noses at us ‘fair weather’ Alaskans. But I think we’re just smart Alaskans.”

I tried to imagine Skagway in the winter: the Klondike highway covered with snow and ice, buildings snowed in, weather often too stormy or unstable to fly in. The town could be, for all practical purposes, completely cut off from the outside world. Suddenly my dreams of a “genuine” Alaskan expedition semed less appealing.

Yet they did not subside entirely. We rode in a magnificent valley between two mountain ranges that climbed sharply up on either side. Black rock blanketed with snow surrounded us, and the spectacular allure of the Klondike took hold of me again. The gray road bisected by a double-yellow line was the only manmade imposition on the landscape, and once more I was able to disregard the superficialities that had plagued my journey. We stopped for lunch beneath a breathtaking waterfall fed by snowmelt from the weather-beaten summits above.

The bicycle ride ended as we rolled back into Skagway. But as we began walking back to the Dawn Princess, I noticed a shop I hadn’t seen during my earlier exploration of the town. It was a knife shop and looked less tourist-oriented than the others—there were no ulus in their bright cardboards packaging prominently flaunted in the windows.

I opened the door. The shop’s walls and display cases were lined with knives of all different types, but my attention was immediately drawn to a group of blades with intricately decorated ivory handles. The shopkeeper explained to me that the handles were created through a process called scrimshaw, which had been developed by whalers in ther 1830s and ’40s to decorate tools they had made from whale bones. All of the scrimshaw in the store were hand-carved, and I picked out a small knife with a two-inch locking blade. On the ivory handles was depicted a lone wolf prowling the tundra.

I returned to the Dawn Princess with my knife in my pocket. At the end of the cruise, I packed it in my checked baggage for the flight home. That knife still conjures memories of the spectacular Alaskan scenery and my frustration at the commercialization of nature and adventure. But each time I see it, I can’t help thinking that being a fair-weather Alaskan might not be so bad after all.