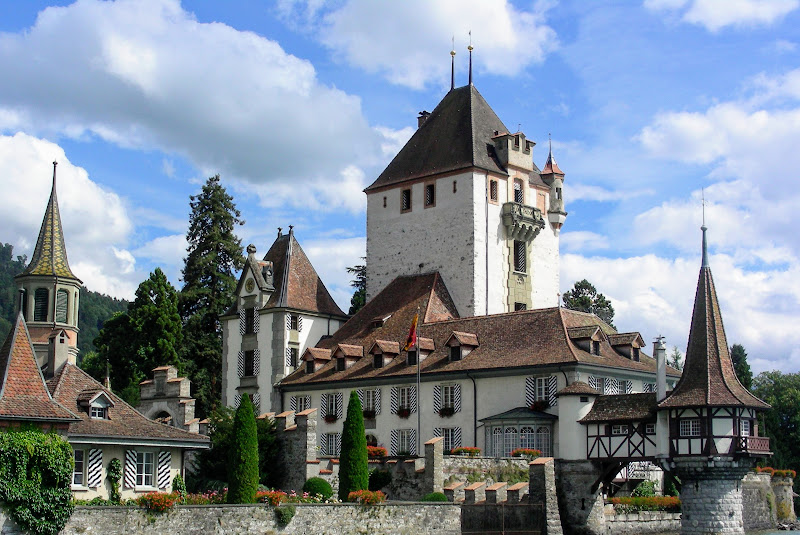 Landlocked in central Europe, Switzerland is an eclectic mix of cultures. In the north, it is predominantly German-speaking, in the west, French. Parts of southeastern Switzerland are indistinguishable from Italy—they speak Italian, eat Italian food, and everything from the architecture to the landscape seems Italian. On my tour of Switzerland in the summer of 2006, I managed to see all three areas. Each had its uniquely unforgettable moments.

We flew into Bern, Switzerland’s capital. Despite being the capital, Bern is a small city in the German-speaking region of Switzerland. The airport can’t handle jets, and the surrounding area is predominantly agricultural. We spent our first day exploring Bern and trying to combat jet lag.

The next day, we visited the towns of Thun and Oberhofen, about a half hour’s train ride from Bern. Oberhofen is a small town dominated by a large chateau, known as Schloss Oberhofen, overlooking Lake Thun. Schloss Oberhofen is a beautiful, tastefully decorated, and extremely well-restored castle (see picture above). After thoroughly examining the castle’s wealth of rooms and grounds, we took a boat back to Thun. 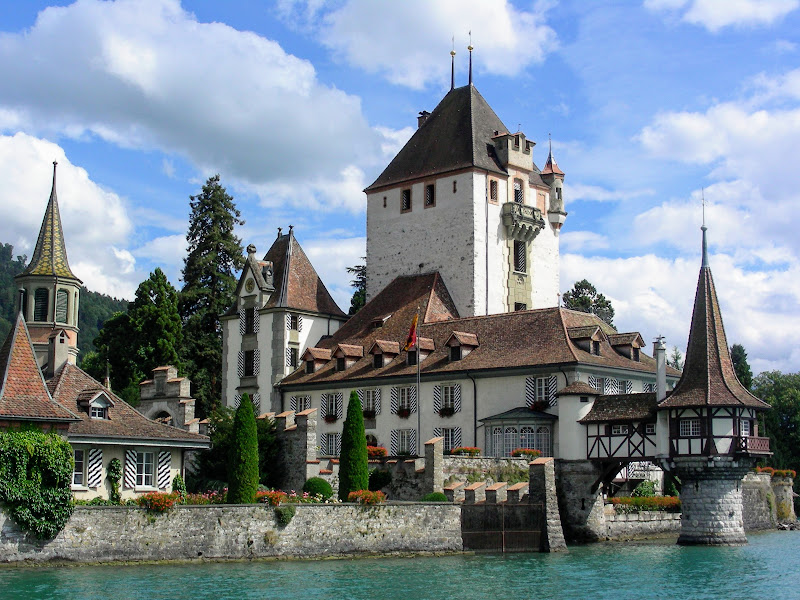 Thun is also extremely charming. It has its own pair of castles situated above the town proper. Larger than Oberhofen, it also has streets of neat shops, a covered bridge, and excellent cuisine. We spent the rest of the day looking around Thun, ate a wonderful dinner, and took the train back to Bern.

Bern is also fairly close to the Swiss Alps, and my family definitely wanted to explore the mountains at some point during our time there. So the day after we visited Oberhofen and Thun, we took the train through Interlaken to Lauterbrunnen (about 2 hours and 20 minutes). Next we got on a train that slowly chugged up a very steep track through Wengen to Kleine Scheidigg, the town at the base of the infamous Eiger (for an excellent outline of the Eiger’s mountaineering history, see Jon Krakauer’s Eiger Dreams).

Touting itself as the highest railway in Europe, the Jungfraujoch is a train system beginning in Kleine Scheidigg that shuttles tourists up to a scientifc station in the saddle between the peaks of Monch and Jungfau. The station is at 3,500m (a little over 11,700 ft) above sea level. But to get there, the train takes a 10km (6.2 mi) tunnel bored through the solid rock of the Eiger. There are two brief stops on the ride, at which point travelers may get off the train to look at the view from windows quite literally chopped out of the face of the Eiger. The view is so vertiginous that barf bags are provided. 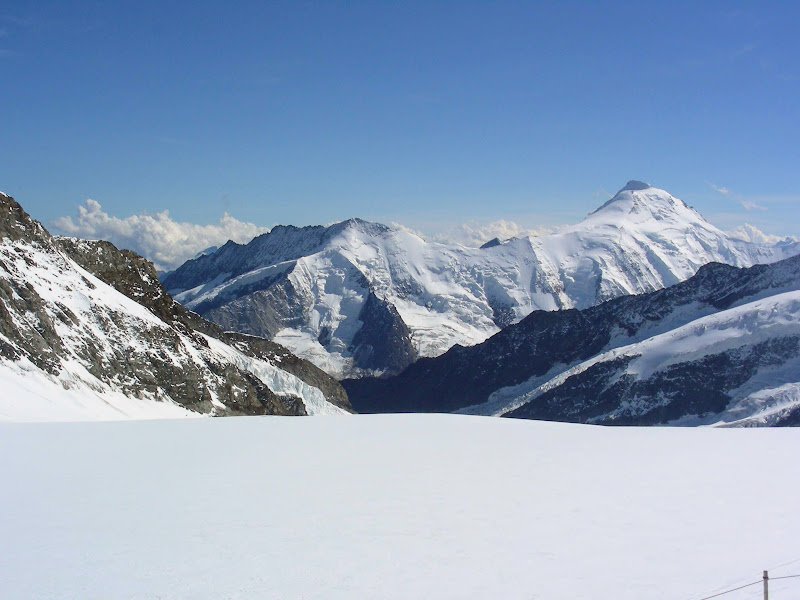 The view from the Jungfrau

We left Bern the next day and took a gorgeous drive through the Alps. Small villages and farms dotted the hillsides, and snowcapped peaks were visible in the distance. After a long day of driving, we reached our destination: Lake Lugano. Lake Lugano is an astoundingly beautiful lake set in the Italian region of Switzerland. We relaxed for a few days at Lake Lugano and explored several towns on its shores.

On our way out of Lugano, we stopped in the town of Bellinzona. Occupying an important strategic location in a narrow valley, Bellinzona was fortified with three castles, all of which are in excellent condition and open to tourists. We drove from Bellinzona to Leysin, in the Swiss-French region to drop my brother off at boarding school. After that, my parents and I took a train to Venice, Italy. 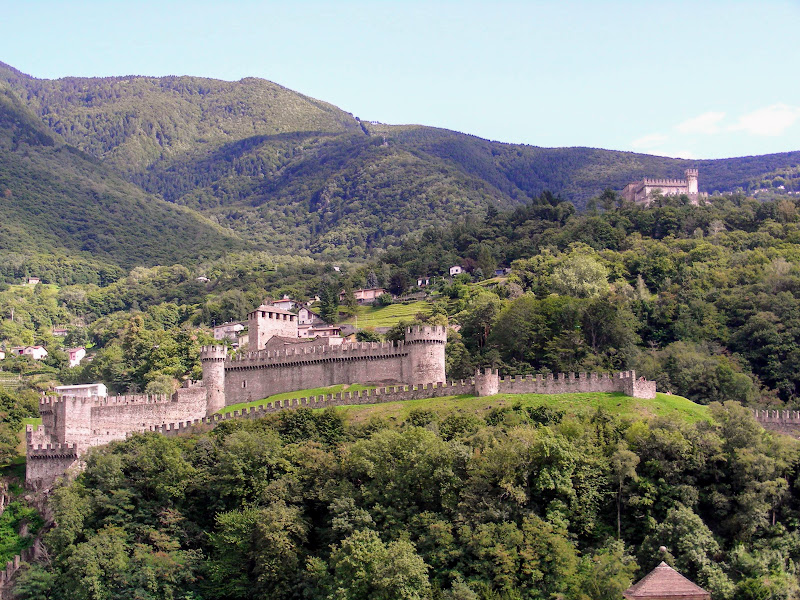 The castles of Bellinzona

From Venice, we took a bus to Cortina, an alpine town in Italy’s Dolomite Alps. The Cortina story, however, belongs in the climbing section. We spent three days in Venice touring this famous and historical city. We saw the normal tourist attractions: St. Mark’s (pictured above), the Doge’s Palace, the Rialto Bridge, and glassmaking on Murano. All these attractions were spectacular and more than met my expectations. Their beauty, history, and presence all combine to leave the viewer in awe. However, some of the lesser-known attractions were equally worthwhile.

In addition to the main attractions, we visited the Jewish ghetto and took an interesting tour of its three synagogues. We also stumbled upon a regatta (boat race) through the canals. One of my favorite sites was the Santa Maria della Salute, a church across the Grand Canal from St. Mark’s. Though all the sightseeing was incredible, simply exploring Venice’s narrow streets and canals is activity that is at once relaxing and invigorating. 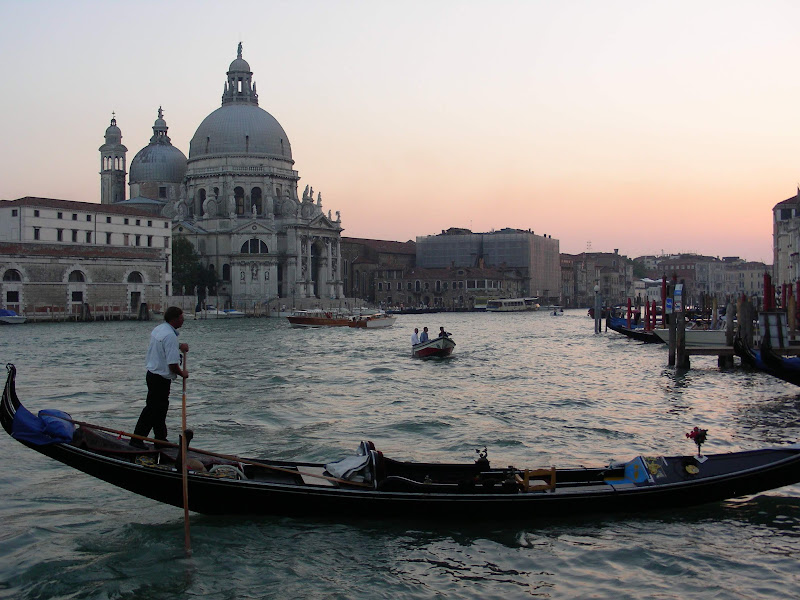 We spent three days in Venice. The morning of the fourth day, we took a water taxi to the international airport. We caught connecting flights in Munich and Chicago, then flew into San Francisco, ending a truly awesome trip.