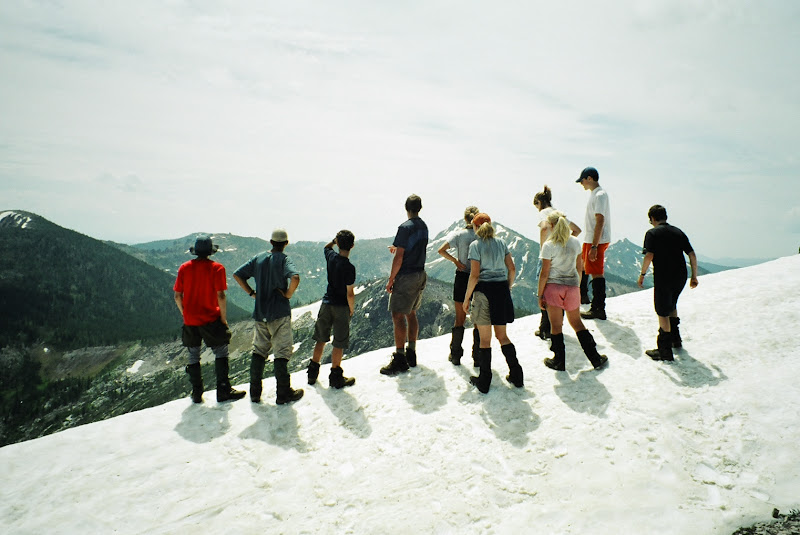 Straddling the Montana-Idaho border, the Bitterroots are a remote but spectacularly beautiful mountain range in the Northern Rockies. It was among these rugged peaks that Lewis and Clark crossed the Continental Divide in the early nineteenth century. The summer after my sophomore year in high school, I spent a month in Wyoming, Idaho, and Montana on a wilderness leadership training program. The trip included an unforgettable nine day, sixty-five mile backpacking trip across the Bitterroots, much of which would turn out to be off the trail. 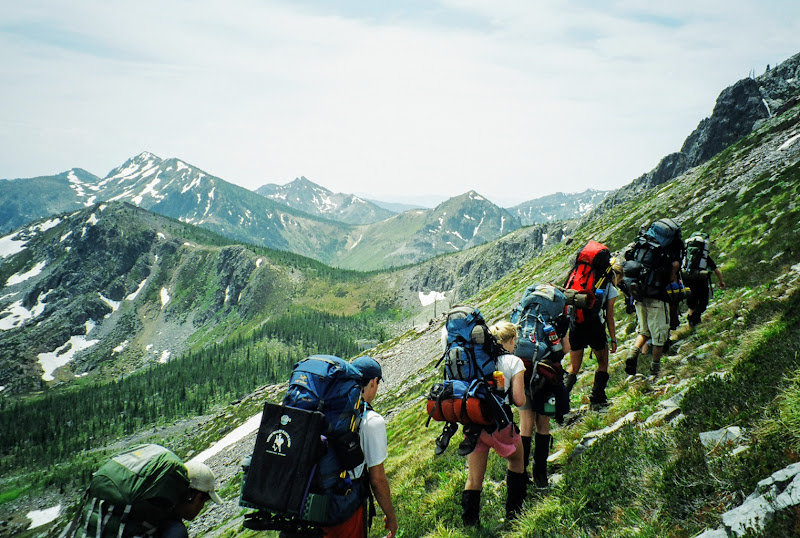 Hiking in the Bitterroots

We drove west from the town of Missoula, Montana to Hoodoo Pass, our entry point to the back country. I gave my teammates a brief lesson on using topo maps and compasses before we set out. The first day was about an eight mile hike with significant elevation change as the trail traced its way over and across the Bitterroots’ crenellations.

Our campsite that night was nestled in a copse perched on the edge of a small lake. As soon as we settled in, it became clear that Zach was not well. He only felt worse as the night went on, complaining of nausea, headache, and vomiting. The next day his flu still meant he was too weak to continue hiking, so we spent the day doing wilderness workshops, and a small group took a day hike to the top of a nearby ridge. 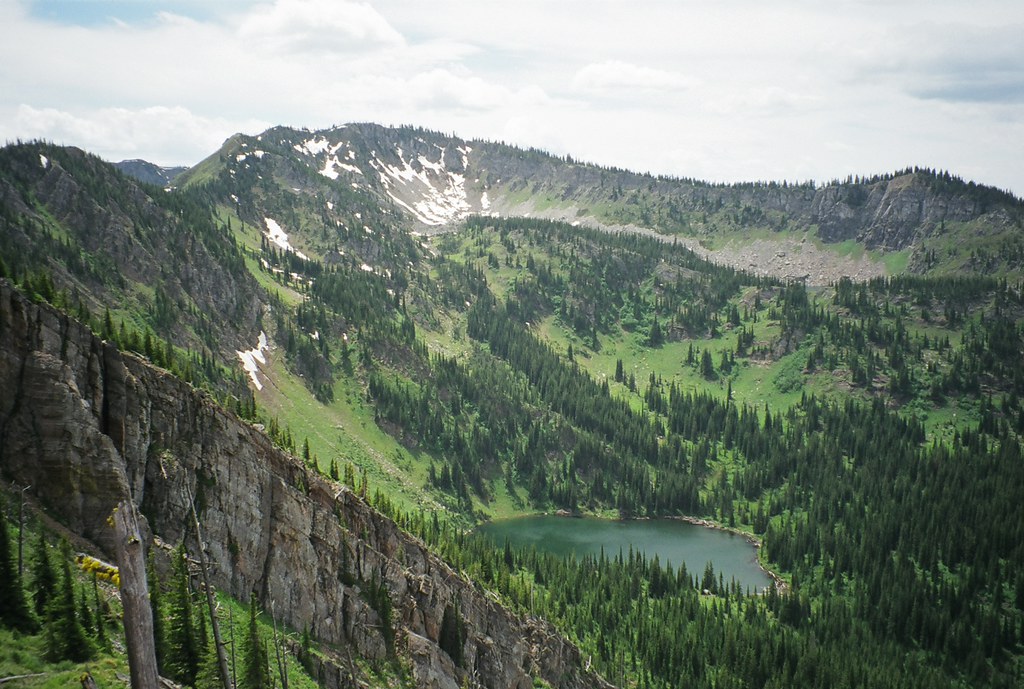 A lake near the Idaho border

In the morning, Zach was feeling a little stronger, but he was still very ill. So we split up his pack; each one of us took something, like a little food, a jacket, or part of a tent, and put in our own pack. With a significantly lighter pack, Zack was ready to continue, albeit at a slower pace than usual.

On this second day, the scenery was breathtaking. The trail followed an exposed ridge through the mountains. Looking down on either side, I could see lakes hidden behind distant ridges, countless peaks, and endless expanses of trees in every direction. There was not a single visible sign of human habitation. However, on a few of the peaks that the trail climbed we found heavy iron poles, two to three feet tall sticking out of the ground. On the tops of these poles, a line marked the Montana-Idaho border. 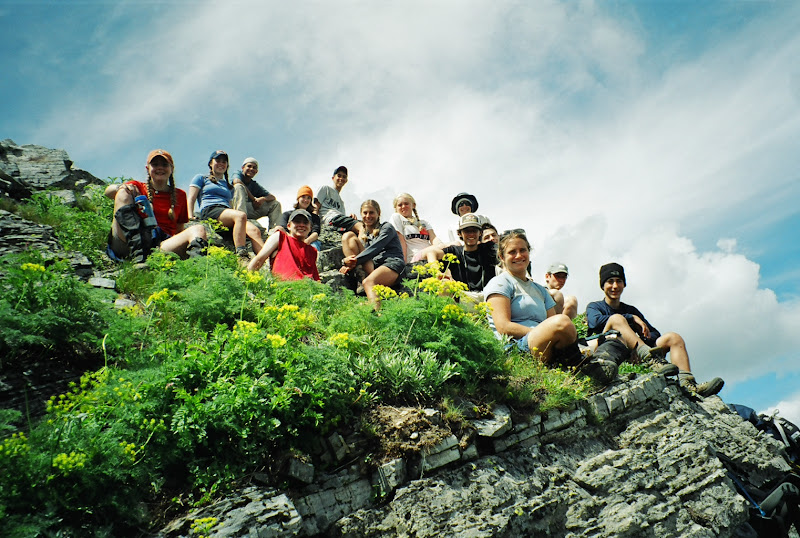 Group shot above the trail

When we made camp the second day, the sun was giving way to clouds. Unfortunately, most of the tent groups didn’t notice this ominous sign. Normally the storm that blew in that night would have been a nusiance, as it was fairly severe, though it shouldn’t have caused any serious problems. But our tents were Black Diamond Megamids, which our trip leaders had chosen to minimize weight. For the uninitiated, a Megamid is a pyramid-shaped sheet of nylon supported by a single pole in the center, similar to a circus tent. Unlike a conventional tent, the Megamid’s groundcloth is not the same piece of fabric as the rest of the tent. As a result, there’s a sizeable gap between the tarp you put on the ground and the rest of the tent. Most people’s Megamids flooded that night.

The next day passed uneventfully, if hiking through some of the country’s most beautiful scenery can be called uneventful. On day four, however, Addison sprained an ankle badly, and we were forced to spend another day without moving. We camped that night at Fish Lake, the last exit point on our route. After a day and night of rest, the injured ankle was in good enough condition to move on, but it meant we had to split up another pack. Shortly after leaving Fish Lake, we ran into a different sort of problem.

A few hours out of camp, we realized that the trail we were on was not marked on our map. We checked the dates at the bottom of the map and found they hadn’t been updated since 1984. After some consultation, we decided to turn off the trail, hike over the ridge to our left and down into the valley beneath it. The map showed a river running along the valley and another trail that paralleled the river. After the tiring hike up the steep ridge, we stopped for lunch and triangulated three nearby peaks to check our location. We were where we were supposed to be, so we prepared to continue down the other side of the ridge.

Since the far side of the ridge was even steeper than one we had just ascended, one of our leaders decided to roll his backpack down the hill rather than carry it. He lost two water bottles and busted a strap. When we managed to bushwhack down to the river, we found that the outdated map was wrong once again. There was no trail. We camped on the river bank and decided to keep a course along the river the following day to a junction where we knew there to be a trail.

After hiking about five miles in the morning, we stopped for lunch when we found the trail once more. Ironically, the route we’d planned took us off trail again at this point. We planned to hike a large loop over the ridges to a mountain called Rhodes Peak, the highest point in the area (known as the Great Burn after a huge forest fire decimated the region decades ago). We would only return to a trail the day before we hiked out. 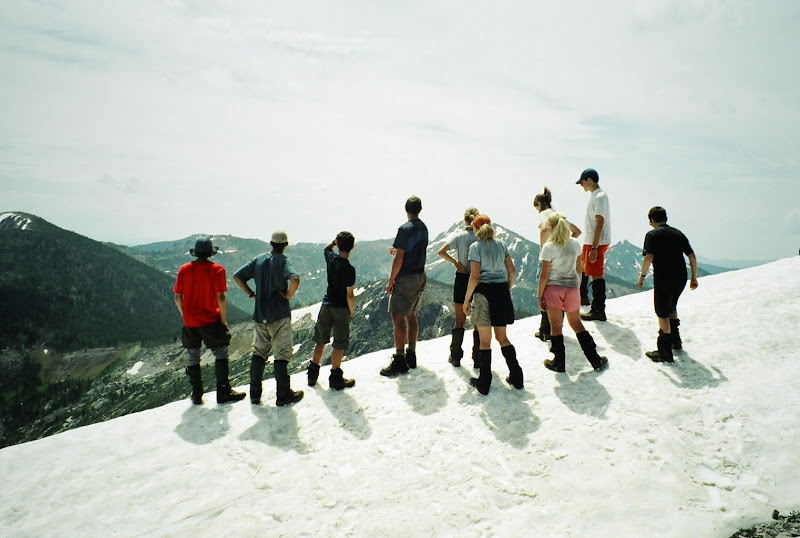 We turned off the trail and started climbing another ridge, this one beneath the aptly-named Shale Mountain. The slippery scree made progress difficult, especially with our heavy packs, but the view from the top of the ridge was astounding. We stopped on a snowbank to admire the scenery (pitcured above).

After another night camping away from the trail, we were prepared to start our assault on Rhodes Peak. Our route looped around the lesser peaks until we reached a ridge that ran up to the summit. Those of us who wanted to climb Rhodes dropped our packs and headed up. The hike was very easy, and we spent a few minutes taking pictures and hanging out on the summit before returning to the rest of the group. 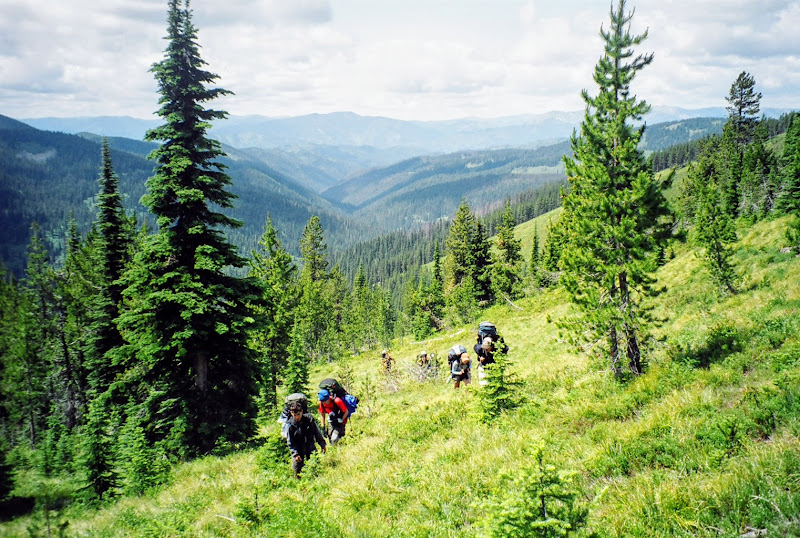 Our journey continued through this unbelievably beautiful country. We found a trail, and hiked along it past gorgeous lakes nestled beneath the mountains. We dropped beneath the treeline again, and the trail entered a dense forest.

On the second-to-last day of our trip, Liz (yes, the Liz that immortalized me in Seventeen magazine) became severely dehydrated. Our trip leader, Jed, took her pack, but it was clear she needed to get out of the back country. We decided to combine the last two days of our trip, turning an eight- or ten-mile day into a sixteen mile slog. The last several miles of the trail followed Kelly Creek. As we got closer to civilization, we spotted some flyfishers along the creekbed, the first people we’d seen since setting out.

We returned to our vans, which were parked along a two-lane highway running beneath the mountains. A few hundred yards up the river from us, a moose stepped out of the trees to drink in the river. The journey was over, but I will never forget the unparalleled natural beauty of the Bitterroots or the sense of independence and isolation that we all felt for those nine days.