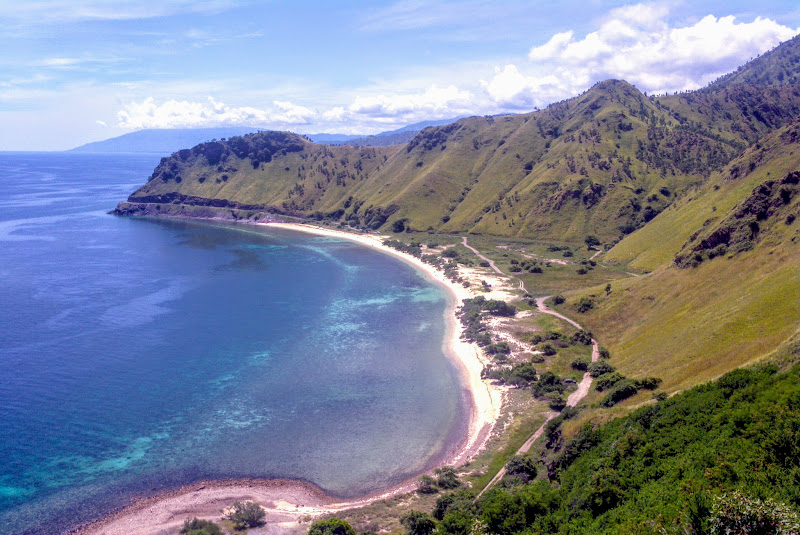 Timor-Leste is a tiny half-island nation at the southeastern tip of Indonesia, about 400 miles northwest of Darwin, Australia. In 1975, Timor-Leste declared independence from Portugal in 1975. Within eight days, Indonesia, which controls the western half of the island, invaded. Thus began a brutal quarter-century occupation and constant violent resistance that resulted in the deaths of at least 100,000 people before Timor-Leste was finally granted autonomy from Indonesia in 1999. For three years, Timor-Leste was governed by the United Nations. It became fully independent in 2002 and is still one of the world’s newest countries. 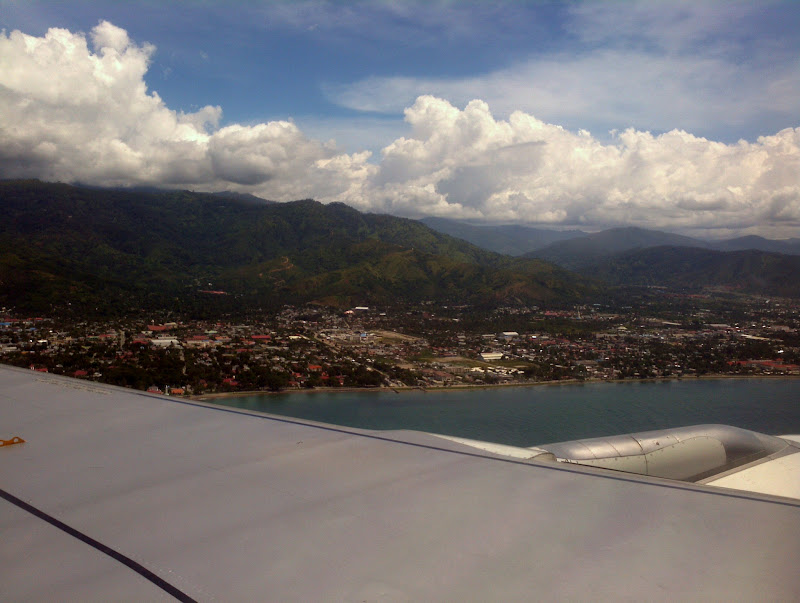 The Timor-Leste Legal Education Project is a program at Stanford Law School that produces textbooks on Timorese law. I joined the project at the end of my first year of law school. About a year later, after I’d written a textbook chapter on the legal history of Timor-Leste, I got the opportunity to visit the country with three of my fellow students. We left the U.S. in late march, shortly before spring break began.

It is not easy to reach Timor-Leste from abroad. Dili, the capital, has an international airport, but it has flights to and from only three other airports: Darwin, Australia; Denpasar, Indonesia; and Singapore. We flew from San Francisco to Hong Kong, and then from Hong Kong to Singapore. We arrived in Singapore on a Friday, but there are flights from Singapore to Dili only on Tuesdays, Thursdays, and Saturdays. So we spent a night in the Changi Airport transit hotel before embarking for Dili. 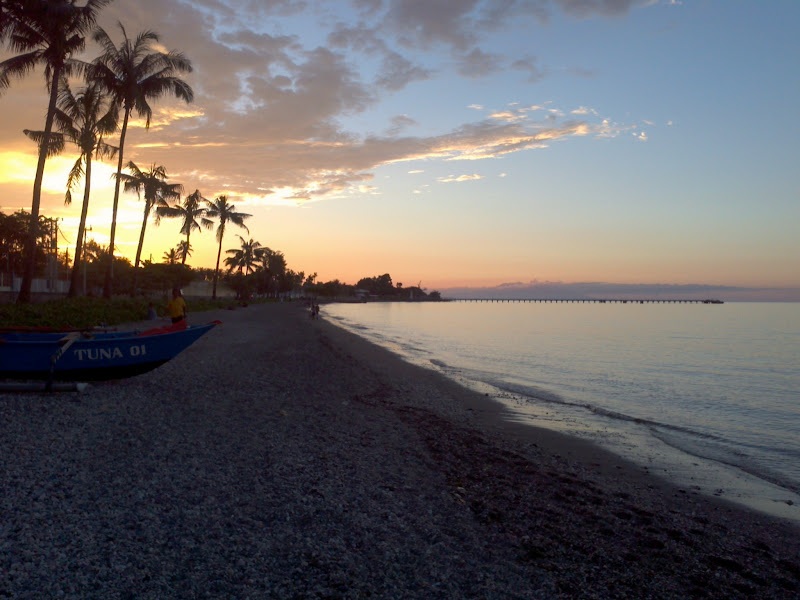 The beach in Dili

The flight from Singapore to Dili covers most of the Java Sea, a gorgeous tropical ocean dotted with islands of green trees and sandy beaches. I had never been to Asia before, and it was very exciting to see this part of the world. After about four hours, our plane touched down in Dili. Stepping out of the aircraft, we were greeted by a blast of warm, humid air. We deplaned and walked across the tarmac, onto a long covered pathway that greeted us with a sign reading, “Welcome to Timor-Leste.”

Geoff, a lawyer who worked with The Asia Foundation (our local partner), picked us up at the airport and drove us to our hotel. We checked into our rooms and gathered at the hotel restaurant, an open-air platform on the second floor with a thatched roof that overlooked the beach. In the distance was Atauro Island, a small island about 15 miles north of Dili. We didn’t get to visit it, but it’s supposed to be breathtakingly beautiful.

That afternoon we sat in the restaurant and ordered drinks. Because of Timor-Leste’s turbulent history and long UN occupation, Dili plays host to a significant international and ex-pat population—UN police, staff, and lots of NGO workers. As a result Dili essentially has two separate economies: one for locals and one for internationals and the very richest Timorese. Timor-Leste is the poorest country in Asia, but prices in Dili—at least for most things that Western visitors would buy—are unexpectedly high. It’s an uncomfortable situation, but the foreigners have accepted the fact that the dual track economy is really the only way for things to function until the country manages to get back on its feet.

Timor-Leste’s language politics are also remarkably complex. Almost everyone speaks Tetum, the local language. Tetum and Portuguese are the official languages, but only about 20% of the country is literate in Portuguese. This is a huge problem, because Tetum’s simplicity makes it impractical as a legal language. So Timor-Leste’s laws are written in Portuguese. This means that most people—and even most members of Parliament—cannot read the country’s laws. English and Bahasan Indonesian are the country’s “working” language. Bahasan is developed enough to serve as an official language, and more people are literate in Bahasan than Portuguese, but resentment towards the Indonesians and a strong Portuguese interest in the country prevent it from serving as one.

The next day was Sunday, and it was our one day off for the week. We took a cab out to Christo Rei de Dili. At almost 90 feet, it is one of the higher Christ statues in the world. Set atop a point overlooking some of Timor-Leste’s most beautiful beaches, it was initially criticized by many Timorese leaders as a tool of Indonesian propaganda. But now it has become one of Timor-Leste’s most famous landmarks.

After walking around the statue, we hiked over the eastern ridge behind Christo Rei. A trail led down to the ocean, and we followed it. Green hills and ridges sank down to a white sand beach that bordered a gorgeous blue ocean. It is one of the most beautiful beaches I have ever seen. 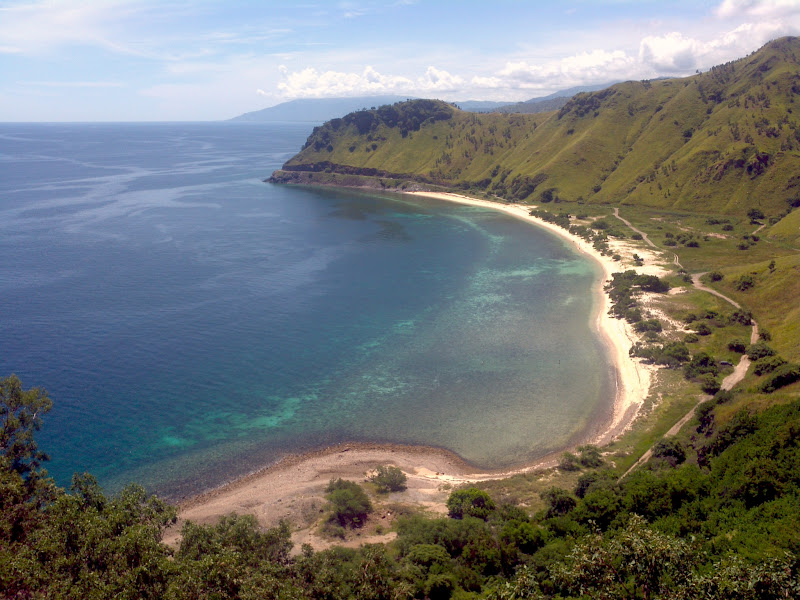 The beach beyond Christo Rei

Peter and I took a dip in the ocean, which was at least seventy-five degrees. We continued walking east, and each time we rounded a point, we found a beach that seemed to be more beautiful and secluded than the last. Finally, we turned around and hiked back over the ridge to Christo Rei.

Back at Christo Rei, we caught a cab back to Dili. There were four of us, which would normally have worked out fine, but our driver had a friend with him in the passenger seat and blasted music as he cruised back towards town, stopping frequently to flirt with women walking along the road. He also had no idea where our hotel was, even though it was one of the nicest ones in Dili. He didn’t speak a word of English. Somehow, we managed to direct him back to our hotel.

That afternoon, Geoff picked us up in his car and drove us west along the coast to an old Dutch fort. The fort had cannon mounted on its walls, and overlooked yet another spectacular beach. We explore the fort and then took a walk down the beach until it started to get dark. Then we returned to Dili. 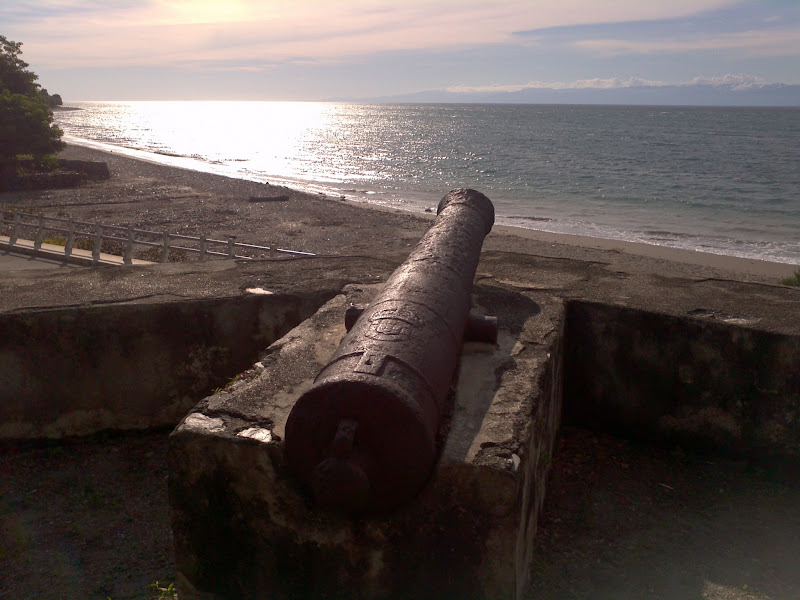 We spent the next week in meetings. We visited with Timorese government officials, lawyers, judges, and law students. We visited the American embassy and talked with the ambassador. Most nights we spent visiting the many Dili restaurants that cater to ex-pats, or swimming the hotel pool. We learned a lot about Timor-Leste and its legal system, but perhaps the most obvious aspect of Timorese society was the stark division between the ex-pat economy—which catered to UN staff, NGO workers, and the very wealthiest Timorese— and the rest of the country, which is Asia’s poorest nation.