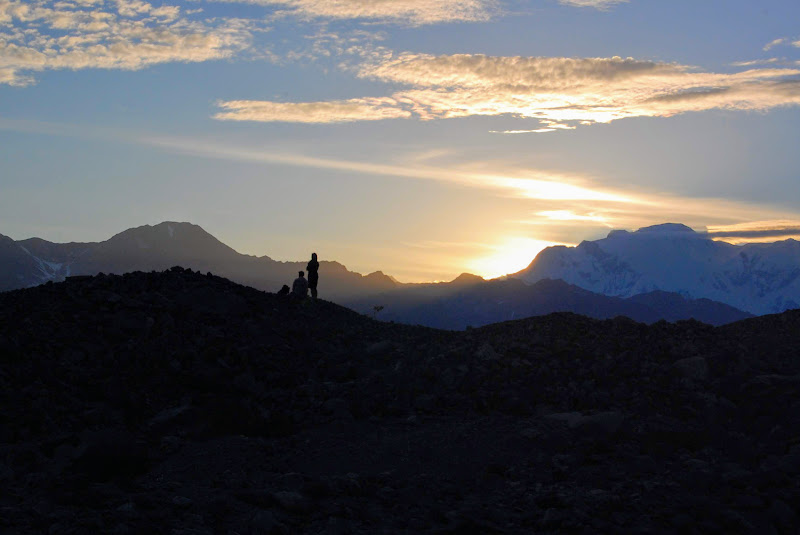 If you follow the archipelago of southeastern Alaska north to the Gulf, the first mountain range after the coast is the Chugach. Stay on the far eastern edge of Alaska and continue north forty miles. There lie the Wrangell Mountains, a stretch of peaks forged by ice and fire, carved by glaciers, forced upward by the crashing of tectonic plates, and scorched by volcanoes. In 1980, Wrangell – St. Elias National Park and Preserve was created. At 13 million acres, it is the largest national park in the United States, larger than nine U.S. states and seventy countries. The old copper mining towns of McCarthy and Kennecott lie at the center of the park. I spent two months during the summer of 2007 in a field study program for undergraduates based out of McCarthy.

I flew to Anchorage, about an eight or nine hour drive from McCarthy. On the summer solstice, I met with the rest of the people in the program, and together we began the long drive east across the state. The Alaska Highway is a beautiful drive that circles north through spruce forests around the Chugach Range. After about one hundred and fifty miles, we turned right onto Highway 4 and began driving south. Eventually, we passed through the town of Chitina, little more than a hotel, a gas station, and an airstrip, which is the last outpost of civilization before McCarthy.

The paved road also ends at Chitina, so even though it is only sixty miles west of McCarthy, the drive takes three to four hours. The long drive was worth it, though. It offered incredible views of the Wrangell Mountains, and we spotted a bald eagle and a beaver. Shortly after crossing the Kuskulana River, one of our cars got a flat tire. I continued on in the other car, but our alternator failed ten miles from McCarthy, stranding us along a flat stretch of gravel road. Fortunately, someone in town drove out to tow us to McCarthy, and we reached the Kennecott River, which bars access to McCarthy, ten hours after leaving Anchorage.

We took a footbridge across the Kennecott River and walked about half a mile to the Old Hardware Store, a mining-era edifice erected in 1911. It would be the center of our activities for the next seven weeks. A dinner of pizzas came out of the oven just as we walked in, and we enjoyed the hot pies before pitching our tents just outside town and falling asleep under the midnight sun. The Wrangell Mountains from McCarthy

The next week was intensively academic. Our instructors introduced us to the ecology, botany, geology, and natural and human histories of the area around us. The program emphasized combining art and science, so we were encouraged to write and sketch as we hiked to places around town, such as the toe of the Kennicott Glacier.

The Kennicott Glacier flows about thirty miles from 16,390-foot Mt. Blackburn to a point only half a mile north of McCarthy and 1,500 feet about sea level. It is the largest of the many glaciers flowing down the Kennicott Valley. To the east of the Kennicott Glacier, the other major glacier, the Root, flows down from the stairway icefall. The two glaciers meet south of 6,600-foot Donaho Peak, a massive melange of greenstone and limestone that rises abruptly in the center of the icefield. Me on the Root Glacier

After one week in the front country, we left for our first backpacking trip, which would last one week. The first day of the trip was a day hike on the Kennicott Glacier. It was our first time on the white ice, and my first experience traveling on a glacier. Walking on the ice was remarkably easy, and it was exciting to explore the meltwater streams that flowed across the surface. Even more intriguing were the crevasses and moulins (deep, circular holes that drained superglacial streams to the plumbing system beneath) that dotted the glacier. The next day we began hiking east from Kennecott up the Jumbo Mine Trail. Bulldozed in the 1950s during an attempt to reopen the mines, the trail was not designed for walking, and though it gains 2,700 feet in about three miles, there are very few switchbacks. Because the trail doggedly followed such a straight path up into the mountains, the hiking was strenuous, and we were all exhausted when we finally reached our campsite on the toe of the rock glacier that flowed out of Jumbo Cirque.

We spent three days exploring the area beneath Jumbo Cirque. I climbed a small peak above our campsite, which boasted a spectacular view of the Wrangells, the Kennicott Valley, and the Amazon Rock Glacier, one ridge north of our campsite. We also continued reading and studying the natural history of the Wrangell Mountains. A fairly light but tenacious storm blew in the day before we left Jumbo Cirque, tempering the hot weather that had dominated late June. We left Jumbo Cirque and hiked off-trail over ridges, down gorges, and across creeks to reach National Creek Pass, an alpine pass that looked out on the Kennicott Valley below. At National Creek Pass, we met Bill Morris, a professor of botany at Duke. He taught us about his research on moss campions and botany in general as we spent a few days hiking around National Creek Pass. National Creek Pass is about 5,000 feet above sea level, and during the storm that continued intermittently while we were there, the cloud ceiling often dropped below that elevation. Several times, we were engulfed in clouds, which cut visibility to only about forty feet. We left National Creek Pass and hiked southeast along the side of a hill and over a rock glacier. At one point, we saw a black bear prowling the willows on the hill below us. We’d seen three bears earlier on the trip, but never one this close. The bear became aware of us, but kept his distance and went on his way. We continued our bushwhack back down to Kennecott and the hiked the four miles back to our base camp in McCarthy.