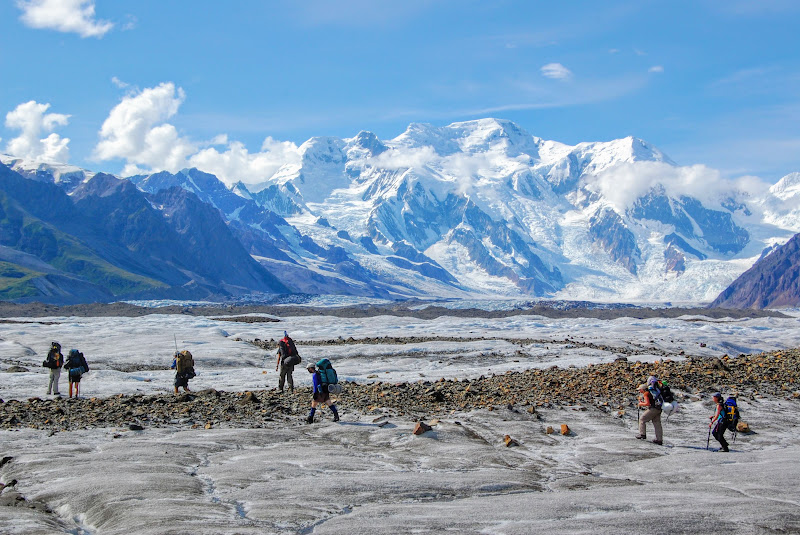 After the first two weeks of my trip to Alaska in the summer of 2007 (see Wrangell Mountains Part One for stories from those two weeks), I began designing my field study for the second segment of the program. Along with a group of three other students, I decided to study the issues involved in safe bear-human coexistence, including identifying bear habitat to help backcountry travelers avoid or at least be conscious of it, and researching methods for storing bear attractants in the backcountry. We spent about a week researching these topics and designing our field study. Then we embarked on an eighteen-day journey through the Wrangell Mountains. 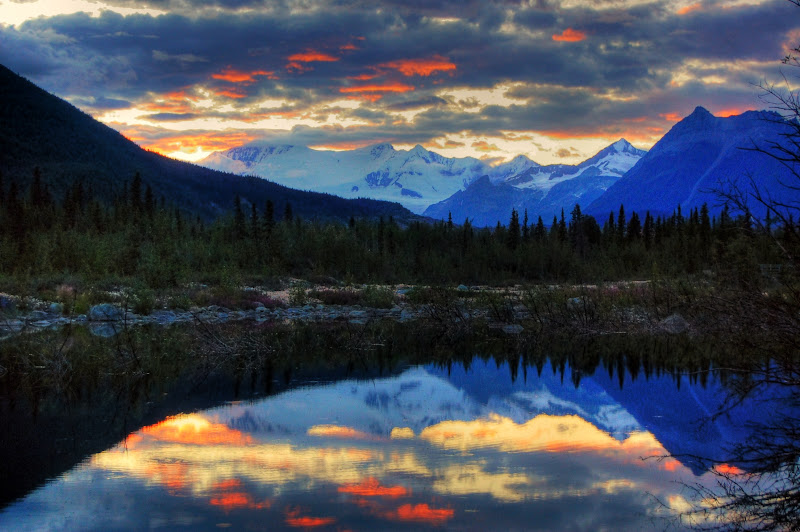 Leaving Kennicott late on the morning of July 14, we hiked to the white ice of the Root Glacier (near where I had recently tried ice climbing). We crossed the Root Glacier with crampons and then traversed two large moraines (tall, lateral deposits of glacial till) to the Kennicott Glacier. We set up camp on the ice and spent the night on the glacier.

The next morning, we hiked north along the Kennicott Glacier. After lunch we turned east and crossed onto the Gates Glacier, which we crossed quickly. The Gates Glacier is an eastern tributary of the Kennicott, and it marks the last ice before the solid land around Donaho Peak (known as the “toe” of Donaho). Upon reaching the toe of Donaho, we descended to a small lake near which the Park Service had installed a permanent bear box. We spent a few hours inventorying the campsite and sampling the vegetation for bear food. Then we put on our packs and kept walking to a larger lake about half a mile to the north where we spent the night. 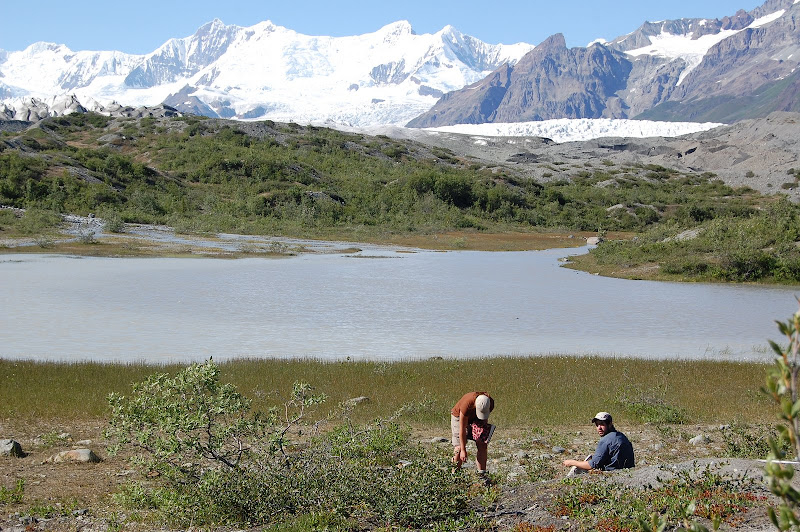 Running transects on the toe of Donaho

The day after we left the glacier dawned hot and sunny. We hiked up a steep, rolling ascent to final lateral moraine of the glacier on the side of Donaho. There we began a traverse to the north. Once we had passed the furthest western extension of Donaho Peak, we turned east to circle behind the mountain. Passing a small pond, we reached a gorgeous waterfall that tumbled down from a creek high above us. I led the bushwhack on very steep terrain through extremely dense, seven foot tall willows just north of the waterfall. It was a tough hike, but we finally reached an area known locally as “Bear Bowl,” an alpine meadow northwest of Donaho Peak.

The meadow sprawls spectacularly across the mountain, dotted with pink fireweed, purple monkshood, yellow arnicas, and white valerian. We set up camp in a flat part of the meadow and sat back to admire the incredible view of the Kennicott Glacier and the towering peaks at its origin. Exhausted from the tough hike to Bear Bowl, we cooked dinner and went to bed early. 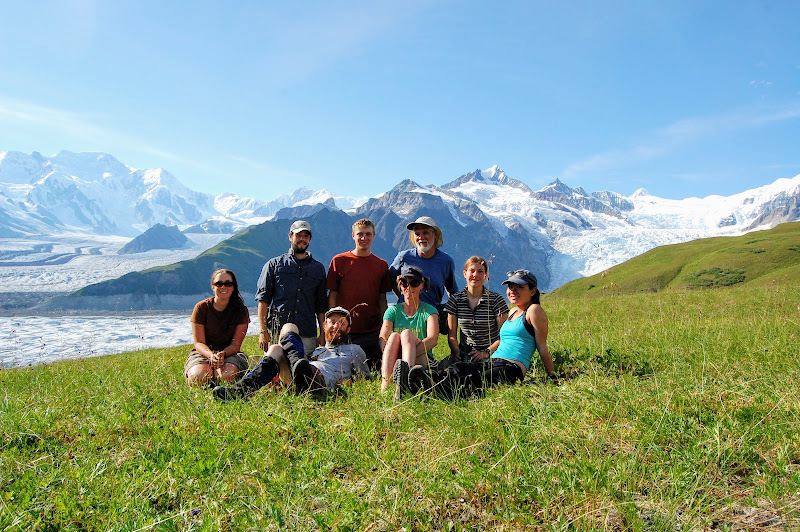 We spent one full day in Bear Bowl, day hiking, relaxing, and enjoying the area. Unfortunately, a storm system moved in that clouded the sky and cut down on visibility. By the next morning, however, the rain had mostly abated and, while the clouds had not disappeared, they had risen enough to restore most of the view we’d had when we arrived. We descended from Bear Bowl to a point about a mile north of where we had ascended and crossed the Gates Glacier with crampons. Continuing west, we crossed the medial moraine between the Gates and Kennicott Glaciers. That night we camped high on a medial moraine of the Kennicott Glacier.

In the morning we woke up early, even though we had only a mile to our destination for the day: an airstrip in the western fosse (the valley between the lateral moraine of a glacier and a mountain) of the Kennicott Glacier where we would be resupplied. The early start turned out to be necessary. After crossing the one medial moraine and a tongue of white ice, we reached another moraine. When we reached the top of it, it turned out to have a massive meltwater stream bisecting it with a tall ice wall on the far bank. We had to turn around and try to find a different crossing point. 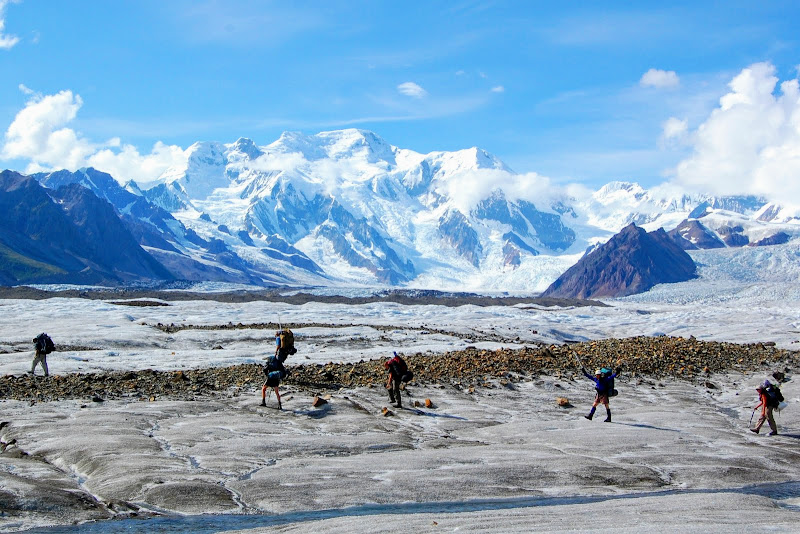 After searching for about five hours, we finally found a way to cross the moraine, involving a five foot vertical drop across the stream. Tired but exhilirated, we continued and reached the airstrip at about 7:30 that night. 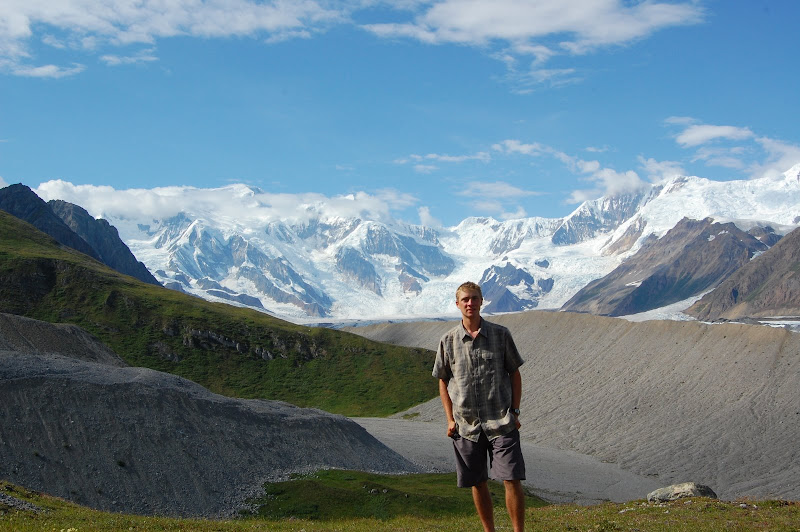 Me above Mellifluous Valley

We spent four days camped at the fosse working on our research. The fosse is a dry, rocky valley, and there was no water at our campsite. If you hike north from the airstrip about a mile and a half, though, the hillside to the west suddenly opens up into a green subalpine meadow with a tranquil creek running down it. Unofficially named “Mellifluous Valley,” the spot is a welcome break from the barren repetition of the rest of the fosse.

Finally, we broke camp at the airstrip and hiked south along the fosse. We hiked up to a knoll overlooking the entrance to Hidden Valley, a valley that rises to the west from the Kennicott Valley. Hidden Creek runs down Hidden Valley. Where the creek meets the Kennicott Glacier, the glacier dams the creek and a lake full of icebergs forms. Once each summer the glacial dam breaks and the lake floods out through the subglacial plumbing system. Known as a jökulhlaup, this glacial outburst flood sends about 30 million gallons of water tumbling down the valley and bursts the banks of the Kennicott River.

By some twist of fate, we had reached the knoll overlooking the lake just as the dam burst. As we watched, a massive iceberg in the middle of the lake cracked in half and crashed into the foamy depths, resurfacing several seconds later in a different part of the lake.

Continuing our hike, we descended an indistinct goat trail on the side of an extremely steep slope to reach the valley floor. We crossed the valley and made camp on the northern bank of Hidden Creek next to some icebergs beached by the retreating lake. That night we went to go watch the lake drain and the dazzling sights of the crashing and collapsing icebergs.

The next day we hiked about a mile west up the valley to another airstrip, which we reached by crossing the very swift (and freezing cold) Hidden Creek. We spent a few days camped at the airstrip, doing research and taking a day hike up Glacier Gulch, a spectacular area south of the airstrip. On the twelfth day out, we got our second resupply. The plane with our food flew twoards us, over our heads, and looped around past us. Then it looped around again, forming an awkward figure eight in order to get low enough to land. The Hidden Valley airstrip was very short when it was created, but a flood in October of 2006 wiped out part of the airstrip, making it even shorter.

As the pilot came in for a landing, his plane bounced along the rocky runway, his wings tipping wildly towards the ground on either side. His expression, however, remained totally unfazed.

The day after our resupply, we began hiking west up Hidden Valley. The hiking was beautiful but difficult. Most of the hiking was sidehilling on the sides of the valley, and several times we had to cross the creek’s fast and frigid waters. It took us all day to make the strenuous hike to the end of the valley, near the headwaters of Hidden Creek. We camped in a small meadow.

In the morning, the clouds had moved in, moistening our tents with mist and cutting visibility. Despite the weather, we decided to do a day hike south to an area known unofficially as “Oz”. We began hiking south up to the very end of the valley. We reached the top of the ridge and began dropping down. As we did so, the sky began to clear, giving us a clear view of the forboding silhouette of Castle Peak. 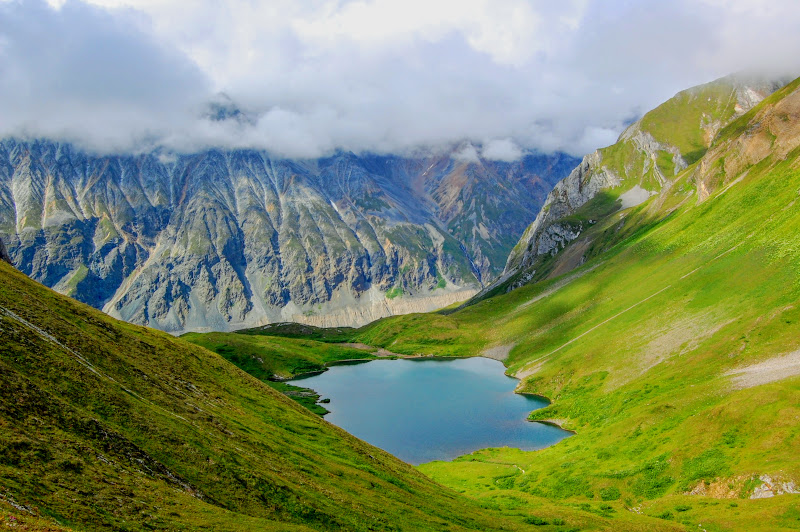 One of the Oz lakes

Oz turned out to be a huge, rolling meadow with spectacular blue-green lakes spread out among its green hills. We spent the day relaxing near the lakes and watching Dall sheep graze in impossibly high and steep parts of the mountains around us. In the afternoon, the clouds closed in again, and we returned to camp.

Oz marked the furthest point in the backcountry that our journey would reach; the rest of the trip was the return to Kennicott. We hiked back down Hidden Valley to find the lake completely drained. Returning over the knoll above the valley, we hiked back onto the glacier, south of where we crossed it the first time. On the way back, the crossing was much easier. It took us one hour rather than five to return to the soft, flat ice of the Kennicott Glacier. Hiking south along the glacier, we reached our campsite of the first night and spent our last night of the trip there. The next day we crossed the Root Glacier to the town of Kennecott and hiked the four miles south to McCarthy.

We spent the next week poring over the data we had collected in the back country and synthesizing our final project. After several days of hard work, we finally finished it, and celebrated by having a bonfire. Earlier in the trip, it had not really gotten dark at night; the sun barely set and it was light enough to read comfortably at any time of day. By early August, however, the sky was dark enough to see stars. The night of our bonfire was cloudy until about midnight, when the eastern sky suddenly cleared. As we watched, we noticed a few shooting stars, products of the Perseid meteor shower. Then the sky lit up in shimmering curtains of blue, green, and white. For about fifteen minutes we were mesmerized by the northern lights and the shooting stars zipping through them. None of us could have thought of a better way to end the trip.