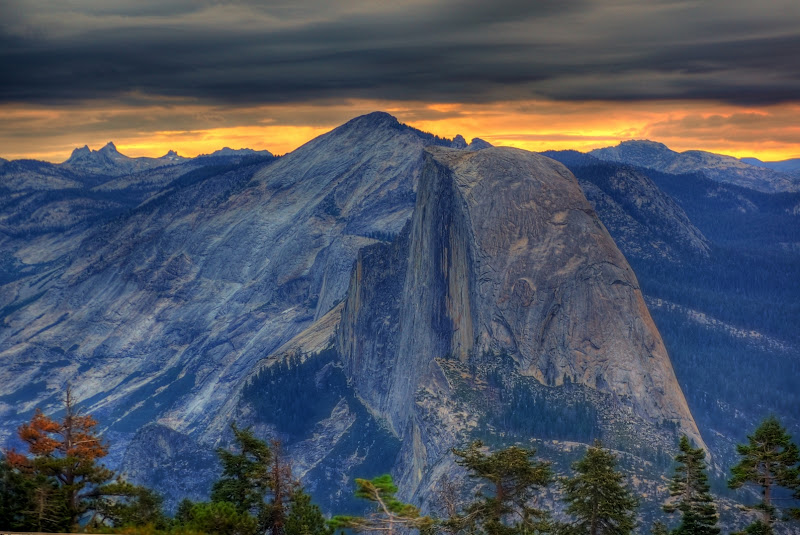 My first weekend off, I hiked the Yosemite Falls trail with Adrian, the other law student working with me. The hike, like most of the trails out of the valley, is not too long in terms of mileage, but it climbs a steeply for a few thousand feet over a relatively short distance. The view from the top of the falls is a beautiful lookout over the valley but doesn’t provide a very good angle of the falls themselves. However, a late and wet winter meant that the snowpack in the Sierra Nevada on June 1, 2011, was 300% of average. So the falls were booming and overflowing with water—far fuller than I’ve ever seen them. 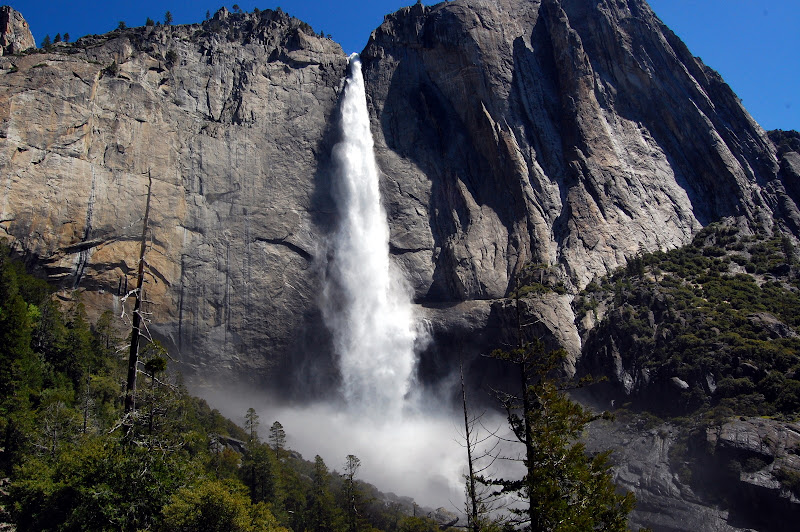 The next week, I spent a day driving around the valley with two rangers, a botanist, and a restoration ranger. They were both extremely knowledgeable about the park’s history and the various features of the valley. The late June day was overcast and rainy, a rarity for California summers. But the late summer storm refreshed the valley’s green grass and provided a beautiful background for Yosemite Falls. 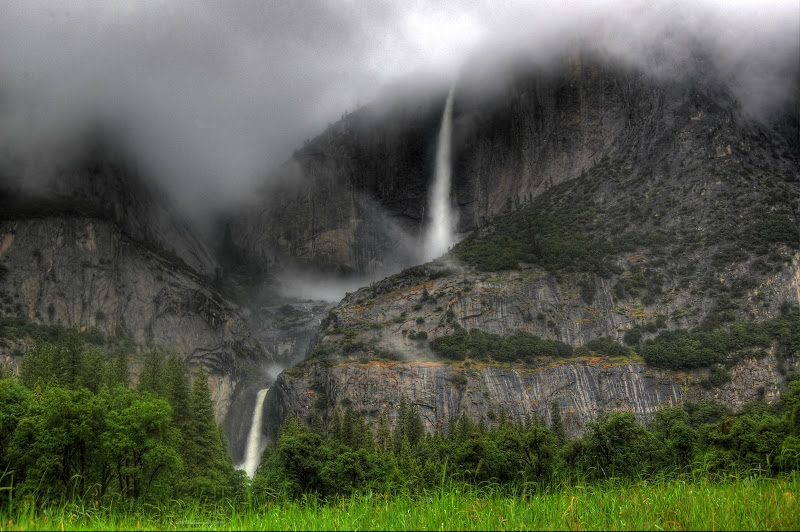 Yosemite Falls in a summer storm

One of the rangers also gave me a great tip: he suggested I hike up an old trail to Sierra Point. The trail used to be maintained, but a landslide in the 1980s wiped out most of the trail. It’s still pretty easy to follow, but it’s unmarked to discourage casual tourists. The trail is very steep, but it was almost deserted and the top boasts a spectacular view. From one point, you can see Yosemite Falls, Ilouette Fall, Vernal Fall, and Nevada Fall. The only problem with the gorgeous vantage point is that its panoramic view makes capturing the scene with a camera impossible. 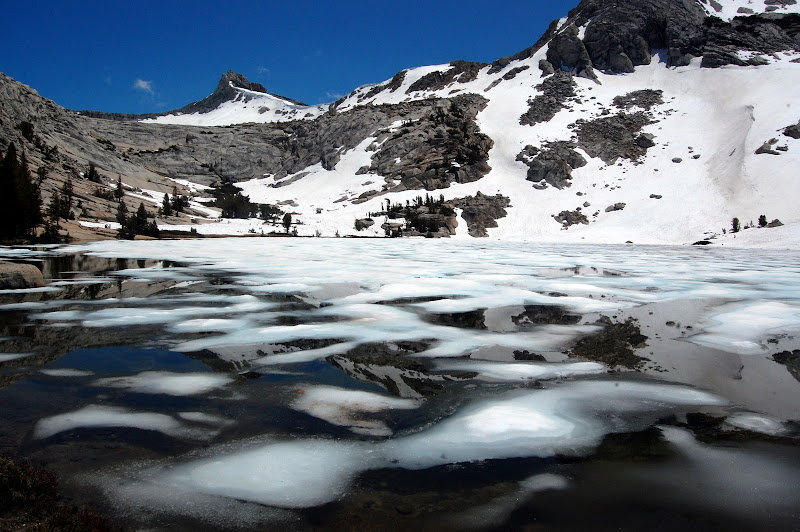 The Yosemite high country is some of the most beautiful mountain scenery in the world. I spent a few of my weekend days in the area above Tuolumne Meadows. The late winter and large snowpack meant there was still a lot of snow and water. My first weekend in Yosemite, the meadows were flooded, and the treed areas were still covered in a few feet of snow. A few weeks later, I returned. I did one of my favorite Yosemite hikes, out of Tuolumne Meadows up to Budd Lake, is a gorgeous lake below Cathedral Peak. This trip was particularly memorable because the path was covered in snow for the last third of the hike, and much of the lake was still frozen over. 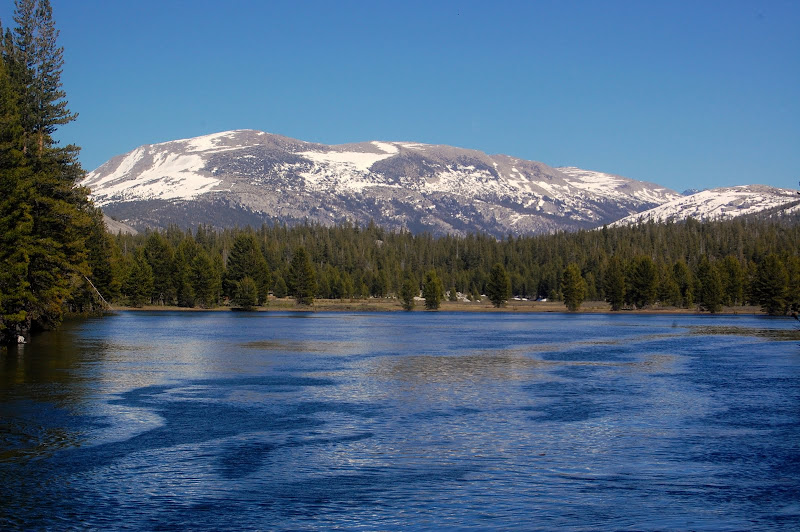 A little later in the summer, I climbed Mount Dana. Mount Dana rises 13,053 feet above sea level. Most people climb the mountain from the Tioga Pass entrance station. I used an alternate route, up Glacier Canyon. The route is a little shorter, a little steeper, and unmarked most of the way. I was recovering from knee surgery in March, but I managed the climb in under two an a half hours. After about twenty minutes on the summit, I could see clouds rolling from the southwest. I had descended to 11,000 feet when I felt the first drops of rain, but the storm didn’t really start until I was down to around 10,500. By the time I reached the bottom, it was a full-fledged summer thunderstorm. Fortunately my early start meant it was still before lunchtime. I headed east on Tioga Road to the Mobil Station to grab some food before returning to the valley.

I spent several of my evenings and weekends climbing. I’m not a very accomplished climber myself, but fortunately some of my ranger friends were very talented. We climbed in several of the more popular spots in the Valley, and a few that were a little more out of the way. We didn’t climb anything much more difficult than 5.9, but given the state of my knee injury, it was probably good that I didn’t stress it too much. 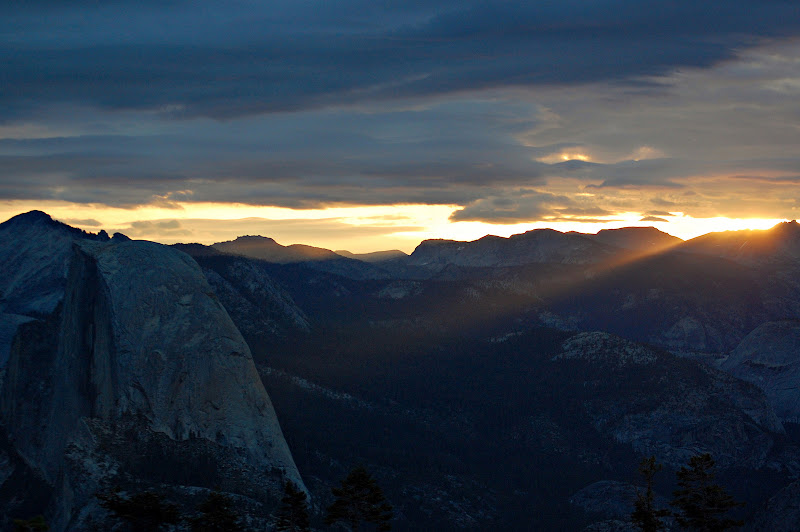 Sunrise behind Half Dome

My last day in Yosemite was one of my favorite. I got up very early with my friend Chelsea, and we drove out most of the way to Glacier Point. We parked and hike to Sentinel Dome, which probably boasts the most incredible view in the entire park. To the west, we could see a dramatic wildfire in the hills above El Portal. We watched the sun rise over Half Dome, one of the most spectacular sunrises I’ve ever seen. It was a perfect way to celebrate the end of one of the best summers of my life.