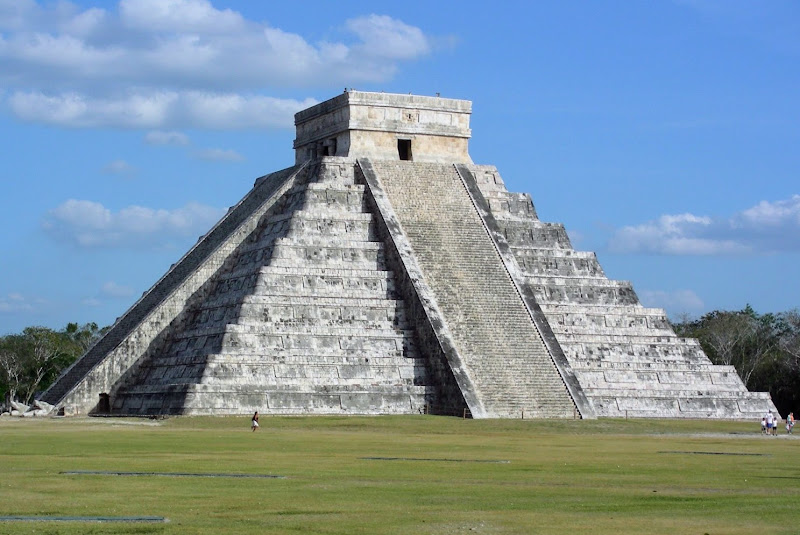 My flight landed in Cancun, Mexico a little before nine PM. A shuttle took my family to our hotel in Playa del Carmen, a beach town about 40 minutes south of Cancun. Perhaps slightly less blatantly commercial than Cancun or Cozumel, Playa del Carmen is still highly Americanized, and its main drag, “La Quinta Avenida”, has certainly inherited some of the materialism of its namesake. For the most part, though, we enjoyed our beach resort, the Shangri-La Caribe, and the ocean waters consistently warmer than seventy degrees. 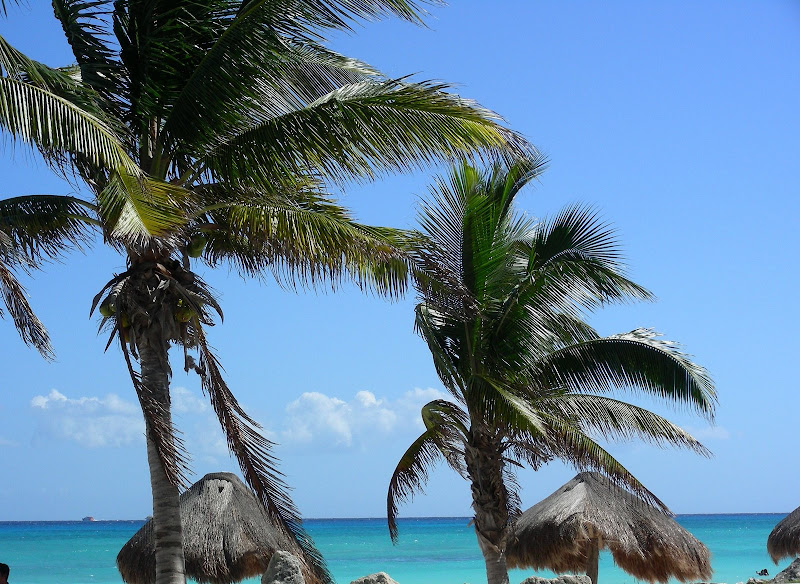 On the third day of our vacation, my dad, my brother, and I decided to go scuba diving near the hotel. None of us was certified, so we had to take a brief course in the morning and spend the entire dive with an instructor. The reefs off of the Yucatan Peninsula were heavily damaged in 2005 by Hurricane Wilma, and they have not yet recovered. But the warm, clear waters of the Caribbean provided an incredible view of the remaining ocean flora and fauna. We saw Moray Eels, parrot fish, giant snapper, and were able to swim through an underwater tunnel. After the dive, we returned to the hotel in an old speedboat with two outboard motors that spewed noxious fumes into the pristinely blue waters. 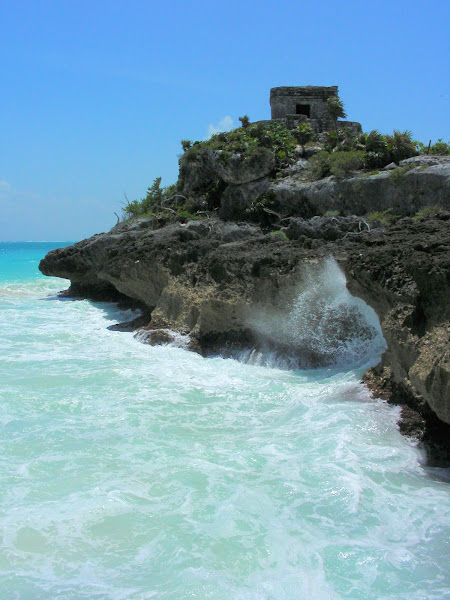 The Temple of the Winds at Tulum

The next day we spent visiting Mayan ruins. Our first stop was Tulum, a site dating to the period between 1200 and 1450 CE and one of the few major fortresses built on the ocean. An extremely knowledgeable representative from the Ministry of Tourism named Albaro guided us through the ruins. He showed us the various temples, meeting places, and military establishments in Tulum.

Set on cliffs above a small beach, the ruins of Tulum are situated in a breathtaking location. The main temple, a small pyramid that yet has a dominating presence, has its back above the cliffs, and the bright aquamarine ocean is a stone’s throw from its summit. The Temple of the Wind (pictured at right) is also on a hill above the ocean. A tiny but beautiful and well-preserved building, this tribute to the Mayan god of wind stands spectacularly silhouetted above the sea.

We left Tulum and drove inland to Coba, the site of more Mayan ruins. An ancient Maya city, the Coba is spread over a large area. We rented bikes to get around the ruins quickly, and visited one of the several ball courts on the site. It was a smaller ball court with slanting walls with intricate steles—inscribed stones—embedded in the walls. We continued down a path through the jungle to visit the crossroads temple, a tall round building built at the intersection of several important trade routes. After another short bike ride, we reached Nohoch Mul, the largest temple on the site, a step pyramid 140 feet tall (pictured at left). Nohoch Mul is one of the few major pyramids upon which tourists may still climb. We ascended the stairs to the top. As I looked out over the miles of jungle that stretched in every direction, I couldn’t help but imagine the incredible sense of accomplishment felt by the Mayan kings who had climbed the same steps so many centuries ago. 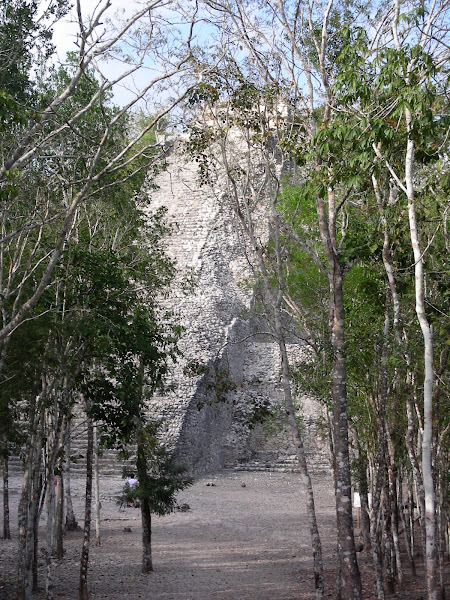 The pyramid at Coba

Throughout the Yucatan, the region’s omnipresent limestone forms cenotes, freshwater-filled sinkholes. Many of these form networks of subterranean caverns that extend for miles below the surface of the earth. We visited Tak Be Ha cenote (pictured at right), a maze of stalactites and blue-green waters. The water was surprisingly warm and refreshing. 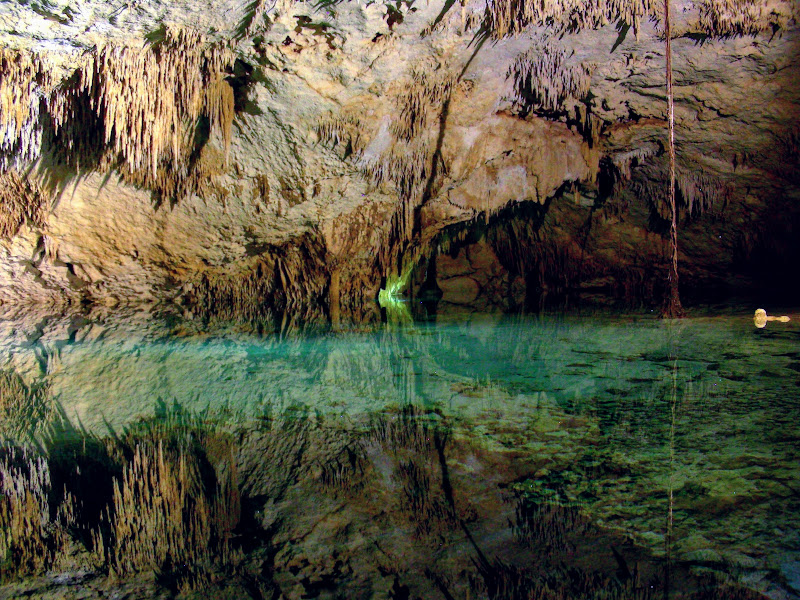 We snorkeled through the cenote, exploring the various rooms and passageways of the caverns. Small fish inhabited the cenote, but apart from that it seemed devoid of life. Our guide Jimmy (he was known as “Fifty Per Cent Jimmy” after the ratio of tourists with which he tended to return) swam in front of us and took us through the narrow, cramped passages of Tak Be Ha. Often the stalactites would be only a few inches above our heads.

After spending another day relaxing on the beaches of Playa del Carmen, we drove to Chichen Itza, one of the most famous ruins of Mesoamerica. The site is dominated by El Castillo (pictured at left), perhaps the best known ancient American ruin. Eighty feet tall, El Castillo is a massive calendar. Each of the four sides has ninety-one steps—thus if you count the top platform El Castillo has 365 steps, one for each day of the year. 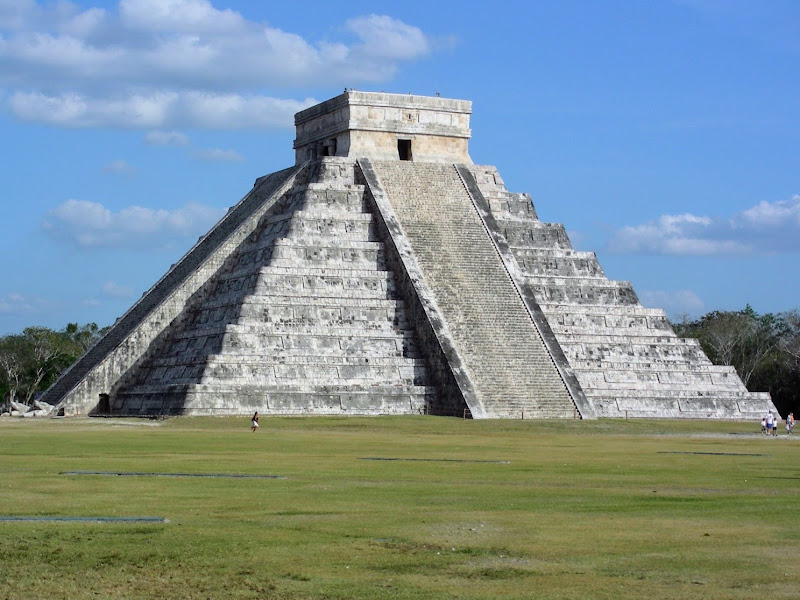 Most remarkable, however, at the spring and fall equinoxes, the steps of the pyramid cast a shadow on the north staircase that resembles Quetzalcoatl, the plumed serpent. We missed the spring equinox by about a week, so we didn’t see this dazzling effect. However, the Ministry of Tourism holds a light show every night to recreate the effect. 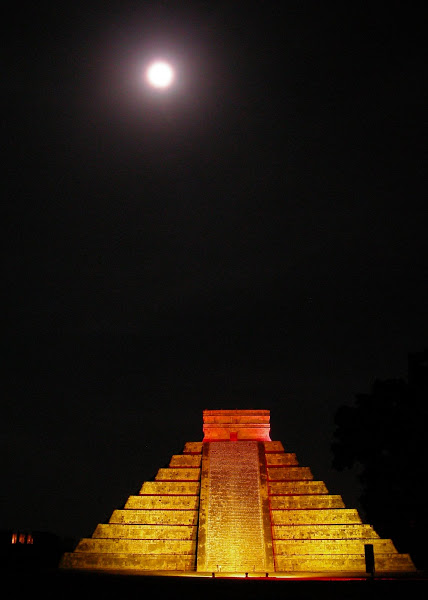 Chichen Itza under the full moon

We also visited the other major sites at Chichen Itza, including the incredible observatory (for pictures, see the photo album), a general’s house, and the tomb of the high priest. The ancient ruins of Chichen Itza are one of the most dramatic and dazzling sights I have ever seen. We returned to our hotel, the Hacienda Chichen, and spent a relaxing night there before flying out the next day.