2017 is the year of the bezel-less smartphone. Ever since the LG Prada was released in May 2007, capacitive touchscreens have become the dominant smartphone interface. Apple popularized them with the original iPhone, and now they’re ubiquitous. But the touchscreen has typically been borderd by unsightly bezels. That started to change this year.

Well, it really started last year. Chinese manufacturer Xiaomi launched the Mi Mix in November 2016. It was hard to get in the United States, but pretty much everyone thought it was beautiful, and a stunning innovation in the stale slab-like smartphone design that’s been essentially unchanged since 2007.

The Mi Mix might have been a breath of fresh air, but the front camera placement was awkward. While the top of the screen curves beautifully into the top corners of the device, the phone has a noticeable chin at the bottom where the front camera is placed. And that’s the fundamental problem with the bezel-less design: you have to put a bunch of stuff on the front of the phone—camera, speaker, microphone, proximity sensor, etc.—so it’s currently impossible to make a phone that is all screen. That hasn’t stopped several manufacturers from trying. They’ve taken a number of different approaches to fitting all that stuff on the front of the phone while maximizing the area covered by the screen.

LG kicked things off in 2017 with the LG G6 in February. It’s a good-looking phone with slimmer top and bottom bezels than most phones, but those bezels still have plenty of room to house all the necessities. The design is more iterative than innovative; the G6 doesn’t look strikingly different from most modern smartphones.

Samsung was next with the Galaxy S8 and S8 Plus. The phones followed the same approach as the G6: shrink the bezels down as small as you can, while keeping a rectangular screen. The Samsung phones have a sleeker, more futuristic design than the G6, and they improve the screen-to-body ratio from about 79% to about 84%. But the idea is still fundamentally the same: keep the basic capactive touchscreen smartphone design, just make the bezels really small.

The first phone—other than the Mi Mix—to really depart from the bezel design was the Essential PH-1, which shipped in August. Essential is a new company, founded by Android co-founder Andy Rubin. The Essential PH-1 was the company’s first device, and its design raised eyebrows throughout the Android universe. Like the Mi Mix, the PH-1’s screen melds beautifully into the top of the frame. Unlike Xaomi, Essential didn’t move the front-facing camera to the bottom. Instead, Essential pioneered the “notch” approach to bezel-less smartphone design: let the camera intrude into the screen, and curve the screen around the camera. The PH-1 also has a chin at the bottom where other front-facing necessities reside. 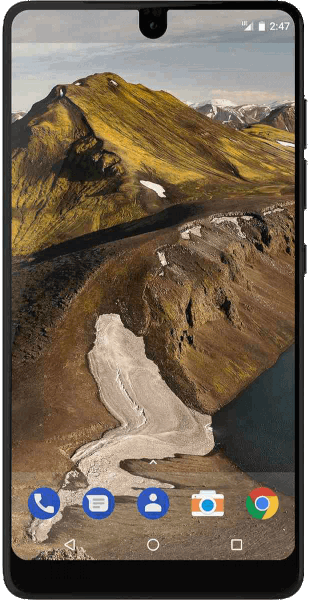 Apple joined the party when it announced the iPhone X in September, to ship in November. The iPhone follows the same strategy as the PH-1: make the screen flow around the front camera. Apple has a much bigger notch than Essential, probably because the notch houses a number of sensors that the Essential PH-1 doesn’t place there: ambient light, TouchID sensors, speaker, and microphone. But because it has a much larger notch, Apple manages to do away with the chin.

Apple, of course, got the most attention. When silhouettes of the iPhone X leaked, revealing the prominent notch, people immediately began speculating as to how Apple would handle it. Videos are rectangles. Photos are rectangles. Games are rectangles. So how would the software handle rectangular interfaces when the screen was no longer rectangular? Apple embraced it, showing demos of photos and videos during the iPhone X unveiling with the notch intruding into the content. 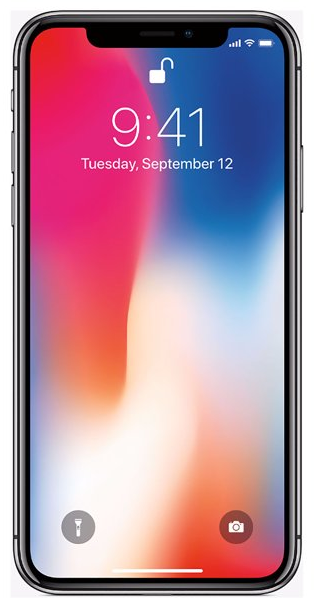 Some called this “courageous” and implied that it was a bold move on Apple’s part, instead of simply embracing the reality that it’s currently impossible to engineer a phone that has sensors and cameras on the front without taking some space away from the screen. Others, like John Gruber, were more realistic, pointing out that courageous doesn’t necessarily mean good and suggesting that software might begin to simply render content in the rectangle created if you ignore the “ears” that protude to the left and right of the notch. Some were flat-out critical.

I think calling the move “bold” or “courageous” is silly. The bottom line is that if there had been any way for Apple’s designers engineers to make a phone with all the necessary sensors but no notch, they undoubtedly would have done so.

A couple of Android developers are poking fun at all this “embracing the notch” silliness. They’ve created apps to add a notch to your Android device. These apps just render a black bar roughly the shape and size of the iPhone X notch at the top center of your screen, making that part of the screen unusable.

That way those of us who don’t have the latest and greatest phones—like me with my venerable Nexus 6P—can join the 2017 bezel-less smartphone revolution.