"The Ten Thousand Doors of January" by Alix E. Harrow 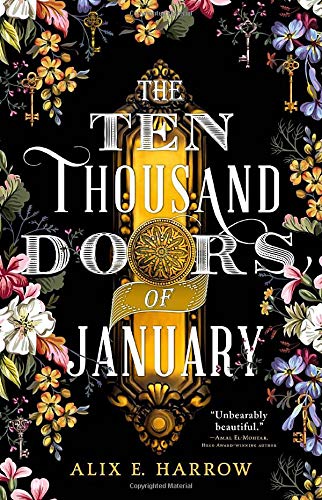 Alix E. Harrow’s debut novel is a magical journey through fantastical worlds. January is the ward of the wealthy collector Cornelius Locke. She’s raised in Locke’s mansion, which is stuffed with rare treasures from every corner of this world (and others). January’s father is mostly absent; he’s usually off seeking new artifacts to add to Locke’s hoard. She never knew her mother.

As the book unfolds, we learn the stories of January’s parents. And January discovers Doors, portals to other worlds that permit the strange, the unexpected, the wonderful, and the terrible to pass between. They’re a nod to the likes of C.S. Lewis and Philip Pullman, and the homage is very well done.

I really enjoyed this book. It’s a compelling read, and Harrow’s depictions of love and loss are particularly heartfelt. I also enjoyed the pacing and structure, which alternates between January’s perspective and a book within a book written by someone else. And though the ending won’t satisfy everyone, I loved it.

I wonder sometimes how much evil is permitted to run unchecked simply because it would be rude to interrupt it.

There were a few things I didn’t like. There’s not much character development, or even characterization. January is by far the best-developed character, but by the end of the book we’re led to believe that her most important transformation might not actually be a result of character development at all. The commentary on race relations is awkward and contrived from the beginning, and it becomes even more so once we understand the origins of the main characters. And while the concept of Doors is fascinating and imaginative, we get only brief glimpses into most of the many worlds to which those doors connect (the book is plenty long, so I’m not saying that we needed to spend more time in these worlds, but I still found this frustrating).

Finally, a word on the magic. I tend to place fantasy novels on a spectrum from J.R.R. Tolkien, where the magic is almost incidental and largely unexplained, to Brandon Sanderson, who develops rich magic systems with detailed rules. Both can be done well or poorly; unexplained magic can provide a mystical backdrop or be confusing and distracting, while detailed magic systems can be tantalizing and interesting or so bogged down with regulation that they distract from everything else. Harrow is much closer to Tolkien than Sanderson, and for the most part I thought her execution was good. But there were several moments where I wished the magic system was just a little more defined so that the reader could better understand the limitations on what the characters could do.

But these criticisms are mostly minor. This was a fun read, and I definitely recommend it.