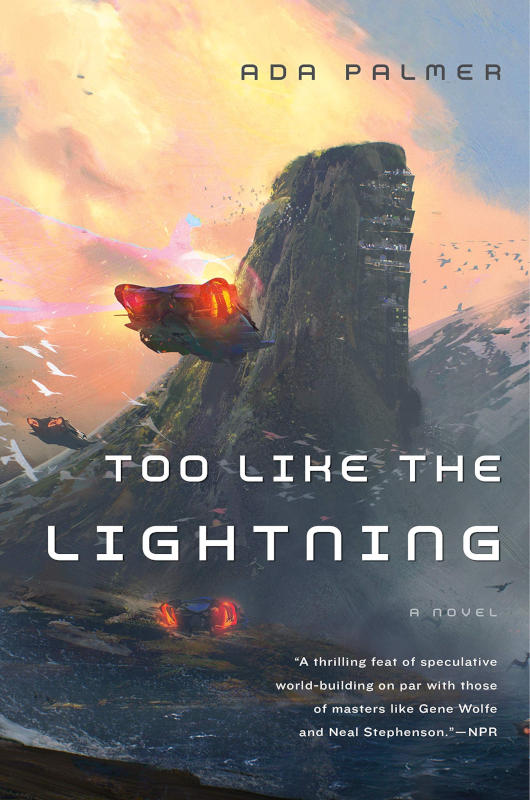 This book was interesting. “Interesting” can be used to mean a lot of things, and frequently to dissemble. But in this case I mean it simply—it was an interesting book because Palmer creates a fascinating world that the novel spends most of its time exploring. The book is also unflinchingly pretentious, very well-written, and quite slow. It’s often described as political science fiction, because the futuristic setting is mostly a vessel to explore how society and politics have changed.

To appreciate Too Like the Lightning you need to know a little about the author. Ada Palmer is an hisotrian specializing in the Renaissance. The novel is set in 2454, about as far in the future from now as the Renaissance is in the past. It’s chock-full of allusions to Renaissance thinkers, writings, and ideas.

The most important technological development in 2454 is a fleet of flying cars that can transport people from any point on the planet to any other in a few hours. Consequently, people can live wherever they like. The present day notion of a nation-state is obsolete; while so-called “nation strats” still have residual influences, “hives,” non-geographical entities with voluntary membership, are the primary political entities. There are a few universal laws that apply to everyone, and then each hive has its own government and legal system. As a result of devastating religious wars in the 22nd century, religion is mostly outlawed.

Family life has changed, too. Because people can live anywhere in the world, they form bash’es with their best friends, or others who share their interests and community. Much of what happens in Too Like the Lightning takes place in the Saneer-Weeksbooth bash’, the bash’ that controls the worldwide flying car transport system.

Too Like the Lightning follows two main characters: Mycroft Canner and Carlyle Foster. Mycroft is a servicer, a paroled criminal required to provide help to whoever might need it. Carlyle is a sensayer, a spiritual guide that’s replaced religious leaders of all kinds. There are two primary plots: the first involves Mycroft and Carlyle’s discovery of a young boy who has the power to bring to life inanimate objects, a development that threatens the entire world’s spiritual and religious ecosystem. The second involves the theft of an important document and its being planted in the Saneer-Weeeksboth bash'.

While there’s some exploration of these storylines, most of the book is a deep dive into the rich world that Palmer creates. And as a feat of worldbuilding, the novel is outstanding. There’s little characterization outside of Mycroft, however. And not much action, or even development of the two main plots; most of the payoff occurs in the subsequent novels of the Terra Ignota series. There’s also an overwhelming amount of allusion and pedantry, to the point that Mycroft at one point spends several paragraphs explaining Les Miserables.

The key to Too Like the Lightning is patience. If you’re willing to put up with the crawling plot and conceit, you’ll be rewarded with an incredibly complex world to explore. It was worth it to me, and I plan to keep reading the series, which continues in book two, Seven Surrenders.

Previous Snap Apps Crash Silently Due to Cross-Filesystem...
Next "The City We Became" by N. K. Jemisin