"The City We Became" by N. K. Jemisin 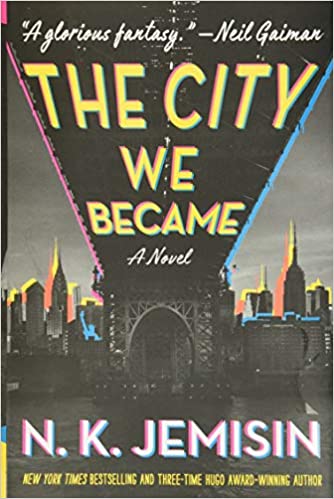 The City We Became was a huge disappointment. N. K. Jemisin is a fantastic writer—I loved her Broken Earth Trilogy, and I’m looking forward to reading her Inheritance Trilogy. But The City We Became, the first installment in her new Great Cities urban fantasy series, was just bad. It’s boring, not much happens, and the characters are bland and monotonous.

The novel’s basic premise has some promise. The fundamental idea is that to become truly alive, cities must manifest in the form of human beings. We join New York in the present day, shortly before this transformation, and so the main characters are avatars representing the five boroughs and the “primary avatar,” who represents the city as a whole.

But the awakening of a city can go horribly wrong (New Orleans is cited as an example), and our protagonists struggle against a powerful enemy: a strange, unfamiliar city from an alternate universe. It’s explained, albeit vaguely and poorly, that the awakening of a city in our universe results in the destruction of cities in other universes. The characters briefly acknowledge, then completely brush aside, the moral implications here. It seems like they should have spent at least a little time wreslting with the quandary that their own success requires ruining the lives of countless denizens of the multiverse.

Anyway, the enemy—this strange city from another universe—has a plan to prevent New York’s manifestation. Unfortunately that plan will result in the destruction not just of New York, but of our entire universe. Why this is the case is never adequately elaborated.

Our heroes have special powers, but what those powers are, how they’re used, and what their limits are isn’t really explained, either. They can expel others, including the enemy, from their boroughs, and they can manipulate people to some extent. These powers are particularly potent in their own boroughs, but that’s about all we learn. This extreme underdevelopment of the concept of city manifestation is not only unsatisfying, but it severely hinders the coalescence of a coherent plot.

The characterization is also thin and unsatisfying. The avatars are a diverse mix of races, genders, and sexual orientations. But apart from these external characteristics—which are almost always described through the characters’ thoughts or dialogue, rather than shown through events and actions—we learn very little about them. And apart from superficial differences, there’s little to distinguish the characters. A great example is the Manhattan avatar’s roommate. In his introductory scene, we learn that he’s British and a Ph.D. student, and he mentions briefly that he’s transitioning from female to male (the only trans or gender fluid character in the novel). Then he’s in one more scene that does nothing to develop his character further, and we never see him again.

And then there’s the politics. I like books that are political, and when political messages are expressed powerfully in the science fiction/fantasy genres, I’m all the more impressed. The City We Became blatantly attempts to be political, but message is neither challenging, controversial, nor nuanced. Apart from the notions that racism, homophobia, and xenophobia are bad, there’s not much to the book’s moral import. But the book even takes its own simple message for granted—rather than present that message in a compelling way, it simply tells us these things and we’re supposed to agree. That’s it. The City We Became doesn’t present these ideas in a new or challenging light. It doesn’t provide insight into how racism, homophobia, or xenophobia have affected people’s lives. It just tells us they’re bad, over and over and over again.

The utter failure of the politics is tied into the weak characterization. The novel beats us over the head with the characters’ races, genders, and orientations, almost always by reminding us through the characters’ own words or those of the third person narrator. There are nebulous allusions that these traits have made the characters’ lives hard and left scars, but we never see that or feel it. Rather than show us how systemic racism or inhumane immigration policies have affected her characters, Jemisin simply has one of them tell us that ICE is bad.

I won’t be continuing the Great Cities series. It was hard enough to force myself to finish this book. But I still think Jemisin is an excellent novelist (seriously, if you haven’t read the Broken Earth Trilogy, go read it now) and I can’t wait to explore her other writing.