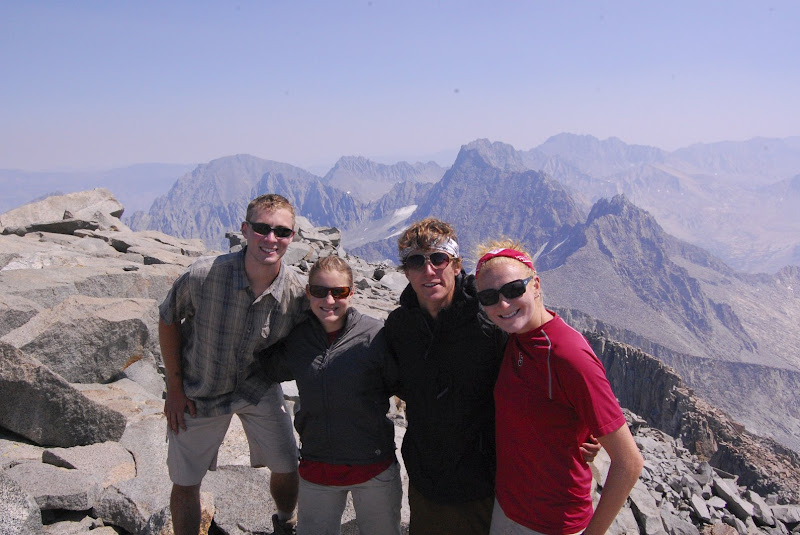 Early in September of 2008, I attempted a climb of 14,153-foot Mount Sill in the Palisade Range of the eastern Sierras. About one year prior, I had tried the climb but was turned back on the second morning by inclement weather and ill health. On that trip I climbed Mt. Agassiz instead. This time I was determined to make the summit with my three friends, Kate, Whitney, and Ian. 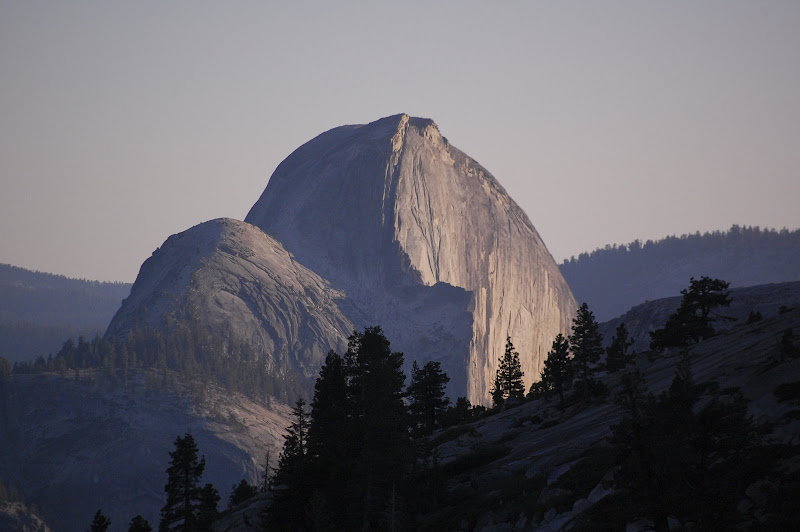 Half Dome in Yosemite

Reaching the eastern Sierra from the Bay Area is difficult. We weren’t planning on hiking anywhere the first day, so we took our time on the drive, stopping at a few points along Yosemite’s Tioga Road to enjoy the sights. We pulled into the town of Bishop late that evening and spent the night in a hotel. 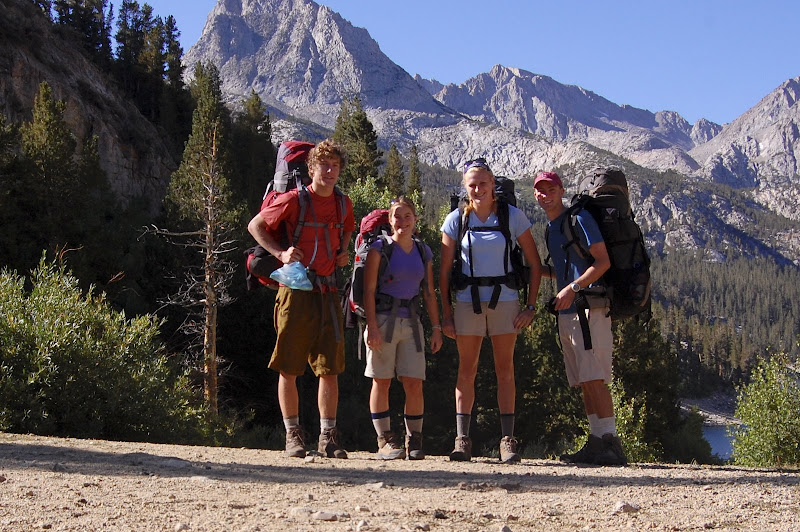 All four of us at the trailhead

The next morning, we drove to the ranger station in Bishop to pick up our permit and then drove another three quarters of an hour to the Bishop Pass Trailhead at South Lake. We started hiking at about 9:30, and we cruised up the trail despite the high altitude. After a brief lunch at Bishop Pass, we descended into Dusy Basin. We crossed the basin to its southeast corner and made camp near a beautiful alpine lake. 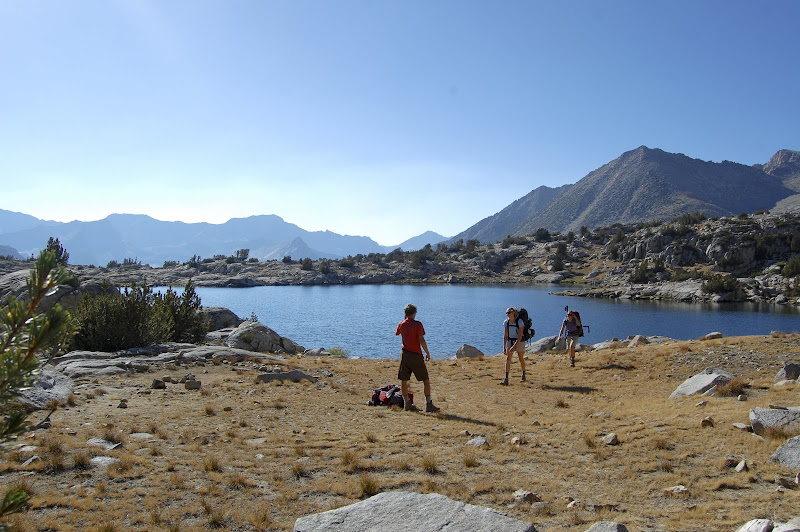 A lake in Dusy Basin

We swam in the lake (Ian and I very briefly, Kate and Whitney for much longer) and then cooked a dinner of chicken, gravy, and mashed potatoes. That first night was very cold, and we spent it outside under the stars. In the morning, we cooked an oatmeal breakfast and began the next leg of our journey.

At Dusy Basin, the trail we had followed from South Lake turned south, away from Mt. Sill. The rest our journey would be all off-trail, and our first navigational challenge was to cross Knapsack Pass. To avoid losing altitude, we climbed the north side of the slope up to the pass, which turned out to be a mistake. The north side of the slope was composed of large talus that forced us to move very slowly, and we did not reach the pass until late that morning.

Upon reaching Knapsack Pass, we noticed a well-defined use trail that led down the east side of the pass. The trail led us beneath Columbine Peak and down to the southwest Barrett Lake in Palisade Basin. We ate lunch at the lake, and then hiked across Palisade Basin to its northeastern corner. 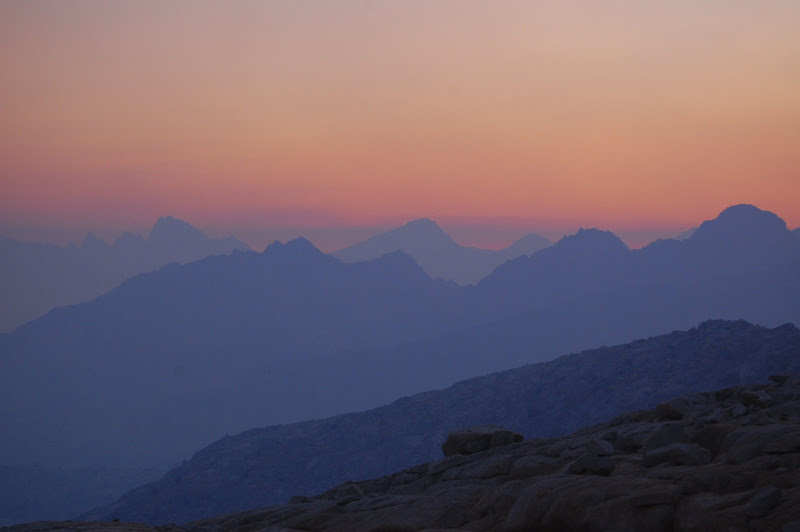 The view from Palisade Basin

We followed a small creek up out of Palisade Basin towards Potluck Pass. About 400 feet below the pass, we made camp at a small lake beneath the strikingly jagged peak of North Palisade. That afternoon, the winds had blown in smoke from a nearby wildfire. The smoke turned the sky into a gray haze, but made for a spectacular sunset. After a dinner of pita pizzas, we went to bed early so we would be rested for the long climb the next day. 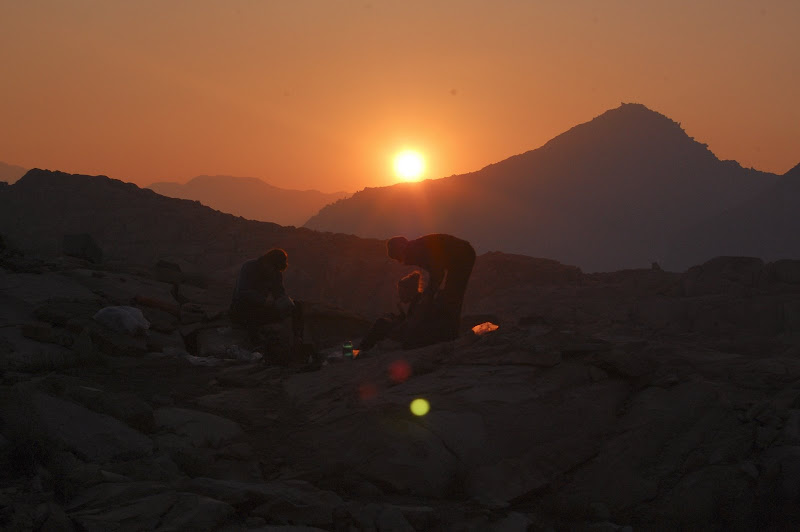 At 6 o’clock the next morning we forced ourselves to leave the warmth of our sleeping bags for the cold morning air. We breakfasted quickly and began an easy climb to Potluck Pass. Unfortunately, the eastern side of Potluck Pass turned out to be a very steep descent. At first we tried to stay high and traverse from the pass around to the valley that led to Mt. Sill. We were thwarted by some patches of at least class 4 climbing that I would not have attempted without ropes.

Returning almost to the top of the pass, we tried to trace a poorly-demarcated descent route marked by intermittent cairns. The going was difficult, probably class 2-3. Finally, we reached a creek at the bottom of the pass and began ascending the glacier-carved valley that would lead us to the summit.

The valley was a mixture of talus and scree, and made for slow, difficult hiking. Eventually we reached a ridge beneath the highest point that we could see. After spending a long time scouting the route ahead, Ian determined that the peak we could see was a false summit—we had not gone far enough east before beginning our ascent.

We pushed on up the valley, and we reached the cirque beneath Poleonium Glacier, which lies north of Polemonium Peak, between its summit and Mt. Sill. A number of route descriptions had informed us that the easiest (class 2-3) route up Mt. Sill was to climb the southwest slope to the west ridge and follow the ridge to the summit. Upon reaching the ridge, however, we found that there was no easy way to the summit. The last 30 or 40 vertical feet involved some difficult and exposed class 4 climbing. 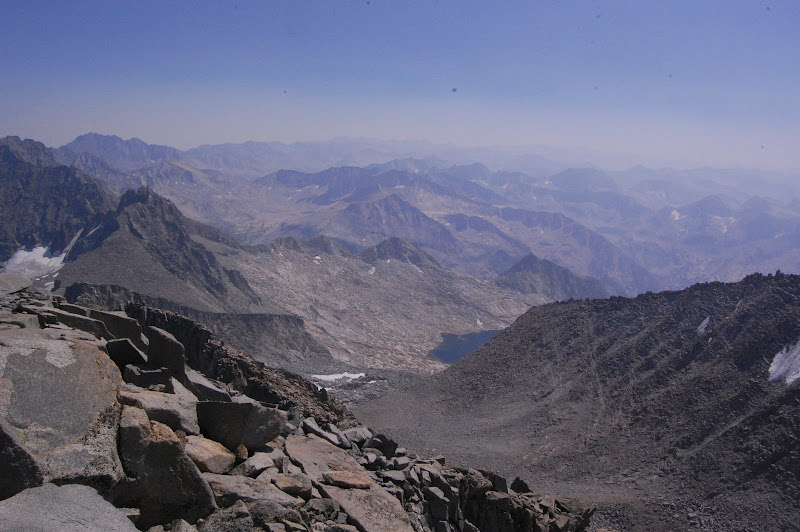 The view from the summit

By around 2 PM, we were all standing on the summit. We high-fived, took pictures, signed the register, and ate a small lunch. The views were stunning in every direction; to the south lay the jagged peaks and ridges of the Eastern Sierras. To the west was the Palisade Glacier, and more peaks lay to the east and north. The smoke and haze from the fire had blown out again overnight, so most of the sky was clear. Then we began our descent, trying a route just east of the summit block that looked easier than our ascent route. Our instincts were correct, and the descent route did not require any downclimbing. It was a long class 2-3 scramble down medium-sized talus and some shifting scree.

We followed the valley back down to the creek below Potluck Pass and ascended the pass by the same route we had used to descend earlier that day. From the top of the pass, we followed a gentle slope down to our previous night’s campsite, which we reached around 6 PM. We ate a delicious dinner of macaroni and cheese and then collapsed gratefully into our sleeping bags. 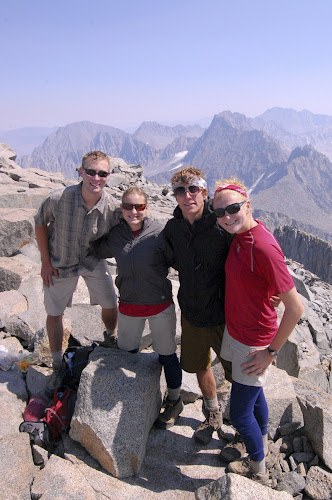 On the final morning of our trip, we broke camp early and descended to the Barret Lakes in about an hour. We picked up the trail from Knapsack Pass, and we reached the pass in another hour. The descent went very smoothly because we stayed further south and avoided the talus to the north. Tracing our way through Dusy Basin, we caught the Bishop Pass trail and returned to the pass at about 12:30 PM.

Descending from Bishop Pass, we ate lunch at Bishop Lake. Another few hours took us to the trailhead, and we piled into the car for the long drive home.

Previous Half Dome
Next Mount Silliman