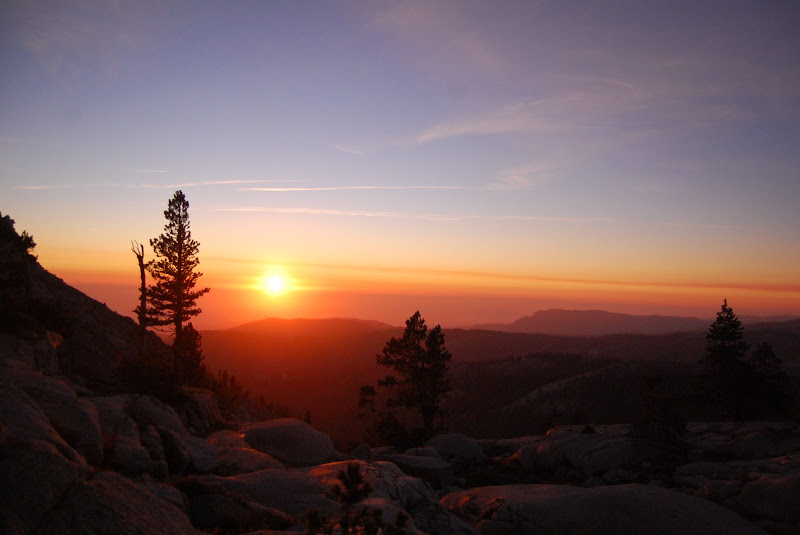 In late October of 2008, I led an attempt to climb Sequoia National Park’s 11,188-foot Mount Silliman as part of the Outdoor Education Program. We left Stanford on Friday evening and arrived at Lodgepole campsite a little after midnight. Mount Silliman is in the same area as a peak I climbed last spring, Alta Peak; Silliman lies a few miles to the northwest. We went to sleep almost as soon as we arrived.

Saturday morning dawned beautiful and sunny. We had a pancake breakfast and then drove through the campsite to the trailhead (the trail for Silliman lies in the eastern part of Lodgepole campground). For the first two miles, we followed a trail up to the north of the campsite. At about the 2 mile mark (where the trail meets Silliman Creek), we turned east, following a use trail that paralleled the stream. The trail wound its way to a meadow below a striking 10,000 foot peak. We took a break in the meadow and did a navigation workshop with maps and compasses. 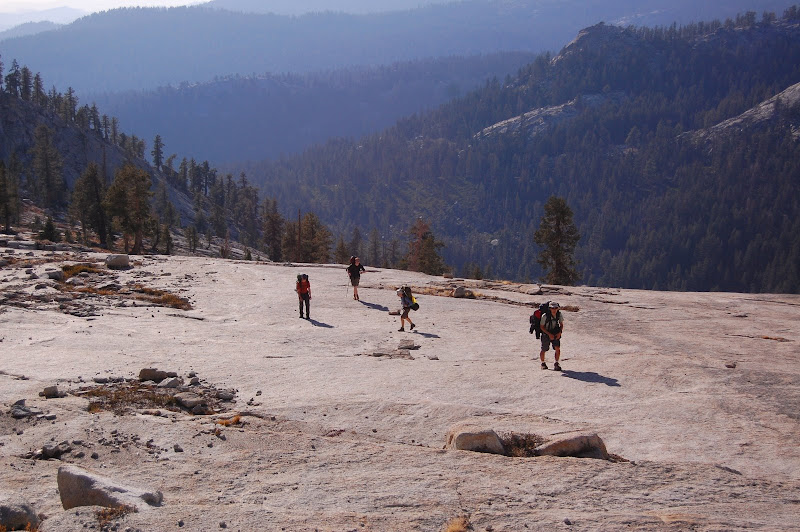 The granite slabs below Lake Silliman

About half an hour after we left the meadow, the trail petered out into a small meadow below a ramp of fairly steep granite slabs. We ate lunch and refilled water bottles on the western side of the meadow. Then we began a slow ascent of the slabs, beginning by following a gully along their right edge. As we ascended, we also traversed the slabs to the north. By 5:30 we reached Lake Silliman, a gorgeous alpine lake surrounded by sheer mountain walls. We set up camp in a obvious site on the lake’s western shore. Dinner was a delicious curry, which we ate while watching a spectacular sunset. 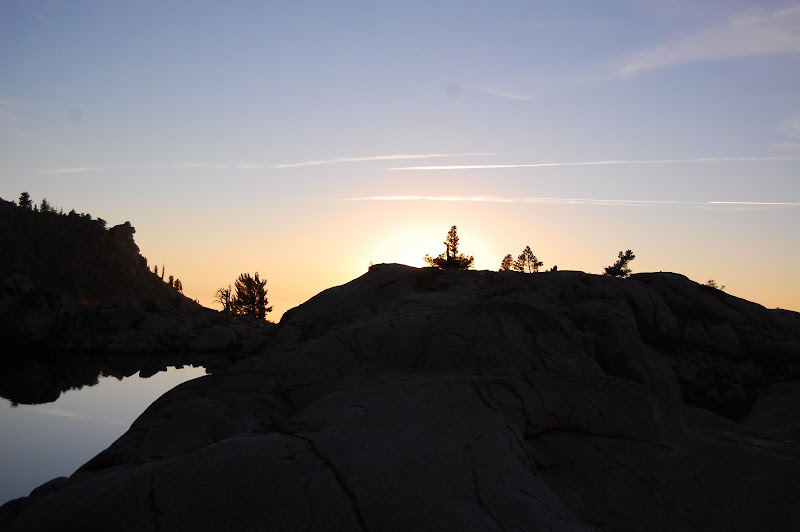 Unfortunately, one of our students had contracted moderate altitude sickness. She was vomiting and felt weak and nauseous. However, she was able to eat some rice for dinner, so we decided not to descend. We determined that if she did not exhibit improvement by the next morning, she would descend with one instructor while the other two instructors would take the rest of the group to the summit. 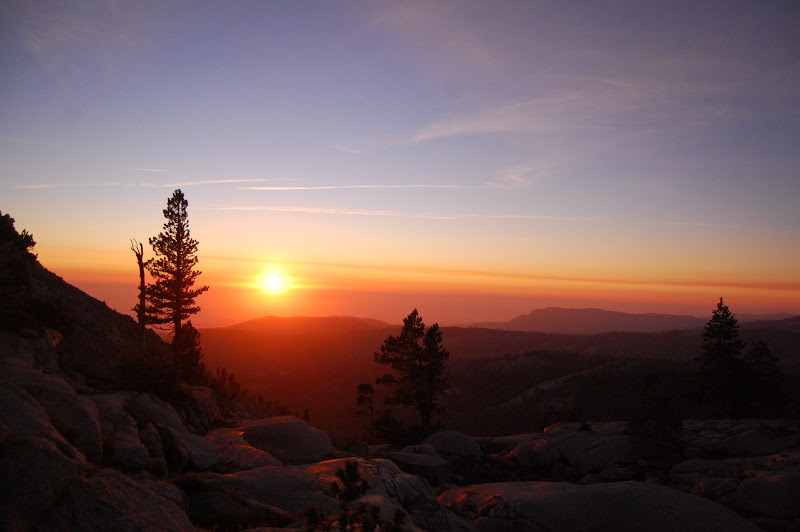 The next morning we awoke at 6:15 and ate a quick oatmeal breakfast. Our student who had taken ill the night before was still feeling sick, so she and one of the other instructors slept in while the rest of us left for the summit. We planned to meet at our lunch spot from the previous day, which was at about 8,000 feet, 2,000 feet below the lake. With that decided, the rest of us set off for the summit. 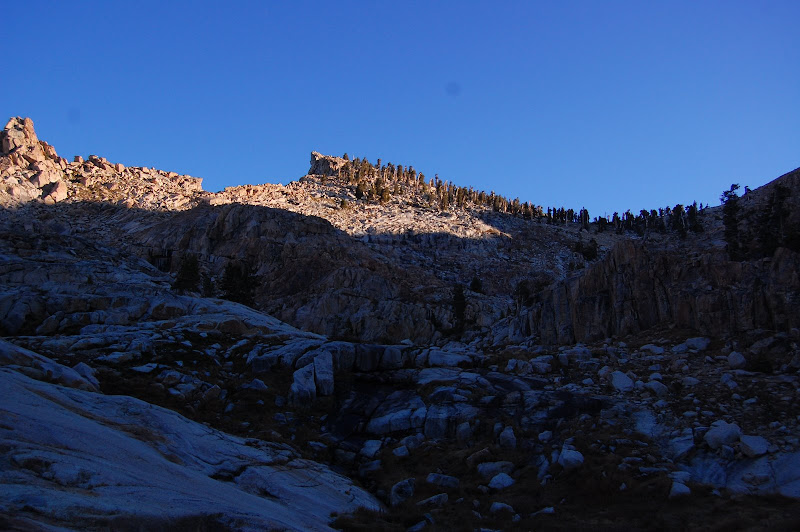 We climbed northwards from the lake, winding our way up and following a creek that fed the lake. After a short distance, the route flattened out and we got our first clear view of the summit, a very distinctive promontory to the northwest. We circled around to the west of the summit and followed an easy class 2 scramble towards the peak. About an hour after leaving camp, we all stood on the summit. 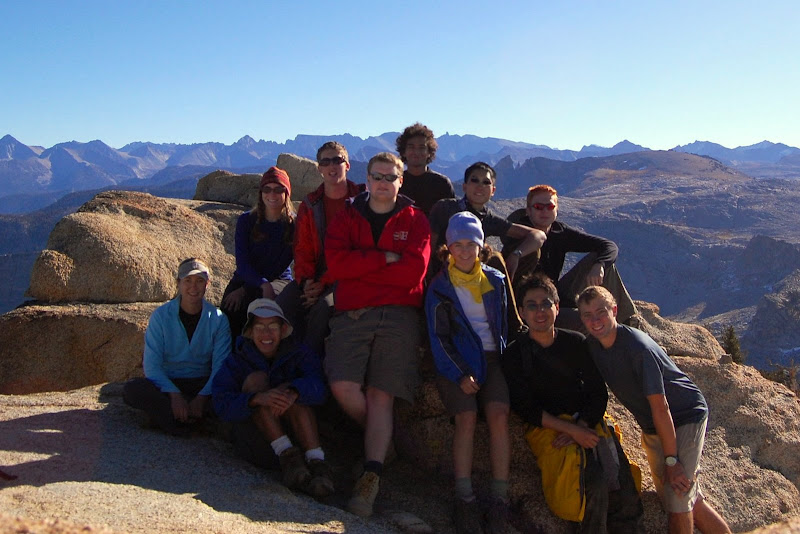 The summit of Mt. Silliman boasts incredible views of the mountains and forests of Sequioa. It also has a register and USGS marker, and it’s big enough for a large group to sit together comfortably. We remained on the summit for about half an hour, then returned to camp in less than forty-five minutes. After a brief break, we began the descent of the granite slabs to our lunch spot, where we met up with the rest of the group. 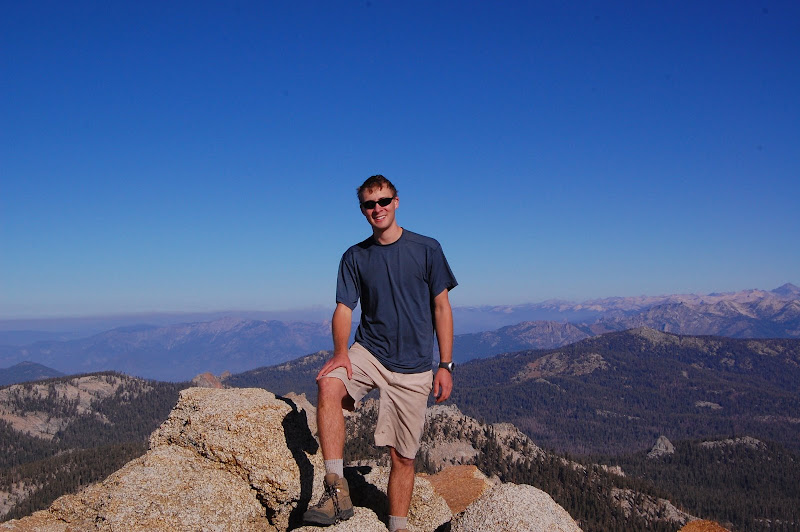 From there it was a fairly short hike back to Lodgepole. We piled into our cars, took a brief detour to the General Sherman tree, and then drove back to campus.